As they do every year, the Quality Deer Management Association has released their annual whitetail report. It’s a free to download resource that is jam-packed with insights into deer and deer hunting related data, harvest trends and current events. As always, it’s a very interesting read.

Right out of the gate, one of the first things you’ll see is that in 2016 (the most current fully reported year of data available) buck harvest is up 4% year over year, which was a continuation from the 3% increase the year before. Seemingly good news, given some of the concerns we had a few years back about declining deer herds and harvest. On the other hand though, doe harvest for the year was down 11% from the five year average, and has declined 19% over the past 10 years. 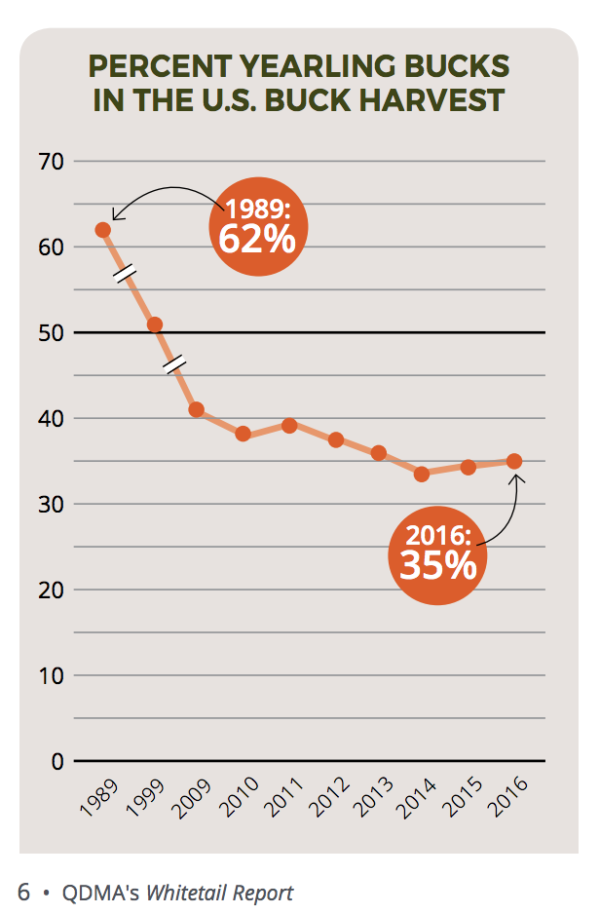 Another bit of data I noticed was related to what percentage of the nationwide buck harvest was represented by 1.5 year old bucks. Since the late 80s this number has steadily been declining from a high of 62% of the overall harvest in 1989 to a low of 33% in 2014. But since that point, the number has creeped up a bit – up to 35% now. I’m guessing this isn’t a reversal of the trend, but rather a plateau point – as we might be reaching a natural floor as far as 1.5 old buck harvest, which seems to be leveling out at about 1/3 of the annual harvest. Unfortunately, my home state of Michigan continues to be included in a bummer of a Top 5 list, that being the Top 5 states for yearling buck harvest. 47% of the bucks killed in Michigan are 1.5 olds!

Other highlights of the report include further data on deer harvest – such as antlerless harvest totals and age structure, and harvest by weapon type, an in-depth look at the latest on deer disease across the country, changing hunter participation numbers, antler point restrictions, state management strategies and much more. I highly recommend checking it out.

8 Reasons Why You and I Love Whitetail Deer

I love whitetail deer. I love watching them and studying them. I love hunting them and eating them. I love knowing they’re nearby, but also far away. I love figuring them out and I love them fooling me more often. And as I write this, I realize this paragraph could just go on and on and on – there are so many ways in which I admire and enjoy these animals. But if you’d allow me, I’d like to expand on this all just a bit more. Because I’d bet that...

How the Sun Effects Whitetail Behavior

Craig and Neil Dougherty provide excerpts and insight from their newest book “Whitetails: From Ground To Gun–A Guide To Hunting and Growing Mature Whitetails.” You can’t understand deer hunting without understanding land. Deer are inextricably linked to the land they inhabit. Land determines how a deer will spend his time, how he will stay alive, and whether or not he will realize his genetic potential. Land also determines how deer move, where...

“What is the best food plot to plant“? Everyone wants to know what is the secret food plot seed thats going to magically make big bucks appear and will lead you to putting giants on the wall every year. Unfortunately though, there is no such such food plot, seed, or forage out there. There is no one size fits all option, there’s no quick fix, and there’s no single best food plot! There just isn’t. Food plotting is a game of circumstances. The...