Every week this fall, I’ll be providing updates on whitetail buck movement for the entire country. These reports are based on intel from whitetailers in each region and my own observations as a traveling deer hunter. For more info like this, subscribe to the Rut Fresh Radio Podcast and Whitetail Weekly Newsletter. Rut Fresh Reports are powered by onX.

The lockdown phase occurs when a buck finds a willing doe in estrus. Many hunters imagine a two- to three-day window where buck movement shuts down and that bell curve takes a steep drop from its peak. GPS collar deer studies show that this isn’t the case though.

“I think some hunters put a human spin on their explanations for deer behaviors, and in their story a buck finds a doe and goes into the honeymoon suite for a few days,” said Andy Olson, a researcher at the University of Georgia, in an interview with QDMA. “During peak rut, these deer were just crazy. They were all over the place.”

The reality is that movement by a specific buck might halt for a few hours this time of year, but it’s not on a scale that should be noticeable by hunters. So, get out there and hunt. This is still the rut, and anything can happen. For much of the whitetail range, these next seven days provide the best movement for the rest of 2021.

Here’s how each region breaks down for the coming week.

East My contacts in the East said buck movement has been awesome over the last five days. It’s been a circus of chasing, fighting, and breeding, and it’s likely to continue into the weekend. They also said scrapes have gone cold but rubbing activity has increased. This is on par with what you’d expect this time of year.

Bucks will definitely be traveling at midday this weekend with the approaching cold front. If you’re looking to kill a lunchtime cruiser, read our article on the three best spots to deer hunt at midday during the rut. Nearly every property, public or private, will have one of these three places where you can hang a stand. And as an added bonus, you can identify a lot of these spots using aerial maps like onX. Midday movement only happens for mature bucks about 10 days a year, so don’t miss this opportunity.

South The “northern” part of the South is currently in the seeking and chasing phase of the rut, meaning that peak rut is still about a week or so away. With a favorable cold front that will bring a 40 degree difference between Thursday’s high and Friday’s low for portions of the South, movement should be strong this weekend. Plan for buck movement to be happening outside of their normal crepuscular hours, as well as scrapes and rubs to be active.

The “southern” part of the South is mostly in some form of pre-rut. Scrapes are equally relevant there, as well as food sources like acorns and ag. It’s best to make calculated strikes close to buck beds right now, waiting for cold weather to get bucks on their feet or precipitation to wash away scent. Bucks are still nearly a month out from losing their minds in portions of the South where the rut doesn’t peak until December and January. 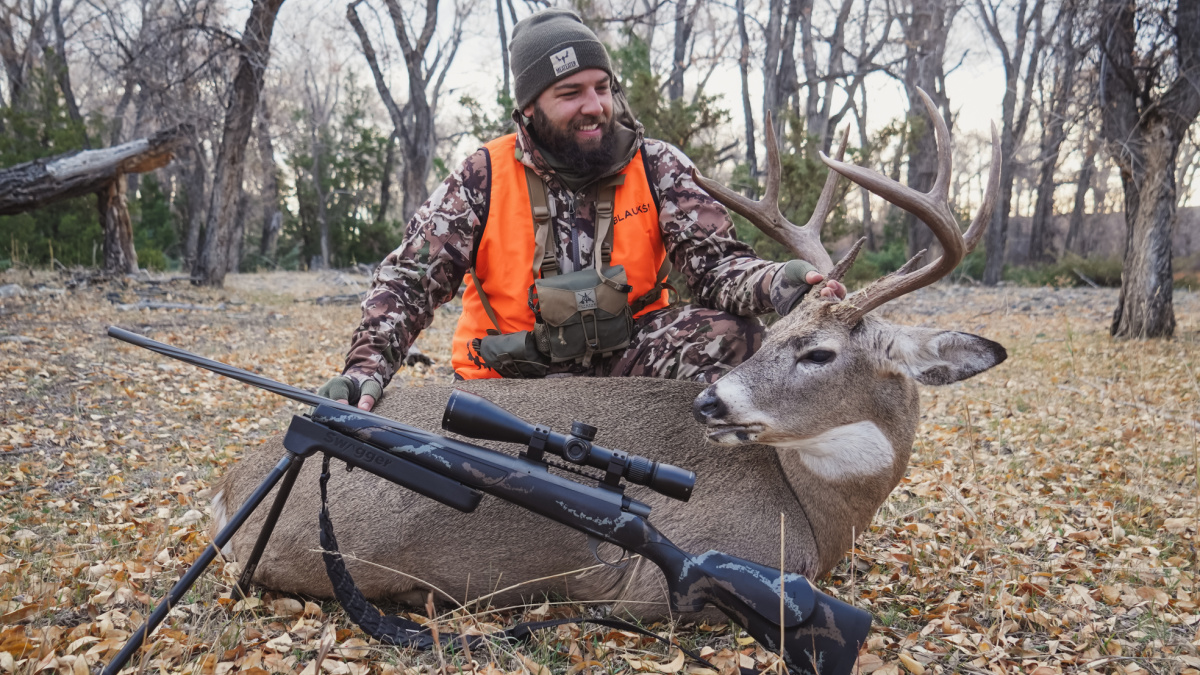 My Montana buck from last week.

Midwest Deer movement has been at an all-time high since the weekend and bucks have been as killable as they’ll be all season. The reason? Well, historically November 7 to 10 are the best days of the rut. When you combine that with the fact that crop harvest is wrapping up and the weather hasn’t been too extreme, it makes for stellar rut action.

This great movement will continue for the next week or so as a cold front descends on much of the region. I’d wager to say that these last five days and next five days will be the best of the season. Bucks are going to be cruising looking for does, so do your best to find the females this weekend. Expect to see deer of all ages visible at all hours between now and our next Rut Fresh Report.

West While some parts of the West will have a fresh blanket of snow for this weekend, other portions will be seeing extremely high winds. Use both of these weather events to your favor. If you’ve got snow on the ground, look for recent beds, fresh rubs or scrapes, and heavily used trails coming into ag fields. If you’re hunting in 30+ mph winds, read Tony Peterson’s recent article about what this does to deer movement.

Don’t overlook any bit of cover on the landscape this time of year. If a doe is hot and a buck finds her, they might bed down in overgrown fence rows, small islands of trees, farmyard shelterbelts, trashy cut corn fields, spots where irrigation pivots can’t reach, ditches, or sloughs. I killed a buck in Montana on November 3 and a buck in Wyoming on November 5. In both instances, the bucks just cared about being where the does were. That primal instinct is only going to intensify this weekend, so if you can find a group of does, there should be antlers lurking nearby.

Save this product
onX
onX Hunt App
Our favorite GPS / mapping app for your phone. A must-have for hunters and anglers.
Save this product
Tethrd
Phantom Tree Saddle Kit
$402.99
If you are looking for a nimble and effective way to hunt deer this fall, the Phantom Saddle Kit is the ticket!
Save this product
Weatherby
Vanguard MeatEater Edition Rifle
$999.00
Steve and the MeatEater Crew designed this rifle in partnership with Weatherby to create one of the best hunting guns on the market.
On Sale
Save this product
First Lite
Whitetail Catalyst Bib Pant
$182.00 $260.00 -30%
Built to withstand a lifetime of hard use in the whitetail woods, the Whitetail Catalyst Bib Pant will become your go-to from the season opener 'til the leaves begin to fall.
Get the latest in your inbox
Subscribe to our newsletters to receive regular emails with hand-picked content, gear recommendations, and special deals.
Our picks for the week's best content and gear
For the whitetail obsessed, with Mark Kenyon
Redefining our connection to food, with Danielle Prewett
Your one-stop for everything waterfowl, with Sean Weaver
Get out on the water with the MeatEater Fishing crew
Technical hunting apparel
Purpose-built accessories for hunting and fishing
Quality elk, turkey, waterfowl, and deer calls
Privacy Policy

Every week this fall, I’ll be providing updates on whitetail buck movement for the entire country. These reports are based on intel from whitetailers in each region and my own observations as a traveling deer hunter. For more info like this, subscribe to the Rut Fresh Radio Podcast and Whitetail Weekly Newsletter. Rut Fresh Reports are powered byonX. Thanksgiving is my favorite holiday, but not because of the turkey, football, or Black Friday...

Every week this fall, I’ll be providing updates on whitetail buck movement for the entire country. These reports are based on intel from whitetailers in each region and my own observations as a traveling deer hunter. For more info like this, subscribe to the Rut Fresh Radio Podcast and Whitetail Weekly Newsletter. Rut Fresh Reports are powered by onX. For a lot of whitetail hunters, the secondary rut is one of those things you often hear about...