How to Scout and Hunt Public Cattail Marshes

If you read popular hunting magazines or watch the Outdoor Channel, you’ll often hear about how folks hunt over food plots, ag fields, or funnels and pinch points in the timber. As effective as those kinds of spots can be, in highly pressured public grounds they can be hard to come by and often times not as practical to hunt. The public land hunter instead must search out locations that mature bucks feel safe, and that means cover. Lots of it. A perfect example of this kind of cover on public lands are cattail marshes.

As many of you know, there are cattail marshes scattered all across the Midwest and I’m sure in many other parts of the country as well. Marshes are often public land because it’s unwanted land which can’t be planted or built upon. What’s bad for farmers or builders is great for whitetails, as these cattails make for a great hiding place. Bucks can live to an old age and grow big racks in these kinds of areas because it is very difficult for hunters to effectively kill large numbers of bucks doing gun drives or other common tactics.

That said, how can the smart hunter effectively scout and hunt public land cattail marshes to kill those wiley old bucks?

It’s All About The Bedding I think the biggest reason hunters fail at hunting public land is because they watch too many hunting shows and read too many magazines that all seem to revolve around rut tactics. I say this for a couple reasons. First of all, the rut is only a week or two out of a long season. If you’re whole season depends on this timeframe, you could be in for some serious disappointment. Also mature bucks on public land do not participate in the rut as much as young bucks do.

Yes. You can set up in funnels, near doe areas and over food sources and you will kill the occasional good buck. However, in order to consistently kill mature bucks on a regular basis you need to hunt them where they move in daylight.

Finding Buck Bedding Areas So how do you find buck beds? It’s actually quite simple, by scouting. The best time to scout for buck beds should be right when the deer season ends and this prime-time lasts until green-up. Scouting should be done after the snow melts because bucks often bed in different areas in winter and it will be hard to see beds under the snow. You want to find the beds that were used during the season.

Vast marshes often intimidate hunters unfamiliar with hunting them. They look out over the vast cattails and large adjoining blocks of timber and don’t know where to start. Cattail marshes in my opinion though are the easiest terrain to both scout and hunt. Why is this? Because deer movement and beds are typically isolated to certain (relatively) easy areas to find. 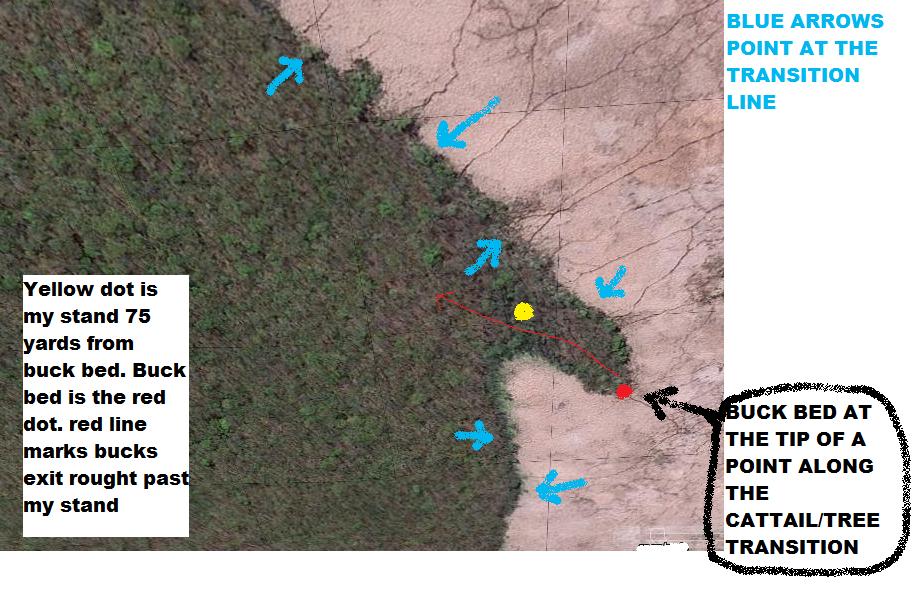 I also find buck beds where you see any type of trees or dogwoods within the cattails. Cattails can grow in water, trees generally can’t. Deer don’t bed in water. If you can locate trees or brush isolated in a cattail marsh, there is likely some high ground around that tree or brush that could support a buck bed. These can be excellent spots to find bedded bucks.

Identifying Buck Beds How do you know you’ve actually found a buck bed? There are several identifiers that can help you tell whether a bed belongs to a buck or doe. Some of the buck beds you find in a marsh will have a rub right in it, or very close to the bed. Buck beds are also typically noticeably larger. Another thing to consider is that bucks bed in a specific spot, for a specific reason. Nothing is done randomly.

Bucks bed alone and don’t like to be vulnerable from any direction. They may choose a certain spot because they can see a predator coming, smell him coming, hear him coming, or some combination of these factors. 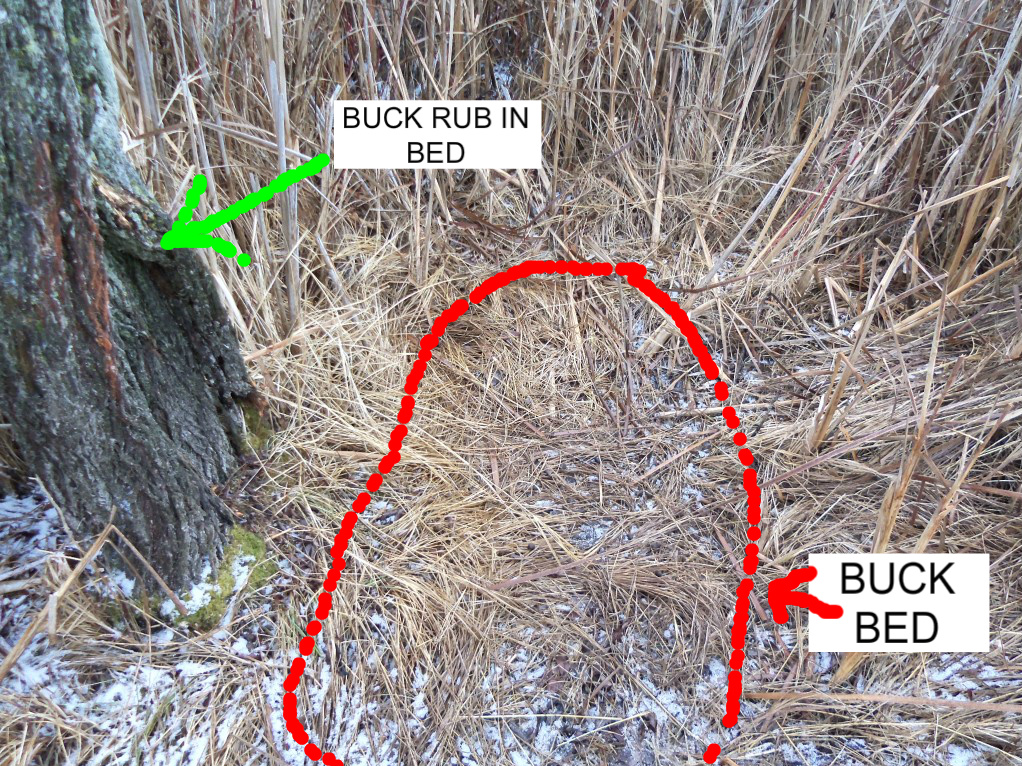 Different than bucks, does bed in groups. They like to bed in a circular fashion, with each individual facing a different direction. Does rely on each other for saftey thus the single beds appear more random and vulnerable. Some beds in doe groups will also be small as these are from fawns.

Once you Find a Buck Bed Now that you’ve found places to look for bedding areas and have identified an actual buck bed, it’s time to do some investigation. I like to study the beds very close. In fact I will sit right in the buck’s bed and see what the buck sees and think about what he can smell and hear. Once I have this perspective, I will look for the nearest spot I could hunt, just out of sight, sound, and smell along his staging route or a trail leading from the bed. I then pick out one or more trees based on different wind directions as close as possible to his bed.

I don’t come back until it’s the day I plan to hunt.

The Plan Leading up to the a season I want to find as many of these buck beds or bedding areas as possible so I don’t over hunt them. Another thing to consider is that it’s usually not one buck using a bed for just one year. Several bucks and generations of bucks use the same beds. I have killed several bucks from the same bed over a period of years.

The point is, the more you scout, the more you will find. Find these locations and hunt them sparingly and intelligently. I hunt each of these spots only one to three times a year. Anymore than that likely will not be tolerated by a mature buck

Be Mobile and Be Quiet To hunt this way you need to come up with a mobile tree stand set up that can be put up quietly within 100 yards of a bedded buck without him knowing you’re there. I personally use the Lone Wolf Alpha hang on with 4 or 5 climbing sticks.

With this set-up the climbing sticks attach right to the stand with bungees and with practice can be set up quietly. I also use a product called stealth strips that attach to the stand like very sticky tape and reduce metal contact and boot noise .

In-Season Scouting In addition to the scouting I do early in the year, I like to scout during the season by looking at food sources near known buck beds or bedding areas. When I find fresh large tracks or fresh high rubs at a food source, I hunt the nearest buck bedding areas.

I also shine fields in late summer around the public land to determine what bucks are available on each property to hunt and I set my standards accordingly (check your local laws before shining deer).

In season I can also use the shining as a scouting tool. Often if a buck is using a certain field just after dark that will tell me which beds he likely came from. Lets say there are four likely spots the buck might be bedding. I will hunt each one consecutively till all possibilities have been eliminated, or I kill the buck.

When To Hunt As I mentioned earlier, most hunting techniques revolve around the one or two week window of the rut. But by hunting bucks in close proximity to their beds I can have a much longer window of opportunity. This type of hunting has netted me good results all season. In fact, some of my best bucks were taken opening week.

Speaking of when to hunt, it’s important to note the time of day. Most of my kills that were outside of the rut were during evening sits.

In my younger days I hunted every morning and evening I had available. But I learned was that outside of the rut, most mornings mature bucks are bedded before daylight and I would kick them out when I got there well before daylight to set up.

Alternatively, I can sneak into evening hunt locations without bumping bucks and in the evenings they almost always seem to get up before shooting light fades and move a short distance. The trick is being within that short distance. 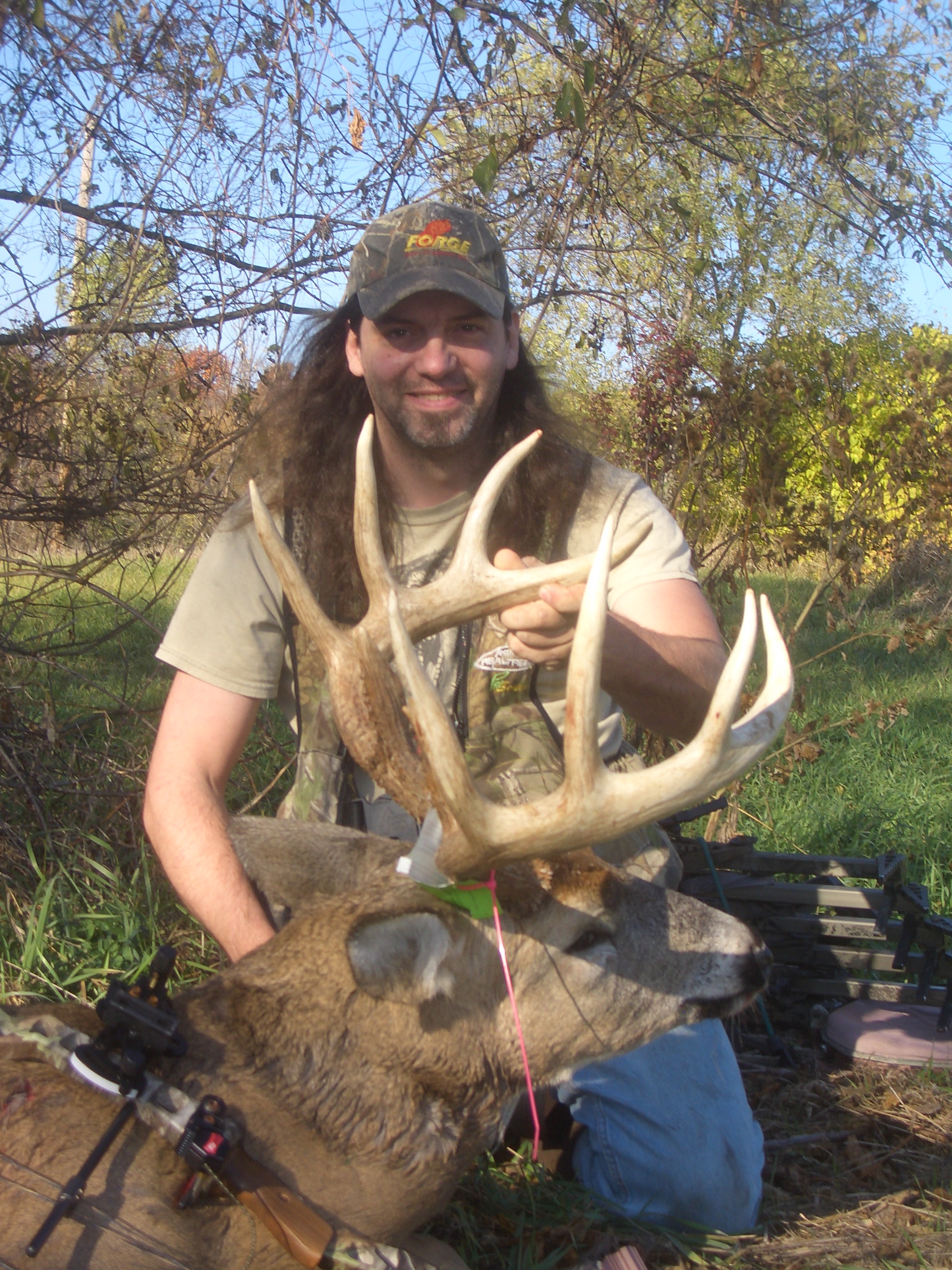 This is a buck I shot in a public marsh near my home. I hunted this buck for two seasons. He gross scores in the mid 160’s.

He was living on private ground, but would occasionally bed in the public area where I could hunt. When his rubline opened up towards the end of October I went shining and saw him out feeding. I knew where the primary buck bedding area was and as soon as the wind was right I hunted it.

I shot him the first day I hunted him. Learn to hunt cattail marshes and you too can enjoy success on public land.

How to Rattle in a Buck on Public Land

On managed properties, hunter interactions with bucks are considered non-life-threatening until the bucks reach the trophy antler or age kill criteria. After they reach such benchmarks, they have a high tolerance for human intrusions and are very responsive to hunter tactics—they’ve responded without consequence while growing to maturity. Aggressive rattling sequences used to call in mature bucks on managed properties (like the ones seen on TV...

How to Kill a Buck at Midday in October

In deer hunting (and life), it’s the false things we think are true that hold us back the most. While I could list a pile of these beliefs as they relate to deer hunting, a glaring example is the myth that there’s no reason to be on the stand during the midday hours before Halloween. We all know that there is absolutely no reason to hunt the lunch shift during the early- to mid-season, right? I used to believe that wholeheartedly—until I started...

How to Kill a Whitetail Buck in Cattails

Here's an interesting, fun fact that really isn’t relevant to deer hunting at all: Researchers have found cattail starch on Paleolithic grinding stones dating back as far as 30,000 years. This is good to know if the zombie apocalypse ever comes and you need some starch in your diet, provided you’ve got a mortar and pestle. While humans have a long history of utilizing these reedy, water-loving plants as a source of carbs, deer love them for a...