Recent research into whitetail vision confirms what you’d expect from a crepuscular prey species: They see their best during the dim light of dawn and dusk.

Bradley Cohen, the lead researcher in a 2014 University of Georgia (UGA) study, calls whitetails an “anti-predation machine.” For starters, their eyeballs are positioned in their head to provide 300- to 310-degree views of their surroundings, including about 65 degrees of binocular vision to the front. The only area they can’t see is the 50- to 60-degree cone behind them. And because they easily detect the slightest motions within their huge visual side-to-side arc, the whitetail’s eyes are more than a backup safety system.

Further, the whitetail’s eyes are most sensitive to colors in the blue-spectrum – the light that’s most available at dusk and dawn when they’re most active. Without talking too technically about rods, cones, nanometers, color spectrums, and short and long light wavelengths, we know this: Whitetails can distinguish blue from red, but not green from red or orange from red. Research also suggests deer distinguish light grays and tans better than dark reds, browns and greens.

In fact, based on UGA’s studies in the past 30 years, Cohen and his fellow researchers think deer see blues up to 20 times better than humans can. They see blues better than we see reds, which says a lot, given how well we see red-spectrum colors like blaze orange.

Still, let’s not confuse things. Deer don’t see bright orange as bright blue. Attempts to translate a deer’s likely color perceptions into what humans see makes scientists squirm. That requires some speculation, which can lead to misperceptions and unprovable claims.

“We have a multimillion dollar industry (camouflage) out there that’s based on hopes and crossed fingers regarding what deer perceive,” Cohen said when presenting his research at a recent Southeast Deer Study Group meeting. “But deer do not perceive their world anyway similar to the way we perceive ours. It’s time we realize that. A lot of the gear you see on the market isn’t geared toward deer. We need to ask whether it’s geared more at our own perceptions.”

Also complicating those perceptions are the materials used in hunting apparel. Blaze-orange caps, gloves or clothes made of soft, natural fabrics reflect far less light than those made of nylon, vinyl or cheap plastics. Those “hard,” synthetic fabrics can reflect white flashes of light in the blue-spectrum, which deer easily detect.

Follow the Tail
How important is blue-spectrum light to deer? The greatest amount of light reflected by the underside of a deer’s tail is in that spectrum. When deer flee threats with their white tail flagging, they’re waving powerful visual cues to other deer.

“If you’re running through the woods being chased by a predator, you’re darned right you want to see your mama’s or buddy’s tail,” Cohen said. “You want to stick close to mama and get one step ahead of your buddy before the predator catches up.”

Further, other researchers previously found some predator pelts reflect little light in the blue-spectrum. But because deer are especially sensitive to that light, and dusk and dawn are rich with it, Cohen thinks whitetails could be well-equipped to detect predators during their high-activity times.

Likewise, the more blue light that reflects from clothing fabrics, the easier it is for deer to spot it when hunters move. Therefore, wash your clothes with detergents that don’t use phosphates or other fabric brighteners. Also use detergents that kill ultraviolet light emitted by fabrics treated with phosphates. The UGA research found that deer see further into the UV spectrum than once believed. In one test they found that four of six camo shirts reflected enough blue light to be seen on an otherwise neutral background by the school’s captive deer.

“Deer see darker blues than we can see, and they see into the UV range, but I doubt what they see is glowing,” said University of UGA Professor Karl Miller, who oversaw Cohen’s research. “It just means they can see far into the blue-spectrum. We can see red-spectrum light like blaze orange, but we can’t see all the way to the infrared spectrum. We see further into the red-spectrum than deer, though, so they can’t see infrared light either.”

The Unknown
Researchers have learned much about the deer’s visual capabilities, but much remains unknown. One such area is if, or how well, deer can detect differences between shades of light tans and grays. Even if they can distinguish those differences, it doesn’t necessarily mean hunters should always avoid camo with light hues. Those patterns might work fine on snowy or arid backgrounds. In most whitetail habitats, however, camo patterns with darker browns, greens and blacks blend better.

Deer vision isn’t all about color, of course. UGA’s researchers hope to learn more about their ability to quickly detect and process motion near and far, and perhaps learn how they avoid hazards in split seconds while fleeing through dense cover.

“They process what they see about 2.5 times faster than humans in low light, and twice as fast in daylight,” Miller said 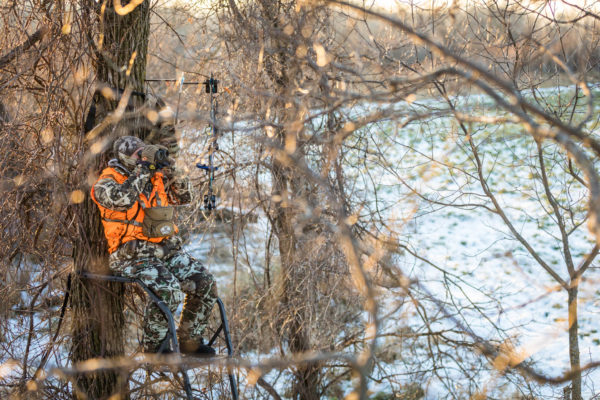 “We see fine-detailed camo prints with leaves and twigs, but fine detail isn’t important to deer,” Miller said. “You’d probably do as well with a blurry camo. That’s why deer struggle to see stationary objects, but easily see moving objects. Their eyes catch movement much better than our eyes can.”

That trade-off is tied to the deer’s superior blue-spectrum vision, and the fact their eyes lack a yellow filter to block UV and blue lights. The human retina, however, has yellow pigments to filter out those lights, and “macular” pigments to block even more. Humans need those filters because they live far longer than deer. Without it, UV light would eventually destroy our retinas.

Those filters also sharpen our vision. Consider what happens when wearing yellow shooting glasses to heighten clarity by blocking blue waves. Because deer lack those filters, blue light pours into their eyes, decreasing clarity but heightening their ability to see at dawn and dusk.

Night Vision
The deer’s night vision is also superior to ours. In fact, Miller thinks it’s least 18 times greater. That superiority starts with the whitetail’s horizontally shaped pupils, which are three times larger than our round pupils. This lets them gather nine times more light than we can.

Further, the tapetum lucidum lies more in the upper half of the deer’s retina and receives light reflected from the ground. The tapetum intensifies ground light and increases the scene’s contrast. That helps deer see greater detail from the horizon to the ground, and is yet another reason why it’s tough for hunters to remain hidden at eye level.

In addition, a human’s round pupils help us see above, below and to the sides. A deer’s oval, horizontally shaped pupils provide superior vision fore and aft from the ground to the horizon, which is where most four-legged predators lurk.

That oval design, however, isn’t good for looking above the horizon, making it more difficult for deer to spot movements from above. As their horizontal pupil narrows to reduce light intake during the day, their upward view worsens further. That’s why many movements we make in a treestand fail at ground level.

Conclusion
High, low or at ground level, a deer’s highest visual priority is detecting movement as far away and as quickly as possible. Miller suggests hunters keep that in mind when fretting about colors or the best camo patterns.

“All that hype you hear about blaze orange or ultraviolet light are minor issues compared to the deer’s ability to detect movements,” Miller said. “The bottom line is that the less you move, the harder it is for deer to see you, no matter what you wear or where you sit.”

How Mark Drury Predicts Buck Movement Based on Wind

The name Drury has become synonymous with deer hunting. Dubbed “the mad scientist” by some hunters, Mark Drury has dissected deer behavior—specifically mature buck movement—for decades. And there’s certainly a method to his madness. Drury’s smartphone application, DeerCast, launched in 2018. He says it correlates atmospheric conditions with deer movement based on 40 years of research. The proprietary algorithm can now predict deer movement with...

Each year, K.C. Smith travels from his Texas town to states throughout the country in pursuit of public land whitetails. And each year, he punches a few tags. These are his top tips for traveling whitetail hunters. Set Realistic Expectations While every whitetail hunter has dreams of tagging a 200-inch trophy on out-of-state public land, but Smith said you can’t count on such an opportunity and should adjust your expectations. “I don’t think...

Where to Shoot a Deer

Just aim for the vitals, right? After all, the anatomy of deer has stayed pretty consistent for millions of years. In fact, fossil records show that antler-shedding ancestors of our modern deer were on the scene some 15 to 30 million years ago. While they’ve gone through plenty of changes since then, the location of their heart and lungs seems to have stayed relatively static. It really doesn’t matter to us, as modern hunters, the anatomical...