How to Hunt Turkeys with a Dog

Call it heresy or a useful game management tool, but if you haven’t yet taken a wild turkey on the wing in fall you’re missing out on a thrilling, challenging way to put white meat on the Thanksgiving table. While fall turkey hunting has taking a backseat to the popular pursuit of spring gobblers in the last 50 years, this tradition has its own rich history, along with a playbook of successful strategies (as famed turkey author Col. Tom Kelly can attest).

Turkeys assemble in large flocks this time of year, maintaining much of their gregarious nature found during the breeding season. As a bonus for the fall turkey hunter, these birds adopt predictable, exploitable travel patterns around food and shelter. Add in a dog with a good nose and a thirst for the eruption of wings and you have all the ingredients for a fall turkey hunting renaissance that celebrates one of America’s greatest conservation success stories.

Fall turkey hunting is not legal in all states, and not every state that hosts a fall season allows the use of dogs. Do your research well in advance of the season, as some states issue fall tags on a lottery system. Other state agencies impose sex restrictions to protect gobblers for the spring season, while others open up just portions of the state to fall hunting.

Generally, the fall seasons exist as flock management tools, so harvest of hens is not only allowed but openly encouraged. This fact particularly applies to areas with dense populations that contribute economic damage to crops or where they otherwise earn the “nuisance birds” moniker for their willingness to endure winter around a suburban bird feeder.

Targeting hens comes with some prejudice, which as an avid spring turkey hunter I share on occasion. It’s not lost on me that hens raise those future gobblers I love hearing on the roost during the spring season. We’re not more than a generation removed from some exceptionally dark times in the history of Meleagris gallopavo, and protecting hens while populations rebounded no doubt played a large role in their laudable recovery and expansion.

However, in some places like my home state of Idaho—where wild populations of these non-native birds were introduced for sport—flocks have grown to such immense sizes that Idaho Fish and Game issues a liberal amount of inexpensive fall tags to keep populations in check.

Double check your gut, but personally I see no harm in participating in this type of conservation. It’s also a great way to ingratiate yourself with appreciative landowners who might invite you back for the spring season. 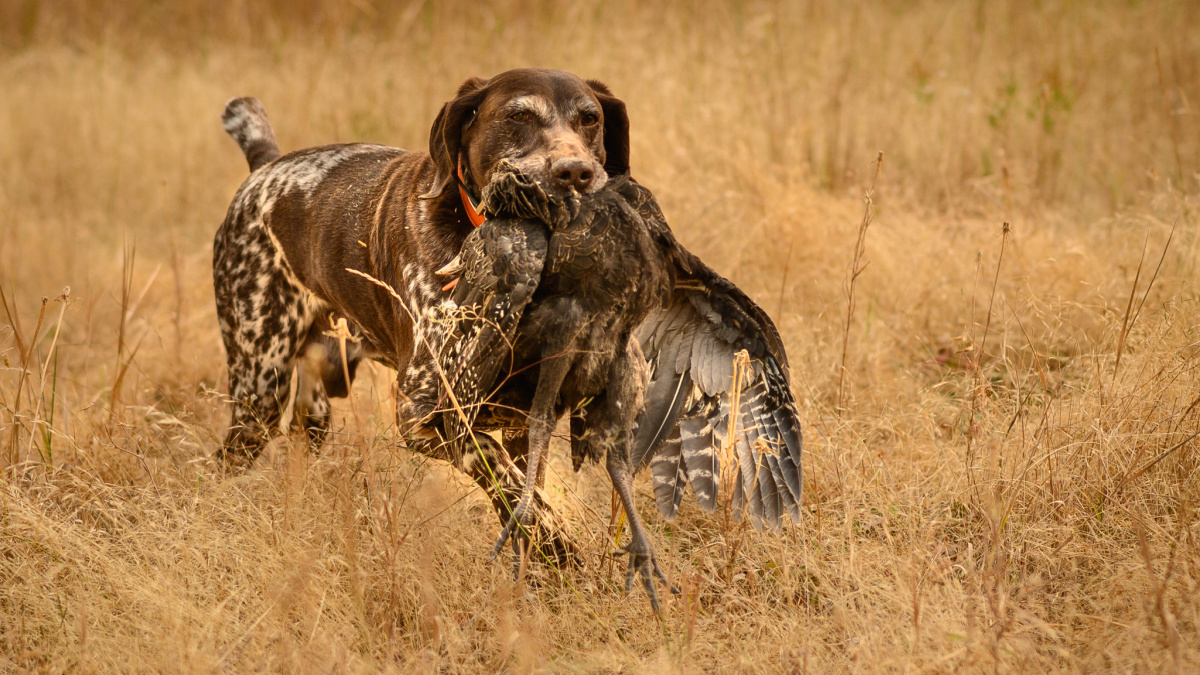 Turkey Dogs
The very first single-purpose turkey dogs started as a team of misfit bird freaks that didn’t pan out in traditional upland venues. They flushed when they should have pointed, they bayed on the chase or ranged a little too far in the grouse woods. What they all had in common was the ability to flush and scatter flocks in multiple directions and let the handler know by vocalizing in the exact spot this excitement took place. They became so adept at this task that turkey hunters eventually bred them specifically for fall hunting.

Once the birds scatter, the hunter then sits under a tree, covers the dog quietly under a burlap sack or blanket, then attempts to reassemble the flock by mimicking the characteristic kee-kee of a lost young bird or the authoritative yelp of the boss hen who is desperately trying to get the band back together.

No offense intended towards Appalachian turkey dog purists, but if you already own a bird-crazy hunting dog, you’ve got all you need to build a functional, fall flock-busting companion. Young birds in dense cover or CRP hold well for pointing dogs, particularly if they break away from the main flock. You’ll find them between water and feeding areas rich with the invertebrates that make up a large portion of their early season diet.

Turkey Training
Focus your training on obedience, utilizing a whistle-sit with natural flushing dogs to keep them from ranging too far out of gun range on running flocks. Experienced dogs will work as a team much in the way successful pheasant hunting dogs do, cutting off escape routes and pinning the flocks so they have no option but to flush.

Turks on the Wing
Even though a head-and-neck shot keeps pellets out of the meat, I try to adopt a blue-sky policy with my hunting party to avoid injuring a dog that has caught up to a running turkey. These large birds may be reluctant to fly, but on the wing they are far more graceful, athletic, and sporting than one might expect in a 15-pound relative to the dinosaurs. Their powerful flush is fodder for any adrenaline junky.

No doubt there’s a sense of victory in outsmarting one of the sneakiest game birds, but the true prize of the fall turkey hunting experience is a succulent young bird on the table. Not only are they tender and flavorful, but the meal represents a victory in the long-fought battle to protect America’s bird. With the help of hunters and conservation groups, the wild turkey has charged back from the brink of extinction to the point where conscientious fall harvest has become part of their management. That’s something all hunters can be thankful for.

Save this product
MeatEater x Phelps
LINE 1 Turkey Pot Call
A limited-edition heirloom pot call made from a Kansas Black Walnut tree felled by Steven Rinella and Jason Phelps. This is a limited run product, each is stamped with a sequential number that marks the order in which it was finished.
Save this product
Phelps
MeatEater X Phelps Box Turkey Call
$87.99
This box pairs a beautiful purpleheart lid with a solid walnut body designed for creating raspy old hen sounds that will pull a wily old tom right into your lap.
Save this product
Phelps
MeatEater X Phelps Turkey Call 3 Pack Diaphragm
$34.99
A killer 3-pack including Steve Rinella's signature Jake Brake, Janis Putelis' signature Latvian Eagle and The MeatEater Loud & Clear.
On Sale
Save this product
First Lite
Phantom Leafy Suit Top
$72.00 $90.00 -20%
Helps you disappear when you get close to your quarry.
Get the latest in your inbox
Subscribe to our newsletters to receive regular emails with hand-picked content, gear recommendations, and special deals.
Our picks for the week's best content and gear
For the whitetail obsessed, with Mark Kenyon
Redefining our connection to food, with Danielle Prewett
Your one-stop for everything waterfowl, with Sean Weaver
Get out on the water with the MeatEater Fishing crew
Technical hunting apparel
Purpose-built accessories for hunting and fishing
Quality elk, turkey, waterfowl, and deer calls
Privacy Policy

Fall turkey hunting gets no love, except from a few hunting outcasts who either run turkey dogs or just want to be contrarian. In my home state of Minnesota, fall license sales usually tally up to roughly 15% of spring sales. Spring is where it’s at for turkey hunting, and persuading folks to give the fall birds a real shot is usually a lost cause. But I’m going to try anyway, on the grounds that working birds now will make you far more lethal...

While the average weight of a fall turkey is below 15 pounds, a bird of that size will consume roughly five pounds of food each week. That doesn’t sound like much, but fall turkey flocks balloon in size this time of year. On the small side, a flock of just a dozen birds will vacuum up 60 pounds of food each week before winter, and they don’t take kindly to rival birds homing in on their calories. This territoriality is what makes fall turkeys...

How to Pattern Turkeys with Trail Cameras

It feels weird to talk about turkey scouting. After all, a pile of longbeards are killed every spring by folks who set out from the truck in the morning with zero intel and no real plan. There isn’t a huge need for the big-country, run-and-gun crowd to engage in much turkey recon, but for plenty of turkey hunters, there is. If you bowhunt from a blind, have plans to take a few youngsters out, or are relegated to small properties where the burnout...