The Legend of Col. Tom Kelly

Nowadays, 93-year-old Colonel Tom Kelly lives on the 11th floor of a high rise surrounded by the urban sprawl that is Bethesda, Maryland. Outside his apartment there are strip malls, chain restaurants, traffic jams and one of those guys on the corner spinning a sign advertising half-priced furniture.

His life here seems as small as his apartment and as hollow as the rooms within it. It is the embodiment of the changes most folks encounter at his age. Two years ago, following the passing of his beloved wife, Tom moved out of his longtime Alabama home and into this colorless concrete building to be closer to his daughter and her family.

“They want to keep tabs on me,” he said with his trademark Southern drawl. “There’s a whole lot of trouble I can get into on my own these days.”

Right now, the biggest immediate issues for Tom are the malfunctioning ice machine in the kitchen—it churns violently before throwing ice cubes without warning—and getting to the bathroom on time. Of course, both of these troubles play nicely into his sense of humor and provide punchlines to lighten up even the most serious conversation.

Despite living alone for the first time since he was in his 20s, and being plucked out of where he was planted for the bulk of his life, Tom is bright and full of the spirit that made him turkey hunting’s poet laureate. This sparsely furnished apartment might not have many stories to tell, but its occupant is full of them.

“I can still hunt with that thing,” he said, motioning toward a wheeled walker leaning up against the wall. “I can’t drive a car, I had to give it up, but that’s my ticket into the woods, I think.”

Whether that’s in the tangible sense or just in his mind, it’s clear that the Colonel is never far from the turkey woods. His connection to this great bird and the folks who chase them was long ago etched in stone. This lean, genteel old man is a cache of turkey hunting stories that span over 80 years and go well beyond the 25 books he authored on the subject. Those books, especially his hallmark The Tenth Legion, have a cult-like following similar to that of Robert Ruark on Africa or Nash Buckingham on waterfowl.

To read Tom’s description of a morning in the turkey woods is to explore what it means to be a hunter. He so accurately depicts the novice arrogance, the shame in defeat, the ponderance of nature and the minutiae—a pure hatred of sticker bushes and the insanity of waking up at 3 a.m. among them.

“I don’t care how much you’ve done it or how good you are at it, one of those birds is going to make you look real dumb,” he said. “If you get too much confidence, he’s going to break your neck with it.”

His words can stoke the soul of a turkey hunter. They also have the unique ability to describe the depth of it. 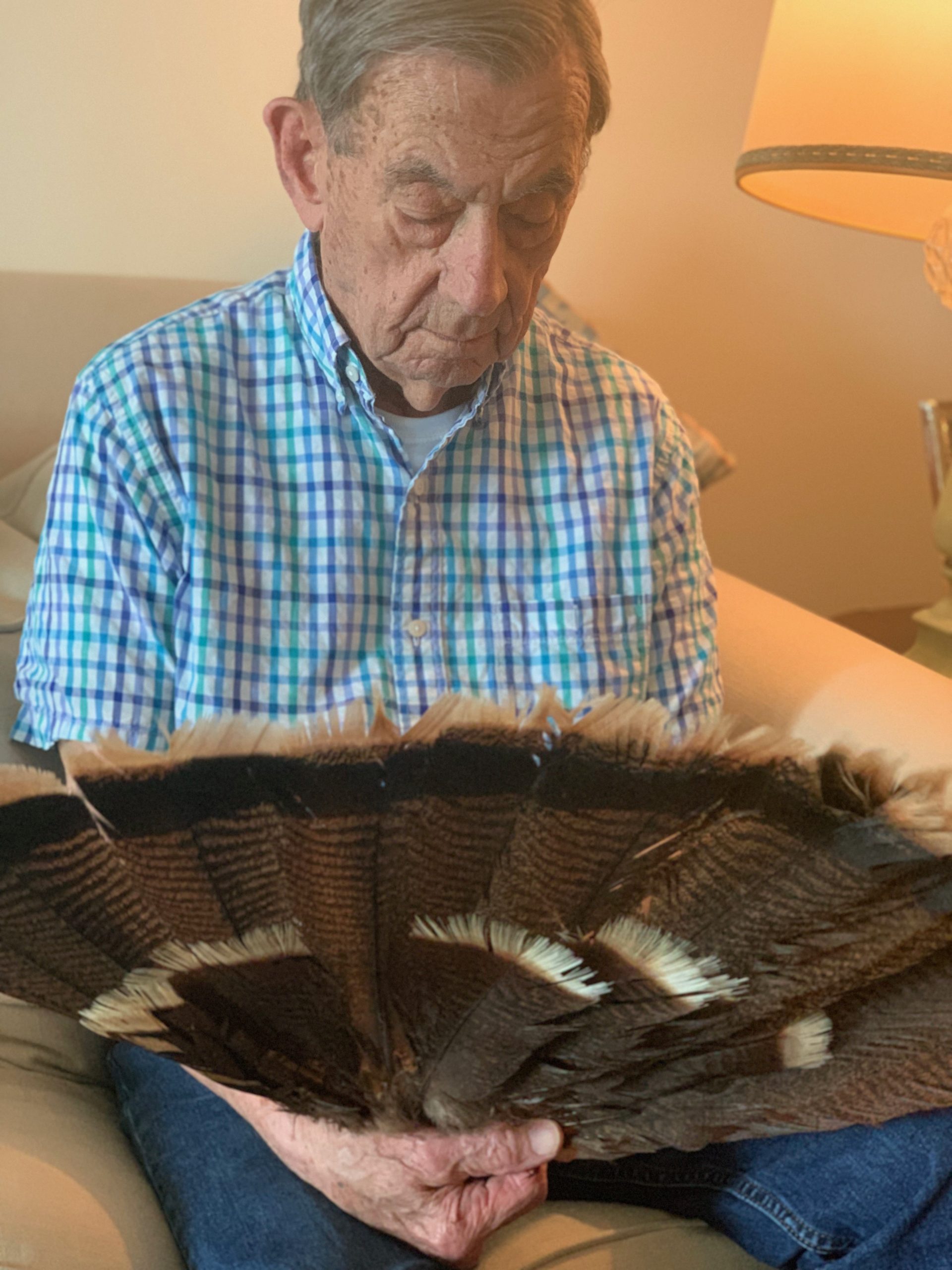 The Legend
Tom was born on May 15, 1927, in Mobile, Alabama, and quickly became just about the most typical Southern boy you’d ever met. He played the banjo, loved to read and never wanted to go back inside.

“I was born in south Alabama, and the early years were about running around outside,” he said. “But mostly I remember the people, my friends and family. They defined my life.”

Tom’s first hunting experience came at age 11 with his uncle. At the time, there just weren’t that many turkey hunters or, for that matter, turkeys in the hills or swamps of Alabama, so it may have seemed like a strange pursuit to some. It was a novel thing to see a bird, not to mention calling one in and killing it. On Tom’s first “successful” hunt, he accidently shot a hen. He still wonders about the statute of limitations on his mistake.

“From there I was hooked,” he said. “It was over for me. I didn’t care about hunting anything else but turkeys. It was damn near all I thought about.”

To further his passion, Tom entered Alabama Polytechnic Institute, which later became known as Auburn University, to study forestry and find a way to be outside as much as possible.

His education was quickly interrupted by war. Tom left API shortly after he arrived for a tour as an aerial gunner for the U.S. Navy. He never saw combat but “sure did love being with those boys.”

He returned home in 1946 with the idea that he’d step up if ever called again. The now 20-year-old Tom was determined to dive back into studying forestry. He graduated with honors in 1949.

Only two years later as the Korean War began in earnest, Tom joined the U.S. Army, this time as an artillery specialist. He eventually earned the rank of bird colonel, though some have wondered whether he used the moniker to describe his leadership of The Tenth Legion.

“A lot of folks in the South go by ‘Colonel,’” he said with a chuckle. “It’s part of the culture down there. No, I actually was given the rank, so it’s real for me.”

But Tom could never stay too far from Alabama. In 1953, after working several different jobs in forestry, he took a position with the Scott Paper Company in Mobile and remained there for the next 40 years. He eventually oversaw 600 employees and, as seems to be the refrain throughout his life, fondly remembers the people most of all. His eyes light up almost as much talking about the folks at Scott as they do when he describes a face-off with a big tom.

A couple decades into his career with Scott Paper, Tom began to write. He penned a few pieces for Sports Illustrated, Field & Stream and others before his wife urged him to do more—much more.

“She told me that since I had all these great stories about turkey hunting that I should write them down,” he said. “People would want to read them.”

Tom did just that, and in 1973 The Tenth Legion was born.

“I never thought anybody would read the damn thing,” he said. “There weren’t but 1,500 turkey hunters alive and walking back then, so I figured maybe it would be a good Christmas gift if it didn’t work out.”

In the book, he compared the army of turkey hunters to the Roman Tenth Legion for their “dogged determination, even when facing overwhelming odds.”

He writes with clarity about those legionnaires:

“Many people who hunt turkeys do so with an attention to detail, a regard for strategy, tactics, and operations, and a disregard for personal comfort and convenience that ranks second only to war. As for all cultists, it never occurs to them that they may be anachronisms. Supremely unconscious of the rest of the world, blind and deaf to logic and reason, they walk along their different roads in step to the music of their different drums.”

Tom had 555 copies of the book printed on its first run on what he called “an ego press” and soon began to realize that he had something people wanted to read.

The work that now defines the Colonel is an expression of humanity discovered through the thoughts and motivations of a hunter. Tom set out to tell stories, but his devoted followers believe he achieved much more than that. There is a sense among turkey hunters that this landmark book will remain a translation of their lifestyle for all of time. It’s not only Tom’s legend, but the entire turkey hunting community’s as well.

Likely his most famous quote from The Tenth Legion still rings true today:

“The first turkey that ever came to me on the ground did it a long time ago. I sat there with my hands shaking and my breath short and my heart hammering so hard I could not understand why he could not hear it. The last turkey that came to me last spring had exactly the same effect, and the day that this does not happen to me is the day that I quit.”

And he hasn’t quit just yet. His latest work, Infinite Variety, is inspired by a line in William Shakespeare’s play, “Anthony and Cleopatra:” “Age cannot wither her, nor custom stale her infinite variety.”

It is likely Tom’s last book, and even now, he’s struggling to define the endless challenge presented by the great turkey and its “ability to turn arrogance into hopelessness.” 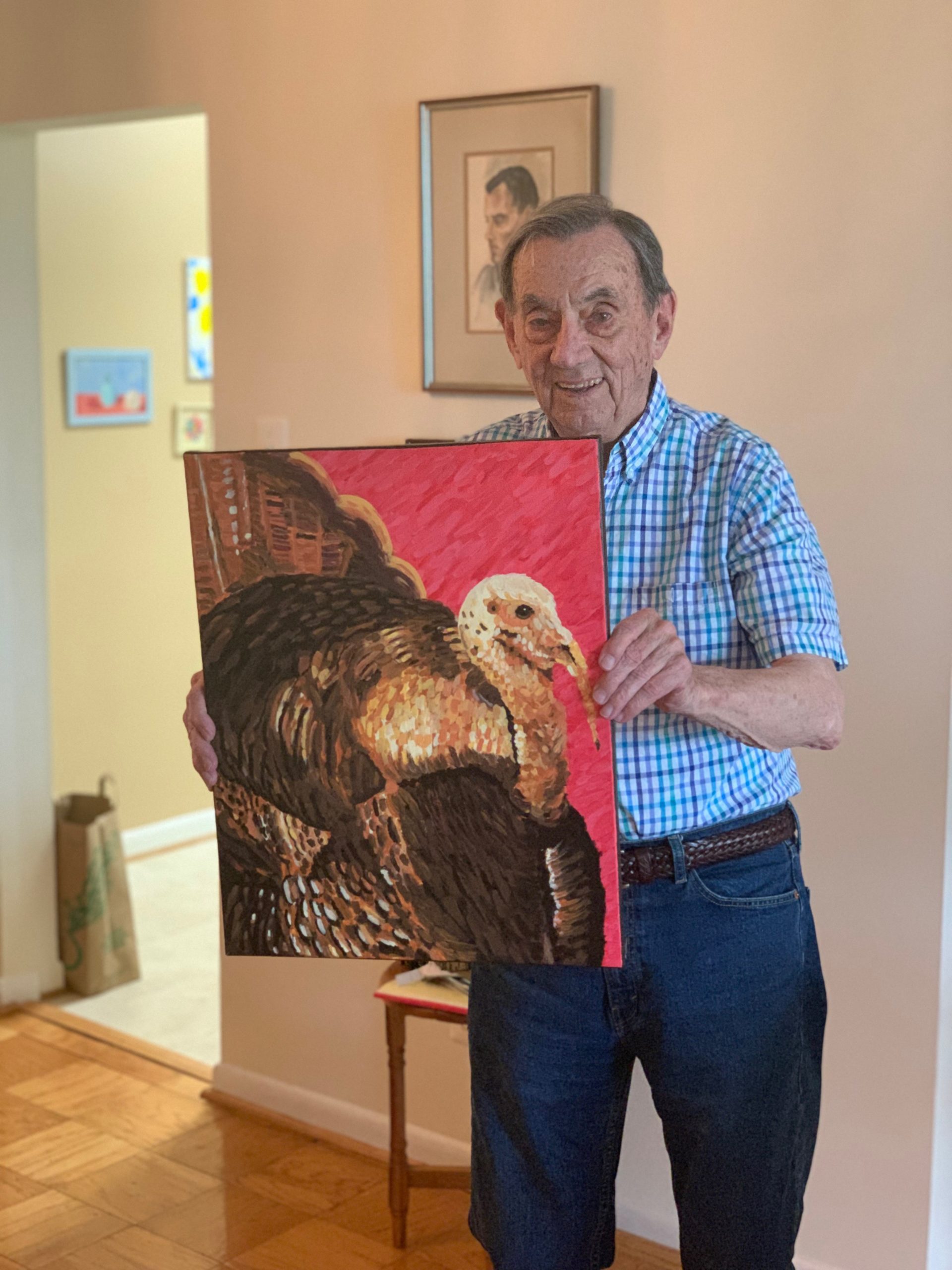 What’s Next?
Age has left Tom’s mind and body shaky, but not too shaky to work a box call or recall that first turkey he killed in 1938 in fine detail.

These days Tom moves like smoke through his apartment, slow and methodical, with the goal of getting to his destination, however long it takes. Much like a turkey hunt, being 93 takes a lot of patience and determination.

“It’s very rare in this day and age that a guy can live this long and make a living doing exactly what pleases him from the beginning to the end,” Tom once said. “And he wasn’t even rich to begin with, so he ain’t got to worry about anybody stealing his money because he didn’t have any and he ain’t gonna die with any.”

Look the Colonel in the eye when he’s telling a turkey hunting story and you’ll find that in these moments of recollection, no matter how brief, he’s more alive than ever.

“You have to pay for every bird you kill,” he wrote in The Tenth Legion. “And the coin you use to pay for them is time.”

For more on Tom Kelly, check out episode 64 of The Hunting Collective where Ben sits down with the famed hunter for an interview.

How to Turkey Hunt in Big Woods

If you take away agriculture from turkey hunting, it starts to feel like chasing whitetails in big...

If you take away agriculture from turkey hunting, it starts to feel like chasing whitetails in big...

The 6 Turkey Vocalizations You Need to Know