Ozone, Carbon, and Cover Scents: Can You Beat a Whitetail’s Nose?

Many hunters doubt they can beat the seemingly invincible noses of deer, elk or other game once the animal gets downwind.

Given what we read about animals olfactory powers, and what we’ve witnessed while hunting, it’s understandable why some hunters think scent-control methods are futile wastes of time and money.

Or, are those just excuses that justify an attitude? Some hunters simply refuse to follow the detailed plans of scent-control regimens. They’re likely impatient, pressed for time, or too cheap to buy all the necessary sprays, scents and scent-masking technologies available.

Despite such challenges, odor control has long ranked high with hunters. In a 1994 survey of Deer & Deer Hunting magazine readers, 75 percent used “scent eliminators” and ranked them well ahead of urine-based scents and cover scents including licorice, vanilla, earth, and “autumn woods.”

Make no mistake: Scent control isn’t quick and convenient, and humans produce and carry countless odors from unlimited sources. For example, we constantly exhale carbon dioxide, a waste gas that includes trashed molecules from our metabolic and digestive systems. We release similar waste molecules from food and drink, including smelly items like garlic, onions, coffee and alcohol. Still, other scents disperse as we shed microscopic skin particles. If that’s not enough, some of our waste products turn rancid while endlessly generating bacteria in caps, boots, clothes, and backpacks.

With all those factors working against us, maybe scent control truly is pointless.

Mark Kenyon, founder of the Wired to Hunt, understands those challenges but strives to minimize them with a “shotgun approach to scent management.”

Kenyon uses an array of products from an industry teeming with scent and scent-control manufacturers. Just consider that at the Archery Trade Association’s annual show, 10 percent of the 600 exhibiting companies are peddling scents, lures and scent-elimination products.

Still, Kenyon is careful not to overstate things.

“I have no illusions about making myself invisible to deer, but I try everything I can to reduce and manage human scent,” he said. “I can’t eliminate every possible scent molecule, and I can’t point my finger at one or two things that work best, because I’m using all of them at the same time. But I try them all in hopes that some percentage of those things combine to reduce my scent. I think I do enough to help a little bit, and every little bit can help me in the woods.”

Kenyon’s scent-control program includes showering with scent-free soap and shampoo, washing his clothes in scent-free detergents, hanging everything outside in fresh air, storing it all in Scent Crusher or Ozonics dry-wash tote bags, never wearing those clothes indoors or in his truck, dressing to hunt outside his truck, dousing himself and gear with scent-killing products, and spraying his boots and pant legs with Nose Jammer before entering the woods. Once he’s in his treestand, Kenyon activates an Ozonics unit, which emits ozone streams that destroy human odors by shattering their molecular scent chains.

“I can’t claim my system is 100 percent effective, but it’s usually worthwhile. I realize wind speeds, air temps and humidity levels factor in, too, but I’ve had it where deer didn’t blow or flee when they got downwind of me. I’ve gotten away with it.” 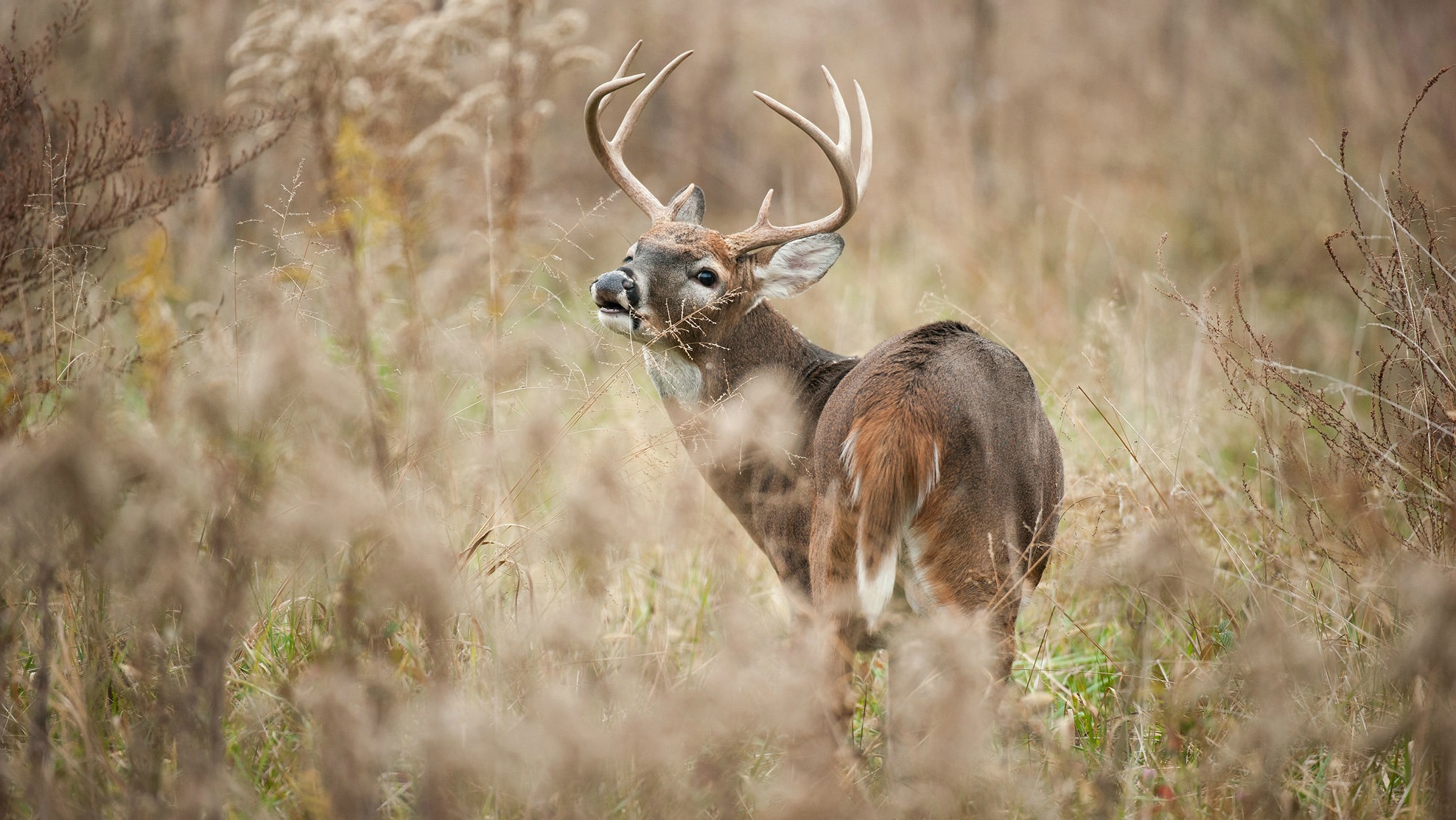 “I don’t try for absolute zero scent because that’s not possible, but I want my odor signature to be like ‘white noise,’ where deer might be aware of it, but they aren’t alarmed,” Andrews said. “They think you’re farther away than you are, or that you were there yesterday and your scent is just lingering. They’re aware of something, but they’re still comfortable. I usually hunt where I’m not the only hunter. My goal is to beat all those hunters who take no precautions.”

Andrews said a deer’s response to faint human odors resembles how hunters react when smelling a skunk when entering the woods.

“If I get a faint whiff, I’ll proceed at my normal speed. If the smell increases, I slow down. If it gets powerful, I stop, reassess and change course. If you control your scent, you can make deer think you’re too far away to be a threat.”

Andrews promotes ScentLok’s seven-step system to slash human odors. The system resembles Kenyon’s, but includes carbon-activated scent-trapping clothes and headcover. Andrews recommends “reactivating” the clothes in a dryer every 40 hours. Some hunters mistakenly believe charcoal-based filters must be super-heated to reactivate. However, dryers get clothes hot enough to release enough odors from carbon filters to make room to adsorb more odors. It’s similar to wringing out wet clothes. You can’t squeeze them bone dry, but you can remove enough water to stop the dripping and then sop up more.

Of course, some hunters dismiss carbon-activated clothes entirely, even though ScentLok successfully defended its technology in federal court with research by Rutgers University. The court ruling stated: “ScentLok carbon-lined clothing blocked or adsorbed 96- to 99-plus percent of odor compounds, and essentially 100 percent of surrogate body-odor compounds.”

Then again, some folks didn’t need a court ruling to be convinced. Countless people have experienced the power of carbon-based filters, which are used in everything from cigarette filters to gasmasks. A standard exercise in Navy boot camp, for example, is to make recruits don a gasmask, herd them into a teargas-filled chamber, close the door, and eventually order them to remove their mask. They must then shout their general orders while choking, crying, coughing and slobbering from the teargas, at which point they’re let out.

Maybe elk, deer and other game feel much the same when human odors jolt them with deathly fear. Based on how rapidly and loudly they sometimes flee our scent, the analogy seems apt.

Ultimately, no matter what hunters say, most dabble with sprays, many try scent-killing ozone technology, and some use clothes, boots and headcovers lined with carbon-based filters. Only one thing seems certain, though. Successful scent-control requires more than dabbling. It demands discipline, commitment and consistency in using odor-suppressing technology. Many hunters just won’t make those commitments.

Yes, staying downwind of game remains the priority, but that’s true with everyone. The difference is that scent-control disciples know the wind will eventually betray them. When it does, they hope their backup system will save them. The more extensive their system, the less they count on luck.

Save this product
First Lite
Sanctuary 2.0 Insulated Jacket
$380.00
Windproof membrane + silent softshell + 37.5 insulation.
Shop Now
Save this product
Phelps
Alpha Pro Grunt Call
$49.99
The Alpha Pro uses components constructed in the good old USA. Again, we go back to a machined acrylic barrel, but this time we use a different type of internal reed system that’s tuned to produce aggressive grunts that will challenge any buck’s dominance. Speaking of the reed, we install a specialized rivet into the reed to create momentum, preventing the reed from locking up from condensation.The custom tube bellows, smooths out the call’s...
Shop Now
Save this product
First Lite
Transfer Pack
$325.00
The Transfer Pack is the Whitetail hunter’s workhorse. Purposefully engineered to efficiently pack and unpack every piece of gear you’ll need in the woods, including a tree stand, climbing sticks, and your bow. The Transfer Pack's versatility is perfect for anyone hunting out of a saddle or a tree stand, as its bucket-style design and multiple hanging configurations allow the hunter complete access to extra stowed gear and accessories throughout...
Shop Now
Save this product
Phelps
DOA Doe Bleat
$39.99
Every savvy whitetail deer hunter packs a doe bleat for when the time is right, so we have to round out our deer call lineup with a bleat that won't disappoint. Countless hours researching doe vocalizations, we hand tune the internal reed assembly that’s housed in an acrylic barrel and injection molded exhaust, to produce bleats that will appeal to any buck that’s on “doe patrol”.
Shop Now
Get the latest in your inbox
Subscribe to our newsletters to receive regular emails with hand-picked content, gear recommendations, and special deals.
Our picks for the week's best content and gear
For the whitetail obsessed, with Mark Kenyon
Redefining our connection to food, with Danielle Prewett
Your one-stop for everything waterfowl, with Sean Weaver
Get out on the water with the MeatEater Fishing crew
Technical hunting apparel
Purpose-built accessories for hunting and fishing
Quality elk, turkey, waterfowl, and deer calls
Privacy Policy

If there’s any one thing that connects the most consistently successful whitetail hunters I know, it’s a strong focus on scent control. A whitetail’s nose is its best defense mechanism. For that reason, the smart hunter will do everything possible to control the scent he brings into the woods. Can you fool a deer’s nose 100% of the time? Absolutely not. But a detail-oriented strategy can help you get away with more than you would otherwise. It...

It had to be a scam. At least that’s what I figured when I first heard about Nose Jammer. I mean seriously, an aerosol can that sprays a substance that would supposedly “jam” up a deer’s nose? Unlikely. It seemed to me that Nose Jammer was just another in a long line of hunting “accessories” that would be a waste of my money. But a friend told me it actually worked. And then a colleague. Half a year later I hear from another hunter, “it actually...

The summer deer chores continue, and in today’s #WiredToHuntWeekly I’m taking you along for a quick project improving cover in one of my tree stand locations. In this short video I explain how I’m improving the available cover at this stand site, and then discuss why it’s important to make small improvements like this when hunting mature bucks. Take a look below, and be sure to subscribe to the Wired To Hunt YouTube channel to catch all of our...