Rabbit hunting is a favorite off-season pursuit for many sportsmen.  Chasing rabbits allows for a hunter to hone their skills while enjoying a day out in the field with good friends.

While you may think rabbit hunting is pretty easy, there is a lot that goes into the act. Rabbits are tough animals to hunt and kill, using the right methods and strategies will help you be successful on your hunt.

Hunting Methods
Rabbit hunting allows you to master the art of the carefully planned drive as well as the ability to connect on moving targets with a shotgun or rifle. Below is an explanation of the deadliest and most versatile rabbit hunting strategy, but first we’ll touch on a couple other methods.

Use Dogs
The first of these is running them with beagles. When pursued by dogs, a rabbit will travel in a looped pattern that eventually brings it back around to the place where it was originally hiding. Once the dogs start to chase a rabbit, the hunter tries to position himself where he has a clear shooting lane in the proximity of where the animal was flushed. He then waits for the rabbit to come back around.

The rabbit usually keeps a strong lead on the dogs, so they aren’t always running at full blast when they pass by. A hunter who is good with a .22 can often connect on these slower moving shots.  However, a shotgun allows you to hit a much higher percentage of the rabbits, especially in thick cover where it’s often necessary to shoot through a veil of brush.

Still-Hunting
Still-hunting is another way to hunt cottontails. This method works extremely well in the arid regions of the west, as the mountain and desert varieties of cottontails do not hide ts well as eastern varieties and they do not flush as readily. On cold and sunny days, they can be found basking on south-facing slopes near outcroppings of rock that give them some overhead protection from avian predators.

They are also fond of abandoned prairie dog and ground squirrel burrows, where they can bask in the sun while being just a split second away from shelter. It’s best to still-hunt rabbits with the aid of binoculars. Use them to study outcrops and other likely basking areas in order to find the rabbits before they’re aware of you. A .22 is a great option when still-hunting cottontails in the West. Shots are often long and the stationary targets allow for head shots, which minimizes meat wastage.

Drive Hunting
For true versatility and reliable action, a cottontail rabbit hunter should learn how to drive rabbits. This method works virtually everywhere that cottontails can be found. All it takes are a few hunters who can work together and follow a plan.

Ideally you’ll have five or six guys, though as few as two or three hunters can have good success in an area with plentiful rabbits. Basically, the method comes down to having pushers flush rabbits in a controlled fashion that more or less forces the animals to pass the locations of carefully positioned standers. The best way to understand this strategy is to study it in a field scenario. The thinking behind this scenario can then be applied to pretty much any cottontail hunting location. 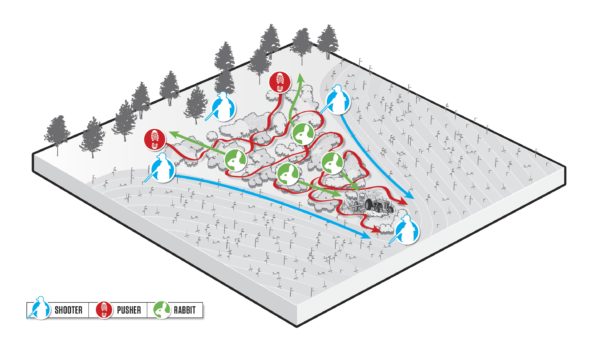 Here’s a situation where a low and marshy area has caused an incongruity in a farmer’s field, forming a sort of brushy peninsula that juts out into his crop of corn. Over the years, the point of the peninsula has turned into a garbage dump of sorts. Rusted fencing materials, a few junked implements, an old wood stove, and dozens of old buckets and drums have joined the briars and high grass. Because the peninsula melds seamlessly into the open woods, it doesn’t seem wise to push the rabbits in that direction. Visibility is just too low in there.

Instead, the two pushers will come in from the north and thoroughly kick out the briar patches as they move south. Stander #1 has positioned himself overlooking the trash heap, knowing that the flushed rabbits will likely be headed in that direction to take shelter amid the impenetrable junk. Due to the strong possibility that the rabbits might double back and head toward the open woods, standers #2 and #3 will parallel the pushers in order to cover the ground both ahead of them and behind them.

By the time that the pushers reach the dump pile, all three standers will be surrounding the pile and ready to cover it as the pushers climb in there to start kicking around. A fourth stander can be placed in the open woods to the north, which is an optional position. He might get a lucky crack at any rabbits that head that way, especially if the pushers shout a “Heads Up!” when they see a rabbit that’s attempting to double back.

A Guide to Hunting Cottontail Rabbits

The beauty of the cottontail rabbit lies in its near ubiquity. The vast majority of hunters in America are within an easy drive of prime cottontail country. Chasing these rabbits allows you to master the art of the carefully planned drive as well as the ability to connect on moving targets with a shotgun or rifle. What’s more, cottontails make for excellent eating. You can braise them, grill them, bake them, really just about anything that can...

Cottontail rabbit hunting is a simple proposition on paper. You either push through the gnarly stuff until bunnies bust out and roll them with a load of 7.5 shot, or slip along a brushy fenceline with a scoped .22 and plink them as they hang tight and try to blend in. Both strategies can work well, but they’re often dependent on weather conditions, habitat, and an understanding of bunny behavior. Factor all of these into your day afield and you...

Fact Checker: Is It Unsafe to Eat Rabbits Before the First Frost?

Myths, lies and old wives’ tales loom large in the outdoor pursuits. Here at MeatEater, we’re dedicated to separating facts from bullsh*t, so we created this series to examine suspect yarns. If there’s a belief, rumor or long-held assumption you’d like us to fact check, drop us a note at factchecker@themeateater.com. Claim It’s unsafe to eat wild rabbits or hares before the first hard frost of the year. If you eat a wild rabbit sooner, the meat...