Mountain goat hunting is arguably the most dangerous form of North American big game hunting. The rugged terrain and the extraordinary climbing abilities of this animal conspire to put you into tough situations where you have to weigh your own safety against your desire to be successful.

You have to climb to them on foot, usually sleeping on the mountain for multiple nights in conditions that can be wet, cold, and sometimes icy. Under these circumstances, hunting can become a torturous exercise in problem solving. So when planning a mountain goat hunt, make sure to allow adequate time. You don’t want to be rushed when you’re hunting such dangerous country. Despite all the hardships, or perhaps thanks to them, there remains an undying interest in mountain goat hunting among seasoned backcountry hunters. It is one of the ultimate hunting challenges.

A.K.A
Mountain goats are not actually goats. They belong to a bovid subfamily called Caprinae, which is populated by many horned mountain dwellers. The mountain goat’s closest living relatives include the serows and goral of Asia, as well as the chamois of Eurasia.

Bar Room Banter
Mountain goats are probably the least understood of all North American big game. For a long time, it was assumed by biologists that mountain goats could withstand harvest rates similar to species such as deer and elk, sometimes as high as 20% to 30%. In reality, though, mountain goats have very low reproductive rates as well as significant mortality rates from predation, starvation, and accidental death from avalanches and rock slides.

“Typical” big game harvest rates can lead to declining populations and even localized extinctions. Thankfully, state game agencies now set their mountain goat harvest goals as low as 3% or 4%. This helps ensure a viable resource of mountain goats that will benefit future generations of hunters.

Physical Characteristics
Stocky and heavily shouldered, with stout, muscular legs. Whitish fur, often stained a dirty yellow; it is short in summer and long in winter. Both males and females are armed with small, stiletto-like horns. Males can weigh close to 200 pounds, females, up to around 160.

Diet
A wide variety of alpine plants, including grasses, sedges, forbes, lichens, and moss. Also limbs and leaves from low-growing shrubs and conifers at or near timberline.

Life and Death
Mountain goat predators include wolves, wolverines, and golden eagles, though avalanches and rockslides probably kill more mountain goats than all natural predators combined. Mountain goats can live into their teens. Habitat disturbance is the greatest long-term this shy species.

Breeding and Reproduction
Mountain goats rut in November and December. Females drop one or two kids, though sometimes three, between mid-May and mid-June.

Habitat
Precipitous and rocky country at or above timberline.

Telltale Sign
Besides tracks and scat, look for shed wool collected on shrubs near trails and bedding areas. Bedding areas are often marked by shallow depressions excavated into soft ground on ledges and near the bases of cliffs.  These depressions are usually bordered by an abundance of droppings.

Edibility
Excellent tasting, though older animals can be almost unchewably tough. When dealing with a tough mountain goat, use slow-cook methods such as braising. Goat meat is also well-suited for corning, grinding, and sausage making.

Hunting Opportunities
Unless you’re a resident of Alaska, British Columbia, the Yukon, or the Northwest Territories , or have an immediate family member in one of those places , you’ll have to hire a guide if you want to hunt mountain goats on a regular basis.

Most western states do offer mountain goat tags through permit lotteries, but the odds of drawing are slim. It’s best to team up with a bunch of friends and make a deal: if one of you draws a mountain goat tag, you all go along and share the experience, costs, and meat.

Hunting Methods
Like most alpine hunting, mountain goat hunting is a spot-and-stalk venture. The goat’s habit of hanging around steep cliff faces and along knife-edge ridgelines makes it a fairly easy animal to find once you get into the appropriate terrain. Because of the extreme steepness of goat country, the animals are often glassed from below. Getting up to the highest point of land requires too much effort and entails too many risks.

Thanks to their coloration and the openness of high mountain country, it’s possible to spot mountain goats at greater distances than probably any other big game animal. An exception is when mountain goats are at lower elevations at or near timberline. This is especially common in coastal British Columbia and Southeast Alaska, where goats inhabit lower elevations than they do on inland mountain ranges, and also during late season hunts elsewhere, as winter-like conditions in the high country push goats downward toward shelter and less snow.

But even goats that are bedding in timber will still keep steep cliffs to their back as escape cover. During morning and evening hours, they will move up to the cliff faces, or out to open bowls, basins, and timber-free ledges where they can find their preferred foods. If you’re hunting goats in such a situation, make sure that you’re glassing during the early and late hours of the day while otherwise hidden goats are visible.

Of course, not all mountain goats are in such difficult places to reach. Often a mountain goat can be stalked in a fairly straightforward manner. If you’re a competent marksman who can handle shots of around 300 yards, goats can be approached from directly below if there’s adequate cover to conceal your movements. But since the animals are sensitive to threats coming from below, there’s a good chance that they’ll spot you before too long.

When they do, they’ll head for the cliffs if they’ve been experiencing any hunting pressure. A better bet is to use a gulley that lies off to one side or another of the goat you’re after. You can scramble up the bottom of the gulley until you’re even with the goat and then move laterally to a point where you can make your shot.

A mountain goat hunter should bring along whatever climbing equipment he or she is comfortable using. A rope and carabiners can come in handy for retrieving a downed animal in a difficult spot, or for securing an animal that might go over an edge during the butchering process. During late-season hunts, when conditions get icy, crampons and ice axes can make mountain travel much easier.

If you get into a situation where you can approach from above, the goats might not even think to look up. But if they see you above them, they’ll likely panic. They are very shy about threats from above and will probably make a hasty retreat by moving along the face below you to a safe position. No matter the direction of your approach, uphill, side-hill, from above, keep this in mind, if a mountain goat sees you, he isn’t going to forget about you just because you duck behind some boulders. When you vanish from sight, he’s going to get nervous about where you went and will probably leave much more quickly than if you stayed out in the open and attempted a slow, direct approach.

Retrieving a Mountain Goat
Retrieval of the animal is perhaps the number one thing that should be on a mountain goat hunter’s mind. You should NEVER shoot at a mountain goat unless you are sure that you’re going to be able to reach the animal’s carcass. It isn’t enough to plan on the animal dropping right in its tracks, either.  Mountain goats can take a hit quite well and will often travel a few steps before tipping over from even a well-placed shot.

Those few steps are all that it takes for a goat to reach a precipice and plummet into oblivion. And if a mountain goat does keep its feet after the initial shot, fire another round immediately. You want to anchor the animal as quickly as possible.

Even downed goats are capable of traveling tremendous distances, as their barrel-shaped bodies and short legs seem custom designed for rolling down hills. So you need to account for plenty of after-shot movement, both walking and rolling, when assessing whether a goat is in an appropriate location to shoot.

Know the Differences Between Billies ad Nannies
Finally, goat hunters have an obligation to the species to learn the difference between billies and nannies. Because it’s so hard for inexperienced hunters to distinguish between sexes, game managers aren’t able to mandate male-only harvests with mountain goats. But if hunters did a better job and limited their harvest to billies, it’s fair to say that we would see increases in the number of mountain goat tags available to hunters throughout the range of the species. 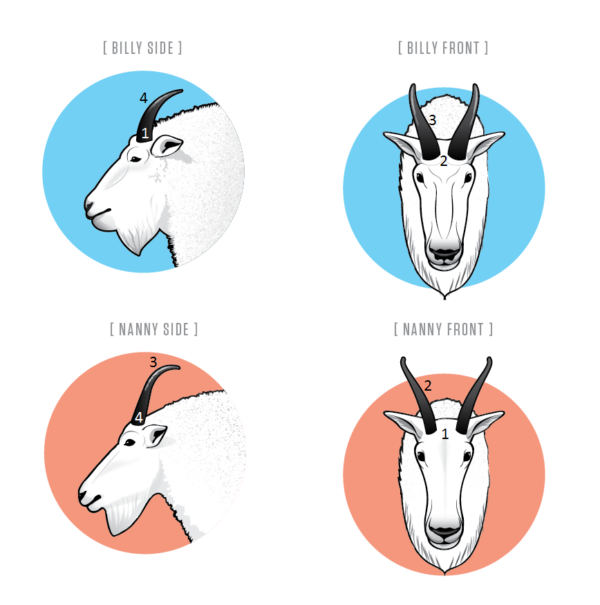 Horn size and configuration can be used to determine the sex of mature mountain goats, but it is often difficult for novice goat hunters to make the call without having extra information.

The animal’s urination posture and visible genitalia can also be used to distinguish between billies and nannies. During urination, billies stand up with their hind legs stretched backwards and splayed to the side, while nannies squat with their rump close to the ground.  The scrotum can be clearly visible on a billy in a short summer coat, and the dark patch of the vulva can be visible on a nanny when her tail is raised.

This isn’t to say that there’s anything wrong with harvesting female specimens of big game in general, in fact, doing so is often necessary for sound management. Instead, this is something that is specific to mountain goats, which have fairly low fecundity and relatively small population sizes. By killing a billy, you remove just one animal. By killing a nanny, you’re removing three or four. If possible, shoot a billy. If it’s not possible, you can always apply for another tag in the future.

Mountain Goat
Get the latest in your inbox
Subscribe to our newsletters to receive regular emails with hand-picked content, gear recommendations, and special deals.
Our picks for the week's best content
For the whitetail obsessed, with Mark Kenyon
Redefining our connection to food, with Danielle Prewett
With Joe Cermele and Crew
Technical apparel for the avid hunter
Purpose-built accessories for hunting and fishing
Quality elk, turkey, waterfowl, and deer calls
Privacy Policy

One of the things I like most about mountain goats is their ability to eat and sleep on cliff faces that would be nearly impossible for a human to climb without technical equipment and expertise. The challenge in hunting them isn’t finding them; instead, the challenge lies in trying to get up to them, and then finessing yourself into a situation where you can take a shot without the animal getting destroyed by falling a few hundred feet into some...

Colorado has experienced an unfortunate series of mountain lion attacks, three this year alone. The victims all survived and were treated for their injuries. Colorado Parks and Wildlife found and killed each of the lions. “Since 1990, there have been 22 mountain lion attacks on humans in Colorado with three of those resulting in a fatality (1991, 1997 and 1999),” according to a press release from Colorado Parks and Wildlife. “There have been...