My first buck was a “half-rack” Pennsylvania whitetail with three small points on its single antler. By today’s standards, that buck wouldn’t have raised any eyebrows, but I was damn proud of that deer, and myself. I killed it just before dark during a blizzard on an after-school solo hunt. In the failing light and falling snow, I put the scope on the deer several times before I realized it was a buck. Dragging that deer across a dark, snowy, cut cornfield to my house is one of my finest hunting memories.

More recently, I’ve tagged a few mature “trophy class” mule deer in Colorado and a Pennsylvania whitetail buck that would have been considered a true giant when I was a kid. Over the years, I’ve also killed a handful of forky muleys and small, basket-rack whitetails.

I don’t have any regrets about shooting those young bucks, but on multiple occasions I’ve been asked why I’d bother wasting a tag on something so small. It’s a troubling trend in the hunting community that was mostly absent a generation ago.

Many MeatEater fans have shared stories with us about being ridiculed for killing spikes, forkies and basket racks. They all ask us the same question: What’s wrong with shooting young bucks? I wish I didn’t have to bother answering, but first, it’s important to address how we’ve gotten to the point where it’s even necessary for some hunters to ask.

The practice of voluntarily passing up young bucks is a relatively new phenomenon in big game hunting. When I began hunting, any buck was a good one. Of course, this was when whitetail deer herds in many states were way over population objectives, but the vast majority of bucks harvested were only a year-and-a-half old. At the time, buck-to-doe ratios were extremely skewed, as low as only one buck per 10 does. Despite this, some hunters who remembered the days when deer were scarce still believed it was wrong to shoot does.

Due to changes in deer management and hunter practices, there are certainly more big bucks being killed throughout the country. In turn, opinions and attitudes have changed about the type of bucks hunters should or should not be killing.

You could blame it on the constant barrage of “Booner’ whitetails being killed on TV and magazine articles about how to kill the biggest buck of your life, or even social media’s powerful influence. Or, maybe it celebrates the successes of more enlightened herd management and hunting practices. Either way, many of today’s hunters are obsessed with killing big, giant bucks. Notching a tag on anything less is pretty much discouraged, and not often talked about.

You’ll also hear some hunters say mature bucks offer more of a challenge, which is undoubtedly true. There’s simply a lot less of them around and bucks who have survived a few hunting seasons are much harder to kill. Young, inexperienced bucks don’t provide the challenge these hunters are looking for. Huge antlers aren’t necessarily important; winning a battle of wits against the oldest, smartest, wariest deer in the woods is the ultimate goal.

Finally, you’ve got the hunter who, come hell or high water, would rather eat a tag than kill a small buck. These hunters might find it acceptable for a kid or beginner hunter to kill a buck with small antlers, but for them, collecting a trophy head that makes the book is the pinnacle of hunting achievements. 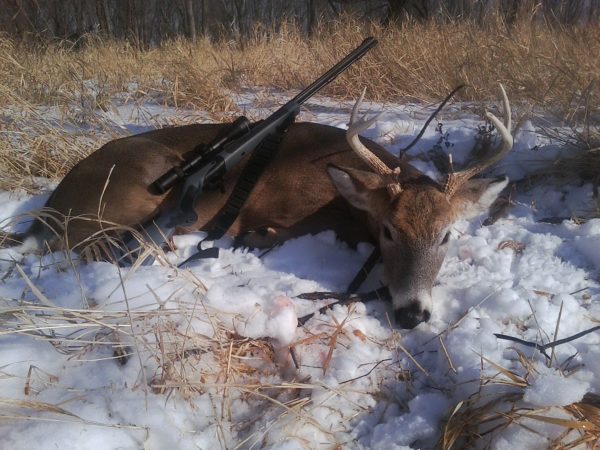 So, is there actually anything wrong with killing a spike or forky buck?

Depending on where you’re hunting, there might be. Some state wildlife agencies manage deer herds for higher numbers of older age class bucks through minimum antler point restrictions. If, for instance, regulations mandate a three-point-minimum restriction, shooting a spike or forky buck would be illegal.

However, many states without antler point restrictions, including my home state of Colorado, are known for consistently producing mature, big-antlered bucks while still allowing hunters to shoot young “meat bucks.” There’s plenty of evidence supporting this management practice, too.

“Nine of the top 10 states in terms of Boone and Crockett whitetail entries since 2010 have either no mandatory antler point restrictions or limited antler restrictions,” Richard Smith wrote in an article for Deer and Deer Hunting. “Those states are Wisconsin, Kentucky, Ohio, Iowa, Illinois, Kansas, Indiana, Minnesota and Texas. In each of those states, legal bucks are either those with any visible antler or antlers that are at least 3 inches long, such as Wisconsin.”

More importantly, preventing the harvest of young bucks is linked to the declining number of hunters. The Western Association of Fish and Wildlife Agencies found that antler point restrictions “dramatically reduce hunter participation” and “discourage hunters by increasing the difficulty of locating and identifying legal deer.”

What about passing up young bucks in order to produce a healthy, balanced deer herd? From a management perspective, hunters do play an active role in controlling buck-to-doe ratios, but that’s based more on the number of does versus bucks being harvested than the age class of the bucks hunters choose to kill.

Sure, if a young buck who has potential gets a pass this year, he’s a got a better chance of becoming a “shooter buck” next year. But many hunters are motivated by more than just antler size or age. Hunters who argue that only mature bucks present a worthwhile challenge are missing the point that for some, killing any buck, or even a doe for that matter, is a huge accomplishment. That sentiment shouldn’t just apply to kids or beginners, either, even though it is oft-stated concession made by many hunters who routinely advocate targeting only mature, trophy bucks.

“It’s best not to force other hunters to jump to advanced levels of buck management if they’re not ready,” The Quality Deer Management Association states. “They should also be afforded the opportunity to start with younger bucks and work their way up. QDMA even suggests that young or new hunters be allowed to take any buck, even a yearling if that’s their desire.”

On the one hand, that’s a laudable point. Not all hunters should be forced to adapt to the standards of others. On the other hand, why should only kids or new hunters be allowed to take young bucks? And why should any hunter feel obliged to aspire to “advanced levels of buck management” regardless of past experience? Whether a hunter has spent decades or just a few days hunting deer, their age or skill should not be the determining factor for what type of buck is acceptable.

This isn’t an attitude that’s limited to whitetail deer, either. Mule deer and elk hunters are just as prone to this line of thinking. A few years back, while lamenting the stack of raghorn four and five-point elk antlers sitting in a corner of my garage, I caught the trophy bug.

I got it in my head that I wouldn’t pull the trigger on anything less than a mature six-point bull. I’ve killed a pile of elk and never passed on a legal bull. I’ve also never killed a big six-pointer, which seemed more important than filling the freezer at the time. On opening morning, I passed up an easy shot on a young raghorn bull. That season, I didn’t fill my bull tag. I was forced to take a last minute trip to Nebraska where I killed a spike whitetail buck in order to avert a meat crisis.

On another occasion, I hunted a unit with extremely low mule deer densities for an exceptional buck I’d seen before opening day. On the last day of the season, I followed his tracks through the snow a few hundred yards from a freshly thrashed juniper to his bed, where I spooked him without ever seeing him. In fact, I’d only seen a few does and no bucks during the entire hunt.

With only a couple hours left in the season, I cut the tracks of a small group of deer. Minutes later, I shot a forky buck without any hesitation or guilt. Killing the big buck was my goal, but in the end, I was happy with how things worked out in an area where deer were few and far between. Meat in the freezer is better than tag soup.

Simply put, if regulations don’t include minimum point restrictions, then there is absolutely nothing unsporting or ethically wrong with shooting young bucks, no matter what any hunter tells another.

“Take a moment to remember why we hunt,” Kip Adams from the QDMA writes. “Your reason may differ from your neighbor’s, so don’t be critical of what he or she shoots legally or chooses to pass, and never apologize for what you shoot.”

There’s nothing wrong with wanting to kill big bucks or wanting more of them around for future hunting seasons. However, if we’re all being honest, using these arguments to make a case against anyone who is happy with a young buck is based primarily on selfish motivations that should not apply to all hunters.

Ask MeatEater: Do It Yourself or Guided? Part One

At MeatEater, we’re fortunate enough to be able to go on out-of-state hunts every year. On many of those hunts, we’re traveling to places we’ve never been, and in most cases, we’re hunting without a guide. We prefer the challenge and satisfaction that comes with being in a new place and figuring out the animals that live there. Of course, there are times when even experienced hunters are better off hiring a knowledgeable, experienced guide, and...

Ask MeatEater: What’s In Your First Aid and Survival Kits?

First aid and survival kits are the most important items in your hunting pack. All hunters and anglers need to be prepared to ride out unplanned nights in the woods and to treat injuries to themselves or their partners. As the saying goes, “Hope for the best and prepare for the worst.” The contents of your first aid and survival kits may change depending on the location of the hunt, weather and other factors. A quick jaunt to the neighbor’s back...