When I was growing up, we always thought of hunting and fishing as slightly different versions of the same thing. When someone asked what you liked to do, you said huntin’n’fishin’ as though it was one word.

Of course, there are some major and obvious differences, especially when it comes to catch-and-release fishing. But if there’s one practice that seamlessly combines the two disciplines, it’s bowfishing. In most states, bowfishing opportunities are limited to a class of fish commonly known as “rough fish,” or “non-game species.”

Best Bowhunting Species
These include carp, gar, suckers, various species of shad, and sometimes bullhead and catfish. Other states have added some surprising additions to this list: northern pike in Alaska, tilapia in Texas, rays, flounder, and shark in the coastal states of the Southeast, the list goes on.

Granted, many of these fishes are not as universally tasty as members of the salmon and perch family, but a competent chef can turn each into worthy table fare.

Most bowfishing is done in clear water ranging in depth from around 2-4 feet, usually along the edges of deeper water or near escape cover provided by aquatic vegetation or overhanging trees and shoreline vegetation. The water needs to be clear enough for you to see the fish and shallow enough that your arrow can penetrate the fish. Water is much denser than air, and slows the arrow dramatically; you could literally catch an arrow once its traveled through about eight feet of water.

Stealth = Success
Silence is important, as the sound of feet scuffling on a boat will spook fish and send them fleeing for cover or deep water. Excessive waves and loud talking can make things tough as well. A quick mind and body are also important, as often there’s just a couple seconds’ worth of a shot opportunity between the moment when you see the fish and the moment it disappears.  The ability to make snap decisions translates to an ability to get fish.

Account for Refraction
By far, though, the most difficult aspect of bowfishing is dealing with refraction. As light passes from one medium to another—air to water, in this case—it bends or refracts. Just think of how a fishing rod appears to bend abruptly at the water line when you stick the end into the water.

This means that submerged fish aren’t where they seem to be from the bowfisher’s perspective as he looks into the water. I’d say that about 98% of all bowfishing misses are fired over the fish’s back. You have to aim low to hit them, but determining just how low can be tricky. 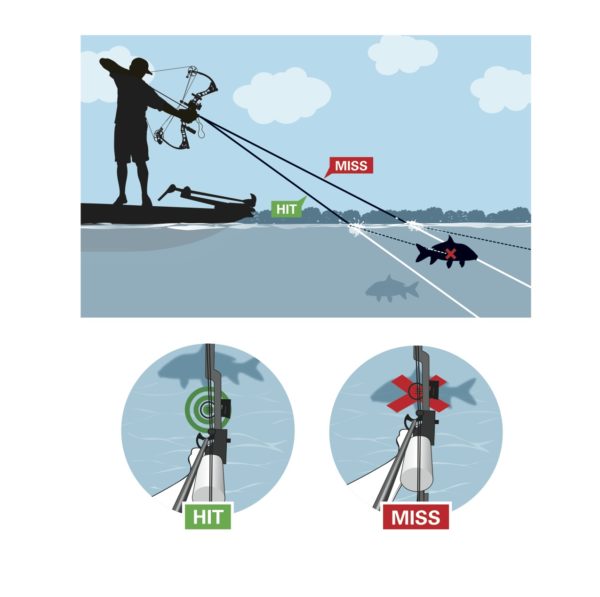 Understanding the Aiming Process
One rule of thumb is that you should aim about ten inches lower than where you want to hit the fish. The best shot placement is in the front half of the fish, along the midline; ideally, you’d punch all your fish through the gill plate.

This is a decent piece of advice, as that would correct a significant portion of the misses that occur. But to really start hitting fish, it’s best to keep in mind a rule sometimes described as  10-4.

Anadromous \ə-ˈna-drə-məs \ and Catadromous \kə-ˈta-drə-məs  \ adj The terms anadromous and catadromous refer to birthplace and spawning migration patterns of species. Rinella: “The classic anadromous fish is a salmon.” For the full collection of the MeatEater Glossary, where you’ll learn everything from the technical to the arcane, go to the Glossary Page.

To say fatherhood is sacrifice would be a lie. We receive so much from our children and the experiences they provide, namely a sense of purpose, deep satisfaction, wonder, crippling anxiety, and existential crises. But, as many men my age are probably beginning to realize, fatherhood does involve sacrifice (if you’d like to stay in good faith with your co-parent), and one of the common victims tends to be our time outdoors. These little people...

The beauty of fishing is that you can make it whatever you want it to be. It’s called style. Do you want to be a largemouth aficionado or someone who only throws bait into the surf? Or, are you casting ultralight rods for wild, 6-inch brook trout in alpine creeks or tossing 9-inch swimbaits for muskies? It’s all fishing, but there are wildly different applications depending on your style, target, and goals. A huge part of mastering any type of...