American fly fishing pioneer Lee Wulff famously stated that “A gamefish is too valuable to only be caught once.” Wulff was an early advocate of catch-and-release fishing regulations that eventually became a widely used management tool in the United States. As a fly fishing trout guide, catch and release is at the core of my job description. I’m sometimes forced to tell my clients I’d be shooting myself in the foot if I allowed them to keep a limit of trout. On the other hand, I also enjoy stacking up fish fillets in my freezer. As a result, I’ve developed a healthy mistrust of people who toss every fish they catch back in the water without ever eating one. This brings to mind another Lee Wulff quote: “There will be no end to angling controversies for there is no one best way for everyone to fish.”

There’s no doubt that catch-and-release fishing can be a valuable and necessary management tool for certain fish species that might otherwise be jeopardized by overharvest. It’s hard to argue against letting a rare game fish go so it can live to reproduce. In the United States, there’s a long list of game fish species that have suffered at the hands of recreational anglers, commercial harvest, and loss of habitat. Striped bass numbers have dropped significantly in Chesapeake bay while further south redfish have managed a comeback after years of overharvest. Sea-run atlantic salmon have all but disappeared from their native habitat in the northeastern part of the country. A small bull trout population in the northern Rockies is forced to compete with non-native brown and rainbow trout. In the Northwest, some native Pacific salmon and steelhead populations persist only through state and federal stocking programs. The truly wild strains of some of these salmonid populations are disappearing at alarming rates.

Fortunately, mandatory catch-and-release fishing regulations have helped to save some game fish that were once in serious trouble. For instance, Florida’s goliath grouper populations have rebounded substantially since it became illegal for anglers to retain them. Other forms of catch-and-release regulations don’t completely limit anglers from keeping some fish for the table. Sensitive sturgeon populations in the Columbia River drainage are generally managed on a strict catch-and-release basis. However, there are time periods when a small number of fish may be harvested through a quota system that puts a limit on the total catch. Slot limits, another type of catch-and-release regulation, are also used to control harvest by limiting the minimum and maximum sizes of fish that can be retained. Slot limits are used on a number of popular species such as walleye, redfish, striped bass, and ling cod in order to preserve numbers of small, young fish and older, breeding-sized fish.

To complicate matters, anglers are sometimes legally required to keep certain species of fish as a way of protecting other species. In Yellowstone National Park for instance, all lake trout caught Yellowstone Lake must be kept and killed in order to protect native cutthroat trout that are devoured by these illegally introduced predators. Nearby, on the South Fork of the Snake River in Idaho, anglers are encouraged to keep rainbow trout to prevent hybridization and competition with cutthroats but the practice is rare, despite the benefits of doing so. In others cases, it is actually illegal to release certain game fish in order to prevent the unnecessary and wasteful mortality that can happen while releasing some species. In Southeast Alaska, anglers who are targeting rockfish must stop fishing once a daily limit is reached. This is because many rockfish species, particularly yelloweye rockfish, often die from pressure changes when they’re reeled up through a couple hundred feet of water. There are strategies for releasing rockfish with deep-water release devices that quickly put the fish back down to high-pressure depths but anglers are still forbidden from targeting rockfish with the intent of releasing them. 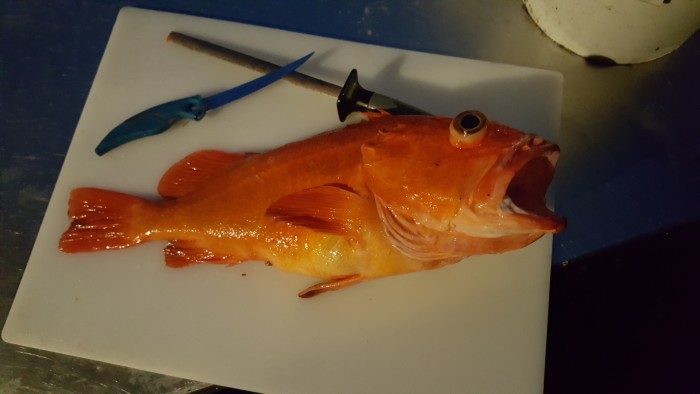 So, all the various forms of catch-and-release fishing regulations do play a vital role in sustaining many fisheries. But, then there are all those fish with very abundant populations that can support widespread harvest. There are dozens of gamefish fish species that fall into this category, from bluegills and blue catfish to mahi and mangrove snappers.

There also many non-native, invasive species that are harmful to native fish in certain waterways where they were illegally or unintentionally released. In these cases, fisheries managers encourage anglers to keep foreign species like snakeheads, Asian carp, and lionfish. There’s also plenty of examples where fisheries managers consider game fish species like smallmouth bass, northern pike and brook trout as non-native, harmful invaders that anglers should, and in some cases, must, harvest. For anglers who enjoy eating fish, the opportunities to fill the freezer are endless. 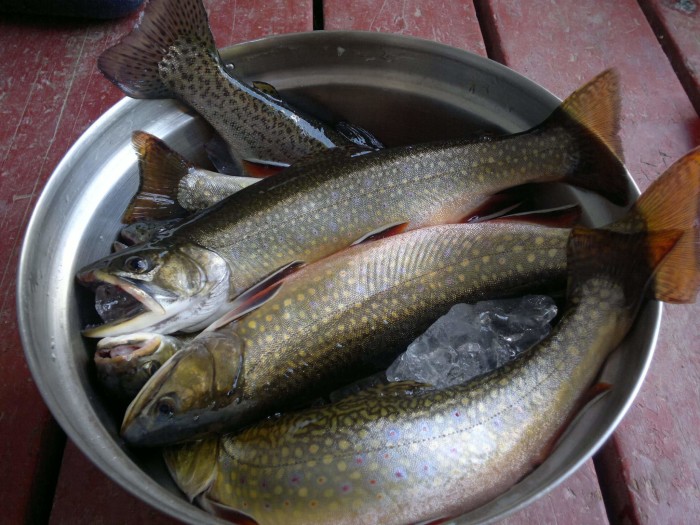 But, some anglers blindly practice catch-and-release fishing regardless of the regulations or management goals. In the last few decades, a culture of catch-and-release has become the norm in sport fishing. Certain species, namely bass and trout, have become the poster children for catch-and-release fishing. There are destination fisheries in this country where a fisherman would be crucified if they were seen keeping a fish by another angler, even when it’s legal to do so. Big money bass fishing tournaments have certainly helped to spread this ideology. It’s also driven by the guided fly fishing industry, where I’ve worked for almost twenty years. My intimate familiarity with catch-and-release has forced me to question whether some forms of the practice are impacting the resource in ways that are more harmful than some of us are willing to admit. Perhaps, in some cases, even more harmful than keeping a legal limit of fish.

This is because a certain degree of catch-and-release related mortality is unavoidable. Some fish, such as catfish, are pretty damn hardy and catch-and-release mortality rates are fairly low. But others, such as trout, are wimps. They are very susceptible injury, exhaustion, or oxygen deprivation from being “played” by an angler. Every summer, on the rivers where I guide, dead trout begin showing up on the stream bottom with increasing frequency as the season progresses. As water temperatures increase and oxygen levels decrease, more and more released trout, especially the big ones, don’t survive being caught. Some poorly handled fish may die shortly after being caught once, but others may take hours or days to die after being caught multiple times. Sure, rubber nets, barbless hooks, careful handling, and keeping fish submerged before release diminishes injury and oxygen deprivation. But imagine twenty boats, each with a couple anglers, floating the same five miles of river, every day, all summer long.

With each boat catching and releasing a couple dozen trout each day, ask yourself who’s doing the most damage to the resource over time. Is it the uppity catch-and-release angler who sneers at the kid with a trout on a stringer but has multiple 20-fish days in a single week?  Or is it the bait fisherman who hits the water for an hour or two after work once a week for a two-fish limit? It’s something I think about a lot considering the thousands of trout my clients have caught and I’ve released over the years.

There’s plenty of mortality studies that illustrate the impacts of catch-and-release fishing. The results of these studies vary widely. Important factors include the fish species, the type of hook used (barbed, barbless, single, treble, circle, etc.), the types of bait used (live or artificial), handling practices, water temperature, and water oxygen levels. But all of these studies agree that catch-and-release practices are far from harmless. For example, a 1996 study in Colorado estimated mortality rates on trout caught a single time by fly fishermen using barbless hooks to average around 4%. Trout caught on lures died at a rate of 21% while 32% of trout caught on bait died after release. Another more recent study of striped bass spawning in the Roanoke River in North Carolina showed catch-and-release mortality is significant. On average, 6.4% of caught striped bass died after release. Bass caught on live bait exhibited much higher mortality percentages than those caught on artificial lures. Across the board in these studies,no species is immune to catch-and-release mortality and mortality rates increased in warmer water. And remember, these are fish that were only caught a single time. Mortality percentages increase if fish are caught more than once. Finally, even if only a small fraction of fish die after being released, they still can’t be utilized as a wild food resource.

The gathering of food resources through fishing and hunting is sometimes referred to as “bloodsport”. I believe some people enjoy catch-and-release fishing because it allows them to partially engage in a bloodsport without actually getting any blood on their hands. It’s hard to find fault in that. All humans have an ancient hunter-gatherer lurking below the surface. And I feel catch-and-release fishing satisfies those latent hunter-gatherer urges, even for people who have no desire to kill their own food.

But it is impossible to escape the questionable merit of forcibly piercing a perfectly edible fish’s mouth, forcing it to struggle to the point of exhaustion, only to let it go after you’ve had your fun. It’s a moral dilemma we can justify, in part, because we tend to view fish much differently than animals like deer. Anyone who was caught snaring a deer, watching it struggle for a while, wrestling it to the ground, and then turning it loose just for the fun of it would be treated much differently than someone who catches and releases fish.

Certainly many of those same healthy fish populations that can sustain limited harvest can also sustain catch-and-release. And there’s no denying that the act of catching fish is fun. It’s a joy, pure and simple. But whether the motivation is personal enjoyment, earning a paycheck, social media clicks, or winning a tournament, we should be questioning the potential results of catch and release fishing. And in some cases, the results of catch-and -release aren’t pretty. No matter how carefully an angler handles a fish, it is impossible to prevent some level of post-release mortality. All anglers have a responsibility to consider this reality.

Times are tough right now for a lot of folks, but that doesn’t mean you can go out and start stacking up meat with no regard for the law. Lately there’s been a lot of misinformation on social media regarding the temporary suspension of fish and game laws surrounding season dates and bag limits. Simply put, none of it is true, though a few select states have suspended fishing license requirements for the time being. Bag limit and season dates...

The Dogs That Track Trout for Conservation

If you’re like me, you’ve been awed time and again by the nose of a good dog. Flushing pheasants out of cattails. Trailing lions in the snow. And now, identifying the species of fish in a trout stream. That last one is science, not science fiction. To help conserve native trout, the scientists at Working Dogs for Conservation have proven that dogs can differentiate species of fish, by scent, while the fish are swimming in their habitat. Executive...