I was in a bind. I keep my fishing spots, even the ones in city parks, secret. But my kids were making a commotion about catching another one, and people had started to notice. In all fairness, it’s hard not to notice two children giggling and catching 20-inch fish. I saw a couple approaching and I tensed, sensing the inevitable question, “What are you catching?”

They say honesty is the best policy, and sometimes it’s the best way to protect your fishing spots, too. “Redhorse,” I said dryly. When they repeated, “redhorse?” I knew our spot was safe for another day. Whew.

But why is that? Why does a stream teaming with 20-inch redhorse repel anglers, but another stream full of 20-inch walleye pack them in cheek to jowl? You might be surprised to know that the flesh quality is comparable.

Public Relations
If “any publicity is good publicity” then redhorse have a serious PR problem—they don’t get any publicity. Based on my personal experience, most people have never heard of redhorse. Those who have usually lump them all together as “red tails” or “redhorse suckers.”

Redhorse belong to the genus Moxostomoa, which includes at least 21 different species. With 21 choices you’d think one of them could at least get some bad publicity. There was a 22nd species, the harelip sucker (Moxostoma lacerum), but it was last documented in 1893—carrying the dubious honor of being the first fish to go extinct in the United States.

It’s pretty easy to narrow down the angling possibilities. Take out the six species of jumprocks for being too small to interest most anglers. The copper redhorse (M. hubbsi) and robust redhorse (M. robustum) are endangered and very rare. Another seven species have very limited ranges. That leaves us with only six species to fish for: shorthead (M. macrolepidotum), golden (M. erythrurum), silver (M. anisurum), river (M. carinatum), greater (M. valencienesi), and black redhorse (M. duquesnei). These species are found throughout the Eastern U.S. and Canada from the Rocky Mountains down to Florida and up into Quebec. A few types regularly grow to 10 pounds and larger.

I think the redhorse suckers' PR problem stems from the fact that they are suckers, and suckers have lips. Sub-terminal lips. There is just something about dour, downturned sucker lips that people can’t handle. But it doesn’t seem fair to discriminate against a fish for having full lips. When people have full lips, they get to be in movies. 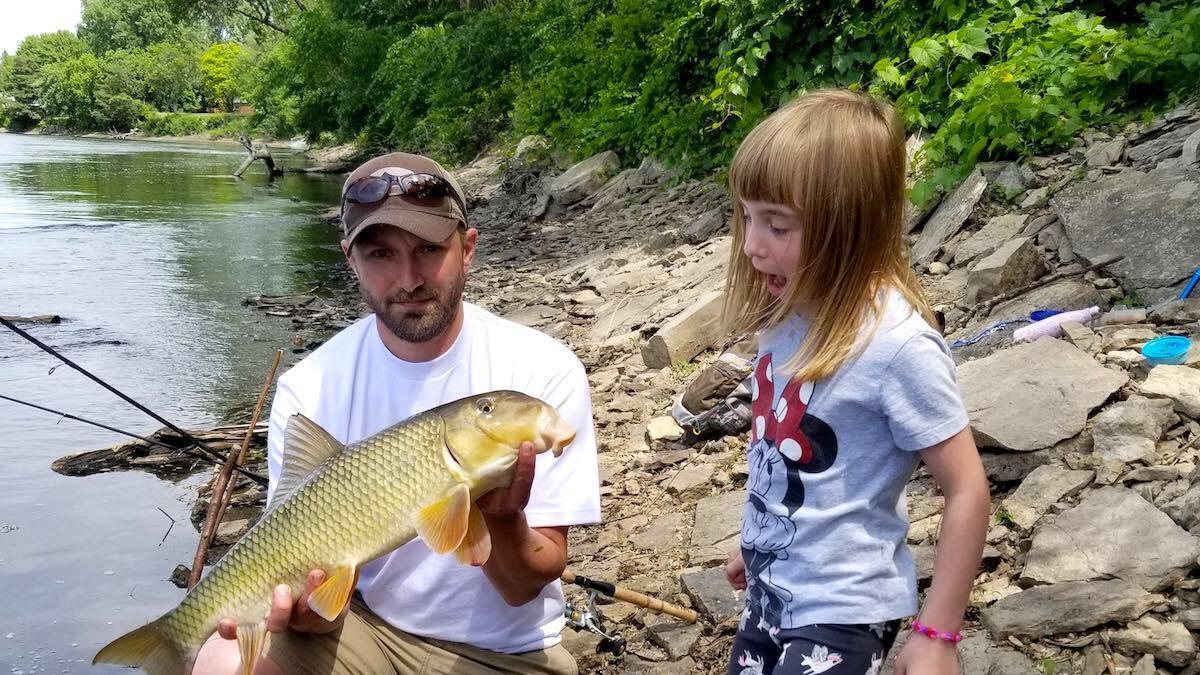 Bottom Feeder
Redhorse are often accused of being “bottom feeders.” Bass eat crayfish but aren’t considered bottom feeders. Lake trout and pike eat dead bait, and no one calls them bottom feeders. Matter of fact, you won’t catch redhorse on dead bait. If your worm dies, you will catch catfish, but not redhorse. Redhorse feed on insects and invertebrates just like trout. The difference is that trout wait for invertebrates to drift by and redhorse don’t. They root them out of the rocks and substrate, often helping other fish as they go.

I want to be absolutely clear on this point: redhorse taste good. Like walleye, they have firm, white, and not-particularly-flavorful flesh. What they do have is bones. Their Y-bones look more like snowflakes than letters. I have tried a variety of ways to get around this problem and found two: ceviche and sucker balls (recipe to follow).

Redhorse Run
All redhorse species make long, upstream spawning migrations. The exact seasonal movements aren’t well studied, but the timing is based on water temperature. At 45°F things start to happen and a few fish will start to show in my local creeks. Once streams hit 50°F, I stop being a responsible person until the run is over (usually around 65°F). The USGS publishes real-time water temperatures for many rivers, so you can know the best days to fish.

If you go looking for spawning redhorse, odds are you will find them either below a dam or on a rocky riffle some miles up a tributary. And, when you do, you will undoubtedly be shocked at the number of fish. Just keep in mind that finding a whole bunch of fish is not a good reason to kill a whole bunch of fish. You are likely seeing a large part of the population concentrated in one place. I recommend harvesting a few shorthead, golden, or silver redhorse for deep-fried sucker balls.

Slow Down
Redhorse are a fun and accessible angling challenge. They grow large and fight well. They aren’t simple to catch, but aren’t terribly hard either. They will go hunting for a worm, but they won’t chase it. Their sub-terminal mouth makes it difficult to catch food drifting by. Getting your bait to stop on the bottom is key.

I use a slip sinker rig with a 12-to 18-inch leader and a #8 circle hook. Because redhorse water is generally swift and rocky, I find my 1/2 oz. to 1 oz. slinky sinkers get the most use. But I always pack some 2 oz. weights just in case the fish are holding in faster or deeper water. A couple rods rigged like that and secured in forked sticks is a great way to take kids fishing. You can teach them to catch crayfish between bites.

For even more fun, wade downstream on a clear redhorse river. When you spot a redhorse, cast upstream of it and use the current and line tension to swing the bait towards it. If you can set the bait a foot in front of the fish, just wait. In clear water, you’ll see their nose twitch like a cartoon hound dog as they hone in. This is particularly fun with large, greater redhorse and river redhorse. Big specimens always have an “honor guard” swimming alongside and stealing food they scare up. The smaller fish, usually smallmouth bass, will often dart forward and grab your worm before it reaches the redhorse. If you want to get sick of catching 14-inch bass, go fishing for a 28-inch redhorse.

Don’t Keep Secrets
The spot my kids and I were fishing might have remained secret if the baitfeeder reel hadn’t started buzzing. Soon our spectators were looking at their first shorthead redhorse. Like everyone, they were struck by the dark red fins and bright, brassy scales. The rest of the conversation followed a predictable script. “Carp are an invasive minnow; these are a native sucker.” “Yes, they make great fish cakes.” “We actually have six species of redhorse in Minnesota.”

I can’t keep redhorse a secret because they, like all so-called “trash fish,” need as many friends as they can get. Go catch a bunch this spring, keep a few, and make your family a basket of sucker balls. If someone discovers your spot, welcome them into the club.

Sucker balls are great plain, but if you want a dipping sauce, a lemon aioli or remoulade will make an excellent addition. If you're cooking for kids, roll the balls in panko before frying. They’ll come out like round fish sticks.

Why do we consider some fish iconic and others aquatic refuse? In this series, we focus on American fishes not officially designated as “game fish.” These species, though native, get lumped into the category of “trash fish,” a distinction that’s more than just semantic. Game fish are managed differently by state and federal agencies. They get protection, research, money, and love. Trash fish don’t. We think that’s wrong. The scene opens on an...

Trash Fish Tuesday is a new project from the MeatEater Fishing Department investigating, explaining, and celebrating some of our misunderstood and under-appreciated native fishes.  There’s a whole lot more swimming around down there than bass, trout, walleye, and catfish. Just because you don’t know them doesn’t mean they’re trash. Enjoy. Our culture loves comebacks, Cinderella stories, and diamonds in the rough. Take for instance, the story of a...

The Beginner’s Guide To Bowfin Fishing

Over the years, I’ve found that anglers fall into one of three categories in regard to bowfin. They’re either pro-bow, anti-bow, or bow-curious. I’m so pro-bow I could be the president of the national bowfin fan club if such a thing existed, but I can’t say I’ve been a zealot my entire life. I only became bow-curious about seven years ago when a pro-bow buddy let me in on a local Jersey fishery practically in my backyard that I had absolutely no...