While the fog wisped off Kentucky Lake to reveal a rolling, silhouetted landscape, my mind remained socked in a haze. I was running so low on fumes  no energy drink could throttle me up. I tried—32 ounces worth. My tournament partner and I were, nevertheless, methodically casting along a flooded shoreline, searching for the first bite of our season-opening collegiate bass tournament.

We’d left campus in Madison, Wisconsin, the previous afternoon around 3:00 p.m. following a dreadful organic chemistry final. We arrived at the boat launch in Gilbertsville, Kentucky, after midnight as an earth-shaking thunderstorm opened up the night skies. Sleep didn’t materialize, thanks to torrential rain, unrelenting thunder, and a leaky truck topper—our “waterfront hotel room.” By 5:00 a.m. we were stumbling through a literal and figurative fog, preparing for the tournament.

Dreams of a fully sponsored boat and a future on the professional tournament trail bobbed through my sleep deprivation. Local reports indicated the lake’s bass were scattered in a mix of pre- and post-spawn patterns. But those reports didn’t matter—the overnight cold front dropped water temps, and overflowing creeks turned the lake to chocolate milk, classic lockjaw conditions for bass. As our morale fell to meet our energy levels, my half-ounce football jig hung up on some submerged brush, again—the only thing I could catch that morning. I raised my rod to pop it free, and then the drag began to scream.

Suddenly wide awake—adrenaline proving its superiority to caffeine again—one of Kentucky Lake’s famous bucketmouths plunged toward deeper water, challenging my resolve. The stout, medium-heavy flippin’ stick doubled over proving that this was undoubtedly the biggest bass of my life. Hell, landing this single fish might put us in the money. My partner prepared to lip the lunker boatside, but then let out some amalgamation of a disenchanted groan muddled with “sonuvabitch.” He hoisted a 26-inch freshwater drum over the gunwale—10 pounds of silver-scaled disappointment.

Nothing to write home about?
In some places, freshwater drum are nearly as ubiquitous as common carp. They’re assumed to be similar bottom-feeders, poor table fare, the standard excuses for calling a fish “trash.” Many anglers view drum as no more than a nuisance when targeting their beloved game fishes, and I joined their ranks on that dreary May morning. Under non-tournament circumstances, however, I wouldn’t lament the catch. As with the other native non-game fishes we’ve examined in Trash Fish Tuesday, freshwater drum deserve to be celebrated. But, in the realm of unjust “trash fish” labels, drum could very well be the overlooked of the overlooked. A wallflower of sorts, beautiful and misunderstood.

For comparison, bigmouth buffalo can be extremely long-lived and their populations are increasingly stressed by human impacts. They’ve received recent (and well-deserved) press. Drum, on the other hand, are fast growing, mostly ignored, and in relatively good shape population-wise. They’re even helping to control some invasive species.

Large drum can exceed 20 pounds, and the world record, caught in Tennessee, tipped the scales at over 54 pounds, but their commonplace qualities often outweigh their intrigue. Gars and bowfin are memorable, if nothing else, for their unusual and remarkable prehistoric appearance. Drum also possess a distinct appearance and, just like the aforementioned native species, put up a formidable battle. But, drum often wind up as by-catch for anglers specifically targeting other game fish. Like my own experience in the tournament, anglers think they’re tied into the bass or walleye of a lifetime, only to have it transmogrify at the boat into a freshwater croaker. This bait-and-switch disappointment leads to general disdain. Their fortitude and appearance gets subsumed by an emotional association with letdown, as though drum intentionally trick us.

Let’s clear the [water]
While disregarded across most of their range, drum are unique and ecologically important in their own right. Freshwater drum (Aplodinotus grunniens) belong to the Sciaenidae or drum and croaker family. But, they are the only species in this group that exclusively lives in freshwater. While closely related and similar in appearance to the revered red drum (aka redfish), a designated game fish found all along the Atlantic and Gulf coasts, freshwater drum are typically considered “rough fish.” They’re found up and down the eastern half of North America, from southern Saskatchewan to the Gulf Coast, and stretching into Central America. In northern regions, they are commonly called “sheepshead,” an erroneous comparison to a somewhat similar marine fish, actually named sheepshead. In parts of Cajun country and the southern U.S. where their endearing qualities have gained some traction among pockets of locals, they are commonly referred to as “gaspergou” (or “gaspers,” or “gous”), attributed to French, casse-burgeau, “to break a clam.”

Freshwater drum have heavy pharyngeal teeth, molar-like grinders in their throat, used to crush clams, mussels, and crayfish. These teeth are especially useful in ecosystems where drum are now forced to coexist with invasive zebra mussels—“gous” do their best to control these harmful non-native bivalves. In fact, they’re one of the only native fish that can consume zebra mussels. Moreover, the byproduct of drum chomping on mussels and other hard-shelled prey forms useful spawning substrate for game fishes like small- and largemouth bass. Filling important roles in the food web, drum also eat plankton and aquatic insects, and immature drum feed game fishes including walleye, bass, and catfish.

Like many marine drum and croaker relatives, freshwater drum can communicate by making “drumming” sounds via specialized muscles that vibrate against their air bladders. Think guitar strings resonating on a wooden guitar body. These sounds are believed to be associated with spawning behavior, lending to their name grunniens, Latin for “grunting.” And much like their acoustic melodies attract a mate, their filets attract gourmands in the know.

Swimming to the beat of their own drum
Arguably the greatest fallacy about drum is their worth as table fare. Contrary to public opinion, their unique flesh allows for diverse (and tasty) preparations, if you’re willing to give “gaspers” a fair shot.

Acclaimed field-to-table chef Jesse Griffiths is no stranger to the finer qualities of classic non-game fishes, including Trash Fish Tuesday alumni, gar and bowfin. He ranks gar among the best tasting freshwater fish, period, and serves bowfin caviar every New Year’s Eve at his Austin, Texas, restaurant, Dai Due. “Gaspergous,” however, get special regard and excitement. He doesn’t get them in the restaurant often, but when he does, usually as bycatch from a few remaining commercial trotliners in the area, his patrons “clean them up.”

“They’ve got such a distinct texture, like no other fish I’ve ever had. It’s firm to the touch, yet tender to the bite,” Griffiths explained. “It’s hard to equate it with something else.”

Perhaps this unfamiliarity is troublesome to anglers handling drum’s boneless filets for the first time, but Griffiths has “never had any experiences with drum that were off-putting.” Accordingly, following a taste test conducted by Ohio Sea Grant, 75% of respondents said their attitude toward drum improved after trying the fish, and an additional 21% indicated their attitude improved somewhat.

Griffiths’ prefers to slice filets thin and fry them hot. First, season the fillets with salt and pepper, then coat with a 50-50 mixture of buttermilk and yellow mustard before lightly breading with fine cornmeal and frying. The final product is delectable on its own or great in a fish taco. Similar to redfish, “gaspers,” as they are listed on his menu, also take nicely to grilling on the half-shell—filets grilled skin and scales on, scale-side down to protect the flesh.

“The flavor is mild and, because they are also fatty, they take on smoke really well,” Griffiths said. “It’s akin to marbling in steaks.”

For those looking to experience the full spectrum of “gaspergou” culinary options, chunks of their flesh can also be treated as “poor man’s lobster,” poached and served with cocktail sauce or butter.

So, even though you are apt to catch freshwater drum when you least expect it, there’s no reason to fret or despair, and certainly no reason to overlook these truly unique native fish. Enjoy the fight, and when the fog clears, Chef Jesse advises, “cook ‘em up and savor the difference.” Indeed, their unexpected difference may enlist you to the users of the hashtag, #gasperguru.

Freshwater ,
Freshwater Drum ,
Get the latest in your inbox
The MeatEater Newsletter has our picks for the week's best hunting, fishing, wild foods, and conservation content along with special deals and recommendations for subscribers. 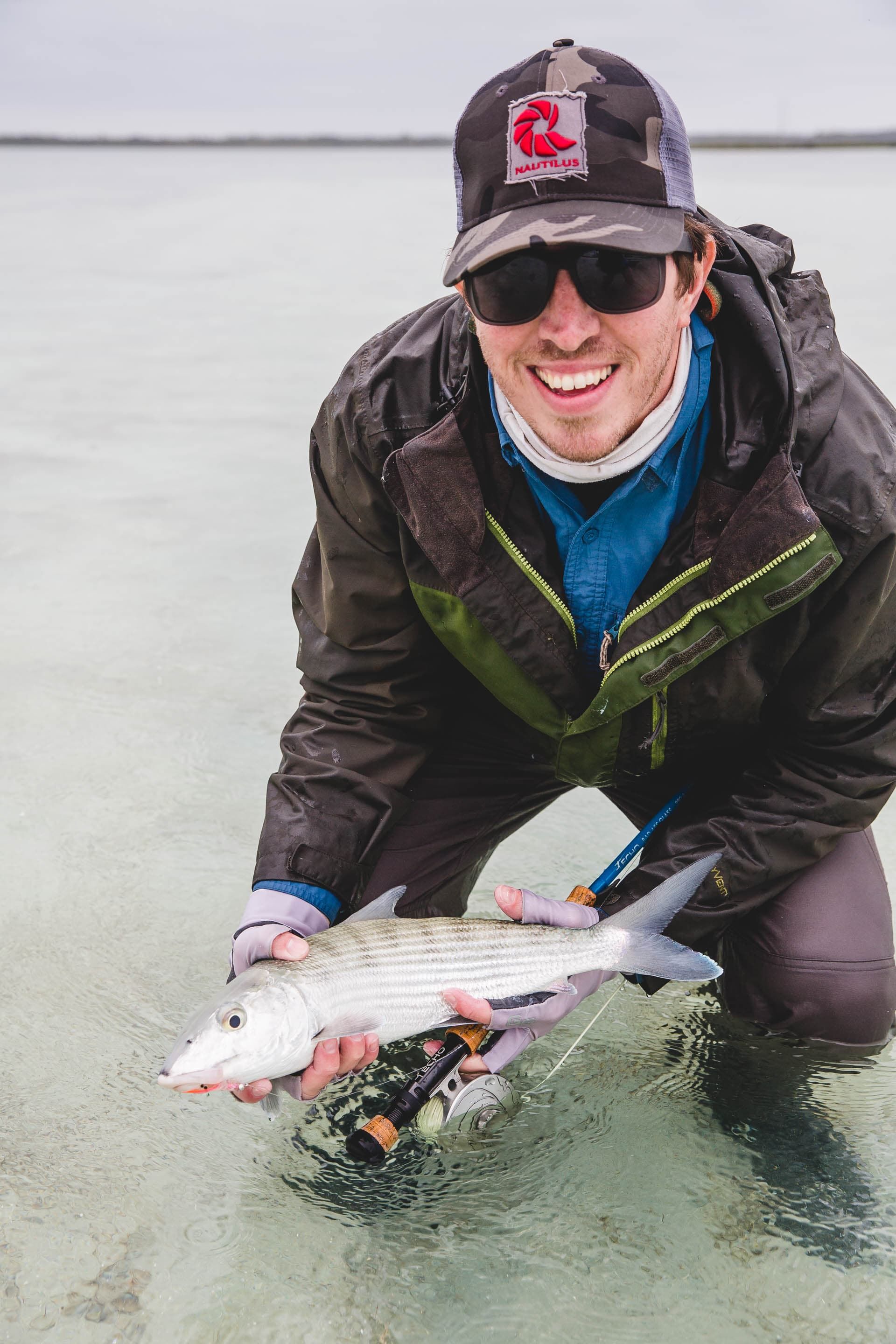