1)  It is no secret in the world of steelhead fishing that there are two distinct runs of steelhead. Appropriately termed “winter-run” and “summer-run” steelhead, it is a fair assumption that winter-run fish enter the freshwater system during the winter months, while summer-runs begin their migration earlier in the year during the spring and summer.

Beginning as early as November and continuing through May, winter-run fish enter the system at a relatively developed stage of maturation. Their bellies are robust; their time scarce and their attention concentrated.

Upon entering freshwater and undergoing the transition from saltwater to freshwater, winter-run fish have a limited time to spawn before their reproductive systems are ripe with sperm and eggs.

Conversely, summer-run fish begin to venture into freshwater as early as April, entering in abundance through the warmer months before beginning to trickle off by November. 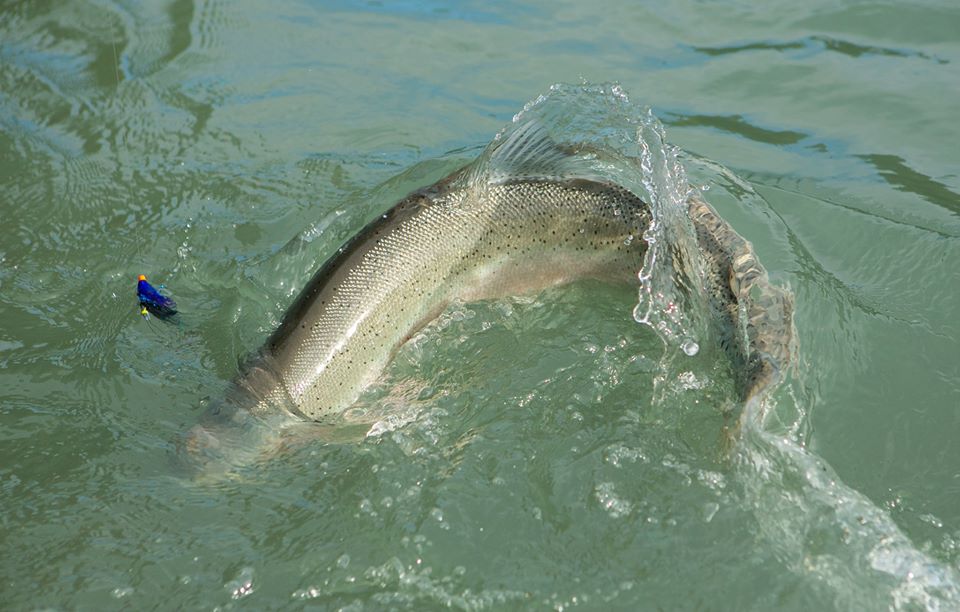 Sexual maturation in these summer fish differs substantially from their winter-run counterparts. Reproductive organs in summer-run steelhead do not begin to mature until after their transition from salt to freshwater. Historically harvested, it is documented that the entrails of retained steelhead were not only immature, they were near barren.

Mild weather and comfortable water temperatures increase the metabolisms of summer-run steelhead and their aggression is anything but subtle. These differences make summer-run fish a sought after quarry for many angling enthusiasts.

Despite the differences in their migration timing, both winter and summer-run fish typically spawn in the spring/early summer time frame. 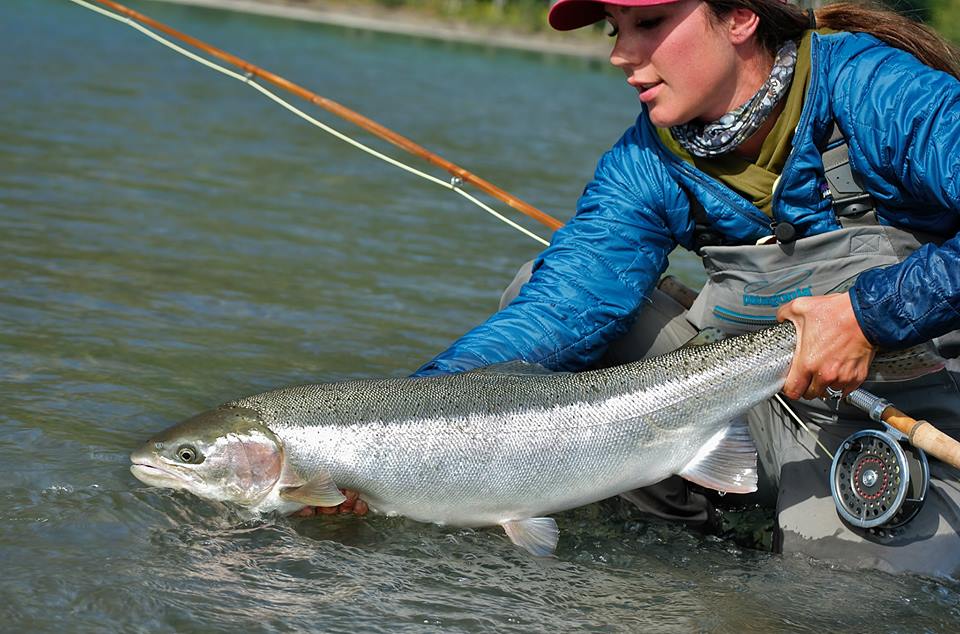 2)  Naturally, given the above data, timing is a vital factor of a steelhead’s migration pattern.  Maturation inevitably drives both summer and winter fish towards a schedule – one which is presumably more lax than the other. Winter fish, swollen and up against Mother nature’s clock, primarily dominate tributaries within 100 miles of the ocean. Summer fish on the other hand can spend up to a year in freshwater, historically traveling as far as 800 miles away from the salt. Both races of fish have been known to survive up to one year in freshwater without feeding in abundance. 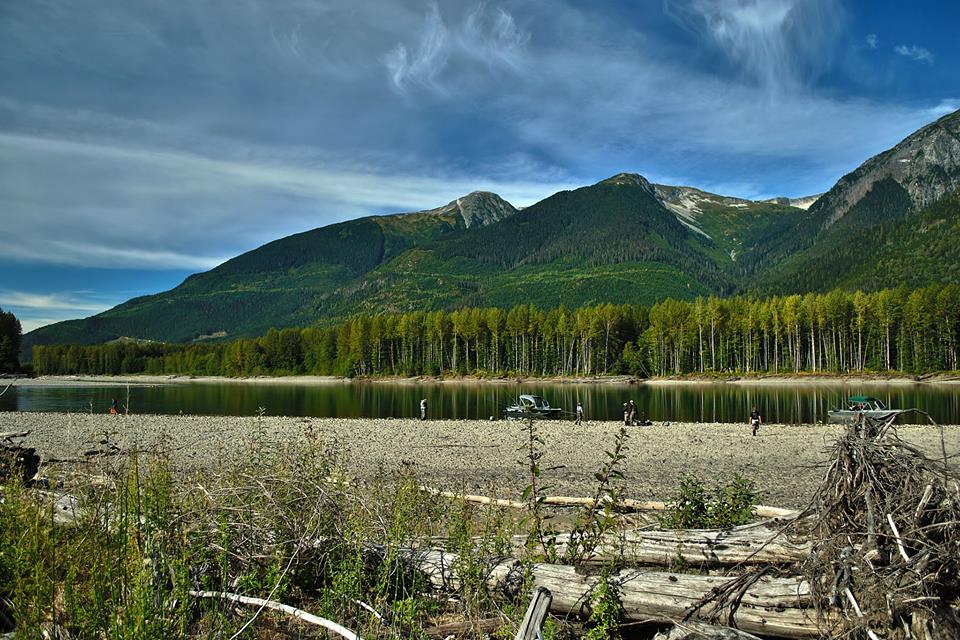 Battling long journeys and major obstacles, summer-runs often require the extra time allowance to ensure a punctual arrival to their spawning beds. Fish venturing further inland must factor the increased number of barriers into their journey so that they are able to time their travels accordingly.

While speaking to biologist Bill McMillan about this, he made note of a stream paralleling that of an obstacle course – complete with fourteen waterfalls and other contributing hindrances.  When I asked him how these fish know? His response was, “genetics”.

It makes me wonder how well our hatchery fish will fare in the ‘time management’ category. 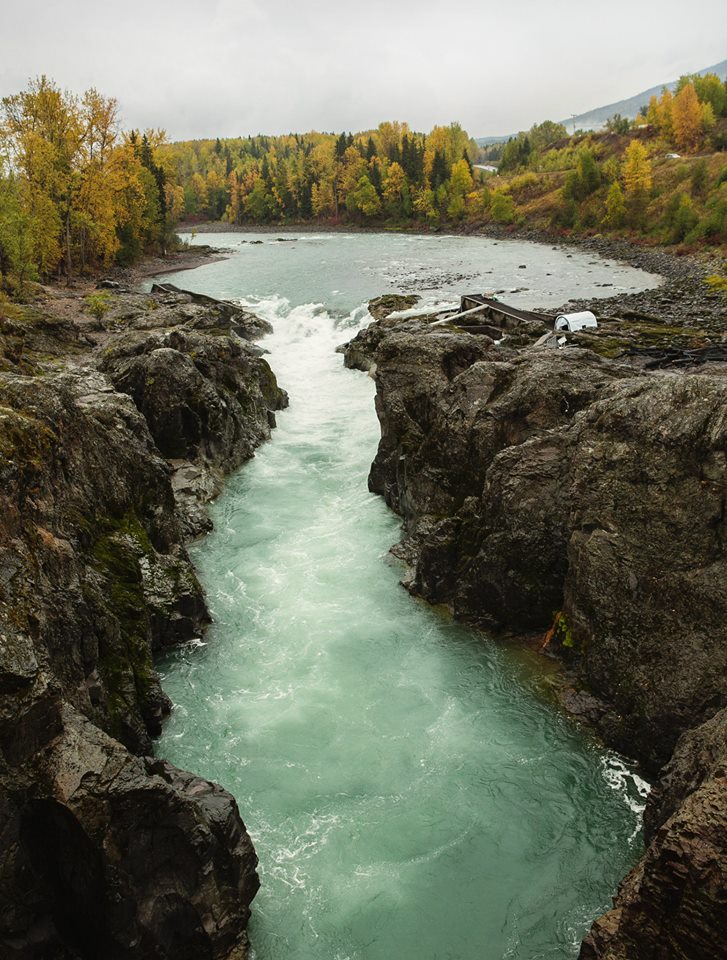 3)  Steelhead have otoliths or “earstones” in their head between the ears and behind the fleshy part of their brain.  An otolith is solidified calcium carbonate that serves as part of the hearing and balance system in fish. This calcium carbonate is primarily derived from water and, as its host grows older, new calcium carbonate crystals form allowing trace elements of water to bind with the otolith (causing layers to develop). All of this composition and build-up play a very important role for biologists.

From the otolith, a scientist is able to determine the age of the fish and the properties of water bodies that fish had previously occupied. In addition to being able to determine the specifics of the river system each fish has visited, the otolith plays a key role in showing how long a fish spent in both fresh and salt water. Additionally, it identifies individuals who’ve returned to freshwater to spawn more than once.

While scales also tell biologists specifics about fish age (they have rings on them similar to trees), scales can become damaged or misconfigured during spawning migration. Scales also have a tendency to reabsorb during times of weakened or decreased energy levels, thus securing analysis of the otolith as an extremely significant research tool.

4)  As steelhead are anadromous rainbow trout, their spawning habits are inevitably very similar. A unique fact unknown to many is that rainbow trout have the ability to fertilize steelhead eggs and vice versa.

John McMillan (Bill’s son) is a biologist who is currently conducting a major study on such data. He specifically takes note of the amount of lipid body fat within individual fish. An interesting find is that fish who are already healthy and not in desperate need to gain body mass are more likely to remain in the freshwater, avoiding the perils of an ocean commute entirely and indefinitely.

Comparatively, a fish low in body fat is much more likely to seek saltwater, where it will feed heavily until it has reached a substantial size.

High body fat content is often related to water temperatures, and cold water is a contributing factor to finding fish with higher lipid reserves.
The further down a river system one will venture, the warmer the water becomes and these fish become much more inclined to partake in anadromy (return to the ocean) as a result of lower body fat reserves. 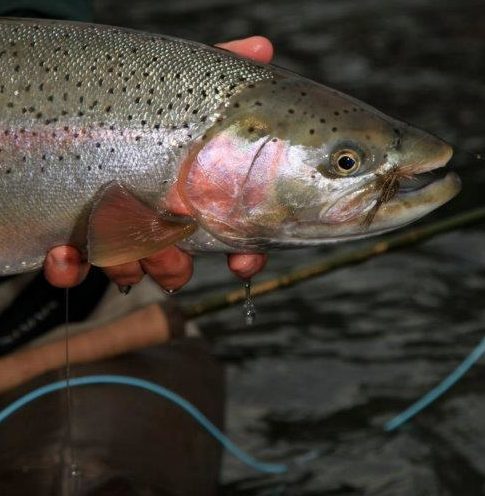 Research has shown that male juvenile steelhead (often assumed to be resident rainbows) have a higher inclination to remain in freshwater, as they have less demand to gain bulk than the egg-bearing females.  In addition to the advantages of security and fertile stream-beds, these male fish are able to spawn with the large ocean-run females – and they’re even more efficient than many of their anadromous counterparts in that they often spawn multiple times with multiple females!

5)  Steelhead are a species with an adaptivity beyond our comprehension. It is their wide array of life history choices that explain why they have been such a successful species through the years. Seeming to break all of the rules in areas of consistency, steelhead in some parts of Russia have been documented to spawn as many as ten times!

Regardless, it is undeniable that – try as these fish might – their survival rate is increasingly plummeting.

Equally as disconcerting is the misconception that all steelhead return to spawn again throughout their life cycle.

While it is true that a great number of steelhead do not decay, as the Pacific Salmon do upon spawning, it is an incorrect assumption that all steelhead survive their migration route after leaving freshwater.
Contrary to public belief, the majority of post-spawned steelhead do indeed perish as they attempt a migration back to the ocean.

Male fish have a very low respawn rate as they eject sperm multiple times while spawning, resulting in severe fatigue. Females only drop eggs once, thus slightly increasing their likelihood of survival.

Additionally, the respawn rate is lower on summer-run fish as they spend so much time in the system without food, and travel longer distances than winter fish.  Historically, the percentage of respawners in the northern and southern steelhead ranges fared higher than that of the central basins. In places such as Kamchatka, steelhead reached respawn rates as high as 70%, and southern ranges (like northern California) once averaged between 25-60%.
Presently, the average return spawning rate finds itself somewhere between 5-20% – with central regions like the upper Columbia tributaries ranging between 1-2% (largely in part due to the excessive damming).

All in all, it makes me wonder about my own contribution to the decreasing numbers of our steelhead stocks. Data indicates that in some systems steelhead are caught an average of 4 times during their commute (twice on their way up and twice on their way down). If the catch & release mortality rate ranges from 3-10% on a steelhead caught once, is it a relatively fair assumption that a quadruple capture might raise the mortality rate to 12-40%?

Such numbers cannot help but demand the attention of those who will listen. It’s a scary thought for a wild steelhead advocate, isn’t it?

Save this product
13 Fishing
Kalon O Blackout Spinning Reel
$79.99
At home both in open water and in the frozen tundra, 13 Fishing Kalon O Spinning Reels are performance-proven and tested by the most rugged and rowdy anglers we know.
Save this product
YETI
MeatEater Branded Yeti Hopper M30
$299.99
Whether you're into suds, brewskis, seltzers, or vino, if it comes in a can or bottle and is best served cold, the Hopper M30 is the ticket.
Save this product
Spiceology
Mermaid's Trident Zesty Seafood Blend
$9.99
A bright citrus-based blend that is balanced with earthy notes of smokey chardonnay and mild heat to round it out. This unique combination is incredibly versatile, perfectly pairs with your latest catch, fresh garden veggies, or atop roasted potatoes.
Save this product
13 Fishing
Inception Baitcast Reel
$120.00
A lightweight body and super low-profile design provide incredible comfort during long days on the water.
Save this product
13 Fishing
Omen Black Spinning Rod
$130.00
Japanese 36 Ton Toray Graphite , 4A Portuguese Cork Handle, ALPS 316 Stainless Steel Guides with Zirconia Inserts.
Save this product
YETI
LoadOut GoBox 30
The MeatEater crew uses our GoBoxes for storing all kinds of gear, from ammo and range hardware to outdoor kitchen essentials, dog accessories, fishing tackle, and gear, camera equipment, truck tools, and medical supplies. Why buy expensive hunting and outdoor gear only to store it in a cheap plastic bin with a lid that doesn't fit correctly? Elevate your gear protection and organization with this waterproof, dustproof, shockproof, and critter...
Get the latest in your inbox
Subscribe to our newsletters to receive regular emails with hand-picked content, gear recommendations, and special deals.
Our picks for the week's best content and gear
For the whitetail obsessed, with Mark Kenyon
Redefining our connection to food, with Danielle Prewett
Your one-stop for everything waterfowl, with Sean Weaver
Get out on the water with the MeatEater Fishing crew
Technical hunting apparel
Purpose-built accessories for hunting and fishing
Quality elk, turkey, waterfowl, and deer calls
Privacy Policy

Steelhead Terminology You Should Know

He stared at me vacantly, his back hunched over and arms in an awkward fold.  His bottom hand lingered uncertainly on the butt of his Spey rod. “The what?!”  He asked, squinting his eyes as though I had just requested he perform some sort of risqué musical striptease. I laughed and repeated myself, “The dangle!  Let your fly hit a true dangle…” I stumbled over the rocks to reach close proximity to his ears and proceeded to explain what I was...

My first guiding job was hardly glamorous.  A sturgeon and Pacific salmon guide on the Fraser river, I spent my summer mornings motoring through swirling back-eddies, and gaffing floating, rotten salmon. I cringed at the soft, furry flesh that tore under the dulling prong, the light meat plump and glistening with water-bloat and bacterial rot. Sticky roe balls wrapped in women’s nylons were almost appetizing when compared to such “salmon stink...

For a sport so consistently full of inconsistencies, it’s a wonder why steelheaders put so much emphasis on the perfectly sculpted Spey cast.  With variety that could rival a box of chocolates, each angler not only fishes differently to one another, but casts with their own flavor as well. There are the anglers who are more concerned with their cast than their hookup ratio, and the anglers who are hopeful to simply land their fly in the water...