On the morning of Dec. 19, a rancher in Jackson County, Colorado, found a dead domestic calf surrounded by very large dog tracks. The Colorado Parks and Wildlife Department responded and conducted a field investigation, including a necropsy on the carcass to look for evidence of attack wounds.

“The results of this investigation indicated wolf tracks in the immediate vicinity of the carcass and wounds on the calf consistent with wolf depredation,” CPW Area Wildlife Manager Kris Middledorf said in a press release. This is the first such instance in the modern era, happening in advance of a plan to “reintroduce” wolves to the state.

In November of 2020, Colorado voters passed the ballot initiative Proposition 114, which requires the CPW Commission to create and carry out a plan to reintroduce and manage gray wolves by the end of 2023. The measure ensures that the commission will distribute state funds for "fair compensation to owners of livestock for any losses of livestock caused by gray wolves."

Because the state has yet to decide how to handle livestock depredation by wolves, this calf will be processed as if a bear or mountain lion killed it.

“CPW is working on draft regulations for the commission’s consideration on hazing for these naturally migrating wolves in the state.” CPW Director Dan Prenzlow said. “Our goal is to provide producers with resources to minimize the likelihood of conflict or depredation as we work to create a statewide wolf restoration and management program as directed under Proposition 114.”

This past spring, Colorado became host to a litter of wolf pups—the first seen in the Centennial State since the 1940s. Not coincidentally, these pups were spotted near a den located in Jackson County.

Jackson County abuts the Wyoming border in north-central Colorado and is one of many rural counties that opposed the ballot measure. While the densely populated front range urban area is responsible for the majority of votes in favor of the proposition, the reintroduction will more significantly impact rural regions with high populations of livestock and elk. 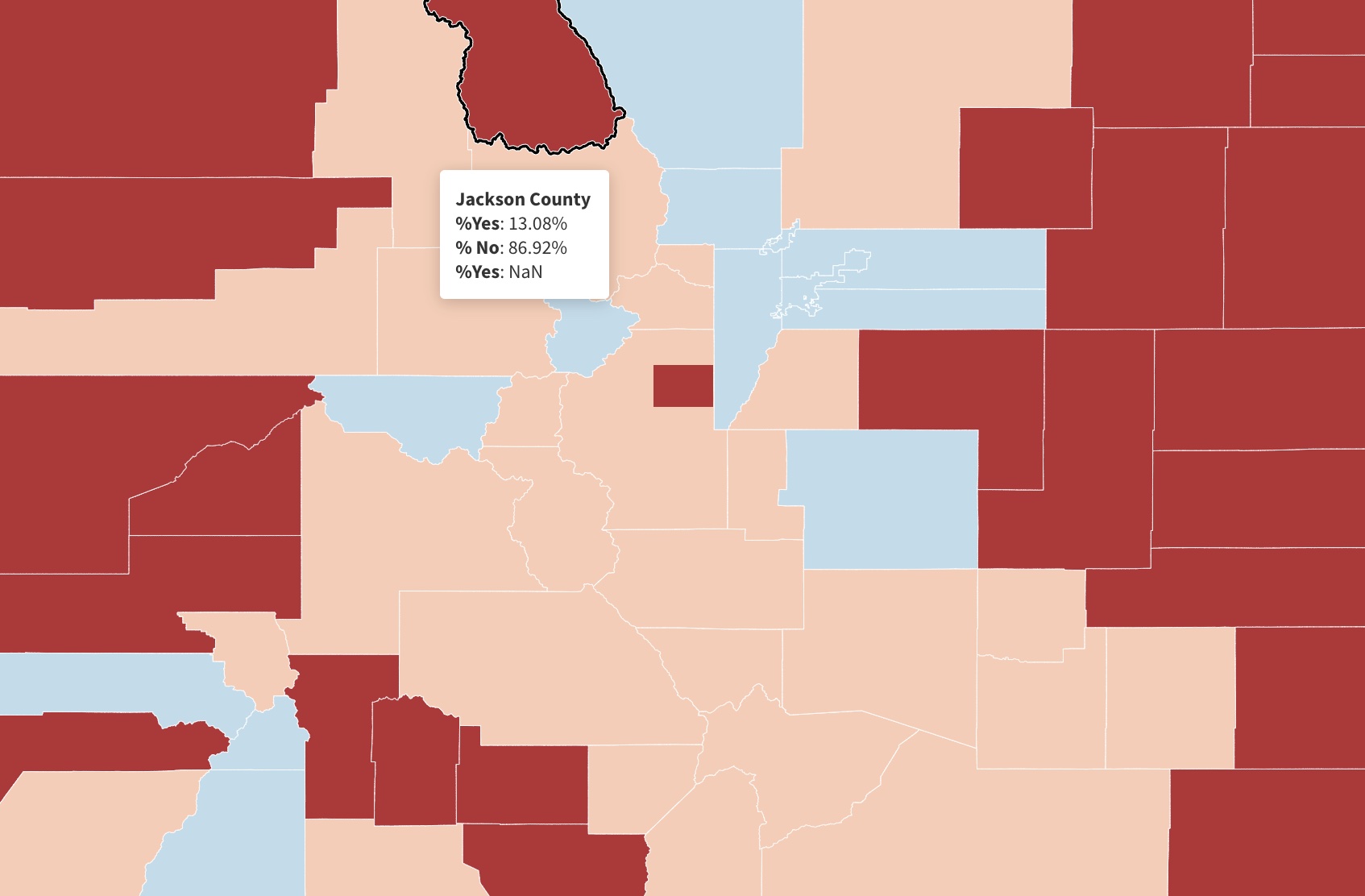 Map via KDVR depicting how Colorado voted for Prop 114 by county.

CPW is still in the public engagement process of establishing how and where to release wolves by holding frequent public meetings and utilizing both a technical working group and a stakeholder advisory group.

MeatEater's own Brody Henderson has previously reported on the natural incursion of gray wolves into Colorado.

"Here we are a couple years later with the first wolf predation of domesticated livestock in the state in 70 years," Henderson said. "Keep in mind, these wolves moved into Colorado and set up shop all on their own. At this point, what’s the point of wasting time, money, and resources reintroducing more gray wolves when CPW is going to have their hands full managing the wolves that are already there?"

Should Wolves be Reintroduced to Colorado?

My home state of Colorado is ground zero for the latest battle over wolves. A proposal to reintroduce wolves here has garnered enough signatures to make the ballot this fall. Voters will be asked to approve a measure to bring wolves back to the state. Now there’s a wildlife management storm brewing that has divided the state into passionate but predictable factions. But first, a little history lesson. Will History Repeat Itself? Two decades have...

Wolves may be the most contentious wild animals in North America. Where they are or aren’t dominates the minds of hunters, conservationists, animal rights activists, politicians, and bureaucrats year-round. Today, when the debate isn’t over whether or not wolves should be listed under the Endangered Species Act, it’s about reintroduction. And Colorado is on the front lines. MeatEater's own Maggie Hudlow and Brody Henderson have previously...

On Mar. 3, two men poached wolves by helicopter in Montana’s Big Hole Valley. Neither Dalton Tamcke of Wisdom nor Justin Peterson of Dillon had wolf tags or permission to hunt on the Mark Clemow Ranch where they shot the wolves. Killing wolves from a helicopter is illegal in Montana. Tamcke and Peterson turned themselves in and told wardens they mistook the wolves for coyotes, which they were trying to kill to protect livestock. According to the...