A pair of grackles near Stoughton, Wisconsin, learned the hard way in early June that red foxes can climb trees far better than what humans often claim in common lore and nature books.

The grackles lost their entire hatch to a red fox, which had little trouble raiding the nest 18 feet up a spruce tree. Eric Christensen documented the feat with his camera as the fox trotted off with a mouthful of grackle chicks.

Christensen, 50, is an amateur photographer and often watches from his home’s windows for birds and wildlife. His backyard abuts a 12-acre undeveloped property, which provides glimpses of the seasonal cycles of birds and mammals. That’s why he keeps his Nikon and Tamron 150-600mm zoom lens handy while drinking coffee each morning.

Christensen knows of a red fox den site about 400 to 500 yards away, but he doesn't expect to see foxes crossing his yard in daylight except when they’re tending their young. While making coffee a morning or two after Memorial Day, Christensen saw a reddish-orange streak in his peripheral vision. A split-second later, just as he identified it as a red fox on the run, the lithe animal leaped about 4 feet high into the bottom branches of a spruce and disappeared into its dense green interior.

Christensen grabbed his camera gear and sneaked quickly out the door. “Once I stepped outside, I could see branches moving and flashes of red 18 feet up the tree,” he said. “Just as I got focused, it came down the tree, jumped to the ground, and started across the yard with a mouth full of black feathers. It was raining pretty good at the time. It stopped and dropped its load for a second, shook the water from its fur, picked up the grackle chicks, and headed toward its den to feed its kits. I got some more photos of it up in the tree when it returned 15 minutes later. I’m not sure what happened up there, but it didn’t bring down any more chicks.” 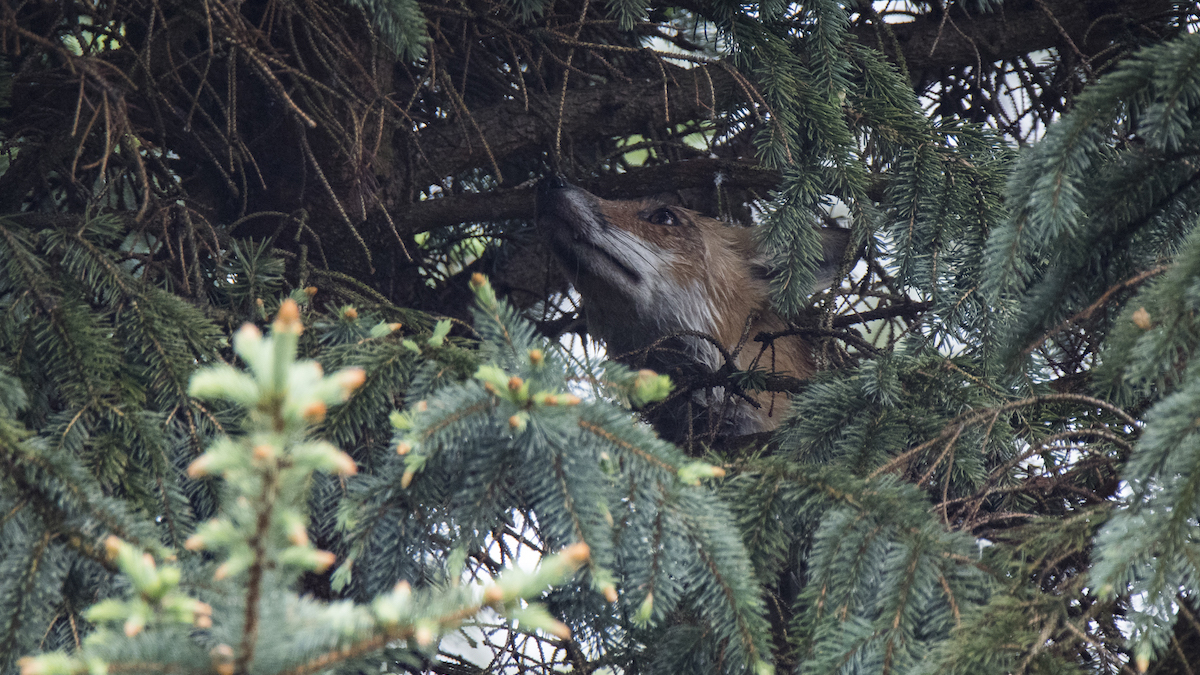 Christensen said he had always heard that red foxes, unlike gray foxes, struggle to climb trees.

“This critter not only climbed the tree, but it had no trouble walking out on the branches,” he said. “It was very sure-footed. I did some ‘Googling’ to figure out how odd this was, and found the usual story: Gray foxes are adept climbers and red foxes are not. I know coon hounds sometimes get into a tree’s lower branches and go up, but I had trimmed off all the branches 4 feet and below. That fox took a running leap and shot up the tree. I doubt that was its first climb. It went right up there and started harvesting.”

Scott Craven, a retired University of Wisconsin-Madison wildlife professor, said “the party line” is that red foxes and coyotes aren’t natural climbers. He said gray foxes easily climb trees because they have flexible, rotating wrists and partially retractable claws. A red fox, however, has fixed claws that are better suited for digging dirt.

Craven also said he has a healthy respect for the red fox’s ability to assess situations and adapt strategies to capitalize. That flexibility allows red foxes to live among humans at the edge of towns and inside suburban neighborhoods.

“I’ve heard plenty of reports where people go outdoors for cocktail hour, and a red fox living under their tool shed shows up on the corner of their patio,” Craven said. “It will sit and patiently wait for someone to flick it a piece of cheese or summer sausage. They’re smart. It might not have the natural climbing skills of a gray fox, but it can leap 4, 5, or 6 feet high. With a running start, it could easily leap into a tree’s lower branches and scramble branch to branch to a bird’s nest. They’re very agile.”

Christensen said he, too, was surprised but not shocked to see the red fox’s success. 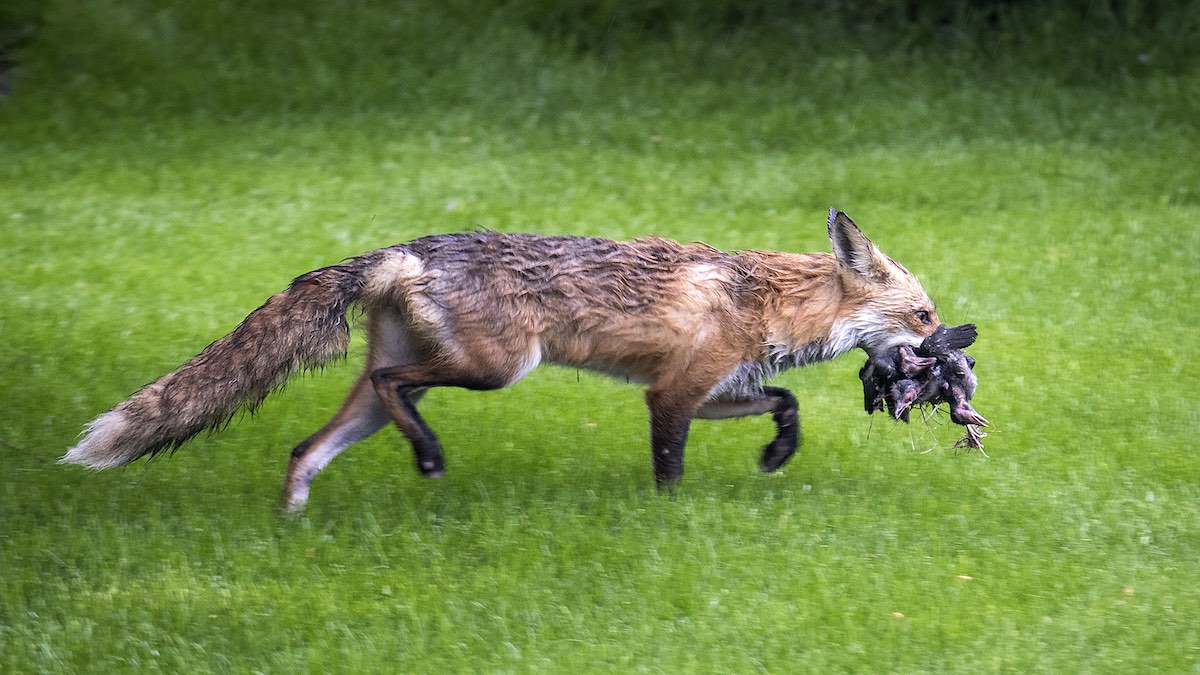 “The more time you spend outdoors, the more unusual things you see,” he said. “The weekend before, I was turkey hunting and glassing a jake. I lost him for a second and then saw another movement and started following it. It was an otter running through the cornfield. We don’t see many otters around here. Later that day, I saw a turkey standing knee-deep in a pond. My sense of how things should be got twisted around those few days.”

And judging by the fox’s aggressive, fast-strike raid on the nest, Christensen knew the grackle parents couldn’t mount a credible defense.

“Birds have a pecking order, and the grackle is near the top,” he said. “I’ve seen them chase chipmunks and smaller birds off a food source, and they’ll kick cardinals off my feeders. I’ve even seen them strut like a turkey to impress each other. But they’re no match for a fox.”

They’re also not granola-eating peaceniks. Given the opportunity, grackles will drive songbirds from their nests and devour their eggs or nestlings. They’re also notorious for raiding gardeners’ crops and destroying berries. So, weep not for the grackle and its nestlings. It would probably just curse your sympathies anyway, and then start renesting while seeking its next meal of flesh or fruit. 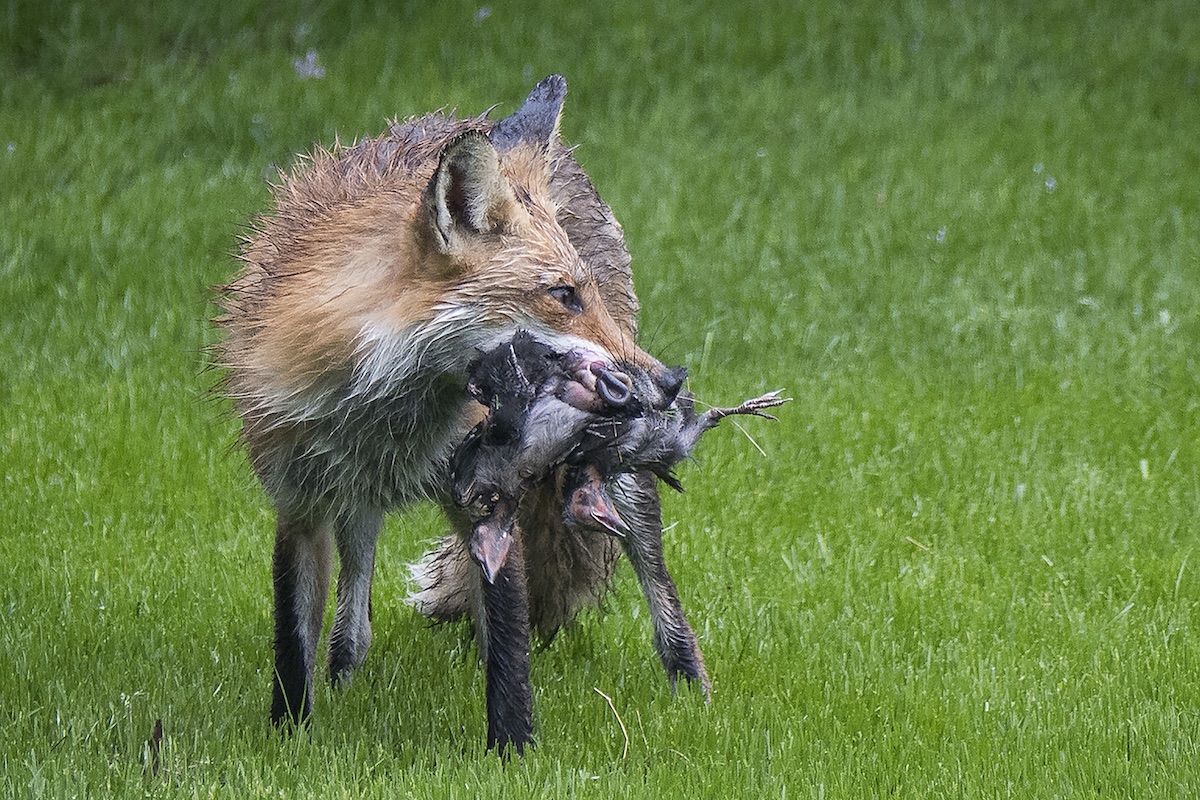 Elk hunters were among the first in line to object to wolf reintroduction in the Lower 48, but a new study suggests that mountain lion hunters may have had even greater cause for concern. “The big take home of this paper is that wolves have the strongest effect on the survival and abundance of mountain lions in the system,” Dr. Mark Elbroch told MeatEater. Elbroch is the lead author of the study and the puma program director for Panthera, a wild...

How to Predator-Proof Big Game Herds

Maybe you’ve been there: You’re hunting and haven’t seen a hoofprint all day. Then there are tracks tearing up the snow—but instead of deer or elk, they are wolf, bear, or mountain lion. As predator populations have expanded across the West in recent decades, so has the debate about what to do about it. On one end, some frustrated folks want to call in the gunships, post bounties, or throw open the rule book against carnivores. While those...

On May 23, a raccoon climbed into a bald eagle nest and wrestled a six-week-old eaglet to its death. The footage was captured by the Xcel Energy Fort St. Vrain eagle nest live feed. The 24-hour surveillance footage was live-streamed on YouTube. Colorado Parks and Wildlife (CPW) said that wildlife officer Mike Grooms responded to investigate 90 minutes after the attack. “The camera showed a raccoon scaling to the top of the nest tree and grabbing...