A family boated a bit more than they expected during the Alabama Deep Sea Fishing Rodeo on Friday, July 15.

April Jones was fishing with her son, husband, and father-in-law, when suddenly she felt something large hit her body. At first she thought it was a wave, she told AL.com. Then Jones turned around and saw a huge, 400-pound spotted eagle ray flopping around in the back of the boat. 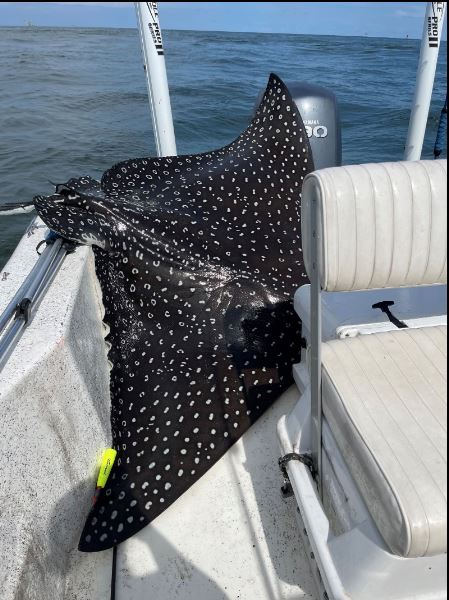 The spotted eagle ray had launched itself out of the ocean and into the boat in distress. It was thought to have a remora, or suckerfish, attached to it, which Jones theorized may have been the cause for its distressful jump.

According to the Georgia Aquarium, spotted eagle rays get their name from the unique shape of their snouts, which are round and pointed at the tip, resembling a bird’s beak. It is not uncommon for them to grow up to 16 feet long and weigh more than 500 pounds. Females typically grow larger than males.

Despite their size, eagle rays are graceful swimmers that can leap above the surface several times in a row.

The Jones family, who at the time were near the Sand Island Lighthouse off Dauphin Island, attempted to lift her up to return her to the water, but she was too heavy.

They headed to the nearest launch to get help, which happened to be located at the Alabama Aquarium’s Dauphin Island Sea Lab. During the 20-minute ride to back to shore, they poured water on the eagle ray to keep her alive.

When they got to the boat ramp, people nearby rushed to help to lift the heavy spotted eagle ray off the boat and release her back to the water.

Once they lifted the eagle ray, they discovered that she had given birth to four pups while onboard. 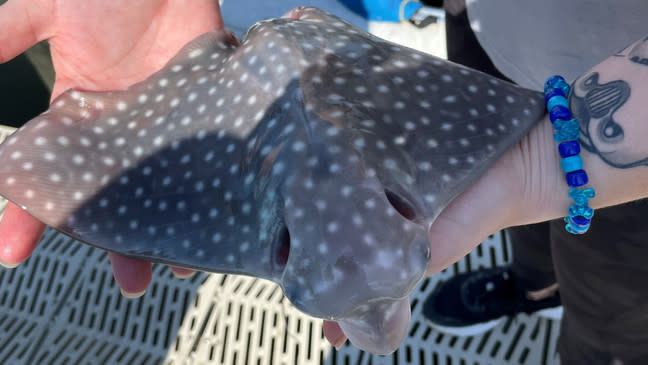 "It's not uncommon for wild animals to release their young when they feel their life is in danger,” Brian Jones, curator of the Alabama Aquarium’s Dauphin Island Sea Lab, told Fox News. “Ray species are known to produce young when captured by fishermen. Occasionally, these young are fully developed and are able to swim away successfully. At other times, the young are produced prematurely and do not survive."

All four pups were found deceased and donated to the Alabama Aquarium’s Dauphin Island Sea Lab.

Jones later sought emergency care for her the injuries she sustained when the eagle ray collided with her mid-leap. She was diagnosed with a shoulder strain and sore collar bone from the impact. Spotted eagle rays have venomous spines on their tails that they use when feeling threatened, luckily Jones was not stung.

It's a cat-eat-bird world out there most days. Seriously, house cats are responsible for killing millions, some claim billions, of birds every year. But this eagle documented in Southwestern Florida turned the tables and scored one for the featherd fallen. The video shows one eagle bringing a feline feast to a nest occupied by its mate and two young eaglets. Nature really is metal.

A Georgia couple received citations last week after they were spotted perusing the dog food aisle of a local Walmart with their “pet” deer fawn in tow. The sight of the newborn whitetail in the Grovetown, Georgia, Walmart Supercenter apparently alarmed the employees, who immediately contacted the Columbia County Sheriff’s Office. Officers then enlisted the help of local game wardens. According to the News & Observer, the couple had already left...

On October 9, Colorado Parks and Wildlife officials successfully removed a tire from the neck of a bull elk that had been toting the spare for over two years. A CPW officer first spotted the bull with a tire stuck around its neck in July 2019 while on a sheep count in the Mount Evans Wilderness. First sighting of elk with tire on neck via Jared Lamb, CPW. The bull resurfaced this May, and officials made four attempts to catch him in the Pleasant...