One of the oldest methods of fish trapping might be exactly what today’s fisheries need.  Pound nets — short for impoundment — are an assembly of pilings (or anchors) with netting attached to them.  The method’s origin is difficult to determine, as some accounts state that the traps were used by Native Americans before the arrival of Europeans, while others state that the method was actually developed in Scotland before coming to North America with arriving immigrants.

When set to catch salmon, the pound nets were positioned to redirect the fish into their holding cell as they made their way up the shoreline.  The structures were often set up temporarily during the migration, commonly placed at the mouth of spawning streams to stop migrating fish from reaching their final destination. Much like a fence, the nets were strung from pole to pole, taking up the entire water column from the high water mark to the river (or estuary) floor.  The trap jutted out 90 degrees from the shoreline, acting as an impassable barrier.  In these cases, the netted fence lead to a series of walls and compartments, essentially corralling the fish into what is called the heart of the trap.  Here the fish could swim freely until the fisherman came to collect his catch.  This collection happened by either handling each fish individually, or with the use of a netting bag, which was then hoisted aboard a nearby boat. 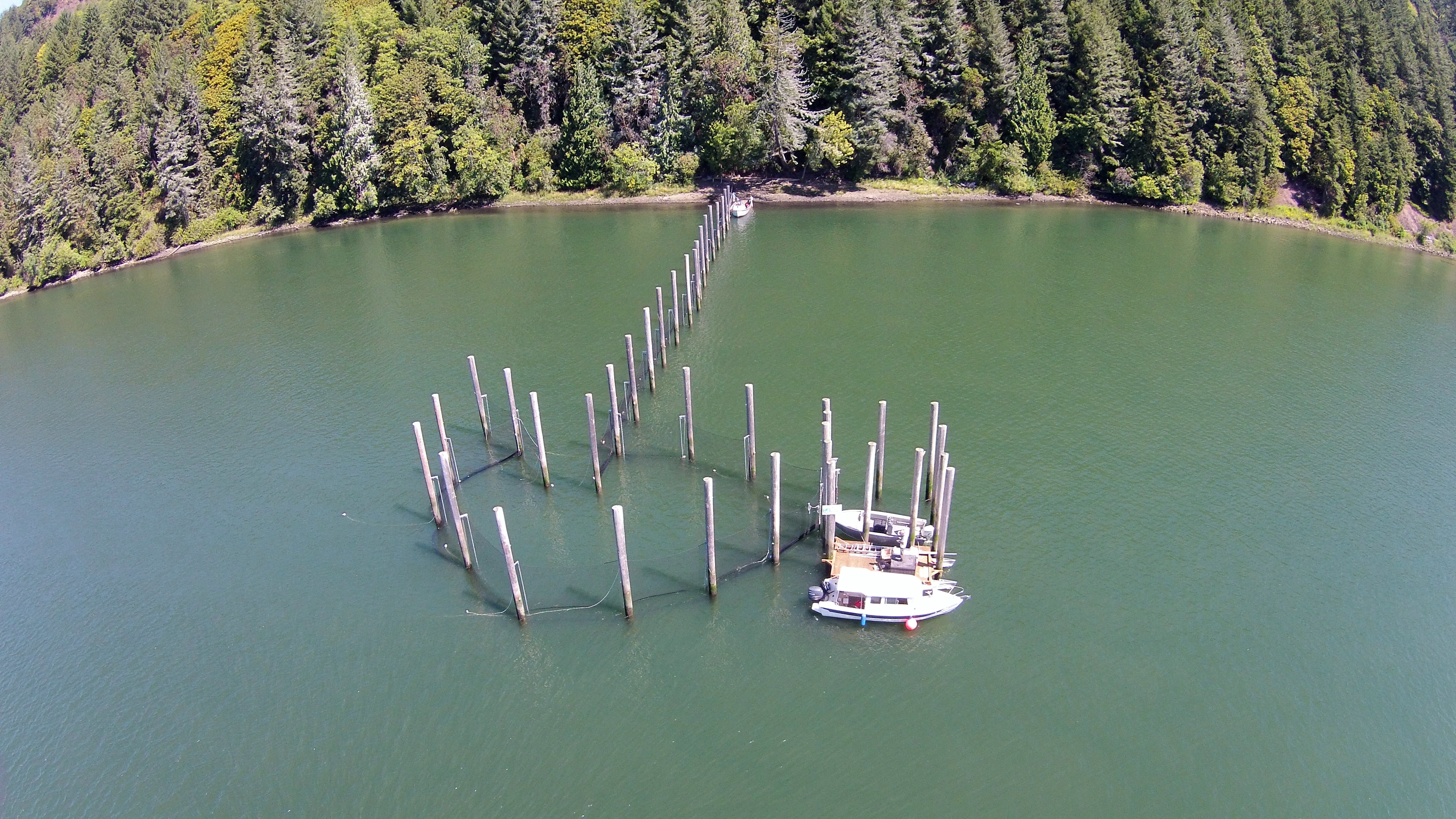 The nets aren’t limited to freshwater.  In the past they’ve been used to trap various species in both fresh and salt water.  In the late 1800’s and early 1900’s, Jersey Shore was a major player in the pound net industry.  Using poles up to seventy feet long, they set traps within a half mile from shore.  Nets containing cod, bluefish, tuna, sharks, herring and other by-catch were brought ashore to be sorted, put on ice, and shipped to the markets.  It was a popular sight-seeing event in its day.  Once the ships brought the fish in to shore, large Clydesdale horses helped haul the smaller skiffs ashore.  According to the New Jersey Courier, by 1914, 128 licensed pound net operations employed six hundred men, racking up more than thirty million pounds of fish in one year alone.

The method was introduced to Great Lake fisheries in the late 1830’s, and by the 1850’s it was popular across the country.  In the Pacific Northwest, pound nets were first used on the Columbia River.  For over a century, they proved to be incredibly successful trapping fish in abundance — perhaps too successful.  Traps in Puget Sound and Alaska were some of the biggest producers, with a single trap able to capture up to 1.2 million salmon in a season.  Fish were left in the water without over-handling, entanglement, or air exposure — meaning their quality was topnotch.  But the impressive success of the traps eventually became the downfall of the industry.  Gill-netters saw the traps as a way for canneries to reap the reward with minimal labour costs, and the public was outraged by rapidly declining fish numbers.  As gill-netters dug their heels into the issue, Washington State banned pound net operations in 1934.  From there, an accumulation of political pressure, poor fishing, and disastrous storms resulted in the industry going under by the early 1950’s.  The trap’s efficiency was all too much at a time when few, if any, regulations were in place. 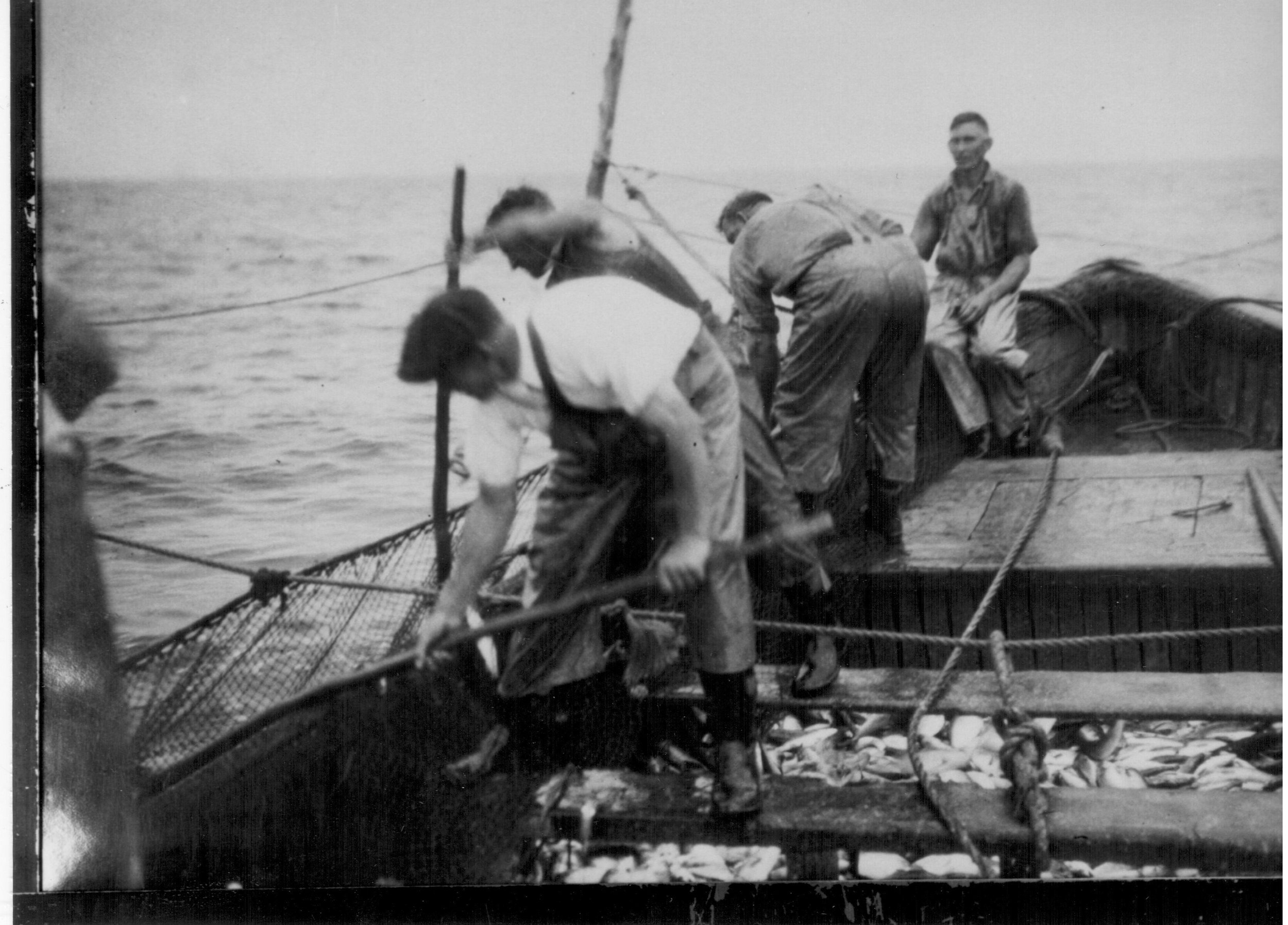 Today, fisheries on the west-coast are more sensitive than ever before.  With commercial fishermen accidentally intercepting steelhead and salmon in their nets, the by-catch has slowly taken its toll on fisheries that were already in dire straights.  The Thompson river, a tributary to BC’s Fraser river, is a prime example of steelhead being caught up in commercial salmon harvests.  With less than 200 fish in the once mighty system, it’s understandable that there is upset about how susceptible these fish are to being mishandled.  But what if there was a way to safely release each fish that was accidentally caught?  The Wild Fish Conservancy (WFC) wondered exactly that.

In 2013, the WFC teamed up with commercial fisherman, Blair Peterson, to develop a pound net prototype in Washington; the first in nearly eighty years.  With today’s regulations, public interest, and a little hindsight, the WFC and Blair decided they could collect data from a trial run.  Using old blueprints from Blair’s grandfather, they constructed the trap in the Cathlamet Channel of Wahkiakum County at river mile 42, where traps had once been located.

All odds seemed to be in favour of the revival.  Pound nets emit zero carbon, require little maintenance, and are more gentle on the fish.  Whereas most commercial fishing practices entangle fish in their teeth or gills, which often results in injury or death, pound nets simply house the fish, where they swim freely until ready for harvest.  Here they receive little to no air exposure, human handling, or over-crowding — factors known to elevate plasma lactate and cortisol concentrations in fish.  This means targeted fish can be taken, while by-catch can be released without ever even leaving the water.  In the case of the WFC study, the focus was “efficient hatchery harvest and significant reductions in by-catch mortality.”  It was anticipated that retained fish would meet quality standards, and by-catch be released unharmed.  Their plan was to conduct a post-release survival study to evaluate catchment, mortality, and operations to ultimately determine if responsibly used pound nets might act as an alternative to commercial gear and harvest techniques.  If so, the clearly clipped hatchery fish can be harvested (hatchery fish have their adipose fin removed when they’re juveniles), and the wild fish released without harm. 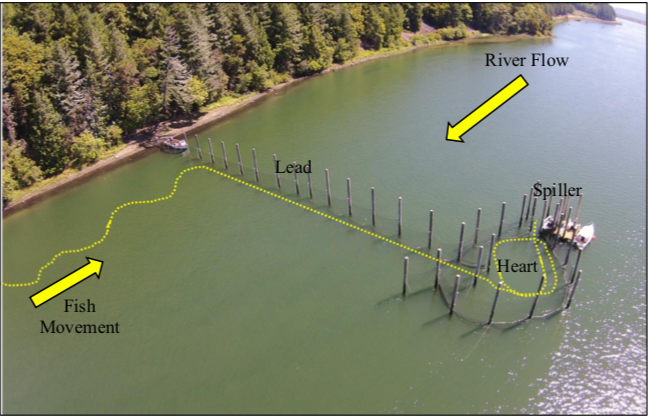 Between August 26th, 2017 and September 29th, 2017, a modified trap was built and operated in various light levels, tidal periods, and weather conditions.  Using Passive Integrated Transponder (PIT) tags,  trap-survival was calculated by comparing the tag detections of post-released fish at upstream dams to a control source of fish.  Over the thirty-three day test period, WFC and Mr. Peterson trapped and released 7,129 salmonoids.  Post-release survival ranged from 94% for steelhead to 99.6% for Chinook salmon — a vast improvement to current methods.  According to the WFC report, tanglenets, beach seines, and purse seines are detrimental to wild steelhead recovery.  Even when operated cautiously, records show that Fall Chinook salmon exhibit 21% mortality when caught with tanglenets, 44% mortality with beach seines, 22% with purse seines, and between 35-70% with conventional gillnets.

In this case the trap was fished for 258.17 hours over the thirty days.  In that time, 2,144 salmonoids were captured — the majority of them being steelhead.  More specifically, 816 of them were steelhead, 787 were coho, and 543 were fall chinook.  Once the fish were spilled into the live well, each fish was sorted, measured, and documented.  A remarkable amount of them were released in lively, healthy condition, and of the 2,144 captured salmonoids, there were only nine fatalities (all of which were coho jacks), bringing the survival rate to 99.58%.  Immediate survival of adult Chinook, coho, and steelhead was approximately 100%.

These are staggering numbers that beg for more research.  A method of fishing that was once problematic due to its efficiency might be the perfect tool for today’s regulated waters and forward-thinking consumers.  While the study is still in its infancy, it is gaining interest among fishermen and resource managers who are keen to help resolve the mixed-stock harvest dilemma in the Columbia River and other sensitive fisheries.  It raises the question of commercial fishermen and a processor teaming together to partake in a co-op with relatively minimal overhead (the WFC estimates that a trap can be built for $90,000 USD), and further increase its value by branding itself as sustainable.  There might even be a market for those who are simply wanting to spectate — much like it once was in Jersey Shore.

The trial-run clearly shows that pound net traps are capable of capturing commercially viable numbers of salmon, and can do so with high survival rates.  As humans, we learn from our mistakes so that we can utilise that knowledge to make better decisions for our future.  Pound net traps may be the perfect example of re-introducing the past, in hopes they may give us healthy fisheries tomorrow.

The Fish Trap from North Fork Studios on Vimeo.

This article comes from the Bent Fishing Podcast’s “Fish News” segment, where hosts Joe Cermele and Miles Nolte go head-to-head to find and report the most interesting and amusing fishy stories across sources far and wide—from respected scientific journals to trashy tabloids. We all know that 2020 was a rough year for humans, but 2021 is shaping up to be a particularly tough year for fish. Across the United States, fish populations are having a...

American fly fishing pioneer Lee Wulff famously stated that “A gamefish is too valuable to only be caught once.” Wulff was an early advocate of catch-and-release fishing regulations that eventually became a widely used management tool in the United States. As a fly fishing trout guide, catch and release is at the core of my job description. I’m sometimes forced to tell my clients I’d be shooting myself in the foot if I allowed them to keep a...