Fishing Essentials: Why I Use the Watermaster Inflatable Raft

Some of my favourite days have been spent rowing a raft downriver.  Quiet and stealthy, only the sound of the oars interrupt nature’s subtle hum, and the animals, anglers and fish are left mostly unbothered.  The silence is a refreshing change to the increasing amount of jet boats on our waterways. 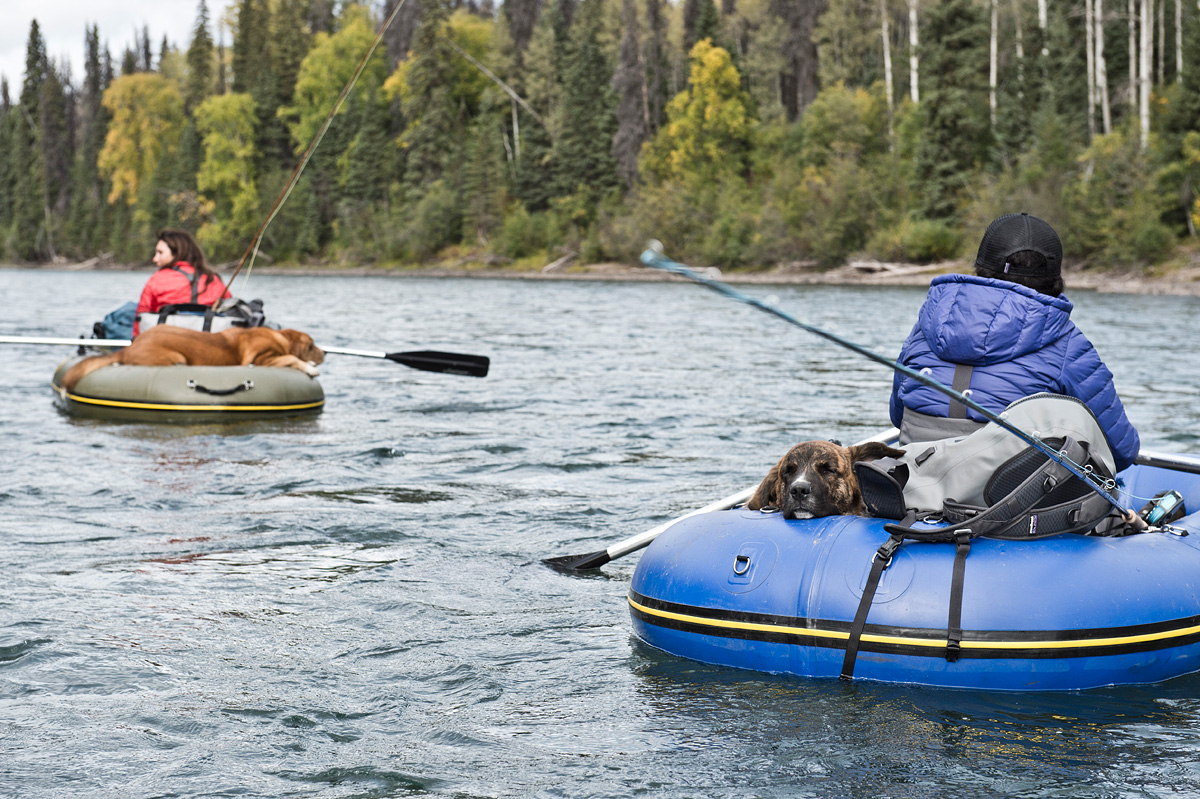 Today, all sorts of watercraft frequent the rivers of Canada and the USA: rafts, jet-boats, drift-boats, and even Sea-doos.  Whilst motorboats are convenient, rivers with powerboat bans and low river levels encourage many anglers to look at the lightweight options of an inflatable raft.

I am often asked if there is a raft that I prefer to use on the west-coast’s rugged rivers.  The short answer is, “yes.” I have been using a Watermaster for almost fifteen years because I genuinely believe they’re the best rig in the game.

When choosing a raft, there’s more to look at than just the price tag.  Safety and portability should be the primary consideration when making a purchase, but there are also other factors to think about.  Storage, capacity, weight, and whitewater rating should all be part of the decision making process.  Everyone has different needs, so try to pinpoint exactly what yours are before deciding to commit.  Some anglers are looking to stow their gear within the chambers of the pontoons (which is not something the Watermaster can do), whereas others prefer room for their dog and a cooler. 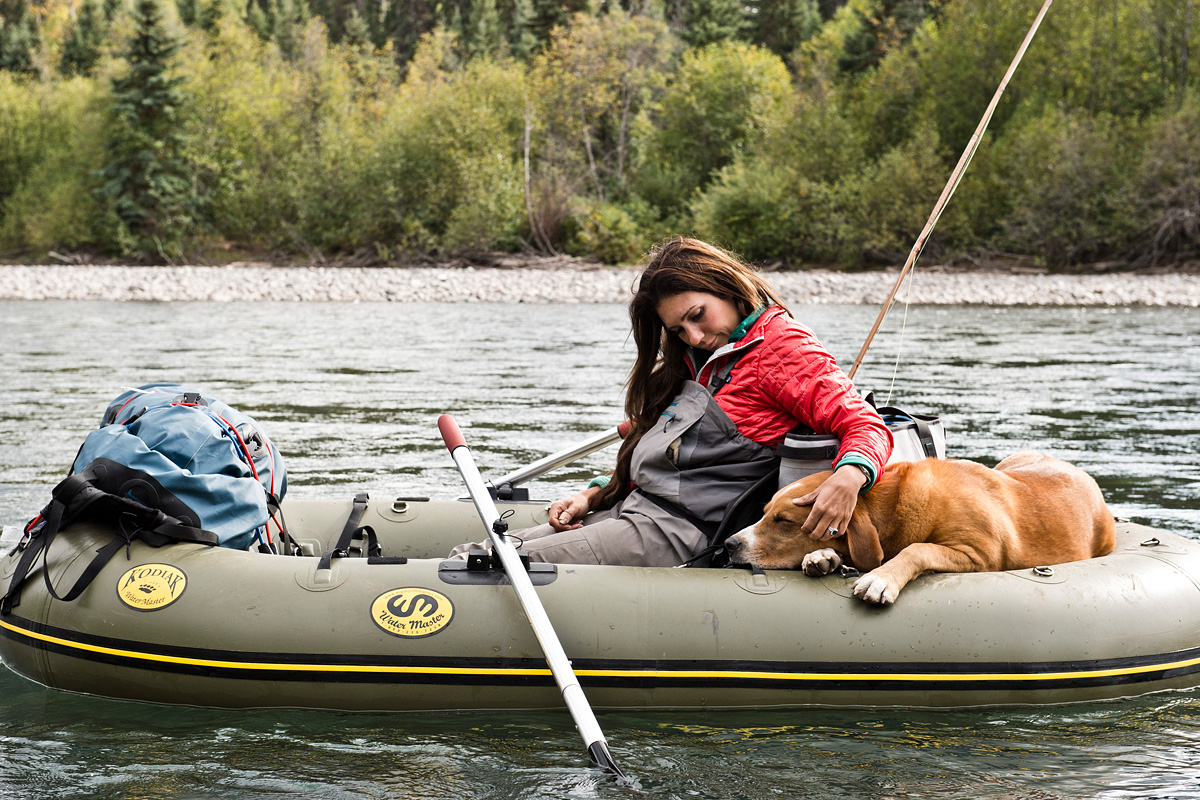 Here are five major reasons why I choose the Watermaster over most other inflatables:

1). It sticks to the water.  The oval shape of the Watermaster suctions to the water, making it truly difficult to flip.  The downside to this is that the extra surface-area can cause drag while trying to cross the river in a hurry.  Whether in a pontoon or Watermaster, be sure to point the bow of the boat directly at whatever obstacle you’re trying to avoid hitting, and then row like hell away from it.

2). Lightweight and portable.  Weighing less than 50 pounds, Watermasters can be checked in as luggage with most airlines.  They come in waterproof backpacks and are ideal for anglers looking to trek into remote locations.  Plus, when inflated, they’re light enough to portage around dry riverbeds or heavy rapids. 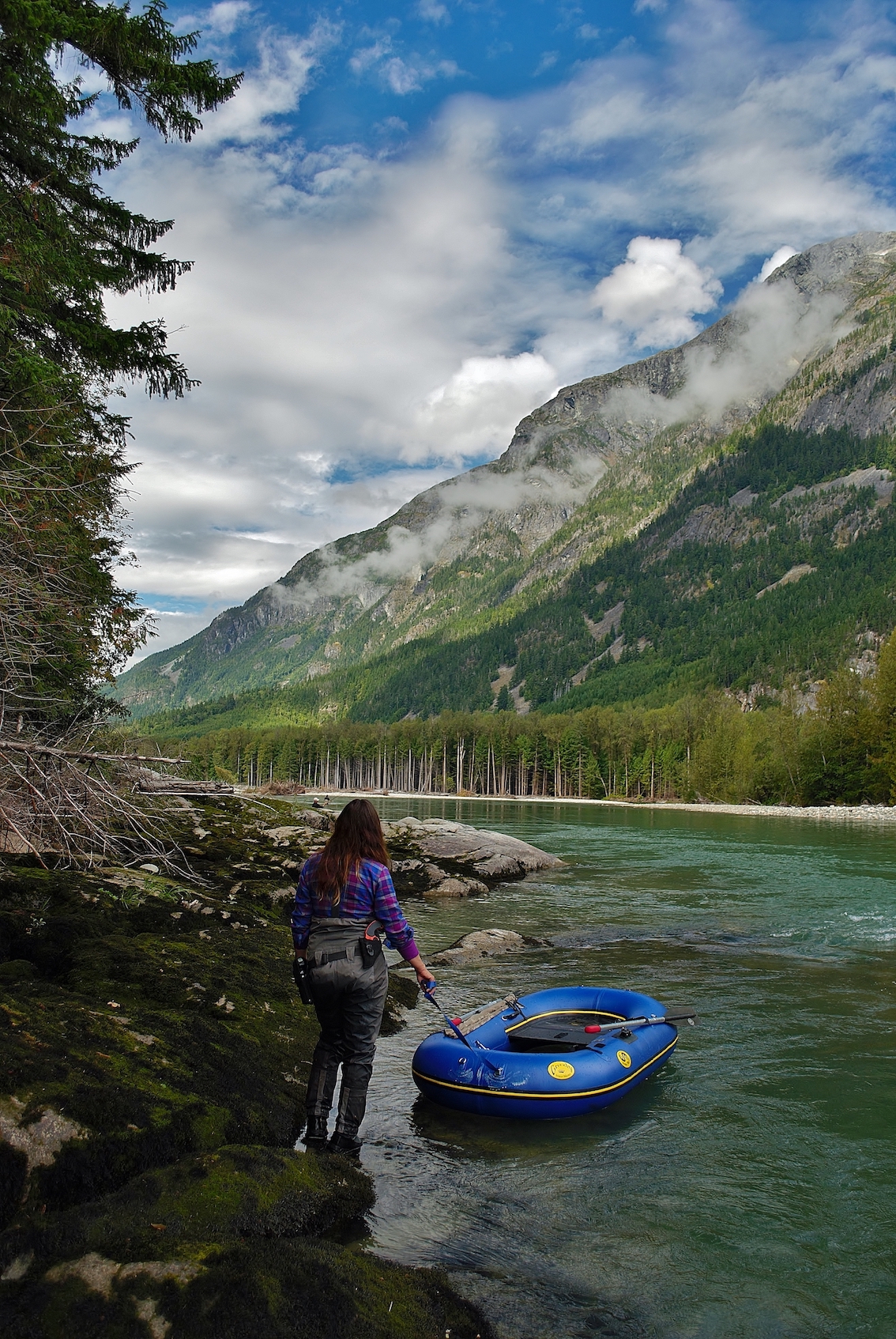 3). Blow-up walker.  This is probably my favourite feature.  Whether you’re unsteady on your feet and looking for extra support, or adventurous and looking to stand atop every protruding boulder you float by, the Watermaster acts as an over-sized flotation device and provides a level of comfort that a pontoon boat can’t.  They also remove the tedious task of walking back upstream to collect your raft once you’ve fished down through a tailout.  In 2008, I was involved in a bad car accident that left me with a broken foot.  With my Watermaster, I was able to fish the entire steelhead season by simply resting my broken foot on the boat’s seat…  When it came time to step downstream and cast, I just lifted my other foot off the ground and drifted several steps down.  There are many ways to get creative on the water!

4).  A dog’s world.  My dog, Colby, is almost 120 pounds and he is a champion on the back of my Watermaster.  I’ve used the raft to carry Colby, various coolers, fishing buddy’s, and week-long pack trips worth of gear.  The boats are made from PVC with a polyester weave and injected UV blocker, giving them extreme durability.  I use mine regularly and am still using the same one I bought almost fifteen years ago!  I have one patch hole, but it’s from dragging it over a piece of sharp metal that was lodged on the riverbank. 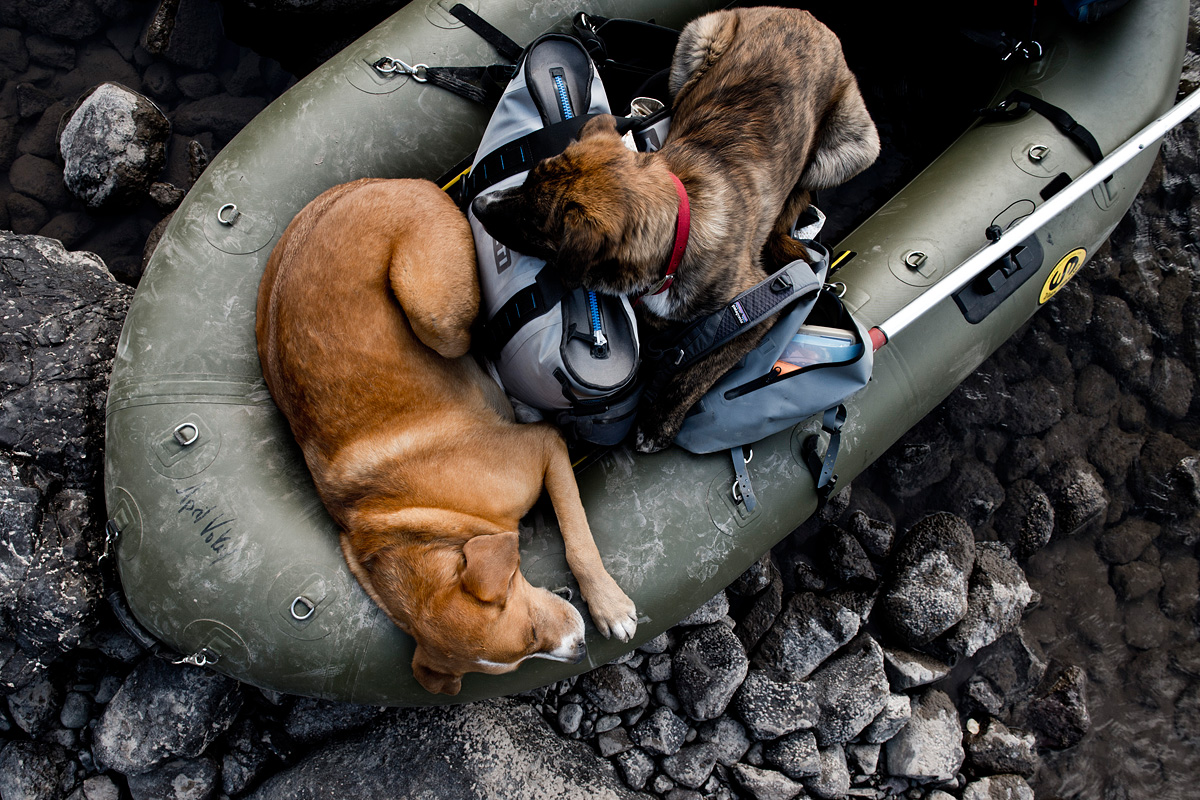 5). The closed bow. This  helps the Watermaster to bounce off rocks rather than accidentally wedge rocks between pontoons.  The closed ends provide extra flotation, making the boat even more buoyant.

Though the advantages far outweigh the disadvantages, there are a few things to keep in mind with these boats.  The Watermaster’s low profile makes it easy to row too deep and bust an oar, or worse, flip a boat.  I strongly advise upgrading the stock standard oars to the heavy-duty set, and to always pack an extra (like we didn’t do here). 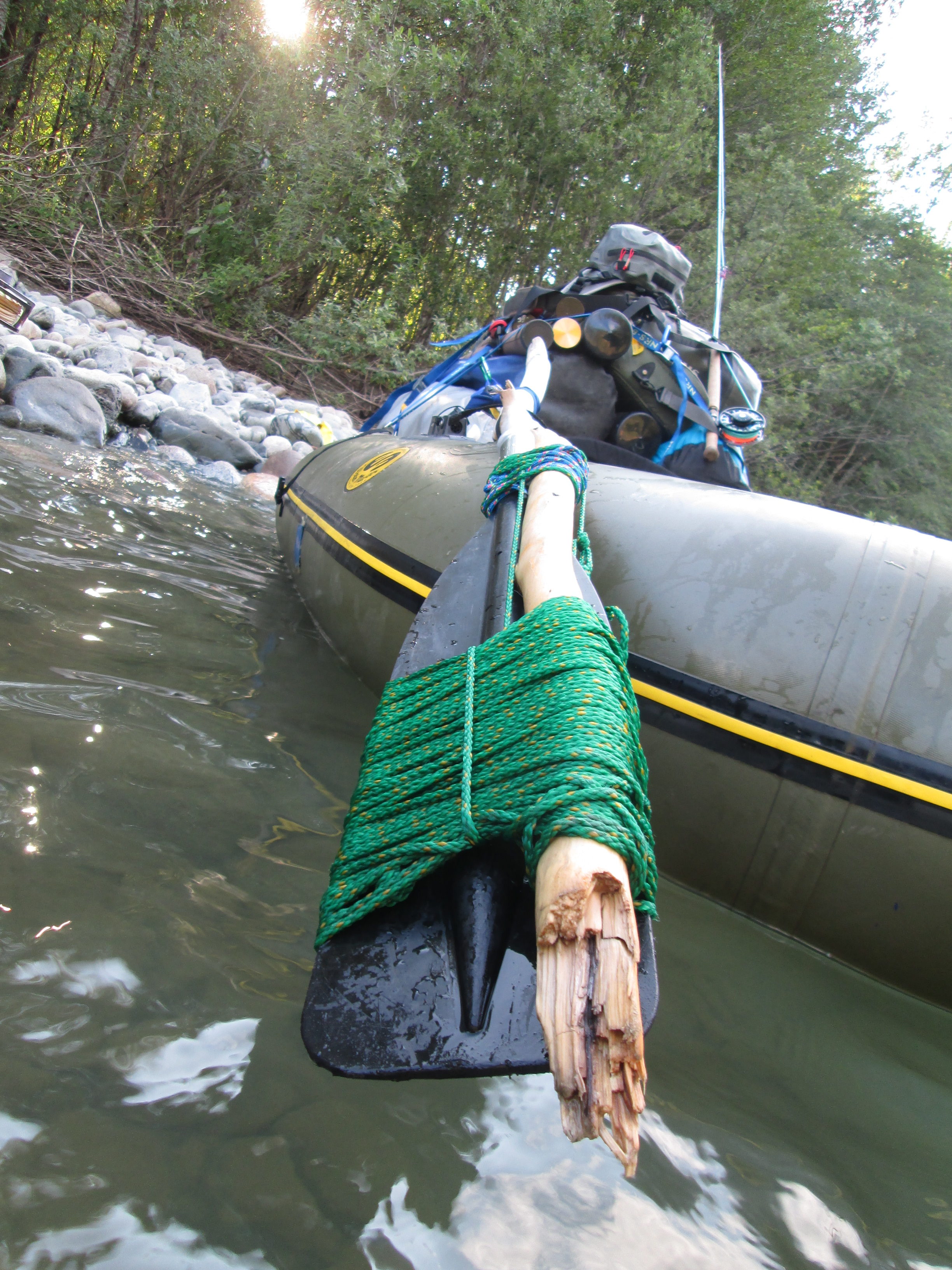 Please also remember that these boats are best for moderate rivers (they’re rated to class lV), and that even the bigger of the two Watermaster models is still under nine feet long.  I once thought my Kodiak was something it wasn’t and I ran a rapid twice the size of my boat.  It ate me up and spat me out upside down and sopping wet.  I was able to pull my inflatable PFD cord and make it to the surface, but was quickly scolded by experienced white-water rafters who reminded me that a more beefy lifejacket is a must.  Apparently only 30% of people who flip actually remember — or have the capacity — to pull the rip cord when underwater.

So with safety first, row safe and have fun!

Fly Fishing for Billfish: The King of the Ocean

I steadfastly refused to troll for gamefish. An avid steelheader, the idea of casually lounging in a gas-guzzling mini-yacht, trusting deckhands to help me catch fish, all while sitting in a chair that I suspect my dentist designed… I was beyond disinterested. In my mind, bill-fishing was for one of two sorts of people:  the fat, rich kind who need their egos stroked, and International Game Fish Association, (IGFA) record-chasers desperate to...

What I’ve Learned Fly Fishing with a Baby

When it comes to fishing with a baby, it can be hard to plan accordingly.  Planning (as all of us parents laugh aloud) may not always be successful, but it certainly doesn’t hurt to try.  With kids, every day is different from the last, every child is different from the next, and Mother Nature can be as unpredictable as a hungry, over-tired toddler clutching a bowl of spaghetti. As parents, we try our hardest to be organized and prepared, but...

If you’ve ever seen old photos of me on the internet, it’s easy to be distracted by the bad hair and chubby cheeks affixed to the shit-eating grin of an excited young fisher-girl. But if you look closely at the photos, you’ll see something that’s not laughable. Big fish caught in various water conditions — each with a pink and blue fly in its mouth.  The Sugar Pop.  I started tying the Sugar Pop when I was twenty years old and it has remained my...