How To Kill Your Buck In The Off-Season (Scout, Plan and Prep)

Most of my deer hunting related work occurs long before my first hunt of the year. I am not talking about food plots or trimming out stand sites – neither of which are even legal on most public lands I hunt. Instead, the focus is on understanding the deer and the land on which they live.

Here’s a look at what I mean by that, and how exactly I use this off-season work to kill mature bucks on public land.

The process started a year ago. It’s important to be safe and considerate of other hunters still in the woods, but that doesn’t mean you need to hang up your boots. There is no better time to see what bucks and other hunters are doing. If you didn’t do this last year, then just keep it in mind for this fall!

I gather a lot of information from last year’s trail cameras as well. Cameras get deployed for long periods of time at key locations such as entrances into bedding and rut travel routes to gain a detailed understanding of those areas. Use of these areas is usually similar each year. 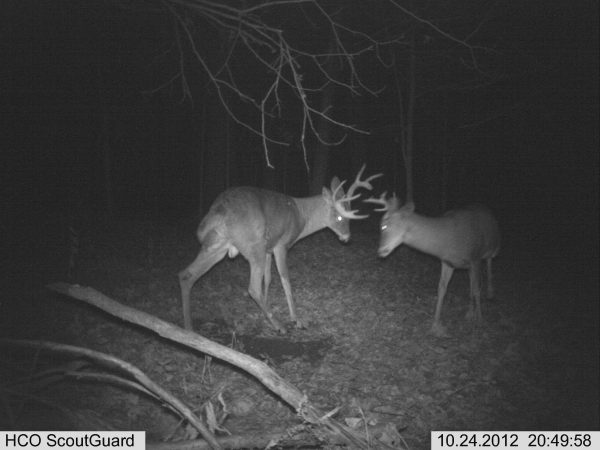 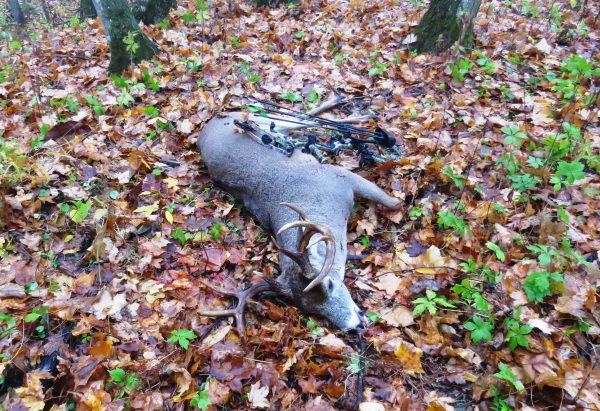 It was fitting that two years to the day after getting this extremely nomadic public land mature buck on camera for the very first time working a scrape and aggressively sparring with a younger deer I killed him while he again tore up a scrape near his bed.

In the winter I keep trail cameras out and do some observation sits of food sources in the area. All you really need is one confirmed post-season observation or shed antler and odds are a buck will be back in the usual spots next fall. 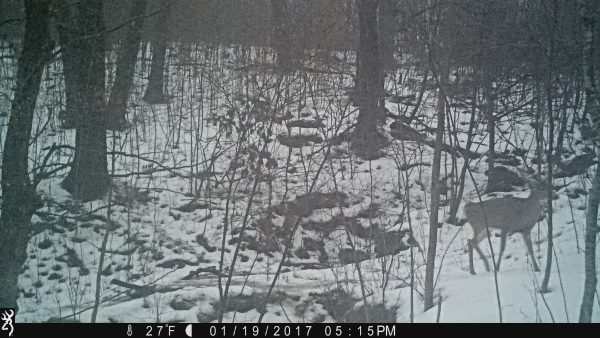 This isn’t the clearest trail camera photo but I am familiar with this great up and coming public land buck and now know that he made it through last season. I am also dialed into his small core area from last fall’s observations.

Every chance I get after a fresh snow I will find some deer tracks to follow. When doing this, take your time and ask questions. See how bucks move using cover, wind, and terrain to their advantage. The knowledge of how a buck moves through an area is priceless. 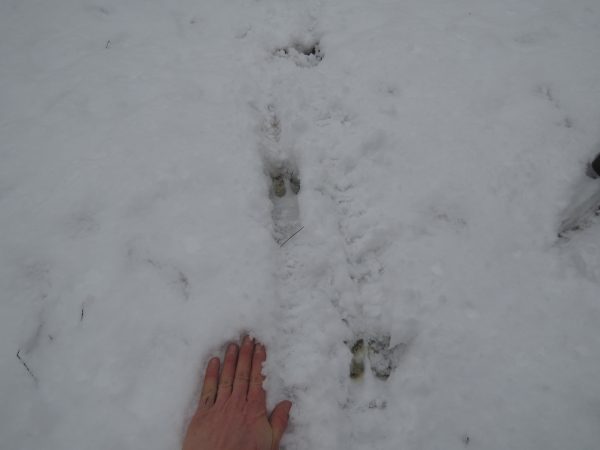 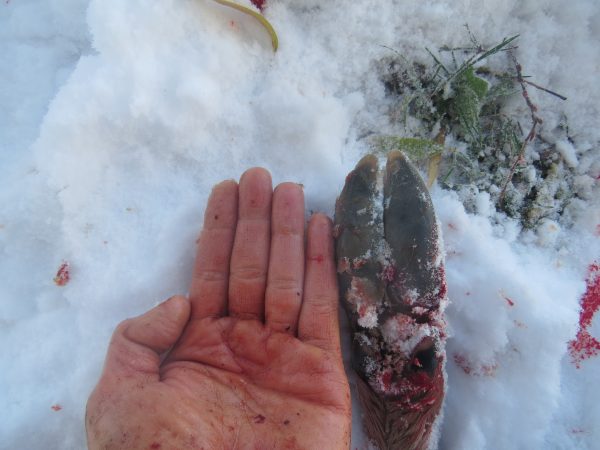 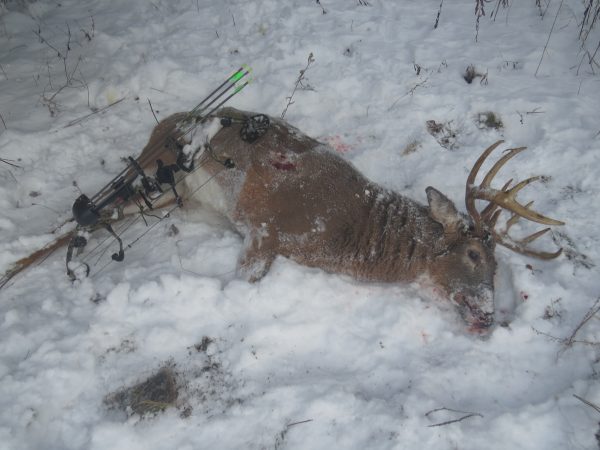 A heavy set of dragging buck tracks I found in February a few years ago entered a public land bedding area. Eight months later I killed what I am pretty sure was the same buck within 40 yards of where I photographed the tracks.

Winter snow days are also great for sitting back and reviewing what I know about certain areas, bucks, and stand sites. Spikes in rut activity involving certain doe groups are often consistent. Many things change including weather conditions, food sources, and human disturbance, but I start with annual patterns and then look at these other variables.

This is an example of weather data on one of my trail camera sets. Information from hunting/scouting notes and trail cameras gives me a lot of trends that I hunt by.

Another thing to do on a snow day is check over gear and fix anything that isn’t working. I have learned that for hunting, less is more, but what I do use must work or it’s not worth having.

Spring is still a good time to scout. Fall and winter deer sign is glaringly obvious. Just be aware sometimes it is tough to tell exactly when sign was put down over the last few months.

I like to explore new hunting areas with the great visibility of early spring. New areas and setups are crucial to success to those of us who share land. We deal with disturbance by hunters, hikers, horseback riders, bird watchers, ATVs, farm operations and even other predators like coyotes, bears, or wolves. We must be versatile to succeed.

For new areas I break down deer travel routes by pinpointing buck and doe bedding, food sources, and rut sign. Remember, target what you want to kill.

Don’t be fooled into targeting the heaviest trails, usually just made by doe groups, unless that is what you are hunting. I look for big buck sign and those subtle cover and terrain bottlenecks that all the cyber scouters out there cannot see. Just as important to note is sign left by other hunters including old stands or just climber marks on trees, cut branches, and discarded scent wicks and other litter. 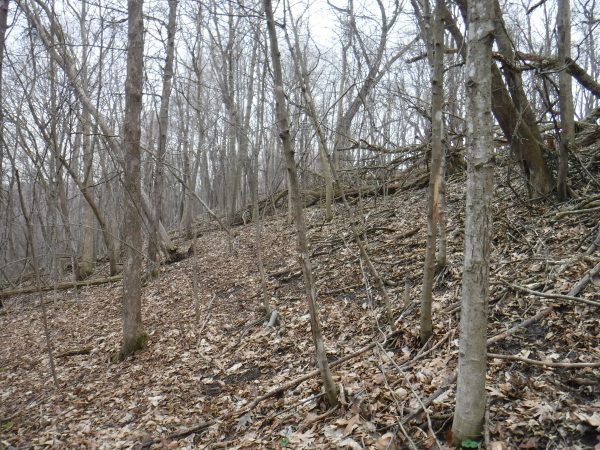 A couple tall rubs from subsequent years mark a faint trail to a big buck bed I found this spring on a new piece of public land. The sign left by big bucks leading into their bedrooms is often very subtle.

I usually walk 100 miles scouting outside of deer season and would do more if I had time. For me cyber scouting is only a good start to an area. 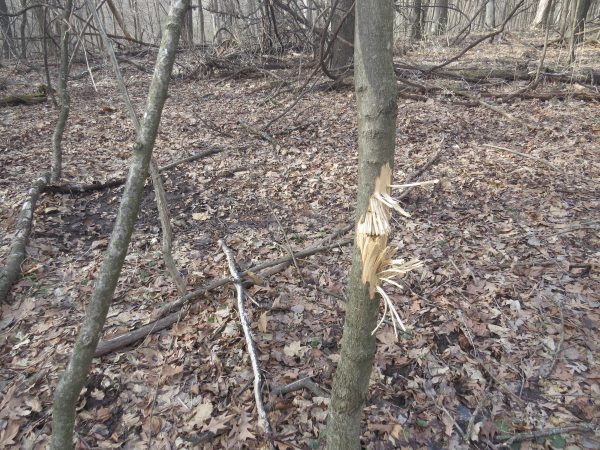 Each year many rounds are unloaded during gun deer season on the public lands I hunt and the results are obvious.

In familiar areas scouting is usually a review of last year’s sign and checking or adjusting potential setup locations, some of which don’t get hunted for years until something I want to kill shows up.

I mark potential setups with a note for preferred wind, weather and time of year to hunt and walk every access route if its new to me.

This is the benefit of being completely mobile. I try to high grade my setups for different expected conditions. That means finding two or three times as many quality setups as can be hunted in a season. Public land throws curve balls every season. You can sit around and complain or prepare for it and have a fighting chance.

Take notes, mark up maps, or log waypoints in your GPS or smartphone. This pays off in the future. Anytime you are scouting, if you come across a big track take note of it and what the tracks indicate he is doing. 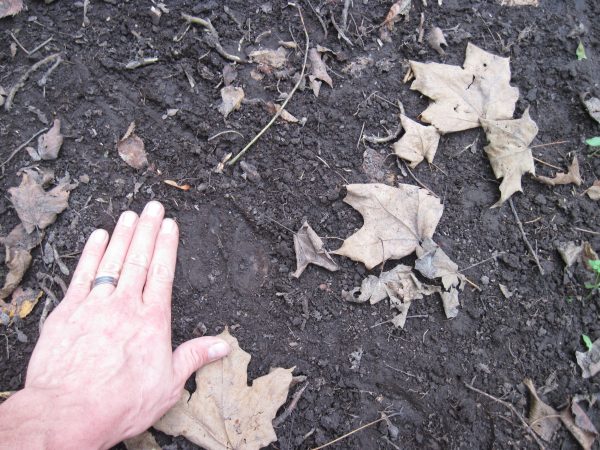 This big heart shaped track is from an equally big buck I will be after next fall.

Last but not least, as spring returns remember to get the bow out and begin to practice.

In the summer I continue to scout, but lower impact, mainly sticking to field edges looking for tracks, checking on food sources including the upcoming acorn crop, and putting cameras near major food sources in the area for inventory.

Long ago I learned it is usually a waste of time to pattern bucks in the summer (unless your state has a season opener before summer patterns end). Now I just want to know who is around and I will use my scouting and past fall’s observations to hunt him.

Detailed scouting with summer foliage can be challenging but I know some good hunters who do most of their scouting in the summer months because that is when they have time to do it. Don’t use summer foliage and the ticks and mosquitoes as an excuse to leave questions unanswered.

In the weeks leading up to the season review the information you have to date. Prioritize what properties and bucks you will focus on through the season but stay flexible and always have a Plan B and C.

The day before the season should bring confidence. I want to have an understanding of the lands I hunt and the bucks that are around. I should know food sources and when they become preferred. I should have in mind when and where rutting activity has occurred historically and a laser focus on where the best buck bedding is through the fall. I know what seasonal hunting pressure looks like but am ready to adapt as necessary. If you don’t feel this confidence just remember you can start preparing for next year right now. 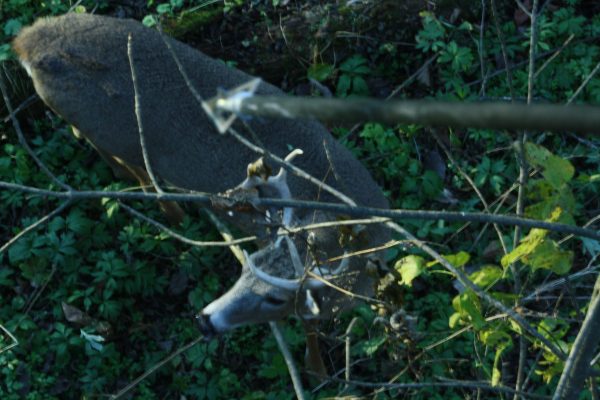 This is not a new season, just an extension of years’ past. For me spreading out the work builds success but also keeps it fun and the passion burning bright. It’s only a few hours a week, year round. Everyone wants to fill their tag. The question is: what are you going to do to ensure it?

How to In-Season Scout During the Rut

While filming our second season of One Week in November earlier this month, I faced a dilemma. Where I thought the Wisconsin bucks would be cruising was a dead zone. By November 6th, that much was clear. It was also clear that I needed to take advantage of my last day of hunting, so I went looking. What I eventually found clued me into current buck movement. Even at the point in the season when that movement should have been random—it wasn’t. It...

Scout in March to Kill in November

November deer hunting success is not entirely unlike giving birth to a child (don’t tell my wife about this analogy). If you know what you’re doing, get a little lucky, and put in your work nine months ahead of time, you’re in for a life-long memory. The most important work predating November success is early spring scouting. It’s during this brief window between snowmelt and green-up that you can see the secrets of last year’s rut laid out like...

How to Scout Public Land Whitetails in the Offseason

In a classic bait-and-switch move, I’m going to tell you something anticlimactic: You should start winter scouting public land just like you would any deer ground. Walk it, make notes, check out the past season’s sign, and try to read the terrain so that you’ll be better prepared next fall. This is all simple stuff and worthwhile for the public land hunter. But there’s more to the story if you want to use your February findings to stay on top of...