Today we have a guest post from Jeff Gienke, of TheHuntingBeast.com, who shares with us the story of his 2017 Minnesota buck. What makes this post especially interesting, in my opinion, is the detailed diagram that Jeff includes – which shows stand sites, kill locations, bedding areas, typical buck cruising routes and wind direction impacts. You could learn a whole lot just by looking at this map, and I’d encourage you to really study it. But by adding in Jeff’s 2017 story and analysis, you can ramp up the learning opportunity even more. Don’t miss this one. – MK

Hard work pays off, right? I like to believe so. Pay your dues, put your time in and you should be graced with an opportunity. Most importantly, learn from your mistakes.

Not ideal conditions for a rut hunt in hill country. But I have a killer rut set-up that produces very regularly for nice bucks. Last year I took a nice 10 point and my son took his first deer, a five point. Both happened the same day, out of the same tree. It was a typical “thermal tunnel” cruising pattern. 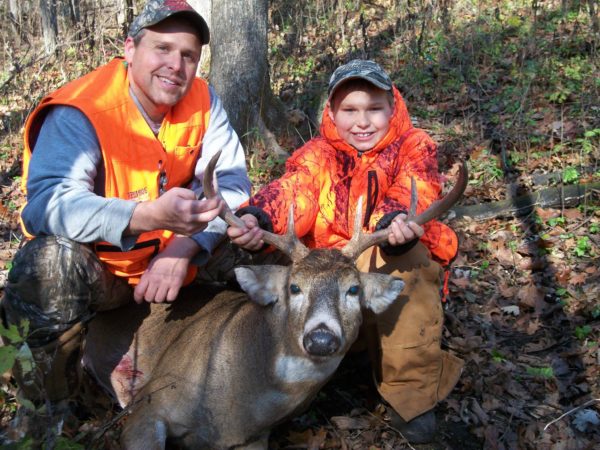 So what’s a thermal tunnel?

A thermal tunnel is an effect that happens when winds blow over an elevated object (such as a hill, ridge, or small land rise) and meet the rising thermals from the valley, or lower ground. Thermals occur when the sun rises and sets. Thermals are the cooling and heating of the earth. In our hill country example, as the sun rises, sunshine hits the forest floor. The forest floor begins to warm. The warmth causes the air to rise. The rising air currents flow up the hillside and meet the wind which is blowing over the top of the hill. This clash creates a thermal tunnel. The two currents roll and swirl together. Sometimes if conditions are right you can watch leaves move on the ground in a swirling pattern. The tunnel usually sets up 1/3 of the way down the hill. Bucks like to cruise the thermal tunnel. It allows them to smell above and below at the same time.

Does the thermal tunnel always set up on the 1/3 elevation? No, the thermal tunnel height varies. Many factors dictate location: wind speed, the slope of the hill, morning or evening. When scouting, start at the top 1/3 elevation. The cruising trail will adjust higher or lower based on terrain, wind speed and temperature. When hunting thermal tunnels I place my stand as high as possible (five or six sticks high) and above the thermal tunnel on the hillside. I want the prevailing winds to suck my scent up and carry it over the valley, giving me a scent and visual advantage.

When scouting areas I look for leeward hillsides (the hillside where the wind blows over and thermals interact) with bedding areas on the leeward side or bedding areas across on the wind blown side. My observations have led me to believe that does do not always take the wind into account when selecting bedding. Does are social animals, they bed in groups and watch out for eachother. Mature bucks are loners. In this hill country example, does regularly bed on top of the nobs. Bucks bed on the points of the nob, when wind conditions are appropriate. See the diagram below. 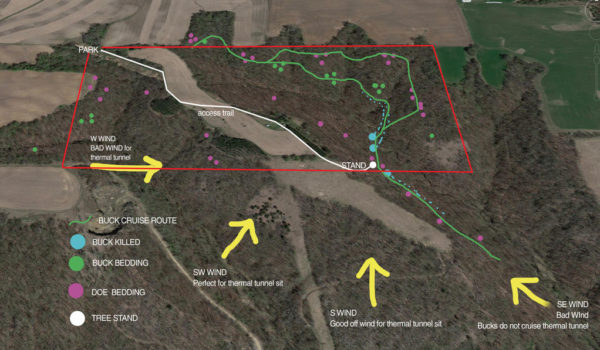 What makes my rut stand so successful is that the cruising bucks know the does are on top of the nobs. Bucks cross from the thermal tunnel to access and scent check the bedding. Once they make the loop, they re-enter the thermal tunnel. Most of the bucks I kill from this stand are in the morning.

Back to the hunt

This year the predicted NW wind was wrong for the rut stand.

Usually when I successfully hunt this stand it is with a S or SW wind. S or SW wind sets up the thermal tunnel causing bucks to scent check bedding on the windblown hillside. After they are done, they cross to the leeward side.

I refer to the area they cross as an invisible funnel. There is not a physical terrain feature causing the bucks to cross the ditch below my stand. Thermals are needed to get the thermal tunnel to push the bucks across.

This spot has produced many big bucks for me. 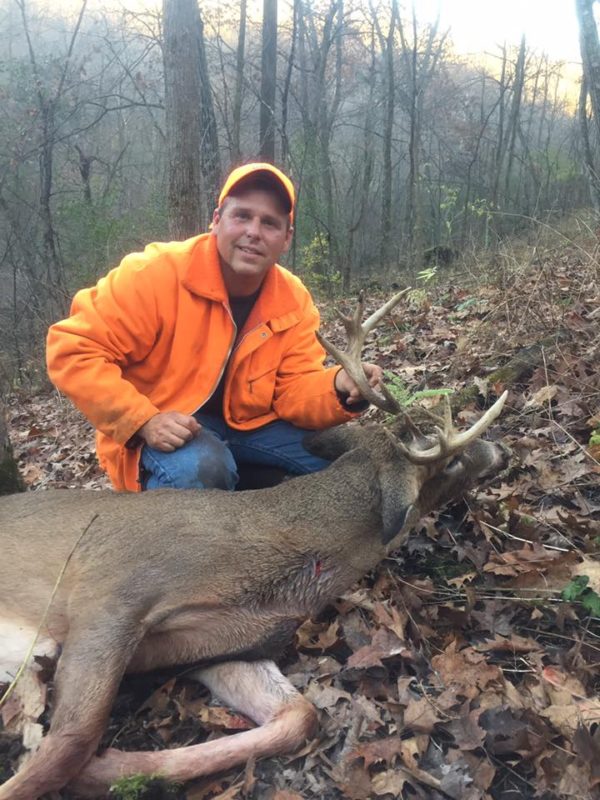 With the wrong wind, I decided to sit there. And yup, it was a boring uneventful day for my son and I. Past success convinced me to sit the stand, current conditions told me otherwise.

Just before the end of shooting light, the winds calmed, rain let up. Movement above me caught my attention.

A really nice eight point snuck in, 30 yards away. He was at eye level due to the incline of the hillside. I kept saying to myself “turn away and walk where you came from, my son might see you and get a shot”

The buck did not follow the script. So there he was, standing at eye level, sucking up acorns without a care in the world.

I made a second mistake

My first mistake was hunting with the wrong wind. My son and I both had licenses. But we decided to only use one gun, his youth 20 gauge shotgun. The gun hung between the two of us, my second mistake. The buck had me pinned.

He moved behind a tree, I somehow managed to stretch and get a hold of the gun. My son had no idea what was about to take place.

The buck was onto me, I mouth grunted, hopefully my son then knew something was about to happen.

Blouch, off runs the buck.

I hung the gun back up, pride hurt. Mr. Buck, you won today.

Southwest wind! Today is the day. Overnight an inch of snow fell. The hillsides were blanketed. The hillside was covered with tracks as I approached my tree. Brimming with confidence, I hung my stand.

Not long after, a lone doe crossed from the windblown nob. She slowly worked her way down the hill, crossed the invisible funnel, eased into the thermal tunnel and started working her way across the hillside toward me. Stopping frequently to eat buckthorn and acorns. I raised the gun, contemplating to take her and fill the freezer.

Her shoulder visible, I clicked the safety off and took aim. I lowered the gun and decided to pass. It’s the rut, let her go, a buck might be right around the corner.

An hour passed, the doe was long gone.

A large bodied deer worked its way across the windblown hillside. It took the same path as the doe. I could now tell it had a nice rack. He stayed just out of range. As he walked away, I grunted to see if I could get his attention. He lifted his head and looked in my direction. I watched him continue to follow the exact path the doe walked and disappear.

45 minutes passed, out of nowhere the buck that disappeared came back trotting, head up and curious.

In SE MN a buck needs four point on one side to be legal. A quick count of five, game on!

He quickly dashed towards the ravine and disappeared behind a wall of buckthorn. Wow, did I hit him? It happened so fast.

I waited in the stand to give the buck time. I reflected on what took place the last two weekends. I made mistakes. I was not prepared for an encounter. Always be ready for the opportunity, I reminded myself. Hunt the correct wind and not past success stories. 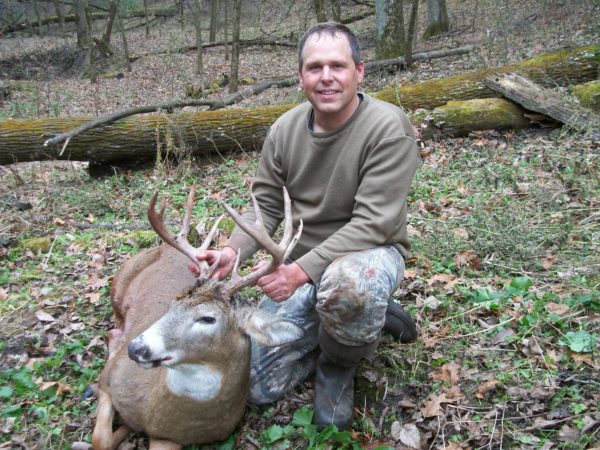 I took up the blood trail, I watched a doe on the hillside. There laid my perfect 10 point buck.

Next time you see that doe, let her go, that big buck might be just around the corner.

Join us at The Hunting Beast forum for more hill country tactics and success stories.

The No BS Approach To Getting Permission On New Hunting Properties

By Dan Johnson For me April means two things – turkey hunting and finding new property to hunt. If you’re like me, you don’t own your own property, you can’t afford to lease property and you weren’t blessed by being born into a family that owns a large amount of hunting ground. Looks like your only other options are outfitters and public land. But the fact is, if you want to avoid the rigors of public land hunting, there is plenty of private...

Ask MeatEater: How High Do You Hang Tree Stands?

You’ve got questions. We’ve got answers (and if we don’t, we’ll make them up). Every day, fellow MeatEaters send us more than 100 emails regarding hunting, fishing, cooking, conservation, and more. So, we decided to publish a series dedicated to our favorite FAQs. This is Ask MeatEater. There is no one-size-fits-all answer to how high you should hang your tree stands. But by considering three factors, you can get to an answer that’s right for...

Ask Wired To Hunt: Are the Premier Whitetail States Overrated?

Most whitetail enthusiasts’ bucket list hunts orbit around three Midwestern states. Decades of magazine covers, TV show features and record book entries have trained the general hunting public to believe whitetail dreams only come true in Iowa, Illinois and Kansas. In the past decade, I’ve been fortunate to hunt several of these states, as well as numerous others. While I’ve had success hunting the premier destinations, I’ve had just as much...