Bucks are beginning to shed velvet across much of North America so it seems like a good time to discuss one of the most recognizable signs left by the elusive whitetail.

Several decades ago, hunting for a buck near a scrape was very popular, sort of like food plot hunting is these days. Growing up I read many articles about scrape hunting tactics in outdoor magazines. In more recent years, telemetry studies have shown most scraping activity occurs at night. Current conventional wisdom has shifted to the belief that hunting a scrape is low odds for a mature whitetail buck.

However, I think there is more to scrapes than meets the eye.

Most hunters know scrapes are typically located near destinations such as bedding or food or intersecting travel routes. On top of that, scrapes can be created somewhat randomly by rut crazed bucks. Deer are most active after sundown so naturally most sign occurs at night. Location is everything, and I will go into more detail on that in a few paragraphs.

The type and frequency of scrapes you see in the woods depends a lot on deer densities and age structure of bucks in the herd. Low densities and few older bucks result in less sign including scrapes. But there still might be a great buck using that scrape you just found.

The striking difference between a 30-inch wide “big” primary scrape in northern Wisconsin (left) and a six-foot wide one in Iowa farm country (right) represent the differences in habitat, deer densities and age class of bucks.

Although I will describe some general types of scrapes in this article, do not get hung up on names or labels. Study patterns where you hunt and apply that to your tactics.

It is usually easy to identify primary/community scrapes from the large number of more lightly used scrapes that pop up every rut. Primary scrapes may appear perennially and are often used by many different bucks. Broken and worn licking branches can be spotted while scouting at other times of the year, even in the summer when ground vegetation covers any sign of the scrape.

Back to location. A small proportion of scrapes see a lot of daylight activity. These are typically in secure areas in close proximity to buck bedding. Just how many scrapes fall into this category depends on factors including deer herd structure and hunting pressure.

Scrapes near bedding are a major component of my bow hunting strategy. You cannot disturb them with pre-hunting prep or trail camera checks any more than you can disturb the bedded buck that is likely nearby. I look at a primary scrape in security cover near bedding as a virtual bottleneck that every buck will pass by on their way to and from their bed. The scrape becomes a focal point to target the adjacent bedding location. It is often my kill site. 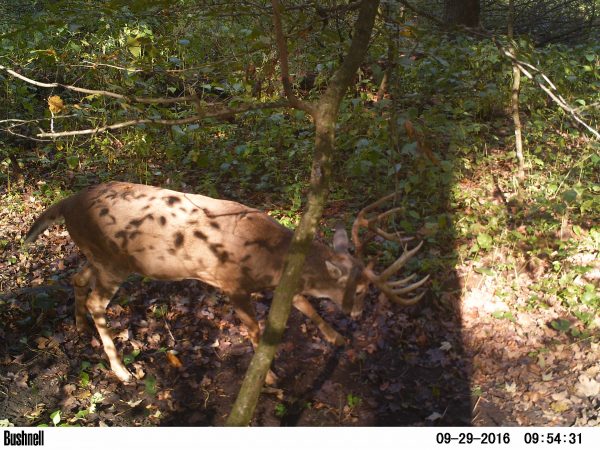 This fully mature buck worked a scrape mid-morning within his public land bedding area on the first high pressure day after a cold front in late September. Putting a camera on a scrape within a bedding area and leaving it the entire fall is a great way to better understand the location. This buck felt comfortable working this scrape because it is extremely secure and hard to approach undetected. Believe me, I want to!

How does a hunter use this situation to their advantage? The oldest bucks tend to approach a scrape from downwind and may only scent check it from a distance. The right set up is situational, depending on good access and a knowledge of how bucks move in and out of that area. My decision to attempt a morning or evening hunt is usually dictated by which time period will allow me to get in clean. The difference between success and failure is usually measured in a few degrees of wind or yards of distance. You learn by screwing up a few times.

There is one type of scraping behavior that I find fascinating. In hilly terrain some of the largest and most heavily used primary scrapes show up in low areas where valleys or draws join together. These scrapes can see a lot of use peaking in the days leading up to the cruising phase of the rut.

A few years ago I heard these locations described as thermal hubs. The hub is created when falling thermals pool in a central low area early and late in the day. A buck can pass through the thermal hub and scent check a large area for other deer, most importantly does nearing estrus. Often they bed in or near the hub. This is classic pre-rut seeking behavior in hill country. I first learned about this behavior in the collegiate level deer hunting academy that is Dan Infalt’s Hunting Beast forum and have not heard it discussed anywhere else. 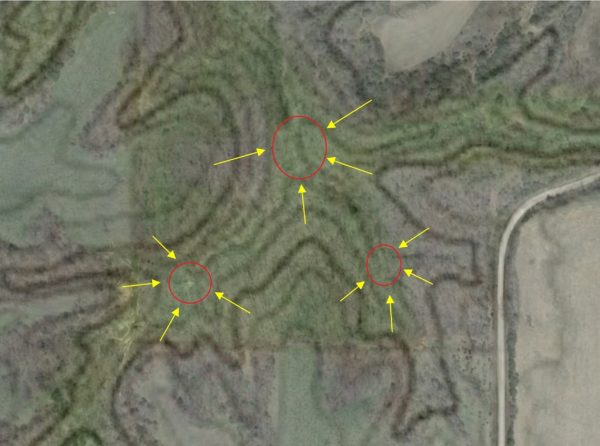 In this random location from Google Earth the red circles indicate where low thermal hubs would occur with yellow arrows representing falling thermals in the evening and night.

Thermal hub locations often contain massive perennial scrapes and signpost rubs. The more doe bedding on the surrounding ridges the better. Low thermal hubs are challenging to hunt due to the swirling air currents and the likely proximity to bedded bucks. More often I use thermal hub scrapes for trail camera inventory sites and target the nearby bedding of rutting bucks using the thermal hub scrape as a likely direction of travel. 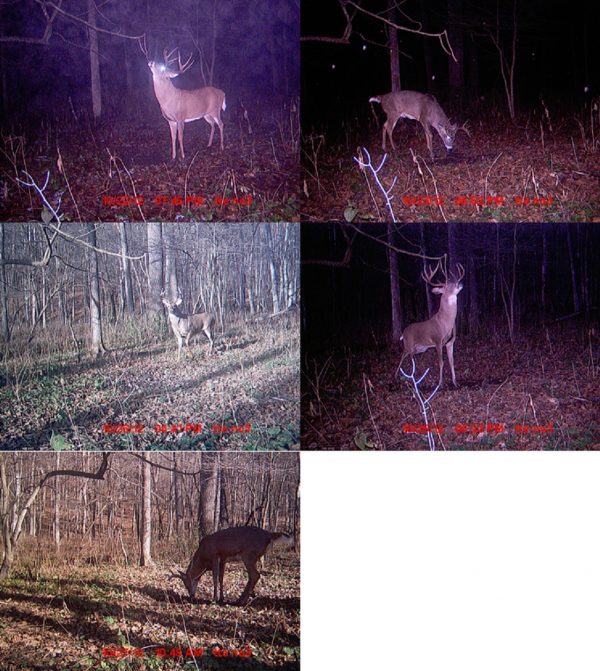 I have noticed similar activity, including perennial primary scrapes, on the spine of ridge systems where multiple secondary ridges join together. Rising thermals converge on these locations from multiple directions. This location could be called a high thermal hub.

These high hubs see strong rising air currents on calm, sunny, high pressure days that can draw the scent stream of a tree stand hunter right up through the tree tops. In other words, a high thermal hub in the right spot can be a lethal cruising setup during the rut.

Another unique behavior that I have observed is scrape bedding. Some primary scrapes have bucks bed in them repeatedly through the fall. Scrape bedding seems to occur most often in the evening or at night and in areas with decent age structure and buck to doe ratios in the herd. In other words, where the rut is most competitive. I have noticed after a younger buck beds in a scrape a more mature buck usually shows up shortly thereafter and tears up the scrape. 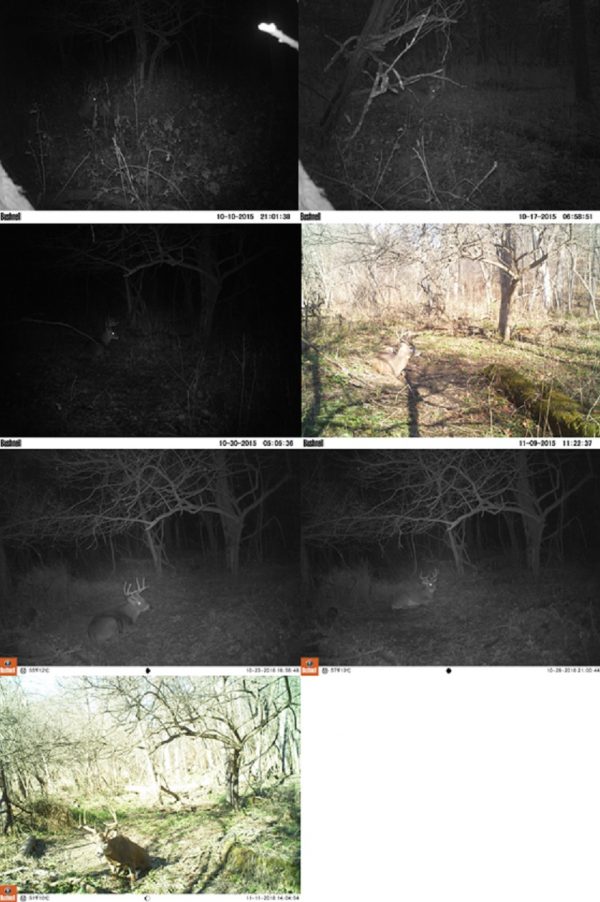 This series of pictures was taken over two consecutive years at the same perennial scrape located in a public land thermal hub. You can see the same symmetrical 8 pointer bedded in the scrape both years.

Any scrape that sees this bedding behavior tends to be in security cover. Many, but not all, of the scrape bedding occurs in thermal hubs. Beyond that I have a lot questions still to answer about bucks bedding in scrapes.

A different interesting scrape behavior is that of does using scrapes as breeding stations. Does that are near estrus sometimes wait near scrapes for a buck to show up. It seems this is most common in areas of low deer densities but I have seen it in other areas as well.

Although does frequently use licking branches at other times of the year it seems like they avoid scrapes near peak rut unless they are nearing estrus. In this example a doe visits a scrape under my trail camera (left) on the morning of November 7th and it’s not a coincidence that two big bucks are on camera later that morning.

As you can see, scrapes can have many meanings and many uses. Hopefully this gives you some ideas about scrapes in the areas you hunt. As always, good luck!

Scrape signposts are often mentioned in hunting literature and on entertainment television. While some hunters consider them paramount, others dismiss them as secondary locations. Over half of the bucks I’ve arrowed were taken from active scrape areas, so I consider them major focal points of buck activity throughout all phases of the rut. Unfortunately, the trouble many hunters have with scrape hunting is self-inflicted. Scrape hunting failure...

How to Use Mock Scrapes in Summer

The summer months are filled with anticipation and a curiosity to see which bucks survived the winter and how they will grow this year. Mineral sites and other food sources are effective ways to attract bucks to your area and to get pictures of them on your trail camera, but they’re illegal on a lot of public land areas and even on private property in some states. In big woods and large timber tracts, food sources are abundant during summer...

The Value of Looking At Your Hunting Property With Fresh Eyes

A rut. It’s a good thing when referring to a time of year. It’s a bad thing when referring to something thing you fall into. Unfortunately, for a lot of us, if you hunt the same property multiple years in a row, that’s exactly what happens. When arriving on a new property most of us do some scouting, hang a few tree stands and then do some tweaking based off what we learn. But eventually, maybe a year or two down the road, we settle into our ways...