Manipulating Habitat In The Hunt For A Single Specific Buck

This season in Michigan, I’m after one single specific buck. If you’re a longtime follower of Wired To Hunt, this is not news to you.

And this idea of hunting one single buck, it’s not too unique these days. We see and hear often about these epic multi-year hunts for “Mr. Big.” But those stories and the strategies shared mostly focus just on what’s done during the season to kill that buck; scouting from afar, studying trailcam photos, tweaking stands, diving in on the right day to kill him.

What I haven’t read or heard about as much is what kinds of things can be done specifically in the off-season, from a habitat standpoint, when hunting one special deer. This year, that’s exactly what I think needs to be done to improve my chances of tagging my own “Mr Big.”

Why Tweak Habitat For One Deer?

When chasing a single buck, especially one that has evaded you in past years, it’s my opinion that you need to shift every possible variable into your favor that you can – no matter how small. And in the off-season, habitat is one such variable that can be tweaked to your benefit. But rather than generic habitat improvements usually done to aid the overall herd or hunting on your property, when hunting a single buck, I believe you can use carefully planned habitat improvements or manipulations to put yourself in a better position for that specific deer.

As a case in point, below I’ve explained four habitat manipulations I’m planning this year (or have already completed) to help in my hunt for my special buck, why I think they can help, and how specifically I plan to implement them. Study my scenario below and pay attention to the logic and rationale behind my plan – then apply these concepts to your own property and your own dream deer.

The buck I’m after is a homebody – during the fall he stays in the general area of my hunting property for a large proportion of this time (I know this from consistent daylight observation and trailcam photos.) This is a good thing. The bad thing though is that most of that time is spent close to my property, but not quite close enough, as he beds most often in some high quality cover next door. He ventures over on occasion to feed or chase does, but not often enough.

With this being the case, if I can increase his daytime usage of my property by incentivizing him to bed more often on my side of the line, my opportunities at him could increase dramatically. To do this I’ve identified several current bedding areas on my property  – not too far from the areas he already beds on the neighbors – that are OK currently, but not great, and then strategically hinge-cut in and around them to improve the quality and scale of cover. By increasing the size of the high quality cover regions there’s a better chance that this buck will find an area to his liking and begin bedding there. But even if that doesn’t happen, if these bedding areas now can more consistently hold does during the fall, there’s a better chance he’ll cruise through to check them out during the rut.

I’ve also located my hinge cutting bedroom improvements strategically in areas that will allow me to access/hunt near them, if needed.

Speaking of increasing this buck’s daylight activity on my property, another tact I’m going to employ with this goal in mind is to shift, very slightly, the location of one of my main food plots. This food plot is one of two primary focal points for this buck on my property, and an area where I had numerous close calls with him in 2016 – even coming to full draw on him once here. The issue is that on all but one of the occasions, he was coming out into the plot just at or after the end of shooting light. I need him to venture onto my side of the line just five minutes earlier. 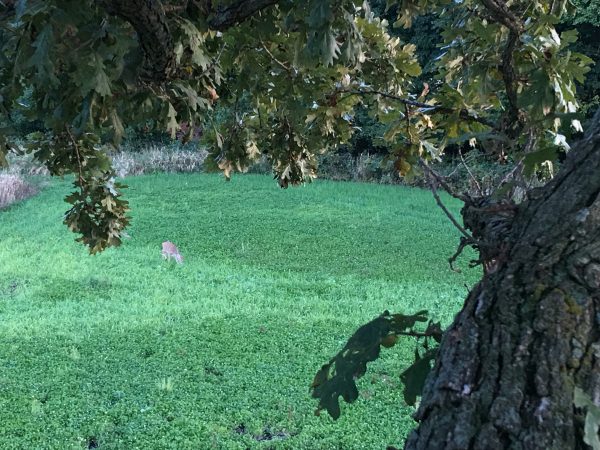 Right now this food plot begins just 5 yards onto my side of a property line, right on the edge of some high quality cover adjacent to one of the areas this deer often beds. To come onto my property he needs to leave that quality cover and step into the wide open. I’m going to change that now by shifting the food plot maybe 30 or 40 yards deeper into my property, and transforming what once was ankle high food plot forage into four or five foot tall native grasses, weeds and forbs. If I can achieve this, he’ll have a 40 yard wide buffer strip of “feathered edge” or transitional cover on my side of the line, which he’ll hopefully be more comfortable stepping into during daylight. So now instead of him staging on the other side of the line, he can do that five minutes earlier on my side, and that might be all the difference I need in getting a shot.

Continuing with this goal of increased daylight usage in my food plots, I’m planning on increasing the quality and quantity of food plot screens I use around these two focal point plots. If you’re not familiar, a food plot screen is some kind of cover planted around a food plot to block things from seeing into or out of a food plot – essentially creating a wall or fence of vegetation. This visual blocker makes deer feel more comfortable stepping into a field during daylight, makes it more likely that you can walk around these areas without deer in them seeing you, and also encourages deer to venture into your plots in order to see inside themselves.

I use a mix of egyptian wheat and sorghum to achieve this, others use ornamental grasses, corn, or evergreen trees. In the past I’ve planted a screen around the outside edge of my main food plot that faces the road – but this year I want to expand that screen to cover all sides of the plot, while also planting a wider strip to ensure full coverage. 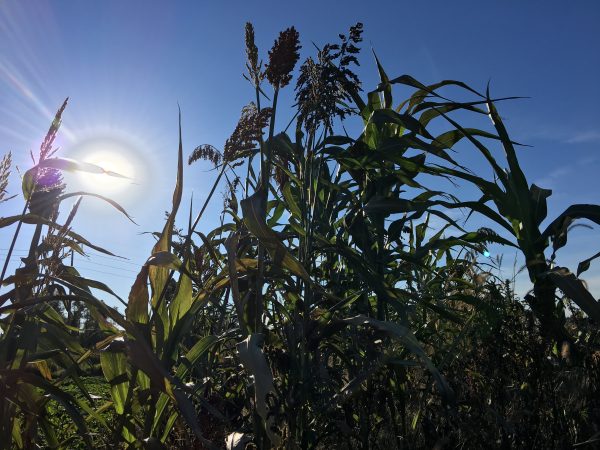 I also am considering planting internal screens, which will separate the food plot into several different segments – thereby reducing social stress on deer in the plot and encouraging movement throughout. I did this several years ago, but not the past few years because of weed issues – this year though I’m prioritizing it, as it’s one more small tweak that might get this buck where I need him.

I first heard of the “calling card” term from Pat Reeve, which essentially defines any small tweak or attraction you can add to a stand site that might increase your odds slightly for a shot opportunity. Last year I added mock scrape trees in my two food plots to hopefully encourage my target buck to come within range and stand still at these scrapes, allowing for a shot opportunity. They worked great last year for getting trail camera photos of him, but as noted already, I never did get that shot opportunity during bow season. This year I plan on improving the scrape trees by “planting” them deeper and more solidly in the soil, as I had issues with the trees leaning and spinning last season. 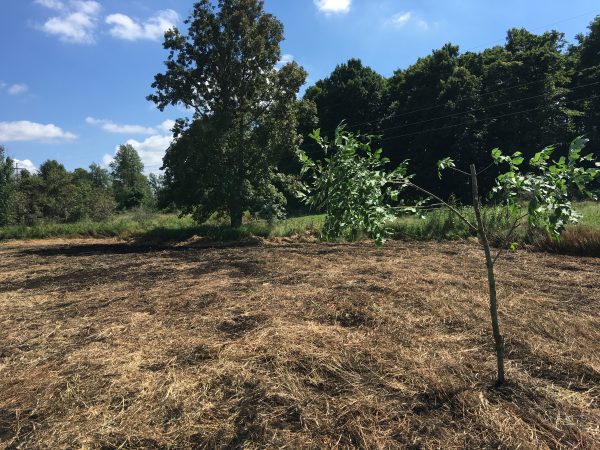 I’m also planning on adding a new calling card to these locations, that being a small water hole at each. I’ll simply be using a shovel to dig in a hole large enough for a 50-70 gallon water tank, burying that, filling it with water on occasion, and placing a stick inside leading out that will allow any rodents to get out.

Again, it’s a small thing, and I’m not expecting it to be some kind of ace in the hole. But it’s one more small reason for that one special buck to come within range of my stand.

By Alex Comstock Here’s something I’m sure you’ve heard many times; Making your hunting property and habitat as high quality as possible is important to hunting success. Obviously. But how can you actually put that into action on your own property? That’s the real question. Lindsay Thomas Jr., the Director of Communications at the Quality Deer Management Association and Editor for Quality Whitetails, is just the kind of person who can help us...

By Erik Barber It’s early November and the rut is in high-gear. The buck you’ve spent your time daydreaming about finally appears and cautiously steps into the small food plot that a handful of other deer visited throughout the day. As he scent checks the plot and gazes into the timber, you release an arrow and the game is over. We’ve seen this exact scenario time and time again on TV or one the web, but is something like this possible if you don...