Transitioning to a new hunting spot can present unique challenges and when the environment that you transition to is completely unlike anything you’ve experienced before, the challenge is even greater.

As much as we might love deer hunting in a familiar place, life happens, right? Whether that’s getting a new job, your significant other wanting to move, or something else altogether. People move all of the time. But when you move, deer hunting doesn’t just go away. That same desire to chase deer will be there regardless of a change of scenery. Or maybe you’re looking for a new challenge and actively choose to travel long distances to hunt a vastly different area.

Either way, when it comes to hunting a new environment, adaptability is crucial and learning how to do things in different ways is utterly important to success.

In the summer preceding the 2015 deer season, I transferred colleges, which would take me from Northeastern Minnesota across the state, all the way into North Dakota. In Minnesota, my bowhunting was conducted in a “city hunt”, therefore I was used to hunting in an urbanized area. It was to the point where I would hang stands in strategic pinch points, but rather than the normal pinch between two ridges, I might have been hunting a small woodlot between two rows of houses where deer would prefer to stay in the timber. It could be tight quarters every now and again. After making the move to North Dakota, I quickly found out how different my hunting style would have to be. Instead of close quarters around houses and people, I was hunting public land out in seemingly the middle of nowhere, and having to walk over a mile into some of my stand setups. There were many differences between the two styles of hunting, and overcoming challenges and learning to adapt to a new environment is never a walk in the park. 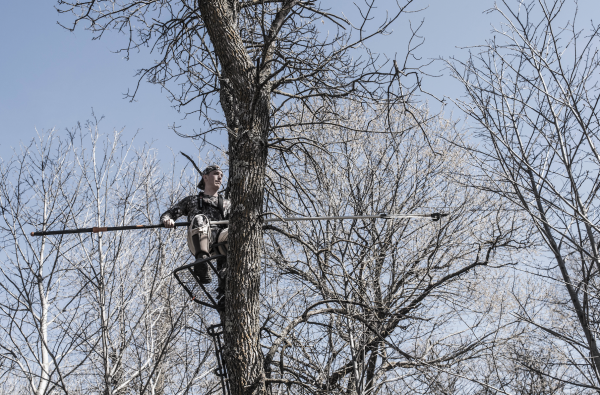 Here’s how I learned my new environment and how you can to.

Learn How Deer React To Everything: The first step for me once I started hunting in North Dakota was to figure out how deer reacted to everything from human pressure and scent, to trail cameras, mineral sites, a car driving down a dirt road when they were out in the fields feeding, etc. What I learned was that deer were much less tolerant of people than where I hunted in Minnesota. It made sense though. Deer in urbanized areas are around people every day, but in more desolate areas such as North Dakota, people usually mean one thing – danger. I learned that I had to play the wind much more carefully, I had to be smart on when and what the weather was when checking trail cameras, and that if a mature buck felt any pressure, he would turn nocturnal or disappear.

Talk To The Locals: One trick of the trade I’ve learned from moving is to integrate yourself among people that are doing what you love to do. Granted, maybe not everyone who deer hunts will do it exactly how you end up doing it in a new environment, but it could be a start. If you run into someone on a backroad during the summer, or maybe while out scouting on public land, strike up a conversation with them. Another thing that you could do is if you’re in a farming environment, talk to the farmers. Nobody spends more time outside than farmers, and I’d be willing to bet you could learn a thing or two about how local deer behave from talking to a farmer. Who knows, you may even get access to a property to hunt.

Don’t Be Afraid To Change Your Hunting Style: When changing hunting environments, your hunting style may have to change. Once again, hunting in an urbanized area, I didn’t have to pay attention to articles talking about public land and the challenges that come with it. There was no such things as hunting ag fields or understanding how they played a part in hunting strategy. In most cases, I knew what were the good areas and where I would hunt. After moving, my hunting style had to completely change. For the first time, I was hunting public land where anyone else could hunt. I had to learn that the best looking areas on a map that were relatively close to a road weren’t usually that good, because that’s what everyone else thought as well. I needed to get into areas that no one else wanted to hunt. I went from using a few trail cameras to running over twenty so I could monitor many different tracts of land. Every single part of my hunting style transformed. I became more mobile, doing more hang and hunts this past year than I have in my entire life. If you want to be successful when you change hunting environments, keep an open mind, and know that most likely you won’t be killing deer the same way you were before.

Learn From Your Mistakes: Inevitably, when you are doing something in an unfamiliar area, you’re bound to make mistakes. Failure isn’t a bad thing though. Learn from your mistakes, and use them to progress as a deer hunter. Failing can sometimes be the best teacher, and it may shape your hunting style in a new location. When you make a mistake, or fail, question why it happened, and then apply it to how you hunt.

Conclusion: Hunting an entirely different setting presents a steep challenge for anybody. You can read up on all different kinds of strategy that might apply to a given area, but until you experience it, you won’t truly know what it’ll be like. Be patient, be willing to adapt, and learn from your mistakes. It won’t happen overnight, but if you keep at it, you’ll start learning how to hunt that new environment.

Save this product
First Lite
Transfer Pack
$325.00
The Transfer Pack is the Whitetail hunter’s workhorse. Purposefully engineered to efficiently pack and unpack every piece of gear you’ll need in the woods, including a tree stand, climbing sticks, and your bow. The Transfer Pack's versatility is perfect for anyone hunting out of a saddle or a tree stand, as its bucket-style design and multiple hanging configurations allow the hunter complete access to extra stowed gear and accessories throughout...
Save this product
Tethrd
Phantom Tree Saddle Kit
$402.99
If you are looking for a nimble and effective way to hunt deer this fall, the Phantom Saddle Kit is the ticket!
Save this product
First Lite
Men's Wick Short Sleeve Crew
$70.00
Whether you're scouting before the season or find yourself in an early season heat wave, the Wick Short Sleeve Crew will keep you dry and comfortable.
Save this product
Vortex Optics
Razor HD 4000 Laser Rangefinder
$499.99
The angle compensated laser rangefinder features four targeting modes (Normal Mode, First Mode, Last Mode and Extended Laser Range Mode) for any ranging environment. The primary HCD (Horizontal Component Distance) range mode provides key angle compensated range information required by the vast majority of shooters in a simple, quick to read display. The Razor HD 4000 also has a LOS (Line of Sight) range mode and scan feature.
Get the latest in your inbox
Subscribe to our newsletters to receive regular emails with hand-picked content, gear recommendations, and special deals.
Our picks for the week's best content and gear
For the whitetail obsessed, with Mark Kenyon
Redefining our connection to food, with Danielle Prewett
Your one-stop for everything waterfowl, with Sean Weaver
Get out on the water with the MeatEater Fishing crew
Technical hunting apparel
Purpose-built accessories for hunting and fishing
Quality elk, turkey, waterfowl, and deer calls
Privacy Policy

How to Deer Hunt a Small Property

Burnout is real. And hunting small properties requires an extra dose of consciousness to make them productive—a few reckless outings will almost certainly decrease future deer encounters. When hunting small properties, it’s generally a good idea to utilize low-pressure tactics while minimizing your human presence. Here are a few low-impact concepts for your next small-property hunts. Undetected Access Hunting mature bucks is no easy endeavor. It...

How to Deer Hunt a Staging Area

If there is a month to consider hunting staging areas, it’s October. That is, at least, if you’re the kind of hunter who spends time on public land, or just generally around pressured deer. In either case, the field-edge pattern has probably died a quick death, and the dreaded reality of educated bucks has come to be. Although we conflate the two frequently, educated does not mean nocturnal. Educated just means not reckless. Not reckless means...

The Truth About Urban Deer Hunting

“Let’s get some pho!” “What the hell is pho?” I asked. Pho, which I later discovered is a Vietnamese noodle dish, had never been recommended to me before as a pre-hunt menu item. But, as I’d soon learn, spicy noodles in broth would be just one of many new experiences on my first urban deer hunt. Culinary epiphanies aside, here’s what I learned while chasing deer amidst the barking dogs, roaring lawnmowers, and nervous suburbanites of the greater...