I occasionally get a little down. Especially on days like this when the weather is lousy, hunting season is many months away, and current events and the corresponding social media is seemingly so divisive. It’s times like these that a hunting story can offer a welcome respite. So if for nothing more than my own benefit, I thought I’d share one – a zoomed in snap-shot of a single morning during my 2016 Montana deer hunt. I hope it can help transport you, if only for a few minutes, to a better place too.

I’d fallen asleep to a lullaby of rain tip-tapping the roof of my truck. And six hours later, I woke up to it again. I could feel the chill of the outside world seeping in through the hole atop my sleeping bag, ice in the air, I burrowed down deeper. Just for a minute more.

Five minutes later I knew I had to get moving – there were deer to see. I sat up, pulling my upper body out of the bag, and yanked on a puffy jacket. Better. Now it was time for coffee. I grabbed a titanium pot and a Nalgene bottle, tipping one until water had poured out and completely filled the other. I set these down to the side, grabbed my backpacking stove next, screwed it into the top of a fuel canister, and then searched for my lighter. Finding it tucked into a man-made canyon between cooler and a gear-tote, I flicked it on, moved the lighter next to the burner and turned the knob. A low hum of burning gas and blue flame filled my makeshift back-of-the-truck home. I patiently waited for the water to boil, breathing full and deep.

Two days earlier I’d hit the road, driving solo from Michigan to Montana with a week of public land whitetail hunting stretched out ahead of me. In the time since, other than a momentary chat with a gas-station attendant or fast-food worker, I’d been completely alone, enveloped only in conversation with myself. Having that kind of time, just to yourself, it’s both rarely available and rarely appreciated. Some might cringe at that kind of isolation. But sitting here silent, very small in the very big wide-open of Central Montana, I was quite content. It’s amazing what the world can say when you’re given just a bit of quiet in which to listen. 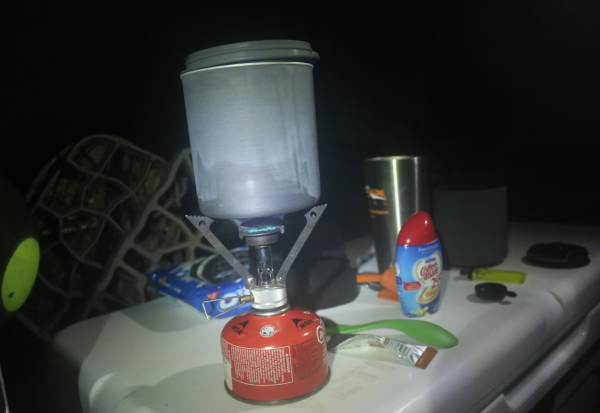 I heard the pot begin to gurgle and got back to work. The instant coffee pack was ripped open and poured into my mug, steaming water poured in on top, a shot of cream, I stirred it all together. The aroma of a sure-to-be-good morning filled the air as light leaked over the horizon, stars disappearing above. It was time to get on with it.

I took a deep breath to ready myself, pulled the sleeping bag down, and then clambering up on all fours, maneuvered my way into a pair of pants. It was still raining and maybe 40 degrees outside, making my vagabond home feel pretty damn luxurious at the moment. But there was much to do. I popped the back window, felt wind driving water into my eyes, and then swung down the tailgate. Quickly now, before everything got wet, I grabbed my keys, wallet, coffee and maps. This morning I would be scouting.

The evening before, I’d sat high in a cottonwood tree overlooking a river-bottom teeming with whitetail deer. First it was a doe and fawn, then a yearling buck, then a few more does, a couple young eight pointers. Then, just before dark, I’d spotted a few deer out behind me in an alfalfa field – bigger bodied, darker colored, a just perceptible silhouette of tall tined antlers on top their heads.

This morning, my goal was to get a glimpse of those deer from a new vantage point, and hopefully confirm where they were headed for the day and where I might be able to intercept them in the afternoon. I ran from the tailgate up to the front of the truck, raindrops sneaking down the back of my shirt. I hopped in, slammed the door behind me and fired her up. Off we go.

Pulling out onto the asphalt, I turned right, rolled up a hill with my headlights off, turned onto another dirt road with a small pull-off and then shifted into park. I sat in silence and took in the view. Below me, to my south and west, I could just begin to see the far-reaching green fields coming into view, intersected by scattered fencerows and clumps of cottonwood trees. A winding brush-flanked river formed a southern border to the fields and the low point of the valley. Further off behind, the land rose up again, first in sagebrush covered prairie, then pine-tree strewn foothills, and then farthest in the distance and highest on the horizon, the snow-covered mountains. I blew on the steaming coffee, took a sip, thinking to myself – this beats the hell out of a day in the office. 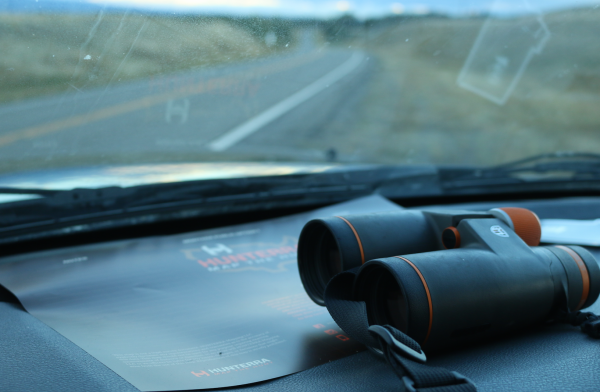 Back down here on the bottom, I saw deer materialize everywhere I turned my gaze. There was a doe and two fawns just a hundreds yards away nibbling on twigs in an island of shrubbery. To the south, along the river, I counted five, then ten, then fifteen more deer slowly making their way parallel to the waterway. A good bit further to the west another group of deer, probably five or six, were making their way back towards the public land I’d be hunting that night. They were bucks, I could tell that much but no more from this distance. I watched as they filed back along a windbreak and then into the thick brush along the river. The rain was still coming down, clouding my view and then clearing as the wipers swished-swashed periodically across the windshield.

Usually when sitting at the bar or circled round a campfire telling hunting stories, we talk about bucks crashing in after a rattle sequence or the big one circling a decoy or a giant chasing does across the crop field – your heart beating a million miles a minute – your friends eating it up. Rarely do we talk about the quiet moments, sitting on a hill, watching and listening and thinking. There’s a story worth remembering there too.

Pulling back onto the gravel road, I eased downhill into the river bottom, mule deer and whitetails occasionally hopping across the road or bouncing off on either side. It was absurd how much wildlife was packed into my view at any one time. I rolled across the river that marked the center of the valley and slowly began my ascent up the other side, truck tires crunching gravel underneath. When I came out of the trees another hay field opened up to the left. A square bodied, dark racked buck stood on the edge, he was standing taught, staring right through my window. You can’t look at one of these Montana bucks without marveling at their chocolate antlers, dark and glistening. What causes this? It was just one of the many questions I found myself asking out here. Back to reality – I watched him through my binoculars, his head bobbing up and down, and then eventually turning to feed again. I mentally marked his position and trajectory, then continued on. Further up the hill, I came around a curve, now approaching the backside of the area I was hunting. A herd of pronghorn burst into flight to my left, moving almost as a single organism, swinging back and forth and then finally out of view. They were here and then gone in what seemed like just a second.

I rolled on – the windows down, but the heat blasting – and watched more deer through my windshield and through my binoculars. More does, more bucks – down in this hay field, up on that hill, crossing over here and over there. I’d been on the road for over an hour now and I’d seen all I’d needed to.

I had good coffee and time enough to drink it slow, taking in the world around me, the world taking me in. I had a plan and I had hope. There were deer to hunt and a place to hunt them.

What more could a guy ask for?

By Mark Kenyon Other than my early season trip to Montana, my 2017 whitetail season has been pretty uneventful. As detailed in past content like the “Hoping for Holyfield” video and the “How To Pattern A Mature Buck” case study article, my hunt for Holyfield this year has largely been a waiting game. After hunting for him on opening night, I’ve stayed out of his area completely – waiting for either some sign of daylight movement OR for the...

Wired to Hunt Weekly: Is Holyfield Even Alive?

Doubts creep up in the mind as the season passes. Holyfield has been the buck of pursuit. The acquired target for Mark Kenyon. But is Holyfield even alive? More in the video.

Earlier this week I headed up to one of my favorite places in the world, our northern Michigan deer camp. On this trip I added another special memory to a long list of deer camp stories, as I had my first Michigan bear encounter on a hunt. Wired to Hunt Weekly is a video journal documenting my DIY whitetail hunting exploits across the country.