Episode 065: Miles City. Steven Rinella talks with his big brother Matt Rinella, along with Janis Putelis of the MeatEater crew. 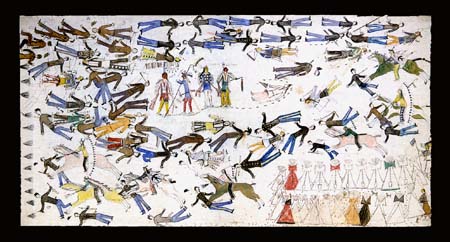 “The Indians made such short work of killing them that no man could give any correct account of it. The first charge the Indians made never slacked up or stopped. They made a finish of it. The indians and the whites were so mixed up you could hardly tell anything about it. “ Hump, Minneconjou, 1881

“The defeat of Custer was not a massacre. The Indians were being pursued by skilled fighters with orders to kill. For centuries they had been hounded from the Atlantic to the Pacific and back again. They had their wives and little ones to protect and they were fighting for their existence.”

Buffalo Bill William Cody, 1885
The greatest book that was ever written about the Battle of the Little Bighorn, “Son of the Morning Star.”
“Here Fell Custer” painting by Eric Von Schmidt

Tom Russell’s “Tonight We Ride”
Harold McGee’s On Food and Cooking: The Science and Lore of the Kitchen
How to put a big llama in a little van
Get the latest in your inbox
Subscribe to our newsletters to receive regular emails with hand-picked content, gear recommendations, and special deals.
Our picks for the week's best content
For the whitetail obsessed, with Mark Kenyon
With Joe Cermele and Crew
Technical apparel for the avid hunter
Purpose-built accessories for hunting and fishing
Quality elk, turkey, waterfowl, and deer calls
Privacy Policy

In this TheMeatEater.com exclusive statement, Steven Rinella addresses questions about the direction of MeatEater, Inc., the company’s creative freedom and the Second Amendment.