Chip Davis didn’t set out to clinch a Super Slam when he started hunting as a teenager in the late 1980s. Killing a wild turkey in all 49 states where they exist seemed like a “pie in the sky kind of dream,” Davis told MeatEater. But by “chipping away, one state at a time,” the Mississippi native just became the 15th hunter in history to do just that.

The road wasn’t an easy one. When he was a kid, Davis’s father and grandfather taught him how to hunt squirrels and whitetail, but the turkey population in Mississippi wasn’t established enough to attract the popularity that turkey hunting carries today.

“We had so few turkeys in the early 80s that was not a thing down here,” Davis recalled.

But the birds still fascinated him so he set out to learn on his own. He “read every single thing I could put my hands on” about turkeys, he said. He read books like “Tenth Legion” by Colonel Tom Kelly and “Old Pro Turkey Hunter” by Gene Nunnery and he learned turkey calling from cassette tapes.

Davis’ greatest teachers, however, were the turkeys themselves. “I spent a few years messing turkeys up every way that they can possibly be messed up,” he said, laughing. “Turkeys were my mentors. What taught me the little bit I know about turkeys is turkeys.”

All 49 birds were mature gobblers, and he bagged his first in Mississippi. A few years later, Davis heard that Missouri had a healthy turkey population so he decided to pursue an out-of-state bird. He got one there in 1992 and fell in love with pursuing turkeys in unfamiliar places (though he still gets his bag limit in Mississippi every year).

His work as a farmer and later as a farm equipment auctioneer gave him contacts with landowners across the country, and he used that network to scout and gain permissions. It wasn’t long before he’d achieved his first Wild Turkey Grand Slam (killing one of each of the four subspecies of turkeys in the U.S.).

“Shortly after I shot my first grand slam, I said, ‘This is so much fun, I think I’d like to chase one in every state,” Davis said. “It seemed like an insurmountable goal, but it was just chipping away one state at a time, little bit by little bit.”

Over the next three decades, that’s what he did. Some years he travelled to one state. Other years he travelled to multiple states, including this year when he bagged gobblers in Hawaii, Arizona, Virginia, and West Virginia. He looked for properties near state boundaries so he could maximize his time and he almost always traveled alone to focus on the hunt.

This year, he sealed the deal on some private land in West Virginia on the second day of turkey season. “It was a bittersweet thing, to be honest with you,” he said. 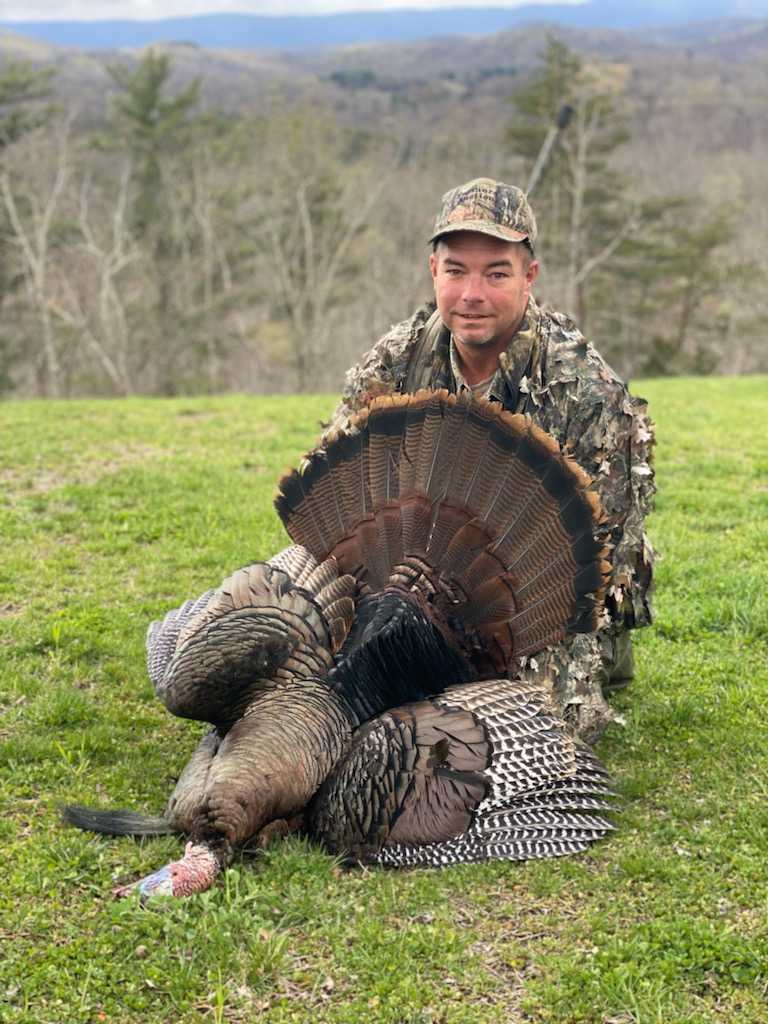 The National Wild Turkey Federation (NWTF) has yet to list Davis on its Super Slam page, but a representative from the records department confirmed for MeatEater that Davis has met the Super Slam criteria.

Never Give Up, Know Your Quarry Talking with Davis, it’s clear that despite his massive accomplishment, he’s not looking for attention.

“I’m not a super turkey hunter by any stretch. I don’t want this to be a pat on the back for Chip. I want my message to be a message of encouragement,” he said. “My goal is for someone else to be encouraged, whatever their passion is.”

He’s also not afraid to talk about his mistakes. He had to repeat hunts in Maine, Ohio, Idaho, Virgnia, and West Virginia. Just last year, he whiffed in both West Virginia and Virginia on a prime piece of real estate he thought for sure contained turkeys. He never found any.

On his hunt in Minnesota, he didn’t find turkeys until the tail end of the first day and stayed within 100 yards of a gobbler on the next day without getting a shot. But he kept with it and bagged that gobbler 15 minutes into his third day.

That persistence has marked his journey through all 49 states. “Everything that you try to tackle, you don’t always succeed on the first time you try. You’ve got to learn and be flexible and bounce back, not give up,” he said.

Preparation is the other key to his success. Before going to a new region, Davis conducts extensive research on the state’s wildlife management areas and other public lands. The early days saw him consulting paper maps. Later, he moved to online information and he’s used onXmaps for the last three or four years. (He said if he had had onX since he started hunting, he could have earned the Super Slam in half the time.)

Once he lands in an area, his first task is to “ground truth” his research by looking and listening for gobblers. Then, his top priority is to determine the local flock’s point in the breeding season. He listens for calls that might help him determine whether gobblers are still establishing a pecking order or have henned up. Once he finds a flock, he tries to observe their behavior if the terrain allows it.

Davis claims to have identified 17 unique segments of the turkey breeding season. He didn’t divulge those details, but he did offer a bird’s eye view of his calling strategy. If it’s still early, he uses aggressive calls to make gobblers think he’s a rival. If the males are already henned up, he uses soft hen calls and focuses on getting into a good shooting position. If it’s late in the season, he ramps up his hen calling to lure in a gobbler who maybe hasn’t seen a hen in a few days.

“I’m a sponge soaking up what the turkeys are teaching me,” he said of his hunting strategy.

Davis said he’s used every type of call, but a mouth call is his go-to. He doesn’t focus so much on making the right sound as using the right rhythm and cadence.

“Some people may confuse me with a good caller,” he said. “I call well enough to get them to 30 yards. But calling is my favorite part. It’s got so much more to do with rhythm and cadence. It’s got more to do with language than with sound.”

Making It Happen Davis launched into this year’s turkey season with the end in sight. He combined a turkey hunting trip to Hawaii with a 25th marriage anniversary celebration with his wife (nice one, Chip), and flew back to Arizona to snag a turkey on a Native American reservation.

Davis’ journey no doubt strikes many hunters as a dream come true, but when you sink $12,000 on a trip to Hawaii, it’s also stressful.

“When you go to a place like Hawaii, it’s right down to the wire. There are expensive airline tickets. You feel pressure to get it done while you’re there and that’s unfortunate because it takes away from the turkeys,” he explained. “I’m proud of what I’ve accomplished, but there was pressure to get it done.”

His final trip to Virginia and West Virginia was a lengthy one, where he’d been skunked the year before. He bagged a bird in Virginia on opening day and spent time with friends in North Carolina as he waited for the West Virginia opener.

When he arrived on the property in West Virginia, he knew it was going to work. “I thought, it’s going to happen here. There are turkeys here, it’s the right property,” he said.

His predictions came true. He spent opening day waiting out a winter storm and reflecting on the hunts in the other 48 states. The next day, after a short pursuit, he bagged his Super Slam bird.

“I didn’t cry, I didn’t scream, or do anything. I just stood up and walked over there to him and knelt and just looked at him,” he said. “I spent a few moments being really, really thankful for the last 30 years and felt humble that I was allowed to do this and for the wild turkeys.”

When asked his favorite thing to do with turkey meat, Davis said, “Eat it!” His best dish is fried turkey breast, which he said he’d rather eat than ribeye steak.

Davis’s Super Slam is a historic personal achievement, but it’s also a testament to the efforts of hunters and conservationists. Only 1.3 million turkeys roamed the U.S. when the NWTF was founded in 1973. Today, there are almost 7 million turkeys, and Davis just became the 15th hunter to prove that every state except Alaska has a huntable population of birds.

A limited-edition heirloom pot call made from a Kansas Black Walnut tree felled by Steven Rinella and Jason Phelps. This is a limited run product, each is stamped with a sequential number that marks the order in which it was finished.

Helps you disappear when you get close to your quarry.

You can kill a turkey without making a call, but that’s kind of like playing catch with yourself by tossing a tennis ball against the garage and waiting for it to bounce back. Bushwhacking a gobbler as he walks through, or not being able to muster up a single friend to toss a ball around, are both kind of a letdown. I can’t help you with the latter, but if you’re hesitant to call for any reason, there’s hope. Speaking turkey is an inexact science...

A North Carolina turkey hunter is celebrating a once-in-a-lifetime achievement after he bagged a rare all-white gobbler on his family land in the mountains of Burke County. Thirty-year-old Troy Cornett of Granite Falls, North Carolina, had been chasing the bird for years before he finally harvested it on April 9, 2022, the opening day of North Carolina’s statewide spring turkey season. The white tom made its first appearance on Cornett’s family...

How to Shock Gobble a Turkey

The beauty of longbeards (and jakes) is that sometimes you can make them tell you exactly where they are. Using a bird’s willingness to gobble and instantly betray his location is among the most beautiful and useful tricks in the book. Eliciting a shock gobble is sometimes as easy as whipping out a crow call or even shutting your truck door a little too loudly. But, more often than not, it’s requires a strategic move that demands a better...