To Kill a Late Season Buck (Without a Food Plot)

If you are not one of those hunters who has a carefully tended food plot on an exclusive piece of whitetail deer real estate, do not despair. You can fill your tag too. Here are some tips to finding success late season.

“I don’t have any good bucks around late season so it’s not worth hunting.”

If I had a dollar every time I have heard something like that.

I cover thousands of acres, both public and private, looking for a mature buck most late seasons. Last year I found only one. But one is all it can take and that 20-inch 10 pointer ended up going home with me. 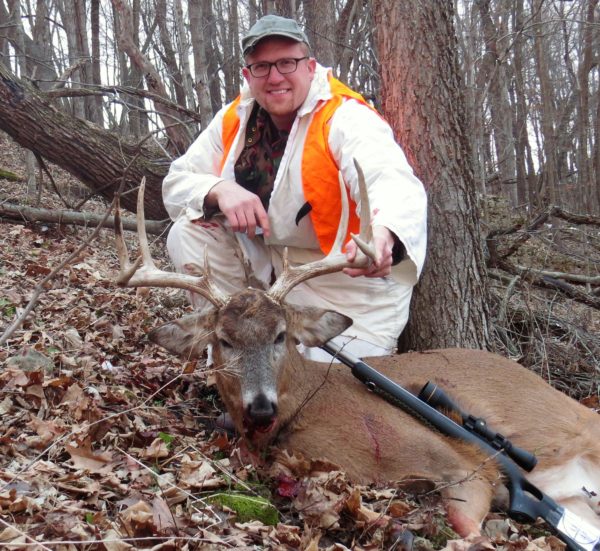 2. Understand weather conditions and how they affect deer

You need to understand weather from a deer’s perspective. Late season weather can be extreme. Bucks are also at their most vulnerable to weather changes post-rut.

Cold weather can be great of course. Cold is relative to where you are at in the country. In the upper Midwest temperatures need to get down to 20 degrees or so to see deer start to concentrate around the best food sources. When temperatures drop to the single digits and below deer frantically seek the best food available.

Snow makes late season hunting simpler and not just because food sources become more limited. I want to see tracks. If it is muddy, tracks can still be found, but if the ground is bare and frozen this becomes impossible. A big buck’s tracks are usually distinguishable. I have written about this before.

I first learned of the buck discussed above through his track. He had distinctive big, square toed hooves.

I like a good blizzard. During the worst weather in hilly country deer become concentrated in sheltered bottoms or low on leeward slopes. On flatter land they may seek out conifers, shelterbelts, or whatever blocks that wind best. 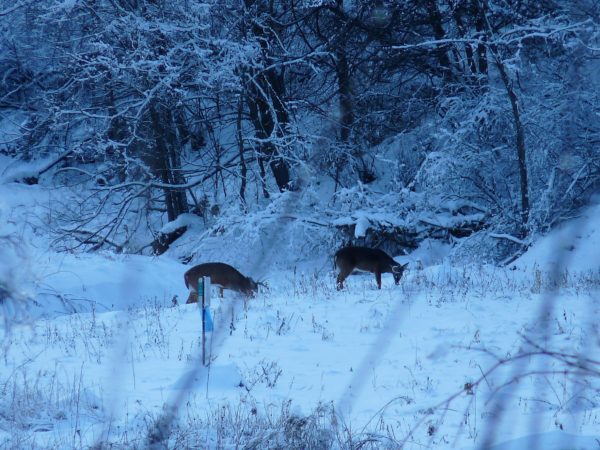 I watched these bucks in a sheltered low area when there was a Winter Storm Warning in effect. As you can see by the boundary sign they were just beyond the public land when I took the photo but they eventually came past me.

When temperatures warm up after a bitter cold snap deer remain focused on food for some time to regain lost energy. The buck discussed above is also a good example of this. Temperatures had warmed up to the 30s after a couple weeks of bitter cold but he was still desperately seeking food. Snow had partially melted and I figured out he was feeding on melted off pasture grass at the head of a sheltered valley during strong winds.

If you face extended periods of warm weather late season, you can either sit around and complain about it or do some extra scouting to make up for the lack of concentrated deer activity. I have killed late season bucks in temperatures from 60 degrees to -10F.

I have killed bucks a lot of different ways late season. I have killed them heading to a food source or returning to bed. I have killed them in specific areas sheltering from bad weather. I have killed them still hunting and using their tracks to guide me. One of the most lethal tactics I have used is small two and three person nudges. These aren’t your grandpa’s deer drives. This is slowly bumping the deer, tactically, from bedding and killing them on known escape routes. Each of these tactics would be worthy of a separate article. My best advice is just try something new if what you are doing isn’t working. 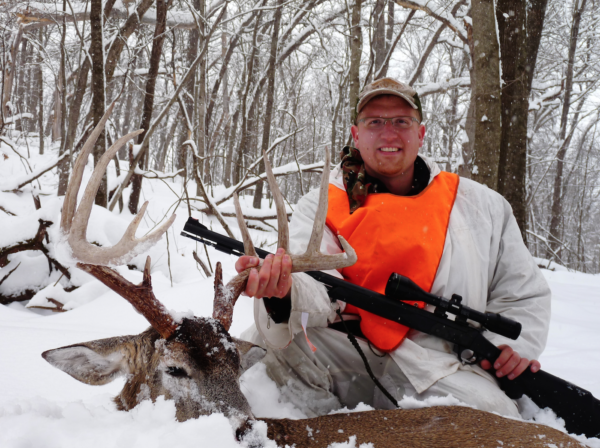 This buck was killed on a nudge involving three of us hunters. He was traveling with the wind in his advantage and trailing well behind some other deer after being bumped from his bed. I was sitting just far enough to the side of the travel route that they could not smell me.

4. It is all about bed and food

I listed bedding first for a reason. A pressured big buck is only alive late season because he found somewhere foolproof to hide. It is also true he needs good food to replenish himself post-rut.

In bitter cold weather deer will favor warmer bedding southerly slopes for thermal energy. Strong cold winds push them lower in the hills for shelter. Unusually warm late season weather drives them to shaded north slopes to stay cool in their heavy winter coats. The oldest bucks will always seek out very secure bedding as long as they are healthy but these general rules still apply.

Food is relative to location. On a great mast year deer may feed on acorns most of the winter in many places. Other mast crops like honey locust can become primary food sources as when there are no more acorns. When snow is melting, deer favor food sources on bare ground. Browse is important but not always a destination food source. Clear cuts can be an exception to that. When snow gets deep, or just has a thick crust, deer depend even more on browse. In the harshest conditions I notice deer feeding on red cedar and stripping the bark off softwood trees such as elm. Let the deer teach you what they are looking for.

In farm country I have learned not only to observe what fields do not get plowed under or have stubble bailed, but also harvest efficiency. Some combines leave a lot more waste grain than others. Another consideration is that any corn field that had wind damage probably has more waste grain after harvest. Take a walk through a few fields and you will see. 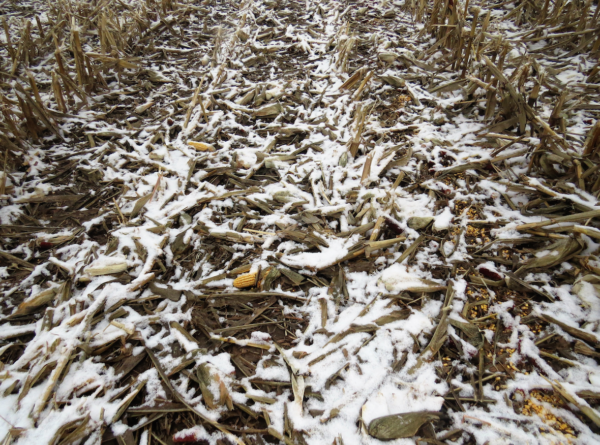 You can see the waste corn in this photo. Deer were using this prime food source all winter long.

In my experience late season progresses differently than other deer seasons with the best hunting at the end. I have killed most late season bucks in the last ten days of the season.

I often spend the first few weeks just searching for a good buck. When I find him he is not going anywhere. The rut is a thing of the past. Still, pressured late season bucks are not the ones you see on most hunting shows. He has a secure bedding location and preferred food sources. That is why it is important to have a wide variety of tactics that you are willing to try.

Hunting late season pressured whitetails is a lot of work but to me that is part of the reason I enjoy it. Things most enjoyable are often the hardest gained. If you are hunting late season this year, good luck.

If you’d like more from Joe, listen to Episode #150 of the Wired To Hunt Podcast or click here to view other articles of his on Wired To Hunt.

The Cure For Your Late Season Hunting Troubles

By Mark Kenyon It was a chill of several different sorts. 20 feet up a tree last night, I of course felt the brisk ice-in-the-air chill of a mid-December wind. The kind of chill that blushes your cheeks, dribbles snot down your whiskers, and numbs the farthest tips of your fingers. But I also felt a different chill, one that cut further to the core. The kind of chill that slips into the deepest darkest recesses of your mind, the kind that...

By Alex Comstock The following is how you put down an early season mature buck; find one on a food source in the summer, go set up a treestand where you saw him feeding, and make it happen opening day. Works every time, right? It sounds great, but the chances of it working out that nicely are slim. With that said, hunting during the early season is still one of my favorite times to hunt mature bucks, and it can be a great time to have a chance at...

Finally, after a long break, we’re back with new #WiredToHuntWeekly videos. This year I’ll be trying to produce more short video updates like this – nothing super heavily produced or fancy – just raw video blogs from my hunting adventures and experiences across the country. A little glimpse into my world and what goes into my personal way of chasing whitetails. So with that said, in today’s episode I’m taking you along for a quick tour of my very...