Eugene Stoner is one of the most influential firearm designers of all time. While he was not as prolific as John Moses Browning, Stoner's inventions were a dramatic departure from traditional gun design in the post-WWII years, and they drastically changed the entire course of firearm design in the latter half of the 20th century.

Stoner is best known for the AR rifle platform that he developed in the 1950s while working for ArmaLite. The rifle was revolutionary not only for its modularity and simplicity, but also because it incorporated modern materials that Stoner used in the aircraft industry—materials that had never before been seen in firearms.

When guns were still made of wood and steel, Stoner built his two-part AR receivers from lightweight aluminum alloys. The furniture on his new in-line rifles was weather-resistant fiberglass and later polymer, colored brown, green, or black instead of being shaped from moisture-absorbing walnut.

The AR-10 chambered in .308 Win. came first. Stoner then downsized it to accommodate the new .223 Rem. cartridge and the military's correspondingly new philosophy of using small caliber, high velocity ammo over larger calibers like the old .30-06. The result was the AR-15, which would become the military's M16 rifle. It is still in service today as the M16A4, making it the longest serving rifle in U.S. military history by far.

Over the next 60 years, the modular design of the AR-10 and AR-15 would become the basis for an array of modern firearms now used for military and law enforcement applications, hunting, competition shooting, long-range shooting, plinking, and home- and self-defense.

Stoner's Early Years Colt acquired the proprietary rights to the AR-15 in 1959 from ArmaLite's parent company, and Stoner soon followed leaving ArmaLite for Colt in 1961. There he worked on a number of projects, primarily the Stoner 63 machine gun system.

He continued working on machine-gun designs at KA and also developed the SR-25 rifle, an improved version of the AR-10 that was built for accuracy. The rifle would become the Mark 11 Mod 0 Sniper Weapon System used by U.S. Navy SEALs.

Sidearm Upgrades for Law Enforcement
In the early '90s, law enforcement was regularly finding itself outgunned in metro areas where gang violence was high. At this time, many local and state police officers, as well as federal agents, were still carrying .38 Special revolvers.

Departments that could afford to do so began transitioning to semi-automatic 9mm pistols. In 1985, the U.S. military adopted the 9mm M9 pistol, known to the civilian world as the Beretta 92FS. A number of police departments, like the LAPD, soon followed.

While some departments and agencies adopted modern semi-autos like the SIG Sauer P226 and P229, others chose the Glock 17 or 19. Understandably, Colt wanted a piece of the sales from police departments updating their arsenals and saw an opportunity to get ahead of the technological curve in the handgun world.

A Happy Coincidence
While Colt launched the Double Eagle pistol series in 1989 (a double-action version of the 1911), the storied gunmaker wanted something to compete directly against Glock: a high-tech 9mm with a polymer frame.

Coincidentally, around that time, Stoner and C. Reed Knight at KA had designed a prototype intended to be a versatile, rugged, and lightweight compact handgun.

What they came up with was solid. Colt saw a gun they thought could be molded into what they wanted to bring to market. KA sold the production rights for Stoner and Knight's design to Colt, who proceeded to transform it into the Colt All American Model 2000 pistol.

Word spread that this would be a revolutionary new firearm redefining how people thought about American-made semi-auto handguns. Colt put a lot of cash behind a huge, far-reaching ad blitz before the Model 2000's formal introduction at SHOT Show 1990. It was supposed to be the gun that would carry Colt into a new millennium.

Instead, the Model 2000 wound up being one of the most hated modern handguns ever. It was an absolute and utter failure. 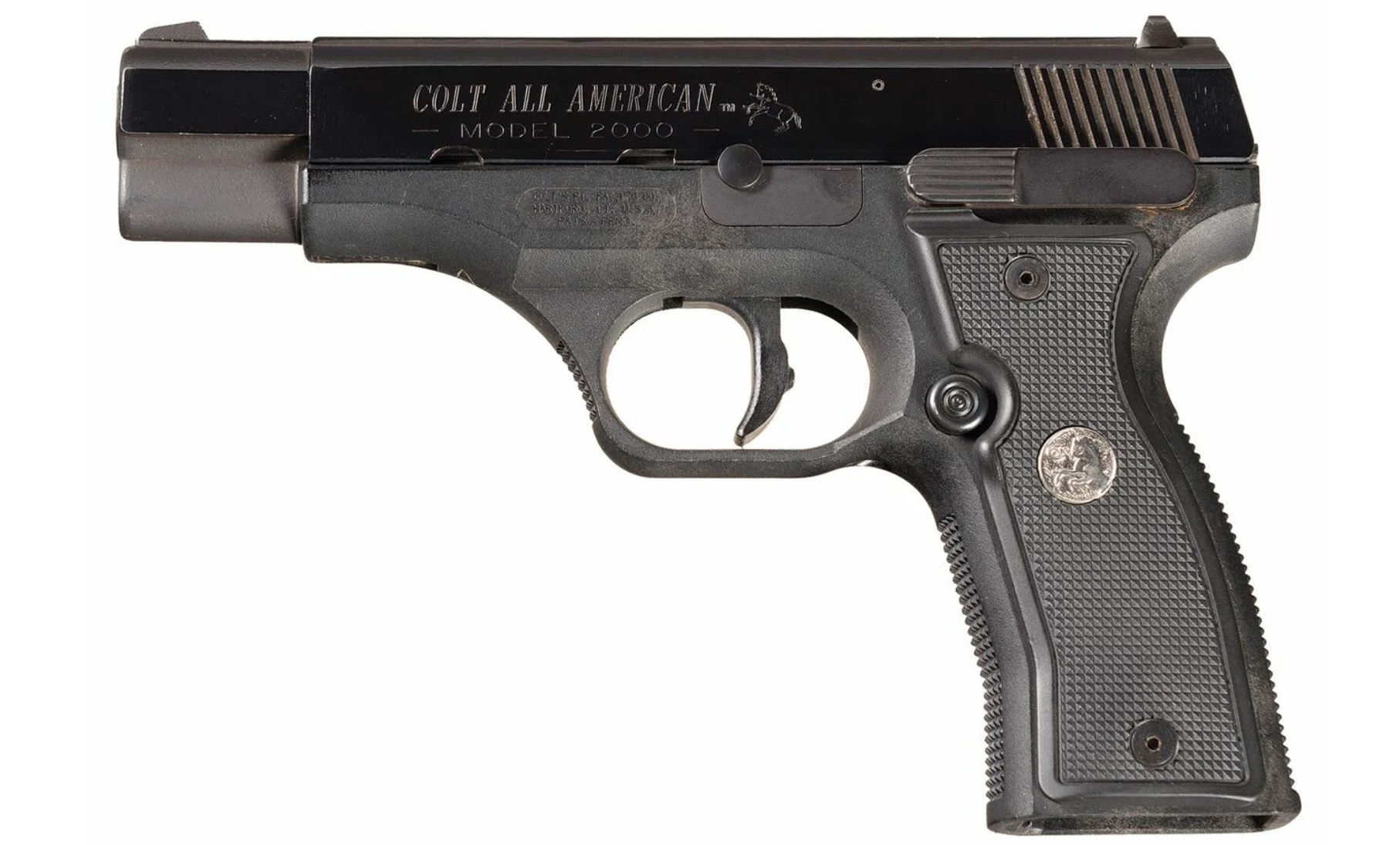 The Design
The Stoner/Knight prototype was an interesting gun that used a rotating barrel and five locking lugs instead of a tilting Browning-type design. It also had an interesting trigger, which we'll get to later.

Once the gun left Stoner and Knight's hands, Colt's engineers started changing things. The gun that went into production was a lot different from the KA prototype.

On paper, the Model 2000 was pretty close to what we expect from a 9mm pistol. Even today, some features were a little ahead of their time.

It was striker fired instead of being a DA/SA or DA-only design, something pretty much only Glock was producing at the time, and what likely drew Colt to the prototype.

The gun Stoner and Knight built had a steel frame and a single-stack magazine, which became a polymer frame and a double-stack 15-round magazine. It had the same capacity as the Beretta 92FS. The Model 2000 would also be offered with an aluminum-alloy frame.

The 2000 was easier to field strip than the Beretta or the Glock 17 for that matter. Once the slide was removed, the two-piece trigger assembly could simply be lifted out of the frame, foreshadowing the modular design of the SIG Sauer P320 and its fire control unit.

The trigger mechanism on the Model 2000 that Stoner and Knight came up with was certainly unique. It used a patented roller bearing system to create a trigger that didn't hinge, but instead pulled straight back into the frame of the gun. This created a somewhat long, but extremely smooth, trigger pull.

Where It Went Off the Rails
That all sounds great, so what the hell went wrong?

Well, a number of things which were all the result of Colt's re-engineering and production methods. In order to make the Model 2000 marketable as a duty pistol, Colt lengthened the barrel and also added length to the grip, making the pistol larger overall.

The prototype gun had a one-piece slide, but Colt's longer slide was actually two pieces. The narrow front piece acted like a large barrel bushing that was removed when the gun was disassembled. Astonishingly, the gun's front sight was mounted on this removable part, and that's bad for accuracy.

The Model 2000's trigger was, by far, its biggest problem. The original specs called for a 6-pound trigger pull weight, which is a little heavy but totally acceptable on a duty gun. For the production gun, Colt increased the pull weight to a knuckle-battering 12 pounds on the recommendation of the company's liability attorneys. Combined with the long pull of the gun's odd trigger mechanism and an equally lengthy reset, the Model 2000 was exceptionally difficult to shoot accurately or quickly. That's a problem for law enforcement.If the pistol had functioned well, it may have been possible to overlook its aesthetics—which is why people assumedly buy Hi-Point pistols. But since the Colt 2000 was an absolute horror to shoot, people came down on its looks hard, and deservedly so.

The thing was objectively hideous. The muzzle end looked like it came off an old Browning Hi-Power pistol, while the grip and frame are a cross between Beretta and FN frames of the era, with a generic and bulky steel slide on top. It looked awkward and by all accounts, didn't feel much better.

The Model 2000 also suffered from reliability issues as well as accuracy issues—even beyond what a heavy trigger caused. In short, the gun was a damn mess.

The way Colt built the All American 2000 is partially to blame for its shoddy construction. Colt contracted the creation of the gun's parts to an outside vendor instead of creating them in house. The components were then assembled in Colt's West Hartford factory. That's right, Colt took a gun they didn't design, tweaked it to meet a set of specs, farmed out its production, and then slapped it together for sale with the Colt Pony Logo on it. What could go wrong? Pretty much everything. 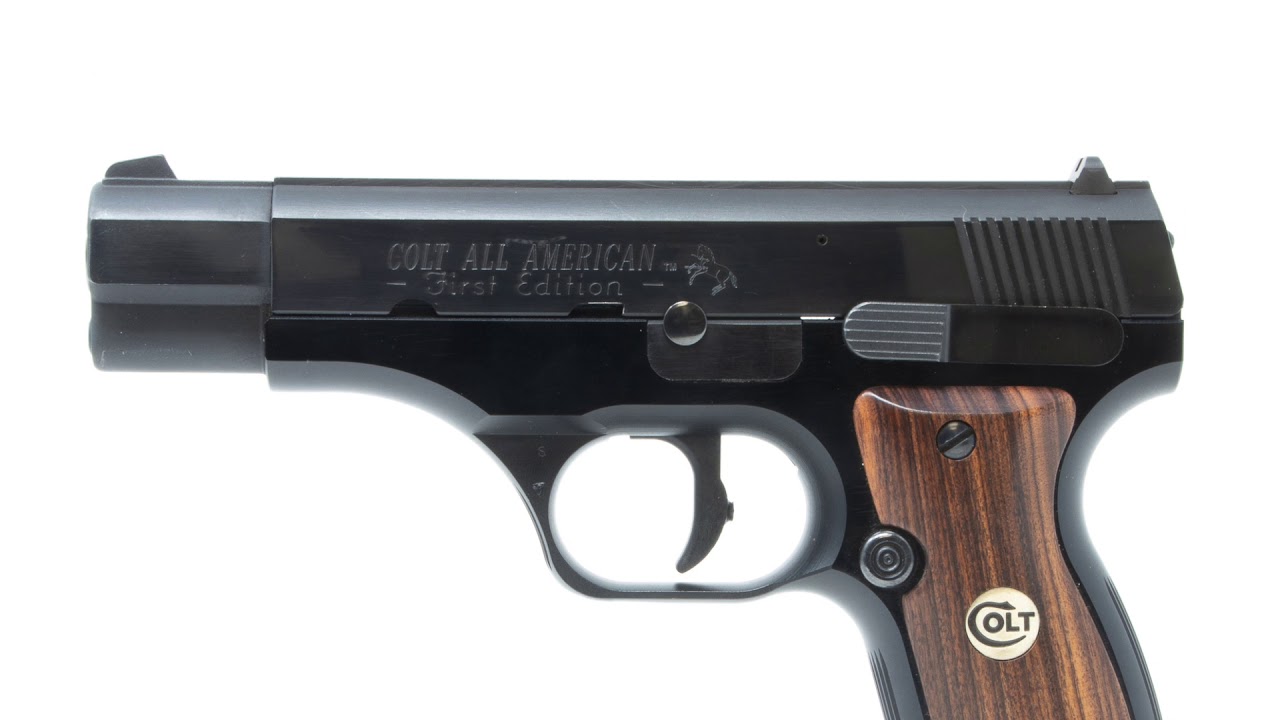 It didn't take long for word about Colt's new gun to get around. Sales following the gun's release in 1991 were terrible and never picked up. The Model 2000's short life ended in a death rattle when it was recalled in 1993 for safety issues.

By 1994, it was all over. Colt ceased production and the Model 2000 went down among the worst failures in the gunmaker's long history. The Double Eagle pistol line got some traction for being one of the few guns at the time offered in 10mm Auto, but it too proved to be a failed enterprise. Things were getting rocky for Colt at that point.

Sadly, it was also the final major firearm design from Eugene Stoner before he passed away April 24, 1997. The Model 2000 was a lousy final entry for one of the world's greatest gun designers and inventors, and its failures weren't even his fault.

Firearm Hunting
Get the latest in your inbox
Subscribe to our newsletters to receive regular emails with hand-picked content, gear recommendations, and special deals.
Our picks for the week's best content
For the whitetail obsessed, with Mark Kenyon
With Joe Cermele and Crew
Technical apparel for the avid hunter
Purpose-built accessories for hunting and fishing
Quality elk, turkey, waterfowl, and deer calls
Privacy Policy

The Guns of the American Mountain Man

John Colter wasn’t about to lose his gun. The now-famous mountain man was travelling on the Lewis and Clark Expedition in May of 1806 when his horse slipped and fell during a difficult, deep-snow trek over the Bitterroot Mountains in the Idaho panhandle. Man and horse fell into a stream, where they were washed for a “considerable distance” by the icy, rushing water, according to historian Burton Harris. Colter sustained no serious injuries, but...

The History of Wildcatting in America

The term “wildcatter” is most frequently used to refer to oil prospectors from the late 19th century who drilled exploration wells in search of new petroleum fields. But the word also refers to another group of optimistic entrepreneurs, folks who hope to strike it rich (or at least become famous) in a much different way. “Wildcat cartridges” are firearm cartridges that haven’t been reviewed by a safety association or adopted by a big ammunition...

The Guns of Coen Brothers Movies

Movies directed by Joel and Ethan Coen characteristically include distinct atmospheres, quirky characters, witty dialog, and a good bit of cleverly executed violence. That’s why their works are some of Steve Rinella’s favorites. When gunplay is in order, the Coens, who write, produce, and direct their movies, are notoriously obsessed with details. They accurately select firearms for the era and depict them realistically. But even the Coens can...