The Hardest and Easiest Ammo to Buy Right Now

Gun owners are at the point in the ammo shortage when they’d be happy to find something—anything—to shoot. What started as a COVID-induced blip has turned into the worst ammunition shortage in recent memory, and industry insiders are predicting it will last through the end of the year.

Hunters and shooters looking for a box of their favorite cartridge have been hard pressed to get their fix, but all is not lost. We scoured the internet and spoke with ammunition dealers and manufacturers to find the hardest and easiest cartridges to buy right now—and the results may surprise you.

The Hardest Cartridges to Find
Everything is hard to find right now, from handgun ammunition to hunting rounds to oddball cartridges. If you’re looking for it, you’ll have a tough time getting your hands on it. Hornady told us that every cartridge they produce is backordered, and Brownells said that most of their ammunition sells out within an hour.

The Easiest Cartridges to Find
This question is more difficult to answer, but we have the beginnings of a hypothesis.

We started by taking a close look at five of the biggest and best-known ammunition dealers on the internet: Midway USA, Brownells, Natchez Shooter’s Supply, Sportsman’s Outdoor Superstore, and Palmetto State Armory. There are others, but these are five of the biggest (and they use easy-to-analyze search engines).

We started by comparing the ratio of the number of available SKUs (stock keeping units) to unavailable SKUs. Basically, this tells us what percentage of a dealer’s total product selection of rifle, handgun, rimfire, and shotgun ammunition is available.

Rifle ammunition is the most available. Averaging the five dealers, 3.5% of their total selection was in stock when we checked last week. If you think that’s depressing, it gets worse. Only 2% of handgun ammo was available, 1.7% of shotgun ammo, and 1.2% of rimfire ammo. 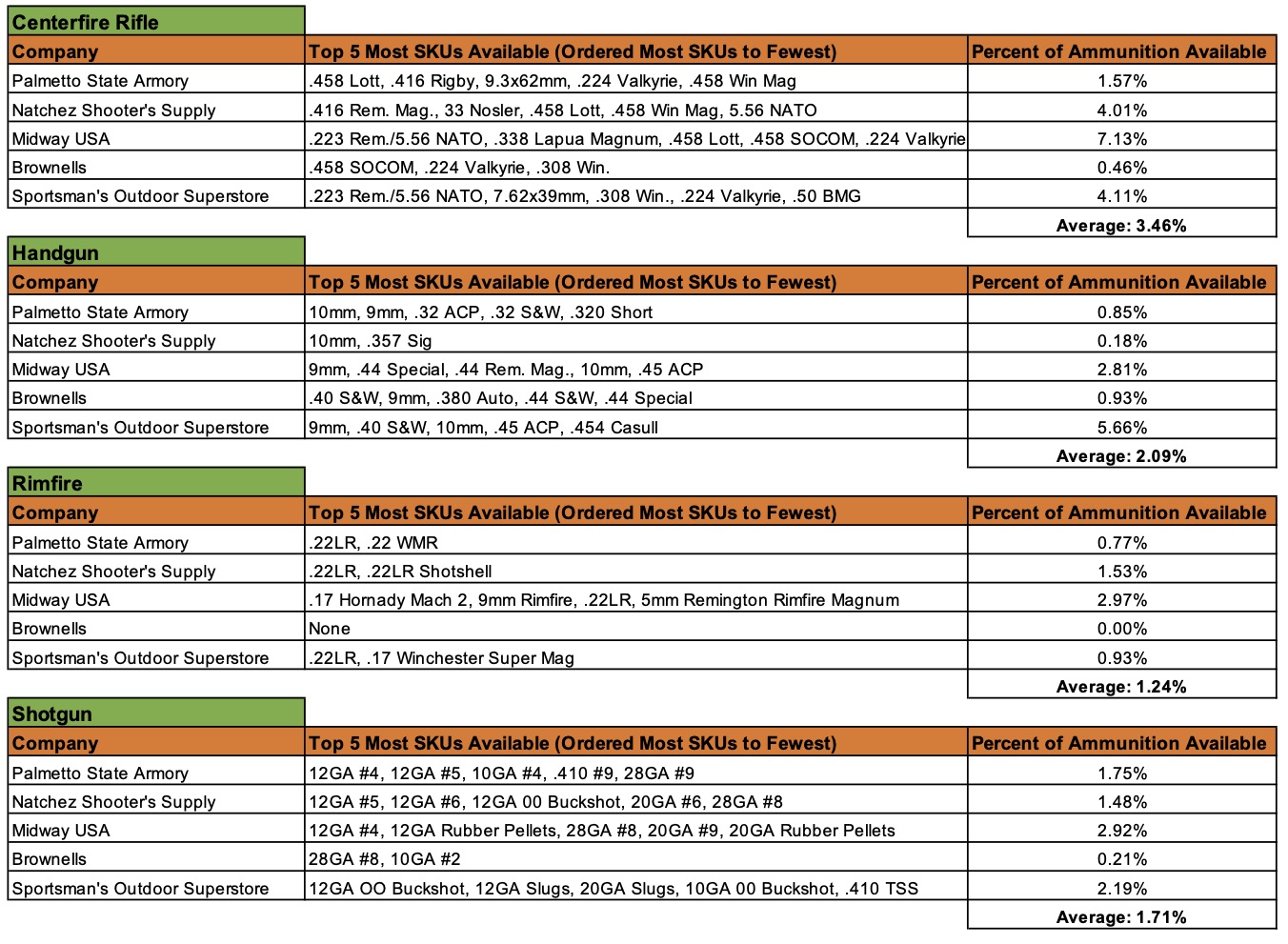 Inventory moves so fast that these ratios may be slightly different today. But if you’re looking for a particular category of ammunition, centerfire rifle is probably your best bet.

Next, we looked at the top five cartridges with the most SKUs available on each website. If you’re looking for a single box of any given cartridge, this tells us what you’re most likely to find. To our surprise, cartridges like .223 Rem., 9mm, and .22 LR were in the top five at almost every dealer.

You’ll pay through the nose for any of these cartridges, and you may only find a single box of what you’re looking for. But the most popular cartridges can still be found online.

The remaining cartridges in each dealer’s top five list were what you might expect during a shortage. You can still find lots of .416 Rigby and .458 Lott, for example, and 10mm was the most common handgun cartridge at Palmetto State and Natchez.

Bottom line? As a general rule, the easiest cartridges to find are the most popular—and the most expensive.

The .224 Valkyrie is the exception to this rule. While the Valkyrie is neither super popular nor super expensive, all dealers except Natchez listed the .224 in the top five number of SKUs available. Even Natchez still had three SKUs available for purchase. If you’re looking for a rifle you can still shoot and don’t want to invest in an elephant gun, give the .224 Valkyrie a look.

What Ammo is in Stock Right Now?
We looked at a single moment in time, so our findings might be different two weeks or two months from now. As a good example, we recently heard that Natchez was selling 1,000-round cases of 9mm for $0.55 per round, but when we looked, the only handgun cartridges in stock were 10mm and .357 Sig.

We ran our findings past a few industry experts, and they verified our hypothesis.

“The super high-volume stuff, .223 Rem., 6.5 Creedmoor, .308 Win., if you’re just looking for a box, yes, that’s probably going to be the easier find because it’s being pushed out in such volumes,” said Seth Swerczek, communications manager for Hornady.

As for the large and/or expensive cartridges, Swerczek speculated that these rounds are too expensive to stockpile and no fun to shoot.

Buyers can find the most popular rounds, as we discovered in our internet sleuthing. But they’ll either pay way more for those rounds or they’ll have to wait for their order to be fulfilled.

“You can find any caliber you want online today, but if you want it now, you'll pay a lot for it,” Morton said. “This is just the reality of today's market. If you want to save money, you can get on an online waitlist or stand in line at 5 a.m. at your local big box store—but either way, you'll need to be patient to get ammo at a reasonable price.”

But what about the .224 Valkyrie? Swerczek pointed out that smaller cartridges are easier to make in higher volumes, and the market for the Valkyrie is tiny in comparison to the .223 Rem.

“I think the overall pool of shooters to buy [the .224 Valkyrie] is much smaller than the .223. They’re buying huge amounts of Valkyrie ammo, but the number of shooters is drastically smaller,” he said.

Keep Looking
Whatever cartridge you’re looking for, patience is the key to finding reasonable prices—patience, and quick keyboard fingers. The Brownells website offers an “Alert Me When Available” option, as do many other big dealers. Setting those alerts and jumping on those opportunities can yield results, and hunters should start looking now for the cartridges they need for fall hunting season.

Ammunition is out there, and manufacturers are doing everything they can to keep up with demand. Eventually, the shortage will end. Until then, high prices and empty shelves are just facts of life.

The Total Guide to Buying a Suppressor

Once the territory of only the most dedicated gun nuts, suppressor use in the United States is on the rise among casual shooters and hunters alike. “This year has seen the highest demand that we’ve ever seen, and we definitely expect to see an increase in demand around November,” said Knox Williams, president of the American Suppressor Association. If you’ve considered jumping into the wonderful world of quiet shooting, you’ve come to the right...

What the “Universal Background Check” Bill Means for Gun Owners

Most hunters know that purchasing a firearm from a licensed dealer requires the purchaser to pass a background check conducted through the federal instant check system. In many states, however, purchasers can also buy guns in private transactions that do not require the buyer to pass a background check. The United States House of Representatives passed legislation last week that would regulate these private sales in all 50 states. It’s being...

How to Estimate Yardage with Just Your Riflescope

More than any other technology, precise electronic rangefinders have allowed hunters to make more accurate shots at longer distances. To take one real-world example: at 450 yards, a 150-grain .308 Win. round drops about 40 inches. At 500 yards, that same bullet drops an additional 14 inches. Without an exact range, hunters don’t have a hope of landing those kinds of long-distance shots. Unfortunately, whether from water damage, dead batteries...