The Guns of America’s Most Famous Hunters

The long tradition of American hunting isn’t without its heroes. As more settlers moved West, a few men rose to national fame for their skill in the field, and celebrity hunters became a distinctly (if not exclusively) American phenomenon. For some of these outdoorsmen, their firearms became just as famous as they were.

This isn’t an exhaustive list, but if you ask someone in 2021 to name a famous American hunter, chances are good that one of these woodsmen, presidents, or authors will come to mind.

One of the first real-life folk heroes of the United States, Daniel Boone, wouldn’t have gotten very far without a reliable rifle.

Boone likely carried a variety of long rifles typical of the period surrounding the American War for Independence, according to Danny Michael, the associate curator at the firearms museum in the Buffalo Bill Center of the West. These muzzle-loading rifles used a flintlock firing mechanism, a rifled barrel over 30 inches, and bores in the mid-.30 to .45-caliber range.

Legend says that Boone’s favorite rifle was dubbed “Old Tick-Licker” due to its ability to snipe a tick off an animal without hitting the animal. Boone is frequently described in the novels written about him as “leveling” Old Tick-Licker, taking “steady” aim, and dispatching both predators and prey.

One of Boone’s biographers (some might say “propagandists”) said the settler’s “sole reliance” for both “subsistence and defense” was an “unerring rifle.”

William Frederick “Buffalo Bill” Cody became famous both for his exploits in the field and on the stage. His rifle, nicknamed “Lucretia Borgia” after a supposedly murderous Italian noblewoman, must be among the most famous American firearms.

He used the Springfield Model 1866 rifle to kill many of the animals that earned him his nickname, and the rifle’s first 12 shots in Cody’s “Autobiography” results in 11 dead buffalo.

Cody describes his “dear old” Lucretia Borgia as “an improved breech-loading needle-gun which I had obtained from the Government.” This trapdoor design allowed hunters to load from the breech (rather than the muzzle), and Springfield modified many of their old muzzleloaders to accept the new .50-caliber centerfire rifle cartridge.

Later, “Buffalo Bill” used an 1895 Winchester to bag game near Cody, Wyoming, according to Michael. The popular lever-action rifle appears in pictures with the hunter and showman, and other pictures show an even greater variety of firearms used by Cody and his party. 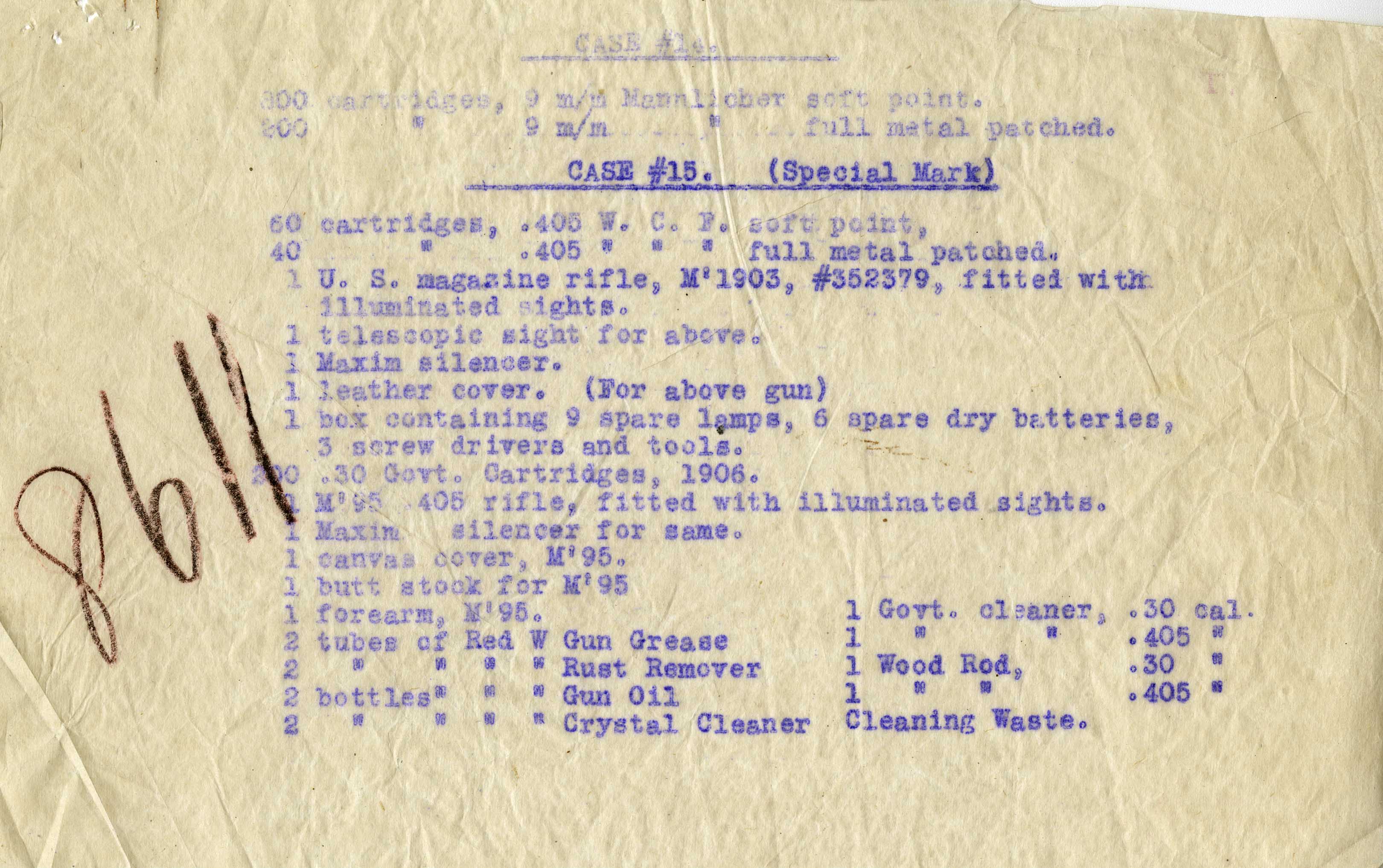 One of the pages from Teddy Roosevelt’s packing list. Image via Cody Firearms Museum.

Hunting was a major part of what Teddy Roosevelt called his “strenuous life” philosophy, and the 26th president appears to have taken every opportunity to pursue his passion, whether for big game in North Dakota, mountain lions in Arizona, and most famously, white rhino in Africa.

He took his African safari immediately after his second term as president in 1909 and worked with the Smithsonian Institution to make sure the animals he killed would be displayed for the public and used for scientific research. One of his white rhinos is still on display in the Smithsonian’s Hall of Mammals at on the National Museum of Natural History.

One of his rifles sounds more like something from 2021 than 1909. Roosevelt, who was a known Winchester fan, brought a .405 Winchester Model 1895 fitted with “illuminated sights” and a Maxim silencer. The Maxim was patented the same year Roosevelt took the expedition, but as the former president, he no doubt had access to all the latest in firearms technology.

The expedition was a success: Roosevelt killed 296 animals, including five northern white rhinos, according to Smithsonian Magazine.

If anyone can compete for the title of America’s Most Famous Hunter, it’s Ernest Hemingway. Though he had lots of experience hunting stateside, he, like Roosevelt, is best-known for his African adventures.

The “Big Five” African game animals require large-caliber firearms, and Hemingway’s “battery” (the guns he brought on his safaris) consisted of a variety of high-powered rifles and shotguns. Of the latter category, Hemingway preferred a single-barreled 12 gauge Winchester Model 12 repeater, which he took with him on both safaris, according to Silvio Calabi in “Hemingway and Africa.”

The Model 12 can hold five shells in the magazine, and it’s among the most famous shotguns ever produced. This gun was “well loved” and “worn smooth,” as Hemingway describes it in his non-fiction novel, "Under Kilimanjaro": “[The] pump gun that was faster than a snake and was, from thirty-five years of us being together, almost as close a friend and companion with secrets shared and triumphs and disasters not revealed as the other friend a man has all his life.”

Though Hemingway carried along the requisite “big guns” (double-barreled rifles chambered in monster cartridges like the .470 Nitro Express), his favorite rifle was the G&H Springfield .30-06. The rifle was a modified version of the American bolt-action 1903 military rifle, according to Calabi, and Hemingway used it both in Africa and in the American West. 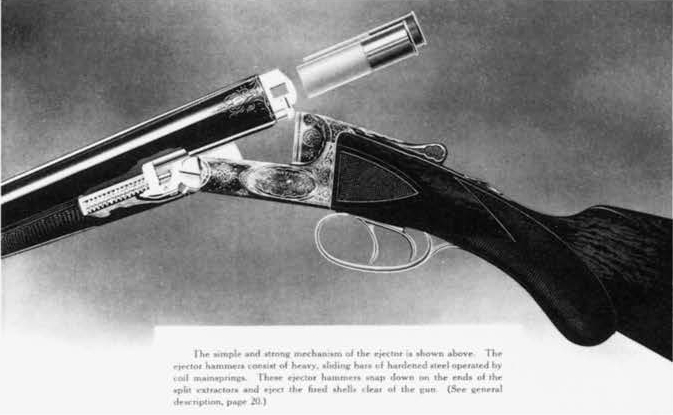 Aldo Leopold is known more for his ecological philosophy than for his skill as a hunter, but his experience hunting quail, deer, grouse, partridge, dove, and waterfowl rivals that of most modern-day outdoorspeople.

Leopold was a “crack shot,” according to biographer Curt Meine, and he kept hunting journals from 1917 until his death in 1948. He appears to have favored wing shooting over large game hunting, and the only specific firearm Meine mentions is a “beautifully engraved, .20-gauge, double-barrelled Ainsley-Fox [sic] that cost the princely sum of three hundred dollars.” Leopold “indulged” in the purchase in 1921, and he used it that year to target goose during a week-long canoe trip down the Rio Grande.

While Leopold was “well-content” with his trip, his wife was less enthused about his recent purchase: “Three hundred dollars,” she reportedly said, “...and I needed a washing machine.”

Leopold was a well-known hunter and self-proclaimed “gun enthusiast,” but he wasn’t afraid to speak out in defense of wildlife and urge the pro-gun lobby to adopt positions consistent with good ecology. After an author in the National Rifle Association magazine, Rifleman, lauded eagle shooting in Alaska as “the purest of all rifle sports,” Leopold sent a letter to NRA president Karl T. Frederick:

“We gun enthusiasts are constantly complaining of restrictive legislation on firearms,” he said, "Is it likely that the public is going to accord us any more respect and consideration than we earn by our actions and attitudes? I would infinitely rather that [the author] shoot the vases off my mantelpiece than the eagles out of my Alaska. I have a part ownership in both.”

Last Shot Any bona fide hunter will tell you that a firearm is one of the least important elements of a successful hunt. Understanding an animal’s habits, movements, and environment; reading the wind, getting in position, and staying calm are more important (and often more difficult) than selecting the right firearm.

Still, it’s hard to separate famous hunters from their famous long guns, and these firearms helped earn Boone, Cody, Roosevelt, Hemingway, and Leopold a place in the pantheon of American outdoorsmen.

The 6 Most Expensive Guns in the World

There are rare guns and historical guns, but then there are firearms so one-of-a-kind with such amazing stories behind them that they’re nearly priceless. Note the “nearly.” At auction, these ultra-rare firearms have fetched prices from $860,000 to almost $2 million. These guns can command such prices because of their rarity and condition, like most valuable collectibles. But the most expensive carry eye-watering price tags because of their...

The 5 Guns Every Hunter Should Own

We know you already have a list in mind. This is how we came up with ours. Coverage is the name of the game. These five firearms allow hunters to pursue everything from wingshooting to small game to big game. The calibers we chose are relatively common and inexpensive, but also panic-proof. If you’ve visited a sporting goods store lately, you know it’s a good idea to have guns not chambered in any of the common self-defense calibers. With all...