An Ode to Department Store Guns

It’s hard to believe today, and even harder to explain to someone under the age of 50, that there was once a time when firearms were regarded as sporting goods by major retailers. They were basically treated like baseball bats or golf clubs—selling in huge department stores that appealed to the broadest customer base possible. (You might also struggle to explain what a department store was.)

In this new era of e-commerce, the very concept of the department store has almost faded into history. The few that remain are only shadows of what they once were—and the fact that they not only sold firearms but even their own store-specific models sounds totally alien to younger hunters. When you think of buying a new shotgun, the place in the mall where parents take kids to buy an awkward-fitting jacket for the spring formal isn’t the first place that comes to mind.

Somewhere between the 1970s and 2010s, department stores, once the monoliths of retail, became anchors for even larger shopping malls. Those too have been gradually replaced by big box retailers and online shopping. Today the few brick-and-mortar department stores are on their last legs, with some likely dealt a death blow by the COVID-19 pandemic. Over the past decade Americans have seen those newer retail giants greatly reduce or completely eliminate their gun counters, often amidst controversy, relegating firearm sales to outdoor-focused big box stores and dedicated gun shops.

Department stores and the early discount “big box stores,” like K-Mart and Best, made reliable but affordable firearms available to the working class. My father bought his first side-by-side 12-gauge Savage deer gun—the same gun I carried on my first hunting trip—at the local K-Mart. It even came with a free leather case.

Gun counters were a staple at budget general stores like those for decades, but the guns sold by monstrous department stores were a bit of a different breed. 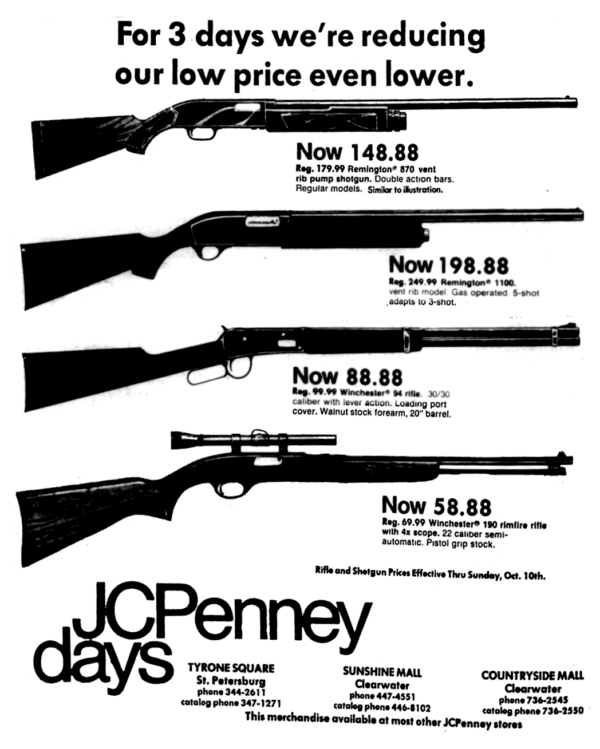 Department Store House Brand Guns
Here’s how it worked for those who don’t remember. Now, keep in mind that before 1968, Federal Firearms Licenses weren’t a thing. Pretty much any retailer could sell guns and ammunition, from tiny hardware stores to the biggest retailers in the world.

Department stores were like a bunch of small stores packed under one roof, with each department selling different products: men’s clothing, women’s clothing, hardware, home goods, sporting goods. Think of a department store as the main drop-down menu on Amazon.com, or as a larger, more clearly defined Walmart. A department store was able to keep prices relatively low, compared to a specialty store, and offer a consistent level of quality across a wide breadth of products. They also featured in-house brands across all categories that were generally more affordable than brand name items—think of these as Amazon Basics products.

For most of the 20th century, firearms, especially shotguns and rifles, were sold alongside other sports equipment and outdoor gear. For better brand recognition, instead of having Winchester rifles and Savage shotguns on their gun racks, larger department stores would sell proprietary “store brand” firearms. In actuality, these guns were still manufactured by major gunmakers, but they were relabeled with proprietary brand names and model designations.

One of the largest and most fondly remembered department store gun retailers was Sears, Robuck and Co., which was originally founded in 1892 as a mail order catalog. The legendary Sears Catalog brought products, including firearms, once only available for purchase in stores on the coasts to anyone with a mailing address. The company began opening retail locations in 1925 and by 1970 it was the largest retailer in the entire world, headquartered in the tallest building in the world (at the time): The Sears Tower in Chicago.

The company sold a whole lot of guns under about 18 proprietary store brand names over the years, like American Bar Lock, Berkshire, Ted Williams, Triumph, New England Arms, and others.

One of Sears’ most popular firearm brands was part of its sporting goods brand, J.C. Higgins, which was named after a former company vice president and included everything from bicycles to golf clubs to shotguns. The products had a reputation for being solidly built and priced for rural and working-class customers. Eventually Sears retired “J.C. Higgins” and rebranded the product lines more appropriately as “Ted Williams Edition” products, including firearms, after the company reached an extensive deal with the legendary baseball player and avid outdoorsman.

Sears wasn’t the only department store that did this. Once upon a time, you could buy a Model 6660 rifle from J.C. Penney, and you were getting a Marlin 99C. If you bought one of their Model 6870 rifles, you were getting a Savage Model 30.

Retailers like Woolworths, Cotter & Company (which later became True Value), Gamble-Skogmo, Montgomery Ward, and Western Auto, in addition to the aforementioned Sears and J.C. Penney, all sold guns under proprietary brands, either in stores or via catalogs. The “store brand” guns from Western Auto were labeled with the brand name “Revelation,” and were made by Savage, Marlin, and Mossberg. They were the most basic, no frills models with plain birch or walnut stocks, but the finishes were great, the features worked, and the guns were reliable. 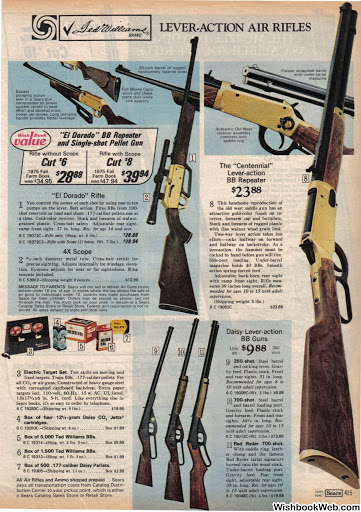 Store Brand Guns Today
When they were new and competing against the “name brand” versions, these store brand guns were less valuable and seen as lower grade budget guns. Now, most of these models are considered as valuable as their name brand counterparts, some more so to certain collectors.

Today, closed or aging department stores still clinging to the sides of floundering shopping malls are echos of a pre-digital time when people shopped in person. The guns those once-ubiquitous retailers once branded and sold are representative of an age not so long ago when Americans thought differently about firearms in a general sense.

The Sears Tower is now known as The Willis Tower, and the company that once occupied it and employed 350,000 people only has a few dozen stores left—and they’re owned by K-Mart. Things have certainly changed, but I still love that damn Savage 12-gauge my dad bought between the cosmetics and automotive section decades ago.

The Guns of the American Mountain Man

John Colter wasn’t about to lose his gun. The now-famous mountain man was travelling on the Lewis and Clark Expedition in May of 1806 when his horse slipped and fell during a difficult, deep-snow trek over the Bitterroot Mountains in the Idaho panhandle. Man and horse fell into a stream, where they were washed for a “considerable distance” by the icy, rushing water, according to historian Burton Harris. Colter sustained no serious injuries, but...

These ain’t your granddaddy’s air rifles. They’ll still shoot your eye out, but they’re also dead accurate and powerful enough to lay down a squirrel with a single shot every time. They’re quiet, cheap to shoot, and easy to use. If you’re thinking about exploring the small game woods this year, you should know that air rifle technology has advanced enough to rival any rimfire rig. A kid with a pellet gun is a menace to small woodland creatures...

Movie Guns that Made Their Characters

A firearm, when paired with the right character and actor, can become more iconic than the movie itself. Sometimes it’s a happy accident, sometimes it’s a carefully considered plan, but when it clicks, pop culture doesn’t forget. The character and gun become inseparable. These are some of the most iconic guns to ever grace the big screen. “Dirty Harry” Callahan | Smith & Wesson Model 29 Revolver What would Dirty Harry be without his hand cannon...