Editor’s note: If you’re new to our DIY Deer Hunter Profile series, here’s the scoop. In each of these pieces, Andy May, a DIY whitetail specialist himself (listen to him on Ep #162 of the podcast), hand picks and interviews the best DIY deer hunters from across the country to help us better understand how they do what they do. After reading today’s profile, be sure to CLICK HERE to see the other hunters Andy has profiled. – MK

Travis Murray is a true master of the bow.  He has quietly been piling up large bucks down south for many years.  Travis is a super humble hunter, but he was kind enough to share a few words and some pictures of his trophies.  He’s as dedicated as they come and chooses to hunt these rare, big southern whitetails the hard way, with traditional gear and from the ground. Read on and enjoy.

Q:  Tell me a little bit about your hunting journey. How did it begin and where is it now?

A: My hunting journey began at about age 5 tagging along with my grandfather and family elders. This was early 70s and was the era of dog hunting, shotguns and 742 Woodsmaster Remington rifles. Almost no one bow hunted at that time. Deer hunting was very social and landowners were very tolerant. We were able to hunt all over. 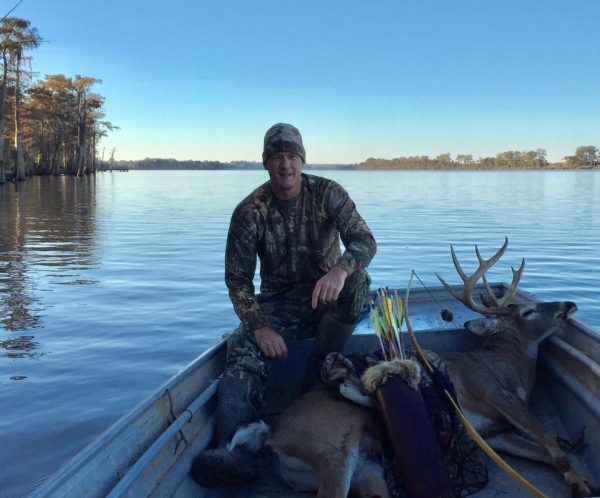 Q: Tell me about some of the places you hunt.  I recently visited Louisiana and it appeared to be incredibly unique and a challenge to hunt.

Q: I’ve heard rumors of countless big bucks you have taken. How have you been able to achieve such consistent success?

A: My success with big bucks really boils down to one thing, countless hours in the woods and the lessons learned from it. There is no replacement for woodsmanship and it can only be bought with effort and many hours in the woods over many years. 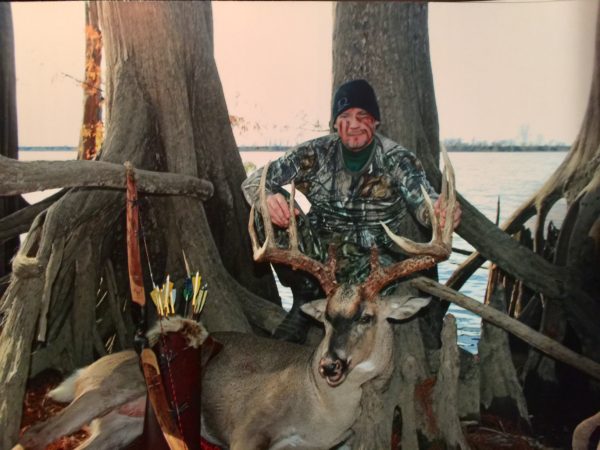 Q:  What has been your most effective hunting tactic for mature bucks?

A: I did not kill a mature buck until well into my teens, and it was just luck. I began to go after mature deer seriously after that. The first technique I used was to take climbing gear and go to the top of pine trees on the edges of clear-cuts with a 25.06. I killed several nice bucks this way. This was before game cameras and many other modern gadgets. I always bow hunted during this time with good success, but never took mature bucks. In the late 80s I began to really try for mature bucks with a bow and hunted all year with bows only (traditional and compound). The learning curve was steep and I went several years without even killing a deer. Eventually, through trial and error, I gave up on tree stands and focused on ground blinds on the edges of bedding areas. I soon took my best buck to that date, a 150 class 11 point from a ground blind. This was with a compound. This, over the years morphed into the traditional bows and ghillie suits I use today, although I still use natural ground blinds quite a bit. The common theme is hunting the edges of bedding areas. I never hunt food plots or food sources.

Q: What time of the season has been most productive for you?

A: Usually pre rut through the rut. Most of my mature buck kills have been late December through middle of January. 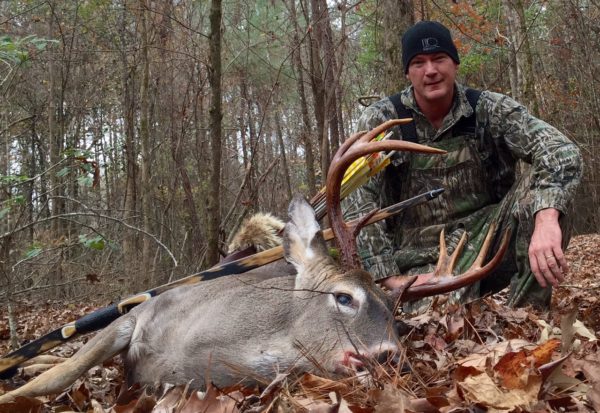 Q: What are the main reasons you are able to succeed at such a high level in an area where so many struggle?

A: Time in woods and access to lots of very good property. I’m in real estate and have access to some of the best hunting properties in the state. I also spend more time in the woods in one season than most hunters do in 10 years. The way I hunt lends itself to getting way back in thick swamps that have very little pressure. Many of my best spots are only reachable by boat.

Q: Tell me a little about your traditional archery journey.  Why did you switch to traditional gear?  Do you shoot instinctive or gap?  Do you feel this is an advantage or disadvantage for hunting?

A: I never switched to traditional archery, it’s where I began. I was enthralled by bows at a very young age. As a young child, I would go straight to the sporting goods section and drool over the bows. I begged for one for a couple of years and at 9 years old, my grandfather brought home 60s model Bear Cub recurve he had acquired in some horse trading at work. Greatest gift I’ve ever gotten and changed my hunting career forever.

I hunted with it for the several years, taking no deer, but much ridicule and laughter from the rest of my family. My grandfather always supported me, despite having no interest in archery himself. Two events changed me forever. The first was meeting and talking with Fred Bear at an outdoor show. It was a different time and there really were no outdoor celebrities. My parent did not even know who he was but I did! He spent awhile with me and several other youngsters giving us tips and shooting pointers. I did not even know he was going to be there, but it was a life changing encounter. 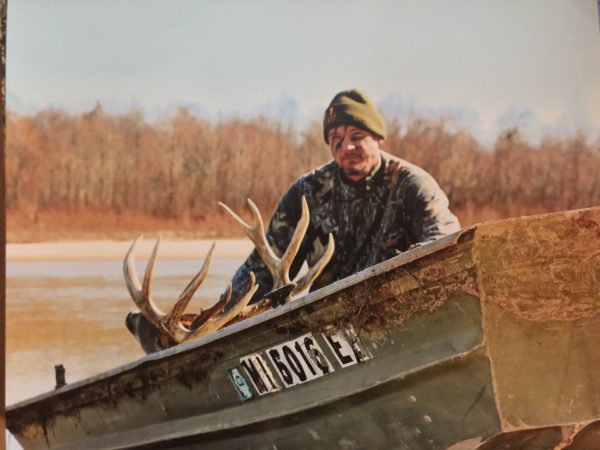 The second was after that, at age 14. It was early season and hot. I took my beloved recurve to a tiny little forgotten finger of soybean field not very visible from the rest of the field. Several deer appeared in the waist high beans very early that evening, but way out of range. One was a fat little 7point with some raggedy velvet still on his antlers. He was picking his way across the beans. There was a small, damp spot about 50 yards out where the beans were stunted and only about a foot high. The buck was headed for that spot.  It was a spur of the moment decision, but I got on my hands and knees and crawled in the high beans to the edge of that spot. I nervously eased the last few feet to where I could see the 20 or so yards across the damp spot. I was sure I had scared all the deer out of field, but I sat there.

About 10 minutes later, I could hear something working its way through the beans, very close. He stepped into the clear at about 10 yards. I was so nervous! He looked the other way and I drew and shot quickly. It was a poor shot as the string hit my arm and arrow flew horribly. The close distance saved me though as I watched the arrow with its green Bear razorhead sink into his midsection. I jumped up and watched him bound out of the field. I was so excited; it was several seconds before I noticed the massive 10 point watching me from about 100 yards away. He promptly disappeared back into the woods.

There was no regret; I was so excited about that 7 point. I knew it was a poor, but fatal hit. It was still early evening and dark was hours away. I sat for a nervous hour, then went to where he disappeared into the woods, and there he was about 30 yards into the woods. That still remains the greatest hunting memory of my life. 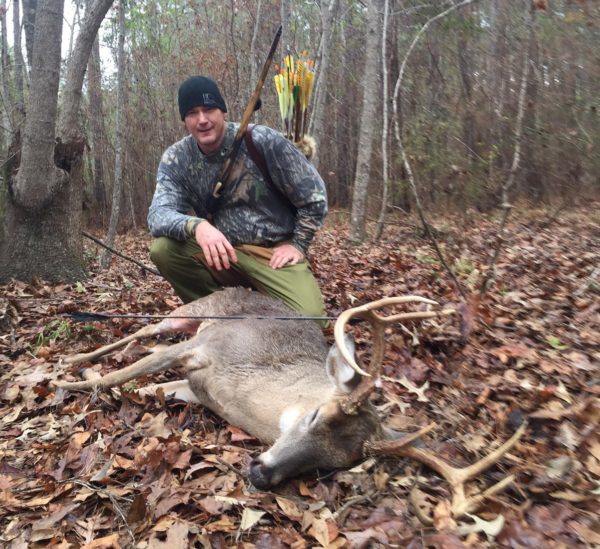 Q: What percentage of your mature bucks were killed on the first 1-2 sits in that location?

A: Other than two occasions that I got them first sit, I can’t ever remember killing a mature buck in the first couple of sits on a hunt. It usually takes a while. I’m also very mobile and may have multiple sets and approaches for different wind directions.

Q: Are there any pieces of equipment that you rely on for consistent success?

A: The only equipment I currently use is traditional bows and ghillie suits. I strictly use smoke for scent control. Many of my biggest bucks were killed with compounds( I love all bows, just love traditional bows more). At one time, I used game cameras extensively. Several years ago I quit compounds totally as well as game cameras and went back to my first love, traditional bows, mostly longbows, although my best traditional deer ever was with a recurve.

Shop All
Save this product
First Lite
Corrugate Foundry Pant
$195.00
"These are hands down the best hunting pants I have ever worn. That's the flat truth." - Steven Rinella
Save this product
Benchmade
Steep Country Knife
$162.00
A versatile fixed-blade capable of performing throughout any season, on any species.
Save this product
First Lite
Origin Hoody
$160.00
A lightweight, quiet mid-layer designed to be utilized as both an outerwear piece as well as a layering option as temperatures drop.
Save this product
FHF Gear
Bino Harness PRO-M
$125.00
Made with high-quality, durable Cordura, the FHF Gear Bino Harness is designed to be quiet, lightweight, low profile, modular, and easily operated with one hand.
Get the latest in your inbox
Subscribe to our newsletters to receive regular emails with hand-picked content, gear recommendations, and special deals.
Our picks for the week's best content and gear
For the whitetail obsessed, with Mark Kenyon
Redefining our connection to food, with Danielle Prewett
Your one-stop for everything waterfowl, with Sean Weaver
Get out on the water with the MeatEater Fishing crew
Technical hunting apparel
Purpose-built accessories for hunting and fishing
Quality elk, turkey, waterfowl, and deer calls
Privacy Policy

DIY Deer Hunter Profile: Andy May (Part One of Two)

Here on Wired To Hunt, Andy May owns the idea of assembling this great list of DIY hunter profiles. However, Andy neglected to include himself. It was my idea, not Andy’s, to make him part of the DIY series. This is the main reason I respect him. Andy stays humble. Without prompting, Andy wouldn’t have written a self-profile in a million years. Don’t mistake his clear statements for any trace of arrogance. That decisiveness is part of his skill...

Hunting Mature Bucks During The Rut with Greg Miller

By Alex Comstock THE. RUT. Those two words trigger thoughts of sheer happiness and dreams filled with big bucks for deer hunters. For most people, it’s their super bowl, and the time of the year we look forward to the most. With that in mind, I wanted to reach out to somebody who’s garnered success during the rut over the years to see what we could learn. Greg Miller is someone who has been hunting mature bucks for a long time and I thought he’d...

There is nothing quite like seeing a big mule deer buck skylined on a distant ridge. Naturally, many whitetail deer hunters choose this iconic Western big game animal for an out-of-state hunt. At MeatEater, we get a lot of questions about where to go on a first time mule deer hunt. Fortunately, there are plenty of options. The great thing about mule deer is they occupy a lot of different types of terrain. With a little research, most hunters can...