Cheating is everywhere. A quick flip through the pages of a newspaper or scrolling through newsfeeds on your phone makes this quite clear. Most of us can recall scandals in football, basketball, and even chess in the not-so-recent past. The much less popular sport of walleye fishing has now taken its turn at the plate. While many people don’t realize that walleye tournaments are even a thing, this type of behavior has been going on much longer than anyone reading this has been walking or talking.

More than 20 years ago in one of my first tournaments, a few fellow participants couldn’t believe that a young snot-nosed kid could have amassed such a big bag of walleye, so they accused me of cheating. Interestingly enough they admitted to pooling their fish together and adding ice to the fish’s bellies for added weight. Both violations individually enough to get them thrown out. Admitting to cheating to accuse someone else of cheating is ironic by epic proportions.

The simple fact is that cheating has been going on for a long time, and isn’t likely to end anytime soon unless maybe waterboarding or forfeiture of your house somehow becomes acceptable repercussions in the fishing derby circles. 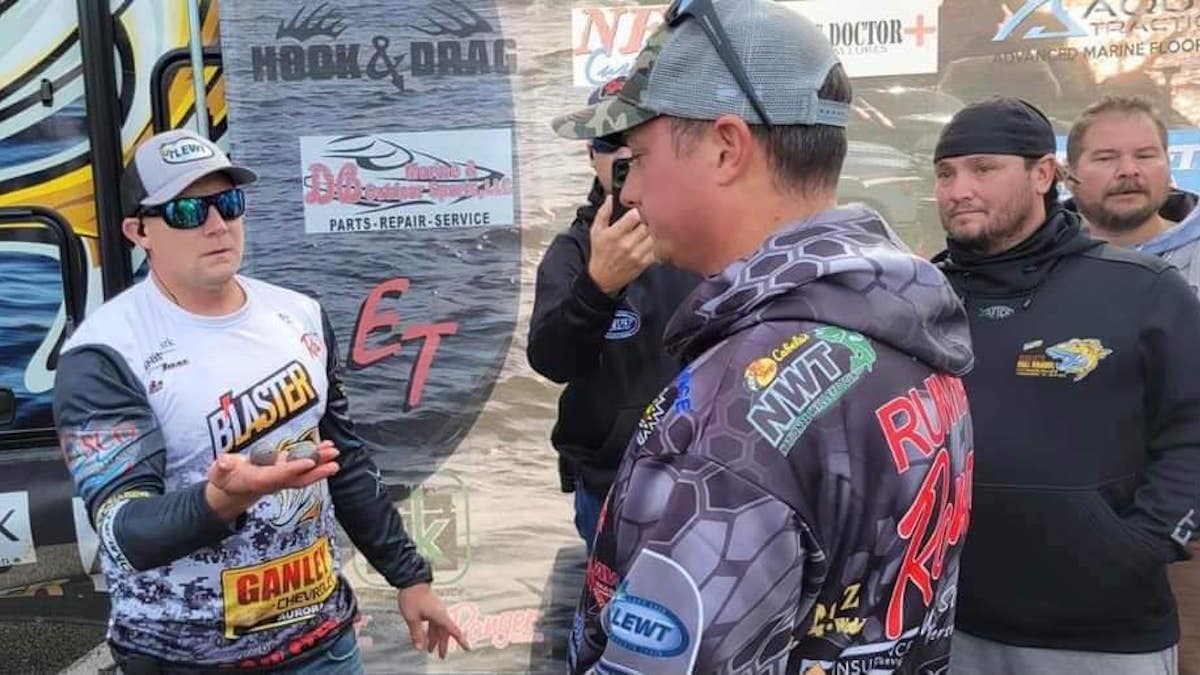 What Went Down in Ohio

All of this brings us to last week when two Ohio walleye anglers, Jacob Runyan and Chase Cominsky, made international news when they were busted cheating in a Lake Erie Walleye Trail event. They were caught because they placed at least 8 pounds of lead weights and partial fish fillets in the stomachs of fish that they weighed in.

The real story actually starts more than a year prior. This team—out of nowhere—started dominating walleye tournaments, like Tom Brady playing on Friday nights at your local high school.

Some of the smoke in this story came from fellow competitors not believing that the fish weighed what they did merely by just looking at them. While my mom can’t judge the weight of a walleye, guys like myself that handle them seven days a week become surprisingly accurate in gauging weight, even from a distance. As the tournament wins continued to amass so did the anger from fellow competitors. Early on many outsiders believed this might just be jealousy from the other competitors, but it came to a point where formal protests were being filed, and lie detectors were being required as a result of the almost perfect fishing performances.

During this year plus of fishing the smoke continued to build as videos, overheard conversations, and pictures surfaced creating doubt that something really just wasn’t right. But not enough hardcore proof was present, and the tournament directors had no choice but to present the prizes and cash to the alleged cheaters time after time. Things really came to a head when one of the alleged cheaters failed a lie detector in one of the fall big fish derbies, but the same angler passed the other circuit's lie detector. A brand new $100K+ boat was the prize in each event.

It is not uncommon for anglers to get on a “hot streak” just like we see in other sports, but this one was of epic proportions never seen before. Adding to the doubt was the fact that neither of these alleged cheaters was fishing larger national events that pay considerably more money. If on a streak of this magnitude, why would you fish for nickels when there are dollar bills to be had?

As these allegations and questionable circumstances continued to mount, so did the tension amongst the anglers. In an effort to maintain order on the Lake Erie Walleye Trail the tournament director even put a cameraman in the alleged cheater's boat in the event prior to last week's events. While it was said that several of the top boats would receive a cameraman to document the tournament, this was an action that had never been done before. On The Bigwater Podcast, the tournament director, Jason Fischer, admitted that it was also an attempt to have a 3rd party observer.

This brings us back to last week in Cleveland, Ohio for the final event of the Lake Erie Walleye Trail season which would determine both the tour’s Championship and the coveted “Angler of the Year” title. With different side pots, contingency dollars, and cash prizes, there was well over $20K on the table. With hurricane aftermath weather conditions, the two-day tournament was shortened to a one-day shoot-out in less than favorable conditions to determine both aforementioned titles.

Once dockside, several anglers hovered around waiting to see what the two alleged cheaters would have on such a tough day of fishing—tough enough that most didn’t even have a five-fish limit. When many of the anglers saw their fish, they didn’t think anything of it as they were of average size for Lake Erie at this time. The real drama started when the scale said 30-plus pounds.

This drew boos from the crowd and suspicion for the tournament director as he asked the alleged cheater to stay next to the stage for pictures. As Fischer viewed and ultimately grabbed the fish, he knew something wasn’t right and that further action was needed. A knife was produced and quickly lead weights, walleye fillet parts, and even a pair of scissors were found in the bellies. The jig was finally up. 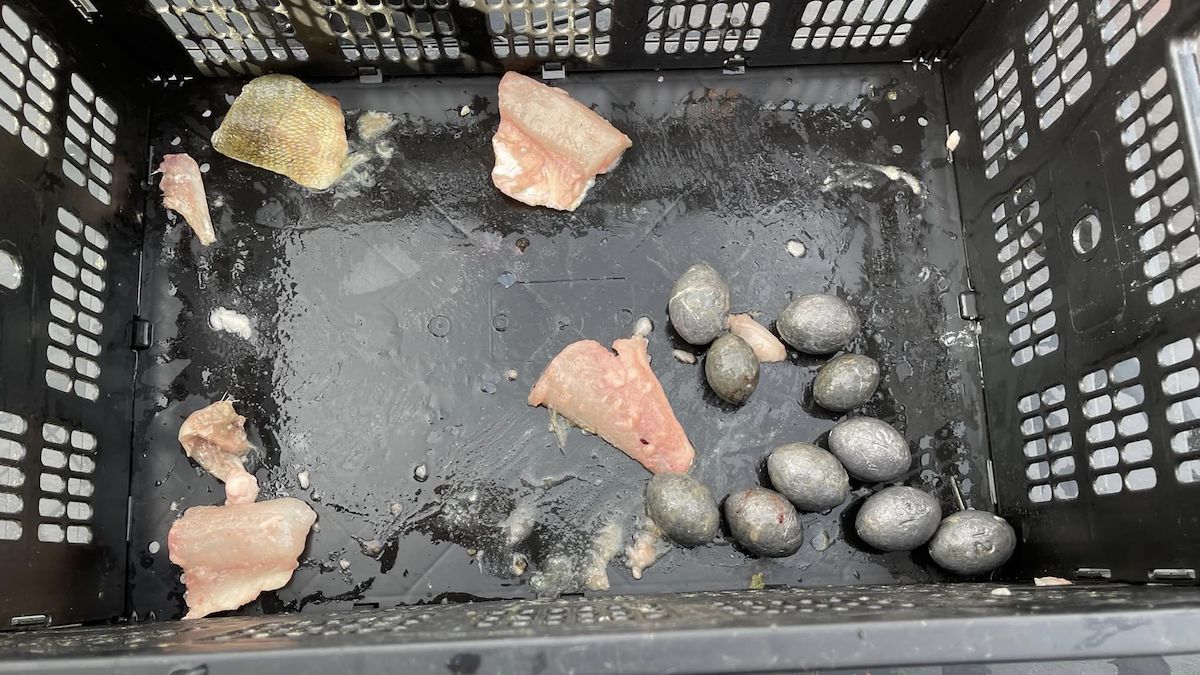 Looking to the Future

While it is easy to look at these events from a 20,000-foot ceiling or with hindsight being 20/20, not a lot could really have been done by the directors of these events given the circumstances and rules in place at the time. The fact is these anglers still have personal rights, and many of the suggested ideas or tactics would have violated them. Social media comments regarding the angler’s rights mostly boiled down to “who cares.” My guess is you would care if the roles were reversed.

As mentioned, cheating is nothing new. But I think having a video of an angry mob about to beat down two anglers after duck decoy weights are cut out of a fish and roll into the parking lot, you have the making of a good movie or at least a lot of drama for social media.

Countless comments centered around why not just have a metal detector present. Well, what if they were to put ice cubes or something nonmetallic in them next time? In reality that’s like saying you’re going to only take aspirin when you are sick regardless of the ailment. While aspirin works great for many things, it doesn’t work on many others. The same could be said for cheating in tournaments. Other methods that have been tried include, pooling fish together with other anglers, hiding fish in cages, fishing out of bounds, using too many rods, and the list goes on.

The positive side of this black eye is that it brought a lot of attention to tournament fishing and as they say, “there is no such thing as bad PR.” Except for two anglers that used to fish the Lake Erie Walleye Trail I suppose. These two knuckleheads' tournament fishing careers are over.

Now, many more people are familiar with competitive walleye fishing and rules will be adjusted for the future. With hundreds of thousands of dollars at stake, this isn’t your grandpa’s fishing world any longer, nor the last cheating scandal it'll see.

I’d be lying if I said I didn’t like live bait. In today’s day and age, however, you would have to crazy to not have a good sampling of soft plastic lures in your walleye boxes. Plastics open a diverse set of options when compared to live bait. We will forgo the obvious holdups that live bait can be expensive, difficult to keep alive, let alone challenging to keep on a hook, and instead focus on why plastics deserve a place in your arsenal of...

How to Catch Fall Walleye

Cool nights, football games, and long pants usually mean the start of prime walleye fishing in most parts of the walleye world. As the waters cool, these fish know to strap on the feedbag in order to help eggs develop or put on some extra fluff to get through the winter slowdown. It’s at this time that they get a little easier to catch and a whole lot bigger when you do. Fall is my favorite time to chase my favorite fish. Here are three ways to...

How to Catch Walleye in Rivers

As the days grow short and the first frosts of the season sparkle gently in the early morning sun, we’re all faced with that all-important task of filling the freezer. For many of us this means pulling out the heavy gear to ply the rivers for autumn runs of giant trout and salmon or putting the fishing gear away and getting the deer rifle out of the gun cabinet. Yet many of us are missing out on an underutilized angling and meat gathering...