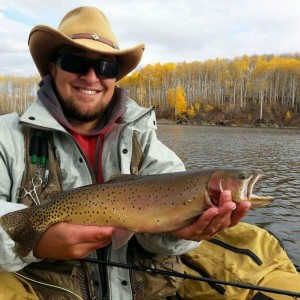 A monstrous splash disrupted the otherwise predictable rumble of the river. I turned from the water in front of me to where I thought my buddy Chris stood a hundred yards away.

I couldn’t see squat. It was a little after 2 a.m and raining just enough to be annoying. Chris and I had driven from Idaho Falls to the Missouri River in Montana, stopping at the Henry’s Fork and Beaverhead rivers along the way. We’d chewed up enough miles to wear me out, but I was the youngest guy on the water by at least a decade. If Chris was exhausted too, he didn’t act like it.

Then the unmistakable whine of a fly reel’s drag swirled into general cacophony, and I forgot all about being tired, cold and hungry. I stumbled down the bank in pitch-black darkness, hoping I’d remember where I’d left my fly rod.

Chris and our mutual friend Bryan stood together beneath the eerie red glow of their head lamps. I clicked my red light on, cursing for not remembering it while tripping down the bank.

“You see it yet?” I asked Bryan. Chris was busy trying to keep the fish out of the main current, which roared past at a leader-breaking speed.

He shook his head. “Nope, just heard the huge splash and Chris hooked up.”

We turned our red lights to Chris and tried not to get in his way while he muscled the fish closer. His 8-weight was bent in half, the line so tight it sang under the pressure.

Then, with a crack like a .22 LR, the line snapped. Chris stumbled back, thrown off-balance by the sudden change in pressure. On the edge of the dim glow cast by our red head lamps, his line fluttered in soft breeze.

A huge grin split his face while he dug into his pack in search of another fly. “The big boys are out tonight!” he yelled.

I glanced at Bryan. His expression mirrored Chris’. Obviously, I was missing something. Greeting a lost fish with jubilation isn’t something I run into every day.

It turns out, when throwing giant mouse flies for big trout, you have to learn to celebrate each small victory. Hooking up with a fish is, by all accounts, the most difficult part of using these giant topwater flies.

That trip was my first exposure to both fly fishing at night, and fishing topwater lures for trout. For three days, Chris, Bryan and I fished different stretches of the Missouri from 11 p.m. to dawn in search of giant, mouse-eating trout. I didn’t net any trout—just a 13-inch walleye that smacked a streamer like it owed it money—but half the time I just sat back and watched.

Bryan and Chris have been doing this for years. Getting a front-row seat to their crazy—albeit effective—methods was one of the best learning experiences I’ve had as an angler. Most importantly, it forced me to realize just how effective topwater fishing for trout can be.

I’m used to throwing poppers, floating minnows, buzz baits, swim baits and frogs for bass, but it wasn’t until this trip with Chris and Bryan that I started to see the potential efficacy these topwater bass lures for trout. If trout will come up for mice, why wouldn’t they come up for any given topwater lure?

Over the past two years fishing topwater on both fly and conventional gear, I’ve discovered trout will in fact come up for large surface presentations. The trick is in knowing which lures to use, and when and where to use them.

Which Baits?
Aside from dry flies (which include large terrestrial insects like hoppers and beetles), it’s generally assumed that when a trout goes after something big on the surface, they’re chasing mice, shrews or voles. I’ve heard stories of trout eating ducklings and other small birds of the surface, but the tales all have the feel of an urban, or maybe rural, legend.

Trout do eat mice, though—we know that for certain, thanks to some fascinating studies by The Nature Conservancy. But will they feed on any other big-ticket meal items?

MeatEater’s Fishing Editor Sam Lungren and I discussed this topic, with Sam telling me that he thinks trout come up for frogs and other amphibians, too.

“The frog thing is mostly a hunch I have,” Lungren said. “Some logic behind it though—frogs are generally more likely to jump in the water on purpose, and I’ve done my best mousing in kinda froggy areas—slower water adjacent to swamps and such. Again, just a hunch though.”

This isn’t the first I’ve heard of trout eating frogs but, given frogs’ amphibious nature, I have to think a struggling mouse is an easier target for hungry trout. Regardless, fishing any kind of mouse or frog imitation can induce those thundering takes that make topwater fishing so damn fun.

I’m an equal-opportunity-angler. I fly fish most of the time, but I have a collection of spinning and casting rods and love trolling for big lake trout and kokanee salmon on Flaming Gorge Reservoir here in Utah. I’ll often fish big jigs off the end of my fly rod. And on the occasion I take young kids fishing a fly behind a bubble on the ol’ Ugly Stik is tons of fun.

Whether you’re fishing fly or conventional gear, there’s not much difference in how you fish topwater lures for trout.

Find the Water
First, you need to find the right water. Mice tend to fall off banks and ledges, within a foot or so of the shore. Fishing a mouse in the middle of the river isn’t usually productive since trout aren’t looking for mice out in that heavy current.

Frogs are generally in, well, frog water. That’s a common term among anglers for dead, swampy water with lots of foam and no current.

Nail the Presentation
While topwater lacks the finesse of delicate dry-fly presentations, there’s still technique to it.

Throw mice upstream, tight against the bank. Use a quick, downstream retrieve. I also recommend throwing mice to the opposite bank, swinging them across the current, then jerking them upstream fairly quickly. Some anglers suggest fishing mice slow, but every mouse I’ve seen in a river is swimming like hell to get out.

For frogs, throwing the lure into dead water and slowly working it with long, rhythmic is your best bet. Frogs can theoretically be found further out from the banks than mice, but you still want to fish them with a sense of reality. Frogs won’t just magically appear in a seam in the middle of a wide river, and trout will spook more often than not after a presentation like that.

The Perfect the Hookset
Since most mouse fishing takes place mostly at night, you’re doing almost all of your work by touch and sound. Almost all missed hooksets on topwater are due to setting the hook early. So, when you’re night fishing for trout, listen for the splash first. You’ll hear a big commotion, I promise. Then, pay the utmost attention to your line. The minute you feel any weight, set that hook. Above all, don’t stop your retrieve just because you hear a splash. Trout often miss a topwater lure on the first strike, or they’re hitting it once to “stun” the meal before circling back for the death blow.

Fishing topwater lures for trout is something completely different than what most anglers are used to. Even though Chris lost that big fish our first night on the Missouri, the memory of it kept us all pushing forward. Eventually, that persistence paid off. I was asleep (I’m a lightweight with all-nighters) but someone shook me awake when Chris hooked up again.

We were fishing from Bryan’s boat, anchored up in an eddy somewhere on the Missouri River. Just like that first night, Chris’s rod was bent double, the drag screaming and the line singing.

This time, though, there wasn’t a crack like a .22 LR. Instead, the boat rocked from the thrashing of a fat, mean trout that wasn’t happy to have ended up in our net.

Trout ,
Get the latest in your inbox
Our picks for the week’s best hunting, fishing, wild foods, and conservation content.
Big bucks, land management, rut reports, and tips for the whitetail obsessed.
Privacy Policy

So, You Want to be a Fishing Guide? Part One: April’s Origins

This is the first installment in a five-part series outlining the experiences of working fishing...

This is the first installment in a five-part series outlining the experiences of working fishing...