The giant container ship “Ever Given” was stuck sideways in the Suez Canal for nearly a week, providing endless fodder for news outlets and meme creators. But the piscatorially-minded among us had only one question on our collective minds during this debacle: If we were stuck on a 1,300-foot-long boat run aground in the desert, could we at least catch fish while we wait?

Turns out the answer is “yes,” but that’s actually a problem of its own.

The canal across Egypt’s Isthmus of Suez, which divides the continents of Africa and Asia, was constructed between 1859 and 1869 to connect the Red Sea of the Indian Ocean to the Mediterranean and the Atlantic Ocean. The idea, executed by French diplomat Ferdinand de Lesseps, was to save ships nine days and a 5,500-mile journey around the treacherous Cape of Good Hope at the southern tip of Africa as they brought goods from India and China to markets in Europe. Today, an estimated $3 billion in cargo and oil float through the passage on container vessels every day.

The Taiwanese Ever Given, one of the largest ships on Earth, was allegedly blown off course by high winds as it transited the canal on the morning of March 23 and got stuck sideways in a segment of the waterway without any bypass channels. More than 450 other container ships were delayed as excavation crews and tugboats toiled to refloat the massive vessel, creating an estimated economic damage of about $1 billion.

Parting the Red Sea
Fully loaded, the Ever Given has a freeboard of 60 feet, putting the prospective angler/crewmember very high above the surface, but I’ve seen crazier fishing feats. And cranking a fish that far up the side of a ship wouldn’t be too darn difficult considering the size of most of the fish swimming the Suez.

A 2013 paper in the Israel Journal of Zoology reported five primary fish species that reside in the canal, though many other have crossed it in what’s known as the Lessepsian Migration. Those include the Red Sea goby (maximum 2 inches long) and the Arabian toothcarp (3 inches) originally from the Indian Ocean. From the other side come the Mediterranean killifish (2 inches), marbled goby (3 inches), and the lunker of the lot, the big-scale sand smelt at a whopping 7 inches long—a popular food fish going back centuries. 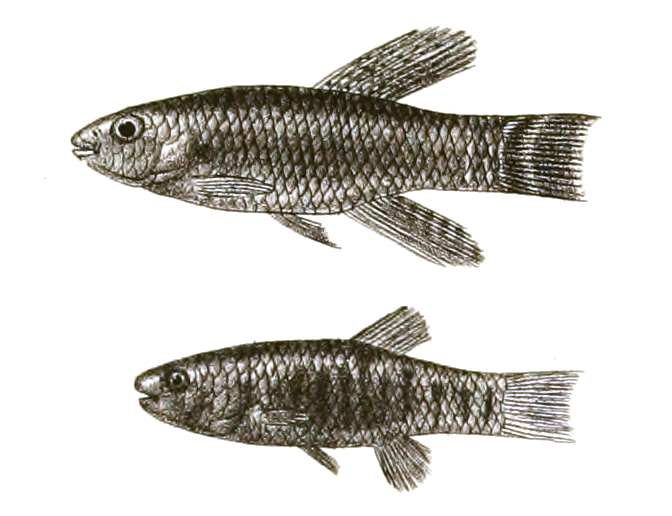 Arabian Toothcarp are common in the Suez Canal. Via WikiMedia Commons.

A Sinai the Times
However, fish populations and migrations may have increased substantially since the 2013 study. The Bitter Lakes, hypersaline waterbodies roughly halfway across the canal’s length, used to be far too salty for most fishes to cross. An expansion of the canal completed in 2015 diluted the Bitter Lakes and has allowed more species to transit. Researchers at the Smithsonian Tropical Research Institute estimate that some 400 non-native fish species have now entered in the Mediterranean via the Suez Canal. The Red Sea is slightly higher, saltier, and less nutrient-rich than the Mediterranean, making the invasion mostly one-way and the invaders more likely to succeed.

“More non-native species in the Mediterranean implies more chances for species to become established, some of which could become invasive and have dramatic impacts on ecosystems and on the societies that depend on them,” said study co-author Gustavo Castellanos-Galindo.

Many biologists and anglers worry that invasive Red Sea species may be driving some native Mediterranean Sea life toward extinction, according to a 2020 article by the Associated Press. The same aggressive, poisonous lionfish that plague Florida and the Gulf Coast have passed through the canal and established colonies off the coast of Israel, consuming native fishes as they go. Researchers may be even more concerned about the highly poisonous silver-cheeked toadfish. Toxic jellyfish endemic to the Indian Ocean have damaged power plants and threatened both beach visitors and tourism. Invasive limpets cover rocky coastlines and narrow-barred Spanish mackerel from the Red Sea are out-competing native meagre. Some of these species have already been detected as far away as Spain.

Bella Galil, a marine biologist at Tel Aviv University, told the AP that the widened Suez Canal acts as a “moving aquarium,” sluicing new species into the Mediterranean at a staggering rate—assertions that the Egyptian government, operator of the canal, disputes.

Some people involved with this issue have suggested that the brine leftover from desalination plants along the canal could be diverted into the Bitter Lakes in order to reestablish that salinity barrier and stem the flow of invasive fish, jellyfish, and crustaceans through the Suez. 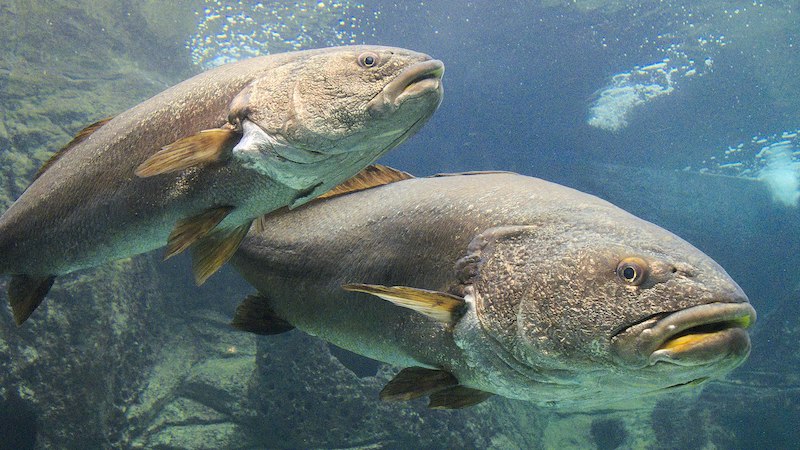 Meagre are declining in the Mediterranean but are being farmed in ponds along the Suez Canal. Image via C. Messier, WikiMedia Commons.

Fish like an Egyptian
Ecological destruction aside, as one of 25 sailors stranded on the Suez, you could conceivably connect with hundreds of different species ranging in size from 2-inch gobies to 50-inch king mackerel. Of course, you must first obtain an Egyptian fishing license.

Of note, in 2015 an Egyptian company began a massive aquaculture project in the sedimentation basins along the canal to raise shrimp, sea bass, sea bream, and meagre. They’ve since dug more than 4,541 individual ponds that are producing 80 million fingerlings and 500 million shrimp larvae annually, according to The Fish Site. Fish farms are notoriously leaky, so it’s more than possible that some of their crop will wind up in the canal. Meagre are similar to our redfish, which no one can refuse when it's cooked on the half-shell.

Thankfully, excavation and tugboat crews broke the Ever Given free on March 29, restoring global trade and likely providing respite for some restless and embarrassed crew members. But as the crew over here at MeatEater knows, you’re not really stuck if you’re having fun, and you can’t possibly be bored if there’s a rod in your hand with water nearby.

To catch more Fish News stories and more, listen to the Bent Podcast here or wherever you listen to podcasts. Don’t forget to subscribe!

Is it an elaborate courtship ritual? Is it unwanted bycatch? Do gnomes use monofilament or braid? Are mermaids even edible? Let your imagination run wild when you pull on this dazzling t-shirt.

Saltwater
Get the latest in your inbox
Subscribe to our newsletters to receive regular emails with hand-picked content, gear recommendations, and special deals.
Our picks for the week's best content
For the whitetail obsessed, with Mark Kenyon
With Joe Cermele and Crew
Technical apparel for the avid hunter
Purpose-built accessories for hunting and fishing
Quality elk, turkey, waterfowl, and deer calls
Privacy Policy

Why do we consider some fish iconic and others aquatic refuse? In this series, we focus on American fishes not officially designated as “game fish.” These species, though native, get lumped into a category of “trash fish,” a distinction that’s more than just semantic. Game fish are managed differently by state and federal agencies. They get protection, research, money, and love. Trash fish don’t. We think that’s wrong. Trash Fish Tuesday...

Bar Room Banter: The Biggest Fish in the World

There’s a difference between book smart and bar smart. You may not be book smart, but this series can make you seem educated and interesting from a barstool. So, belly up, pour yourself a glass of something good, and take mental notes as we look at the largest fish to ever swim the seas. We’re all about big fish stories here at MeatEater, and we recently came across the biggest one yet. At an estimated 70-plus-feet-long, Leedsichthys...

What’s the World’s Most Difficult Sportfish?

Muskie are the fish of ten thousand casts—or is that steelhead? Nothing really runs and jumps and straight-up brawls like a tarpon. Marlin are undoubtedly the marquee, among the largest and fastest, rare, unbelievably powerful, enigmatic. I’m sure we have ol’ Ernie Hemingway to thank for that perception, but it really just takes a lot of time and a mountain of money to catch “the lady in the blue dress.” Same goes for bluefin tuna. Yet there is...