Cooking and Eating Deer Heart For the First Time

Growing up, I ate a decent amount of venison – but for whatever reason, we never ate heart. With that being the case, when I started killing and processing deer for my own home, the heart was just something I never kept. I had no context for what to do with it or if it was even worth trying. But recently I was inspired to change that.

With hopes of finally trying one of the “wobbly bits” of a deer, this past week I killed a mature doe and saved the heart. A few days later, on New Years Eve, we prepared it as an appetizer. Here’s how we made it and what I ultimately thought of my first experience with heart. 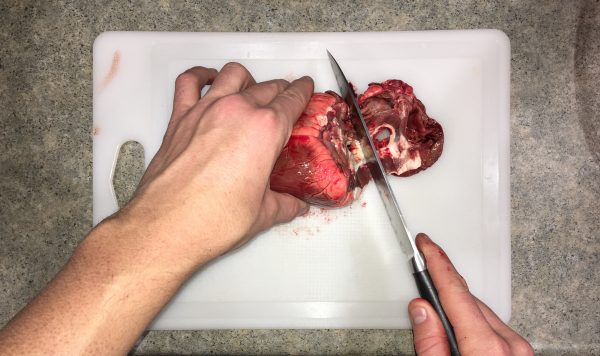 So the first thing I did was remove the heart from the deer when gutting her and place it in a ziploc bag. When I got home I put the bag in the refrigerator and it stayed there until the night before New Years. At this point I set about trimming the heart up in order to have it ready for a marinade. An article from Outdoor Life (CLICK HERE) with photos really helped me with this trimming process. In short, I just made a cut to open the heart up the middle and then removed all of the valves, flaps, cob-webby looking things and fat. In the end I was left with a couple slabs of meat that basically looked like steaks. 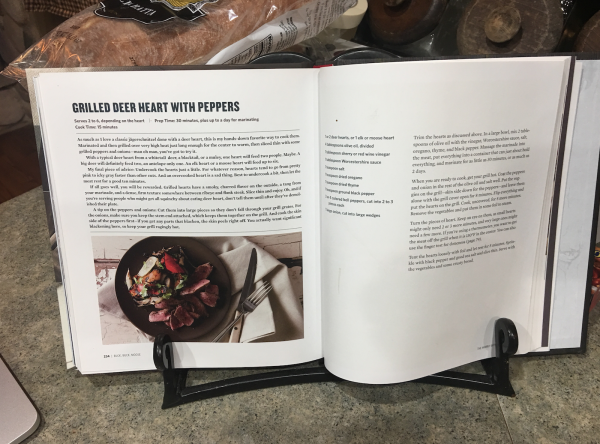 The plan was to try Hank Shaw’s “Grilled Deer Heart with Peppers” recipe, and that began with a simple marinade. So we took ingredients like red wine vinegar, olive oil and worcestershire sauce, mixed it all up in a bowl and poured it over my now trimmed heart “steaks” in a new ziploc bag. I then massaged the marinade into the meat and placed it back in the fridge for 24 hours.

Fast forward to the next night and I chopped up some red and green peppers, coated them with olive oil and salt and threw them on a raging hot grill. After those were nearly done, I put my heart steaks on and cooked them exactly as Hank instructs in his recipe instructions. 5 minutes on one side, 2 minutes on the other.

When the heart was done I removed the steaks and let them rest on a plate, tented with aluminum foil, for five minutes. While waiting on the meat, I re-toasted a small loaf of french bread in the oven and sliced a few thin pieces to pair with the peppers and heart. And finally, when the heart had rested the prescribed amount of time, I sliced one steak into small quarter inch thick pieces. 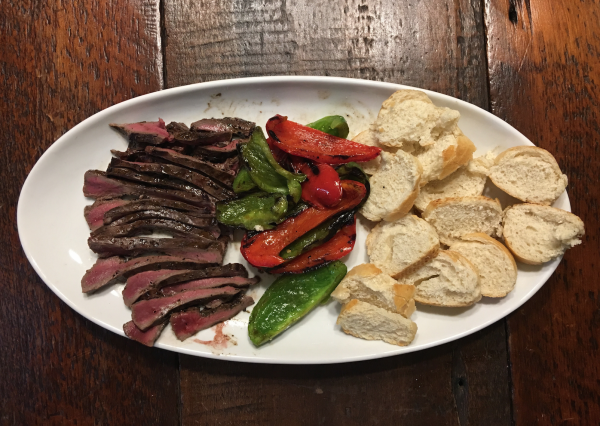 Finally it was the moment of truth. I grabbed a slice of heart, a piece of bell pepper, and some warm crusty bread. I tentatively shoved it in my mouth and chewed. My eyebrows raised in surprise, my lips curled up into a smile, I enthusiastically nodded my head. My wife just laughed.

It was damn good. I mean really really good. In all honesty, I had low expectations for this one. I hoped it would be bearable, but I didn’t think I’d love it. But I was wrong. The flavor, the texture, the pairing with the peppers and bread – it was all above and beyond my wildest dreams.

I had just prepped and grilled a deer heart and now I was thoroughly enjoying eating it. Realizing all of that felt pretty good.

The heart, in many ways, is more than just a cut of meat. It’s a symbol of life – the beating, pulsing, core of life. And eating this heart, in some small way, seemed like an act of reverence for the life that had been given for this meal.

A very tasty act of reverence.

How to Perfectly Cook a Venison Steak

Backstraps from elk, deer, and antelope are some of the most prized wild game cuts . Their tenderness and shape yields excellent steaks, and every hunter should  know how to properly handle them. Here’s how to get a juicy, perfectly seared venison steak every time. Butterflies, Medallions, or Filets? Everyone has their favorite way of turning a backstrap into steaks. But before you start breaking them down, take a moment to consider a couple of...

Casual anglers might struggle to gather sufficient organs for all the different preparations I’m covering in this series. My intention, really, is to show you that these organs are edible and encourage you to sample a few. If you find that you really like particular bits, you can do what I’ve done for a lot of this research, and source organs from a local fish monger. Really, though, I just hope that less of the fish you choose to harvest winds...