On Oct. 15, 21-year-old Brady Lowry and his Northwest College wrestling teammate Kendall Cummings were mauled by a grizzly while shed hunting near Cody, Wyoming. In an unusually gruesome double-attack, the beast sent both friends to the emergency room—Cummings by life-flight with horrific head injuries, and Lowry with a snapped arm and extensive lacerations.

The ill-fated day began as a shed-hunting expedition with two other teammates in the Shoshone National Forest. Towards the end of the day the group split up. Lowry and Cummings opted for a circuitous route back to their truck, at the time about four miles away, while their friends took a more direct line to the vehicle. 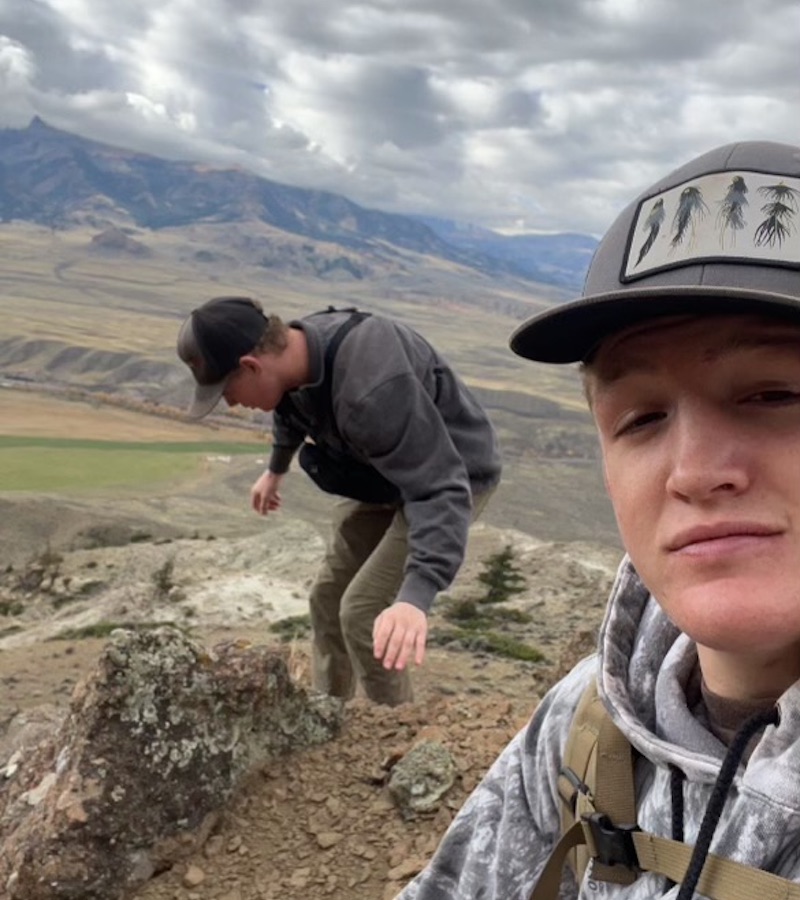 The pair soon found themselves in an area with particularly heavy grizzly sign. “We knew they were in there,” Lowry told MeatEater in a phone interview. “We’ve ran into them before, but nothing like this.” Unperturbed, the pair kept shed hunting. Minutes later, however, they stumbled onto several piles of steaming, fresh bear scat.

“‘Kendall, that’s a lot of fresh bear crap!’” Lowry recalled exclaiming to his friend, moments before a grizzly sow came crashing out of the bushes.

The bear tackled Lowry head-on, tossing him off a small rock outcropping and attacking his face. “I threw my arm up and it locked on,” Lowry said. “It kind of started throwing me around like a ragdoll, and I was just helpless. It snapped my arm in a couple spots.”

While in full-fledged survival mode at the time, Lowry was shocked in retrospect by the speed with which the attack occurred. Both Lowry and Cummings were packing bear spray and hollering back and forth to keep tabs on each other all afternoon, yet they still appeared to have startled the beast, which the Wyoming Game and Fish Department later said had cubs it was likely defending.

“I thought I would have time, and I could actually protect myself,” Lowry said about the initial attack. “It made me feel so little, so helpless. It was crazy.”

The bruin then began pawing at Lowry, biting his shoulders and chest, while Cummings watched the scene unfold from about 10 yards away, throwing rocks and yelling at the beast to no avail.

Cummings then jumped into action before the bear killed his friend. According to Lowry, Cummings grabbed the bear by its head and ripped it off—an audacious move that Lowry credits to their comradery as teammates and the ends to which they will go for one another. “We’re brothers, and we would go through hell and back for anyone on this team,” Lowry said.

While successful in his attempt to disengage the bear from Lowry, Cummings had now drawn the beast’s attention to himself. Lowry described what happened next: “I roll over and the bear’s staring at Kenny. And I don’t know how bad I’m hurt. I see blood everywhere.”

Cummings had a few-second head-start on the bear, but he was quickly overtaken by the pissed-off animal. The bear dragged Cummings into the timber, at which point Lowry, still in shock, began climbing a nearby hill to a spot he knew had cell reception. He called 911 and was able to wave down their two friends, Orrion Jackson and Gus (August Harrison), who were still nearby.

“The bear’s got Kendall. Kendall could be dead,” Lowry told them. Gus instantly took off up the hill, unarmed except for bear spray, in search of Cummings.

About four minutes later, Cummings reemerged from the timber. “He came walking out of the trees and he was just drenched in blood,” Lowry remembers. “It looked like his face was just ripped off. And it was just such a relief to see him.” 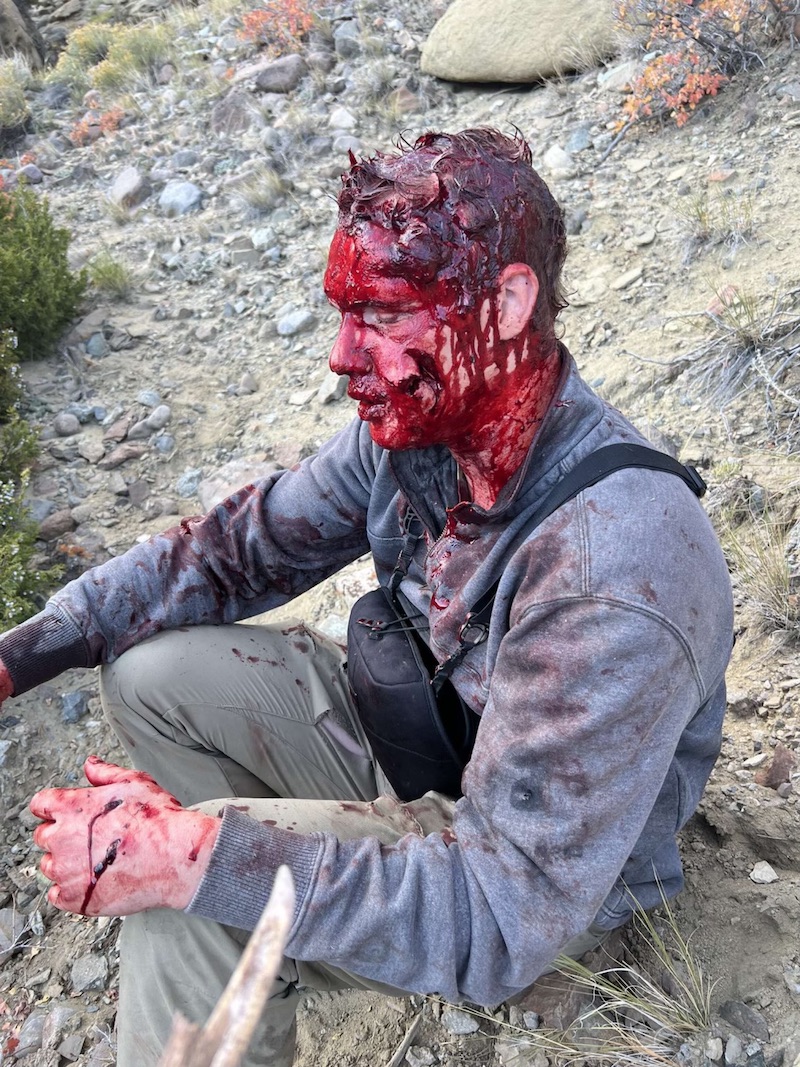 Realizing the gravity of the situation, the two uninjured teammates sprung into action while their wounded friends went into shock. Taking turns, Jackson and Harrison hauled the victims about a mile down the mountain, until they were scooped up in a side-by-side sent by the Park Country Search and Rescue team. Cummings was life-flighted from the scene to St. Vincent Healthcare in Billings, Montana, and Lowry ended up there the same day via ambulance.

After several surgeries, Lowry for a broken arm and lacerations to his back, and Cummings for extensive head injuries, the two friends are already on the mend and looking forward to getting back to both wrestling and romping around in the hills.

When asked if the attack would change anything for the two teammates, Lowry scoffed at the idea. “I’m going to get back to the mountains as soon as I can,” he said. “It’s my happy place, it always has been. I’m not going to give up the mountains or shed hunting. That’s for sure.” 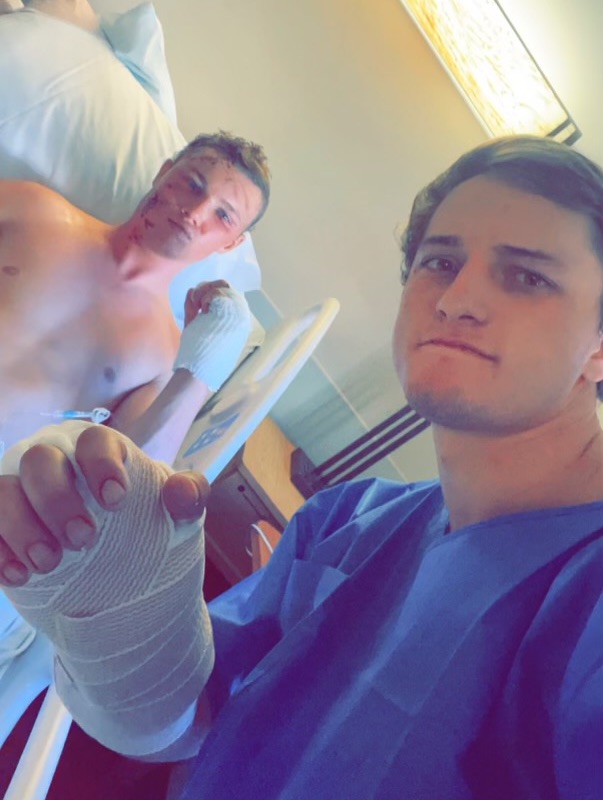 Lee Francis of Evanston, Wyoming, is currently recovering at the University of Utah Health Hospital after a run-in with a grizzly bear on Oct. 21 left him with a bullet hole in the leg. The 65-year-old was elk hunting in the Rock Creek area in the Gros Ventre Mountains with his son when the bruin charged him from only 10 feet away. "I pulled the pistol, and then the bear just came flying out at me," Francis told KSL News. "I put my foot up to...

On May 25, a 68-year-old woman was killed by a grizzly bear near Water Valley, Alberta. "The individual had gone for a walk on their property and was found deceased on one of their trails," Alberta Fish and Wildlife said in a written statement. The individual’s name was not released. Despite finding her body partially buried, which initially led officials to believe the attack was predatory, they concluded that the woman’s death was the result of...

Shed Hunter Killed By Grizzly in First Attack of 2022

On Wednesday, March 23, Livingston, Montana, resident Craig Clouatre went shed hunting with his friend Hans Friedmann. At some point they separated ways, but Clouatre never made it to their rendezvous spot. When the Park County Sheriff’s Department received notice that Clouatre hadn’t returned home from the Six Mile Creek area of the Paradise Valley, they sent out the cavalry in search of him. According to the Missoulian, the search began the...