Hawaii’s Board of Land and Natural Resources (BLNR) issued the largest fine in state history on May 14. Hilo resident Wayne Spatz was fined $633,840 for dumping ant poison into Pāhe’ehe’e Stream to kill and collect massive quantities of Tahitian prawns for illegal sale.

“The action today sends a strong and clear message to anyone else who is endangering people’s health and killing life in our streams,” BLNR and DLNR Chair Suzanne Case said.

According to the DLNR, Spatz was charged $100 for each of the 6,250 prawns he took. Additionally, he was fined $200 for the unlawful use of poisonous substances and $8,640 to pay for staff research and overtime necessary to solve the case.

Tahitian Prawns are not native to Hawaii. Despite the name, the species has native ranges across the world. Hawaii state workers introduced Tahitian prawns into two streams on two separate islands, Molokai and Oahu, in 1956. Fifteen years later, the prawns are now found in 42 different streams and on every single Hawaiian island. Although humans are responsible for the original introduction, their spread and proliferation occurred without additional assistance.

After hatching, Tahitian prawn larvae wash out to sea where they spend a month growing and molting. Just before reaching maturity, the young prawns seek out whatever fresh water source they can find and make their way upstream where they spend the remainder of their lives. This lifecycle makes them exceptional colonizers, and they have been common residents of most freshwater systems in Hawaii since the 1970s. 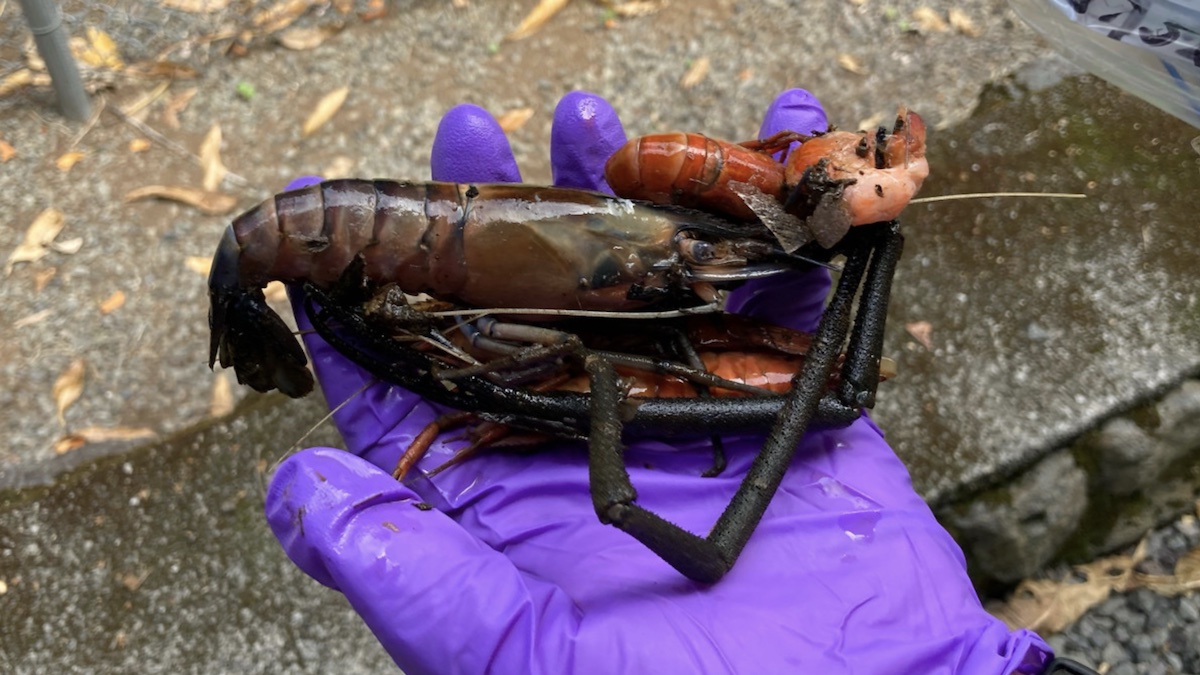 They are considered invasive since they compete with native shrimp and prawns, but their impacts have not been closely studied. Harvest is allowed and DLNR has no bag limits on Tahitian prawns. Common and legal methods of take include nets, spears, and spotlights. But dumping poison into the water and then scooping up dead prawns as they float downstream is both illegal and destructive. Unfortunately, this practice has become common enough to draw significant attention and resources for Hawaii DLNR.

Last July, DLNR Division of Conservation and Resources Enforcement Officer Edwin Shishido received an anonymous tip and witness report of someone pouring “Home Defense'' liquid ant poison into Pāhe’ehe’e Stream. They teamed up with the Division of Aquatic Resources (DAR) and Hawaii Department of Agriculture (HODA) to collect evidence of the poaching through water, soil, and prawn samples.

“These crimes against people and our resources simply cannot be tolerated,” Shishido said.

Troy Sakihara works for the DOR and conducted the biological assessments on the stream. He testified to the board the importance of condoning these pesticide practices.

“The illegal and unethical use of these pesticides in streams have shown to cause extremely damaging and long-lasting effects to all aquatic stream animals, native and non-native,” Sakihara said.

“These pesticides are highly toxic to all aquatic animals and result in extensive recovery time, particularly for native and endemic stream life. Typically, non-native and invasive species are the first to repopulate these impacted streams. Therefore, these types of activities can severely alter the natural biological conditions and overall health of the stream ecosystem. Further, human health and pets can be at risk if the prawns that are captured using pesticides are consumed.”

So in addition to decimating stream health with this thoughtless act, selling these poisoned prawns is endangering human health. Clearly, the BLNR hopes to make an example of Spatz to discourage future destructive acts.

“This very significant fine lets illegal fishers know that we take these matters, very, very seriously,” Chair Case said. “If you’re engaged in these types of activities, eventually the law will catch up with you. This kind of illegal and extremely harmful fishing behavior collecting prawns in streams using poison is unacceptable and we will enforce it at every turn.”

For once, I think we can be satisfied with the fines dished out to a poacher. Well done, Hawaii.

Conservation
Get the latest in your inbox
Subscribe to our newsletters to receive regular emails with hand-picked content, gear recommendations, and special deals.
Our picks for the week's best content
For the whitetail obsessed, with Mark Kenyon
With Joe Cermele and Crew
Technical apparel for the avid hunter
Purpose-built accessories for hunting and fishing
Quality elk, turkey, waterfowl, and deer calls
Privacy Policy

2018: The Year of Record Breaking Bucks

On Jan. 5, a small group of men gathered around an exceptional whitetail rack in Illinois. With measuring tape in hand, they spent the next three hours tallying up the inches of antler. Luke Brewster, the hunter responsible for arrowing the deer, sat impatiently, waiting for the results. It had been two months since he tagged the whitetail, but these final moments were weighing heavily on his mind. “It was pretty nerve wracking,” Brewster said in...

Cal’s Week in Review: In the Field

From elk hunting on the vast Zumwalt Prairie Preserve to noodling for catfish in Tennessee, MeatEater’s Director of Conservation Ryan “Cal” Callaghan is known to have some interesting weeks. He’s taking his Cal’s Week in Review podcast into the field for this new series. watch the videos below and be sure to subscribe to the podcast. Cal in the Field – Ep. 1: Elk on the Prairie On this episode of Cal’s Week in Review: In the Field, MeatEater’s...

We are thrilled to welcome Ryan “Cal” Callaghan to MeatEater, Inc. as Director of Conservation. Ryan has been a beloved friend of MeatEater’s and a frequent guest on both the MeatEater TV show and podcast since 2012. Prior to joining MeatEater, Ryan spent 12 years with technical hunting apparel brand First Lite, initially consulting the brand as a full time guide, which then led to his role as director of conservation at the organization. With a...