The Buck That Never Shed Its Antlers

This summer I was tipped off that a hunter in northern Iowa had a hard-horned buck at his farm on the Fourth of July. Accompanying the message was a trail camera picture dated appropriately, showing a velvet buck and a hard-horned buck at the same mineral pile. I was skeptical, so I tracked down the owner of the pictures to see what he could tell me.

“This buck was one of the first pictures I had on camera this summer,” said Aaron Anderson of Linn Grove, Iowa. “I actually cursed the memory card when I started going through it, thinking that there was a malfunction and it was showing me pictures from last fall. I quickly realized that wasn’t the case though, and that there was actually a hard-horned buck running around.”

Anderson seemed genuine on the phone, but I still wasn’t convinced. After all, what he was claiming is something that had befuddled every biologist I talked to. To erase all doubt, he agreed to set his trail cameras to video mode to get footage that couldn’t be photoshopped or fabricated.

What he sent me a few days later did just that, proving this was no hoax.

This is a whitetail with which Anderson is familiar. He met the deer in 2015 as a 2.5 year old, and the buck really got his attention in 2016 as an up-and-coming 3.5 year old. It was his promising frame as a young buck that earned him the nickname “Potential.” In 2017, the buck was on his radar, but Anderson never got a shot. The disappearance was no coincidence.

“Early last fall we had a mountain lion roll through the area that terrorized the farm. I found 14 dead deer from the cougar, including a handful of mature bucks. I thought this buck met the same fate.”

Potential became a regular on the farm in 2018 though. He showed up on trail cams all summer, earning a spot at the top of Anderson’s hit list. But he wanted to solve the mystery of Potential’s antlers rather than continue to speculate.

“From our knowledge of whitetails, this is unprecedented,” said Lindsay Thomas Jr., director of communications at The Quality Deer Management Association.

With little to go on, Lindsay put me in contact with some of the most well-respected deer biologists and animal scientists in the world. If anybody had an answer, it would be this group.

Is it a stag buck?
When I first posted a picture of this buck on social media, the most popular theory was that this is a “stag” or “cactus” buck.

Stag bucks are notorious for their unique velvet racks. This is usually a result of developmental issues or injury to a buck’s testicles. Stags don’t experience the same rising testosterone levels of normal bucks, which is why they stay in velvet all fall and grow to abnormal sizes. Being sterile, stags don’t participate in the rut and usually keep their wits about them when other bucks only have one thing in mind.

This is most definitely not a stag buck, though. Since stags have very low testosterone levels, they actually do the opposite of this buck and drop their antlers sooner. Also, stag bucks usually don’t get hard horned, rather staying in velvet all season. 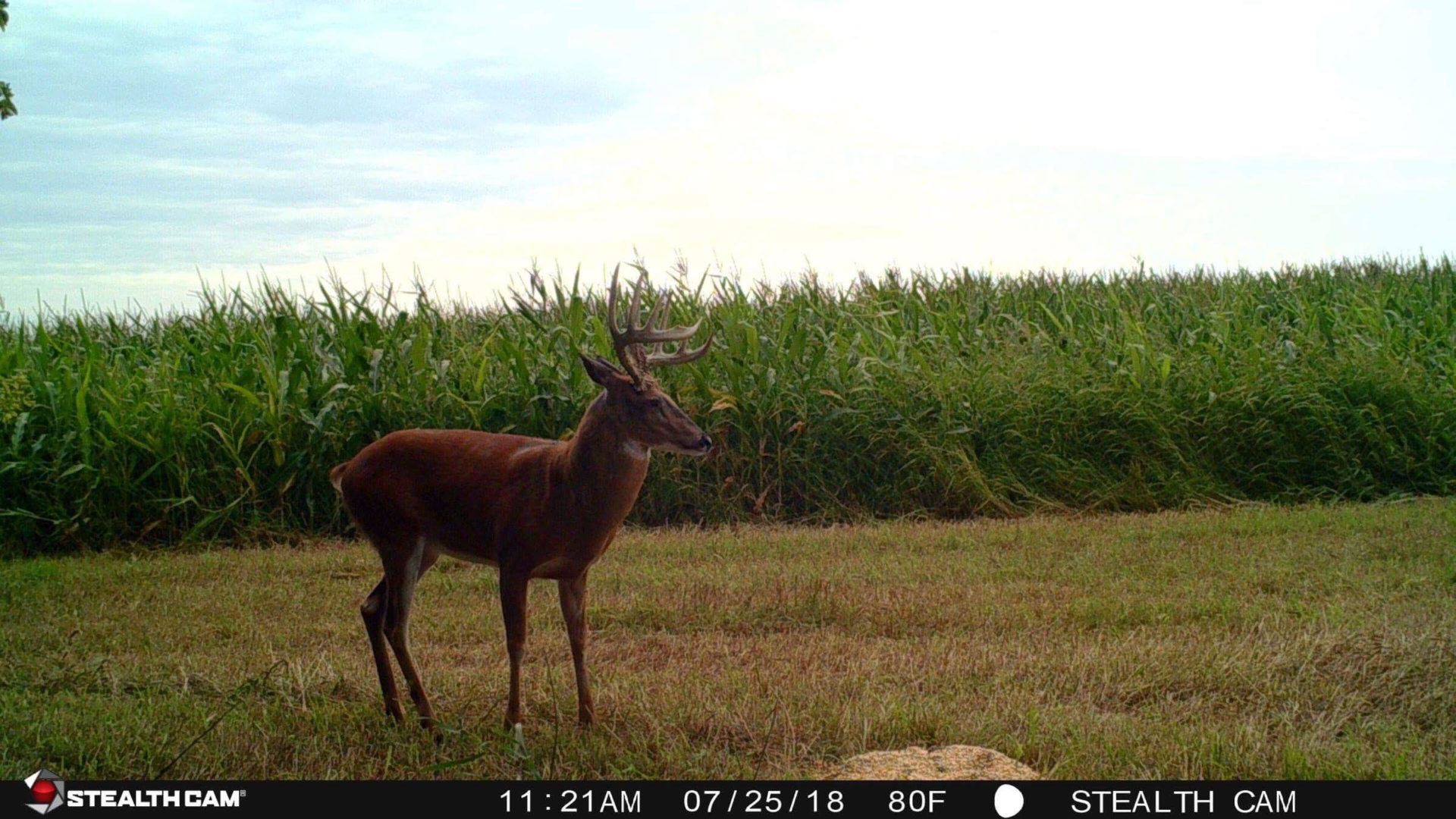 Anderson has ruled out the antlered doe theory himself, as he’s seen the buck chase does during the rut and knows Potential has had normal antler cycles every season prior. From pictures it appears there’s no way this is a doe either, because the deer has a massive body and swollen neck. 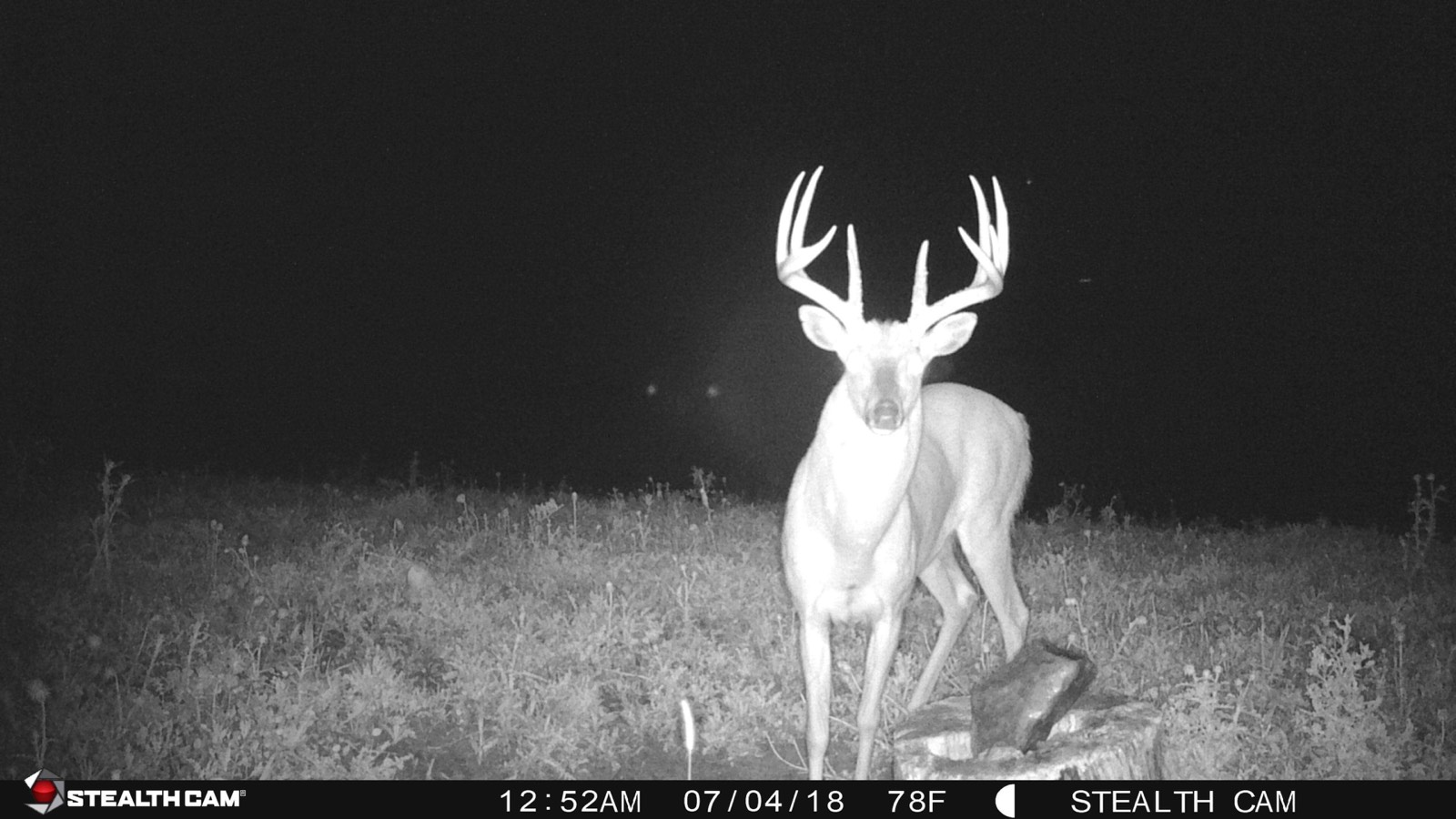 Is it a Doppelkopf buck?
While stag bucks and antlered does are uncommon, even more rare is a Doppelkopf buck. Doppelkopf means “double set” in German and refers to deer that retain one old antler after the other sheds off. The buck grows two new antlers, one normal and one forming around the unshed antler.

Information is fairly limited when it comes to Doppelkopf bucks, but in most recorded cases the condition is due to a head injury around the pedicle. This damages nerves involved with antler growth and causes the antler cycle to fail.

For Doppelkopf bucks, you’ll see new antler growth at the base of the old antler in spring. This will continue throughout summer, as a fresh velvet antler will rise until the old antler is cast.

The Doppelkopf theory is possible for Anderson’s buck, but it’s hard to accept this is the answer. Unlike Potential, Doppelkopf bucks only retain one antler.

Also, while it looks like there might be a small bit of velvet growing under the buck’s left antler, it’s not as much as most Doppelkopf bucks grow. If this were a true Doppelkopf, it would have large velvet masses at the base of both antlers noticeable by July.

What is it then?
All the biologists and scientists I reached out to could agree on one thing—this buck has a heightened testosterone level that has disrupted the normal antler cycle.

As mentioned earlier with stag bucks, antler casting is triggered by a drop in testosterone. Health can be an indicator as well, with bucks that survived non-lethal archery shots or vehicle collisions losing their headgear sooner.

Does that mean Potential is in perfect health and never experienced the winter testosterone dip like every other buck? It’s unlikely according to most biologists.

In defense of this argument, you could point to the mountain lion as a reason for the buck rutting all through winter, spring and summer. If the buck had perfect nutrition combined with an imbalanced herd of unbred does, it could create the perfect storm for a buck to keep testosterone levels high.

“Last year the herd was greatly imbalanced on the doe-heavy side,” Anderson said. “The cat killed a few mature bucks and drove out many others from the area.”

But Anderson also noted that it seemed like most of the mature bucks filed back onto the property by summer. If this was a case of Potential staying rutty because of too many does, he would have likely cast his antlers at some point when herd balance returned.

For that reason, I think the “perfect health” theory isn’t quite on track. In fact, I believe it might be the opposite and that his buck has a serious health problem.

There are a few disorders in humans which can include the side effect of a natural increase in testosterone. One of those is hyperthyroidism, when the thyroid gland produces unusually high amounts of the hormones and causes increased testosterone levels. Another possibility is that this buck has an adrenal gland tumor, which would produce excess adrenalin and in turn increase steroid hormones such as testosterone.

We’ll never know, though. Potential turned up dead on a neighboring farm in November. The carcass had been rotting awhile so a necropsy wasn’t done.

“I guess this mystery will go unsolved. It seemed like he was dead for a few weeks by the time the neighbor found him,” Anderson said. “No one in the area shot him and we couldn’t find any signs of poachers. It appears he ran himself to death, or whatever caused his increased testosterone finally got him.”

Hyperthyroidism and adrenal gland tumors can be fatal. If Potential did run himself to death, it could have been because he was finally getting to act on his increased testosterone with hot does in the area.

Whatever the case, Potential will go down as one of the most interesting whitetails in recorded history.

In my prior life, working at a California-based tech company, my colleagues occasionally mistook my weekend shed hunting trips for two days of storage shed shopping. Upon correcting them, the next question was always the same: “What do you do with those antlers?” My personal answer to this question is not terribly exciting. I set them on shelves, tables, and dressers. I stare at them on cold rainy days and spin them in my hands, reliving memories...

How Shed Hunting Can Help You Fill Tags

Finding shed antlers is fun, but does scooping up a matched set at the end of February mean anything come November? It all depends on the details of a specific antler, whether you have any history with its previous owner, and what you plan to do with the information it gives you. Mark Kenyon is a devout shed junkie who believes that a cast antler is most valuable when on a multi-season quest for a single deer. “The most important benefit to shed...

When Should You Start Shed Hunting?

I grabbed a shed antler from my coffee table this morning and watched as my black Lab’s tail began to wag. His hopeful eyes asked the same question that all whitetail hunters are wondering right now: Is it time to start shed hunting? Shed antlers are a hot commodity in the outdoor world and competition for them is getting fiercer every year. If you’re looking to be as successful as possible, you don’t want to start searching for antlers too early...