Bear in the Darkness: Encounters with a True Alaskan Giant

I woke to the sound of a large brown bear crackling through the brush near my tent. It was early April and I was guiding a small natural history film crew on an island in Southeast Alaska. At the beginning of three weeks of filming, our primary goal was to capture video of brown bears feeding on a humpback whale carcass. I grabbed my flare gun and .44 pistol, unzipped the tent, and crawled out into the black night.

The bear paused 7 yards away, then took a step closer. He showed no signs of agitation. His breathing was steady. There was no huff, jaw-popping, or growl. He knew he was safe and had the advantage of the darkness. Another step or two and I would have slowly risen and gently suggested he leave. But I sensed the bear turning away. Branches snapped and cracked as he slowly made his way deeper into the rainforest. I waited outside the tent for 10 minutes, listening to the quiet of the falling snow.

I wondered if the bear had been "the giant.” I’d seen an enormous brown bear's tracks nearby while my two companions and I set up camp a few days before. The prints were bigger than any tracks I’d ever seen-and I’ve been working with brown bears for more than a decade, beginning with guiding wildlife photographers and working solely with natural history film crews for the last few years. I spend most of my time in Southeast Alaska, but I’ve also explored some of Kodiak Island and the Alaska Peninsula, where the biggest brown bears in North America live. The giant was an anomaly, a mountain of a bear, a beast more commonly seen in nightmares than reality.

In the gray dawn, I studied previous visitors’ tracks in the snow and on the nearby black sand beach. It was early in the year for bears. Most of those we’d seen so far were adult males, who wake up earliest. Females, especially those with cubs, generally come out of their dens in May. Last night’s camp visitor had been a very large male—probably a 9-foot bear—but he was not the giant, which was easily a foot bigger. 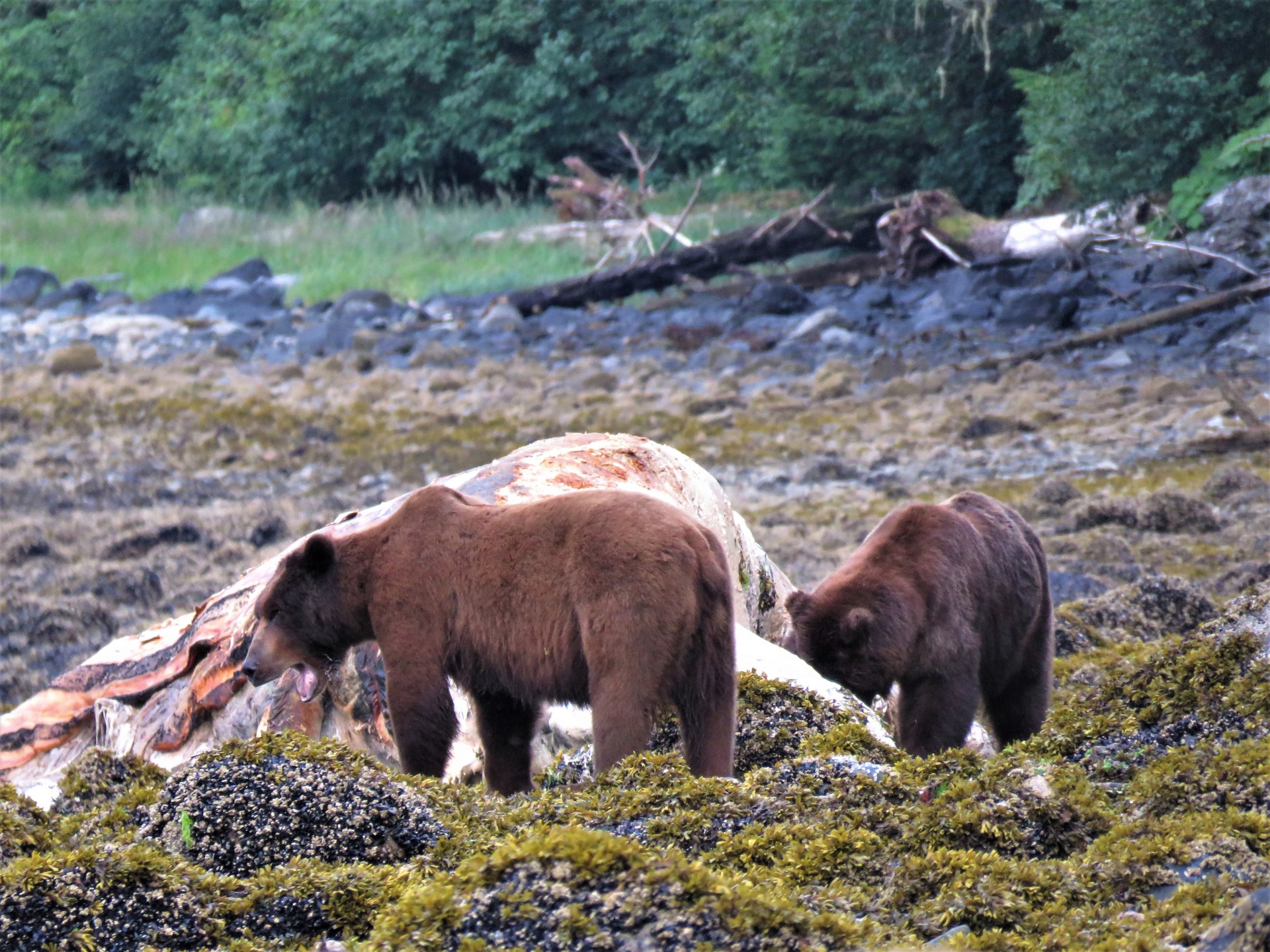 Massive schools of herring had spawned in the sound and turned the water milky. The beach by our camp was covered in a few feet of herring eggs. The eggs are traditionally harvested by the Indigenous peoples of Southeast Alaska and commercial fleets and they are a delicious delicacy, so I was worried bears would congregate to feast. Last night’s bear had walked through the piles of eggs but not eaten any. Surprisingly, we would see no evidence of bears feeding on herring eggs in the days to come. 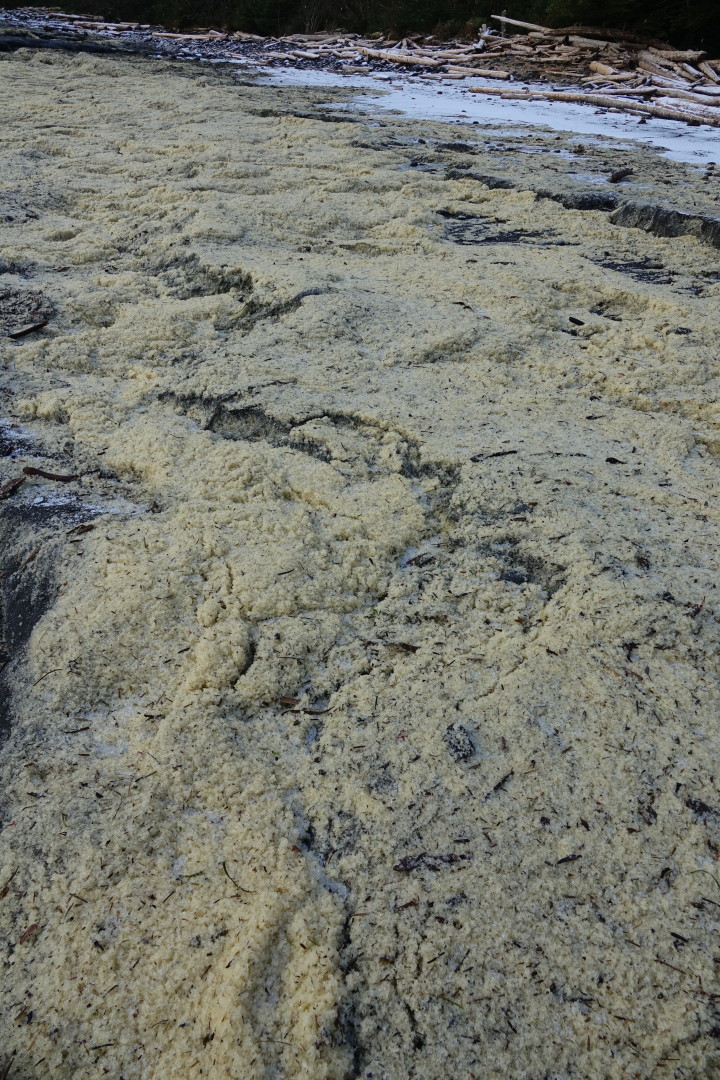 We were exposed to the stormy expanse of the Pacific Ocean. Wind and snow alternating with rain hammered us for the first 10 days. We suffered the elements, staking out the whale carcass when the wind was from the south. When the wind switched to the north, we changed locations and hid downwind of a dead sea lion that the stormy sea had tossed high on the beach. The bears mostly came out at night. We saw a half dozen during dusk and dawn but couldn’t get any usable footage. Some were large males, but none were the giant.

The weather broke, and overnight spring arrived. Hundreds of gray whales arrived to feed on herring eggs attached to any solid surface beneath the ocean. We met two guys who work for fish and game surveying winter-killed deer. They were blown away by the number of gray whales. Migrating shorebirds rested and picked through the mounds of eggs. Sitka blacktail deer emerged from the forest and browsed the high tide line. It appeared they too were eating kelp covered with herring eggs. Bears are generally more active at dusk and dawn, so we’d usually make the 2-mile hike from the whale carcass to camp in the dark. Sometimes we were treated to the Northern Lights streaming green above snow-covered mountains.

With each day that passed, I thought more about the giant. Each evening, I prayed he’d appear from the woods. Big bears are usually very shy, but I figured he’d visit the whale carcass every once in a while. We met a couple from a nearby community who’d boated over to the island to go hiking. Both carried big handguns and seemed a little bit worried about our safety. When I mentioned the giant, they knew exactly which bear I was talking about. They hadn’t seen him, but they had come across his tracks in years past. They had heard stories, too. One was how he’d harassed some deer hunters who’d said it looked like he had a tiny head because his body was so huge. At night, I would fall asleep thinking of him. I imagined his hulk moving through the darkness and wondered what he was doing at that moment.

The camera crew had gotten a lot of good stuff, but morale was a bit low since we had yet to get bears feeding on the whale. I’d filmed on dead whales the last couple of years, later in the season, and they’d been crawling with brown bears. It was early but I was surprised there wasn’t more bear activity. We spent long hours hidden 70 yards away behind a pile of logs near the whale. Often, we’d hear something in the brush. Occasionally a big bear would stick its head out, survey the beach, then disappear again. That big of a bear was likely keeping others away. I wondered if it was the giant. 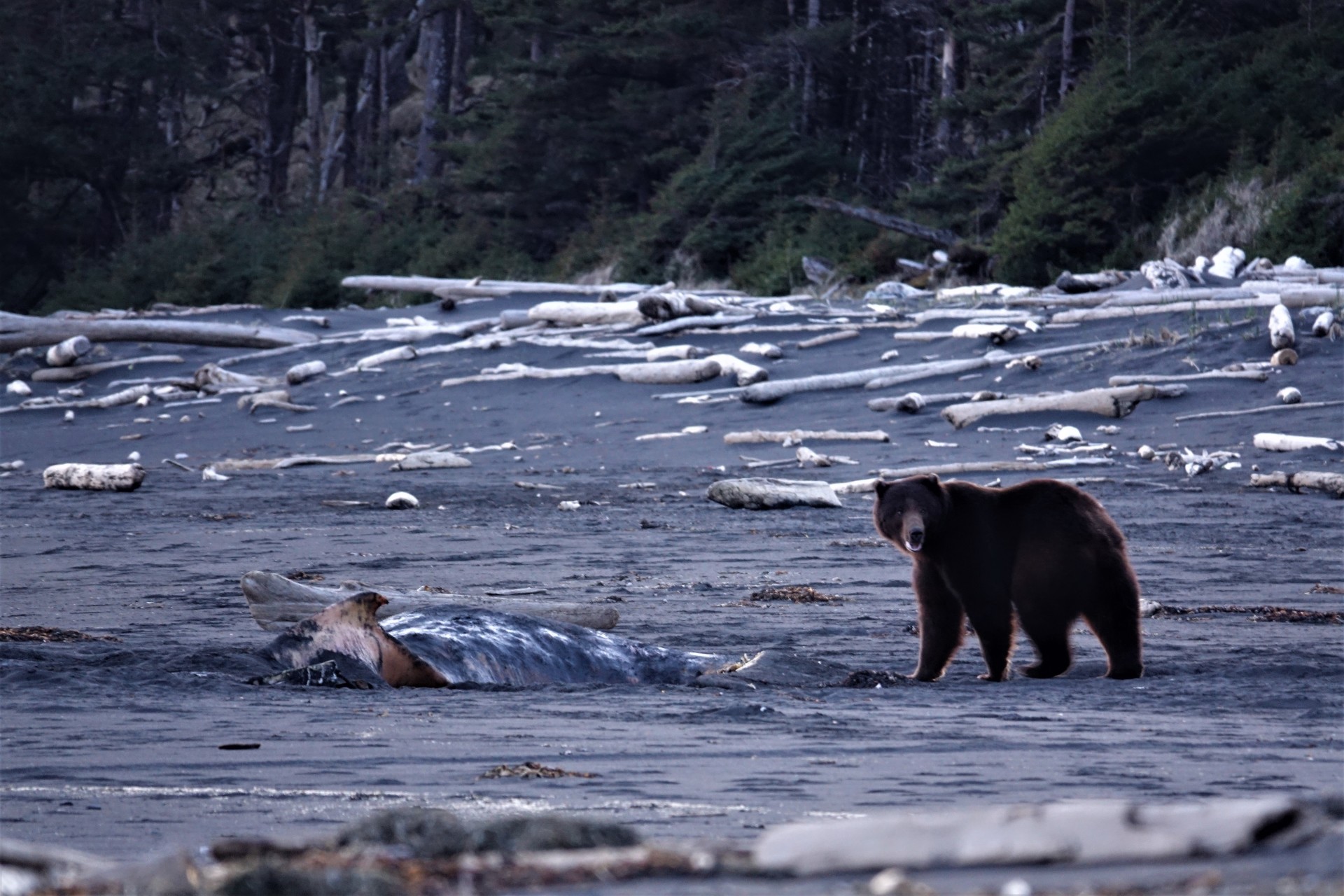 On the 17th day, just as the sun was setting, two bears emerged from the forest and walked down to the whale at the same time. One was a good-sized male, and the other male was smaller, probably 7 or 8 years old. They were nervous; it soon became apparent the source of their fear was another bear just inside the guard timber. The bushes crackled as the unseen bear moved where he’d probably been bedded for some time. I guessed it was the giant. The two bears coming toward the whale were using us as a buffer. They figured the giant would leave them be and give them a chance to feed with us there. The bigger of the two claimed the whale and began feeding. Occasionally, the smaller one would ease in and try to feed, but the bigger bear would push him away.

The bush crackled. I could viscerally feel how pissed the giant was that other bears were eating his whale. The smaller bear came close to us. I hoped the bushes would explode and the giant would come charging out to claim the whale. But he was too smart for that. We filmed until it was so dark we could barely see, but the giant never showed himself.

A few days later, during one of the last evenings, we were staked out by the whale when a gigantic bear stuck his head out of the woods 300 yards away. It was just after sunset and he was panting hard, a sign of agitation that 100% had to do with our presence. Once again, I guessed that he was the giant, though I couldn’t know for sure. He was way too far and it was too dark to film.

We were on pins and needles, hoping he’d come out into the open. He just sat there panting, occasionally lifting his nose to the breeze and waiting. Minutes passed as the falling darkness slowly whittled away our hope. When there was barely light left to see, much less film, he came down from the forest like a hulking shadow moving through the dimness. 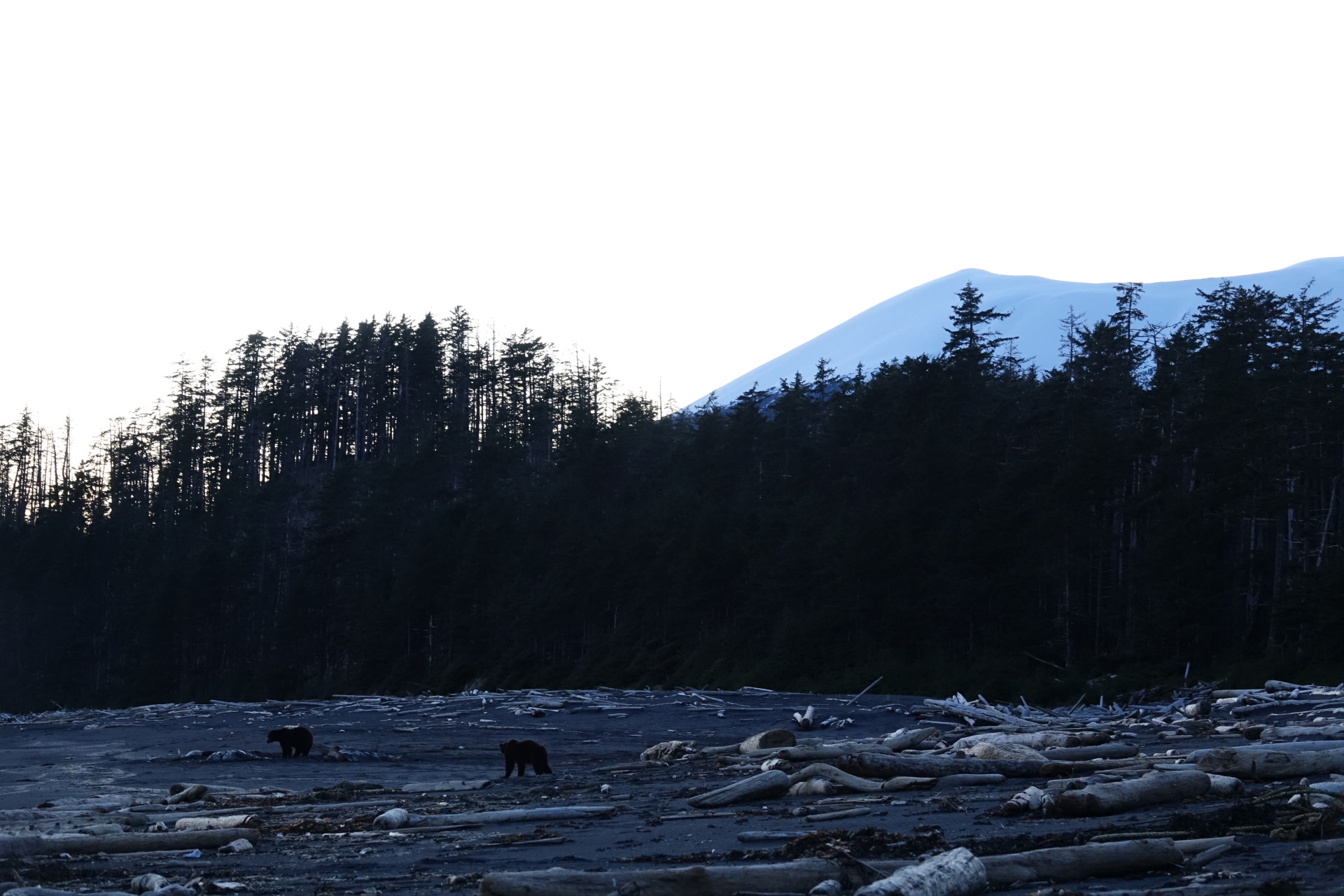 There was zero hesitation nor was there much swagger. Many adult males walk like cowboys, but he knew he was king. He climbed atop the whale and stared at us for several long moments before lowering his head to eat. I shouldered my heavy pack then backed away, watching the giant tear at the carcass until I could no longer tell him from the darkness.

Save this product
Benchmade
Steep Country Knife
$162.00
Shop Now
Save this product
Vortex Optics
Diamondback HD Binoculars 10x42
$249.99
Shop Now
Save this product
Vortex Optics
Razor HD LHT 3-15x42 Riflescope
$1299.99
Shop Now
Coming Soon
Save this product
FHF Gear
FOB Bino Harness
$185.00
Shop Now
Get the latest in your inbox
Subscribe to our newsletters to receive regular emails with hand-picked content, gear recommendations, and special deals.
Our picks for the week's best content and gear
For the whitetail obsessed, with Mark Kenyon
Redefining our connection to food, with Danielle Prewett
Your one-stop for everything waterfowl, with Sean Weaver
Get out on the water with the MeatEater Fishing crew
Technical hunting apparel
Purpose-built accessories for hunting and fishing
Quality elk, turkey, waterfowl, and deer calls
Privacy Policy

Grizzly Bear Meat: Is It Fit for Dinner?

When Idaho and Wyoming tried opening limited hunting seasons for grizzly bears in fall 2018, opponents instantly dubbed them “trophy hunts.” They claimed no one hunts grizzlies for their meat, and charged that hunters only want the big bear’s skull, claws, and hide for rugs and decorations. Those who supported the low-impact hunts—one tag in Idaho and 22 tags in Wyoming—felt stung by the sweeping accusations. Grizzlies hadn’t been hunted in the...

Fact Checker: Are Menstruating Women More Likely to Get Attacked by Bears?

Myths, lies and old wives’ tales loom large in the outdoor pursuits. Here at MeatEater, we’re dedicated to separating facts from bullsh*t, so we created this series to examine suspect yarns. If there’s a belief, rumor, or long-held assumption you’d like us to fact check, drop us a note at factchecker@themeateater.com.  Claim Large predators, like bears and sharks, are more likely to attack women who are menstruating. Origin The claim’s genesis is...

Campers Attacked by Wolf in Canada

Despite their fearsome reputation, wolves are rarely aggressive towards humans. It’s usually bears or mountains lions attacking people that end up in the news. That changed early Friday morning when a wolf in Canada’s Banff National Park attacked a family of campers in their tent. According to Lesley Matheson with Parks Canada, one of the campers received injuries to his hand and arm. The entire family was transported to a Banff hospital for...