Queens Of The Desert: Fly Fishing in Dubai

I don’t know why I was so surprised to hear Dubai has good fishing.  For years I assumed the city to be a major dustbowl of wealth, high-rises, restrictions, and layovers — a pretty ignorant depiction coming from a girl who’d only ever experienced Dubai’s international airport (which is, admittedly, rather impressive). 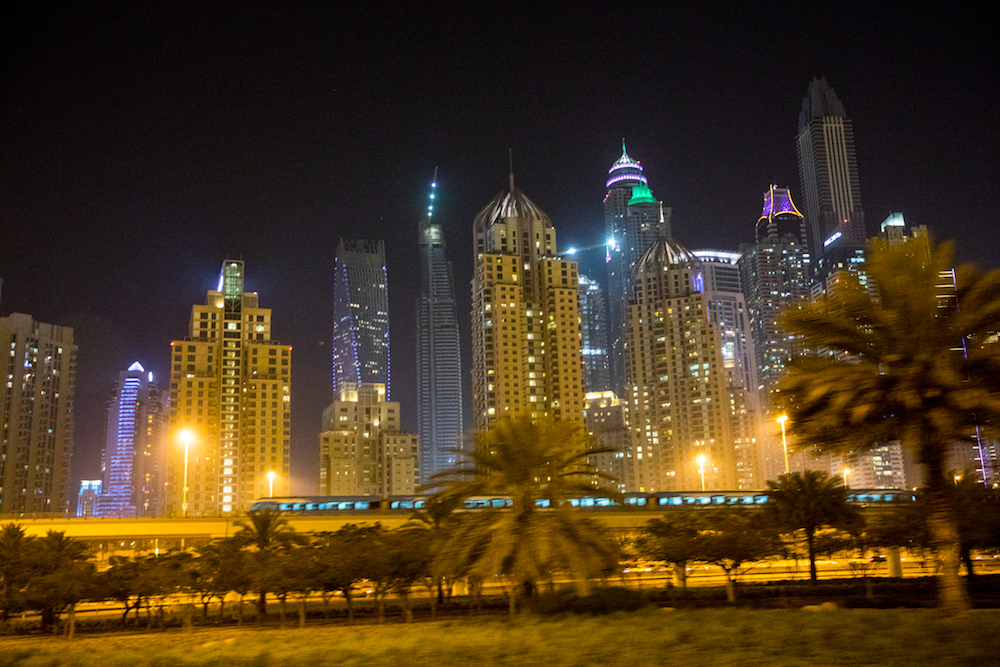 I’d flown through Dubai several times on my way through to the Seychelles and similar highly regarded fishing destinations, but I’d never thought to break up the travel by exploring the fishery there.  Looking at it now, it shouldn’t have been such a foreign concept.  The map clearly shows Dubai, one of seven emirates which makes up the country of United Arab Emirates (UAE), sitting on a perky piece of land situated on the Persian Gulf.  Blue water meets the yellow sand of the beaches; it laps up the reflection of the looming metallic architecture. 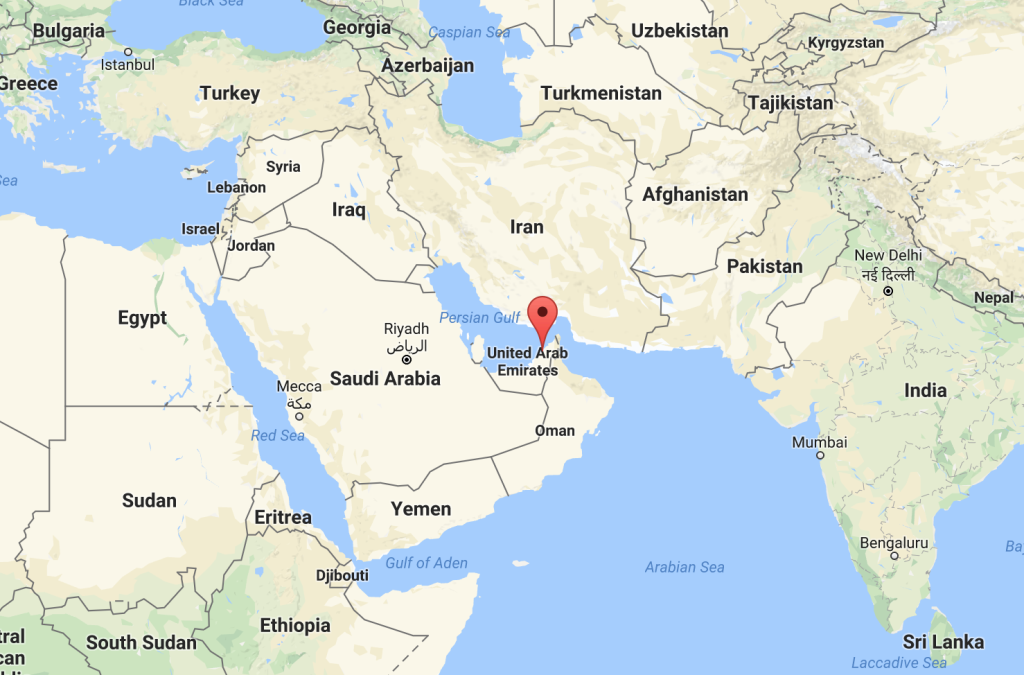 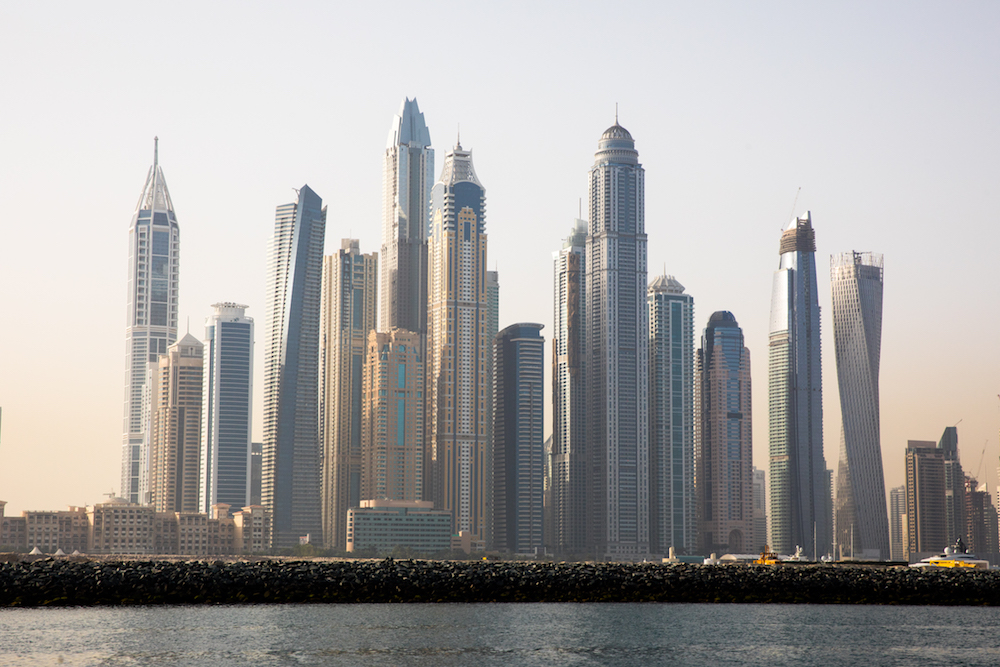 Word had it that South African Dubai resident, Nick Bowles of Ocean Active, was the man to speak to about fly-fishing opportunity in the area.  Luckily, the previous year he and I’d had the chance to meet at a fishing trade show.  I’d been impressed by his knowledge about Dubai’s culture and fish species, and so confirmed several days with him the following April. 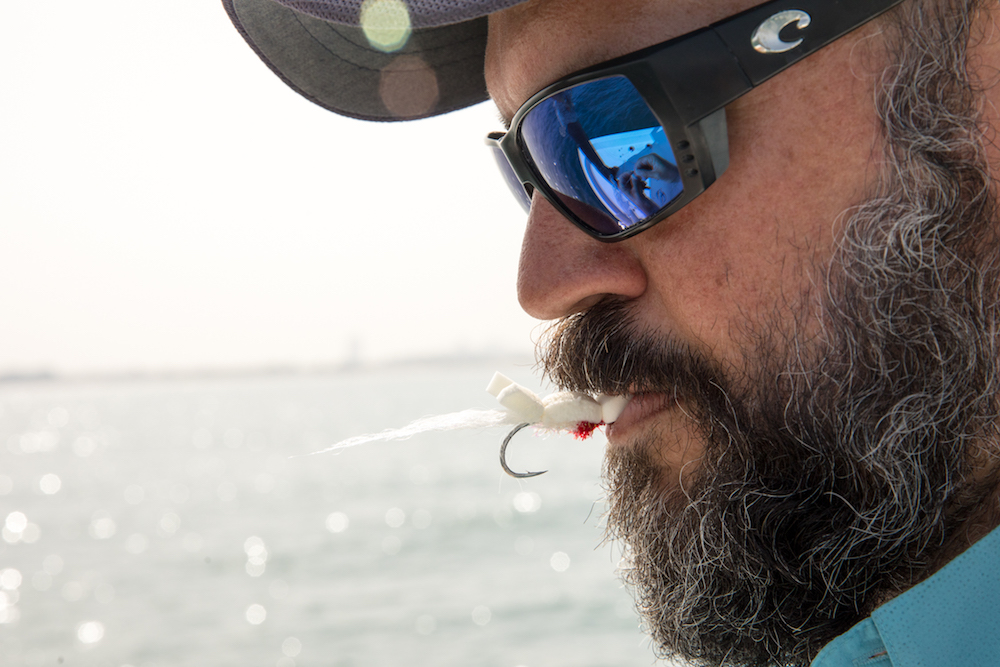 Exhaustion ate any memories I had of my first night in the big city, but the 5:00am start time came easy with the jet lag.  I packed my gear and prepared to raid the hotel’s 24 hour cafe — as though leaving for the world’s most remote desert excursion.  Unbeknownst to me, our travel time from hotel to fishing spot was only twenty minutes, overfilling me with as much relief as my cooler was with food.  Then the concern kicked in: what sort of big city had decent fishing merely minutes from its docks?  And not just any docks.  Dubai docks with access via the mall. 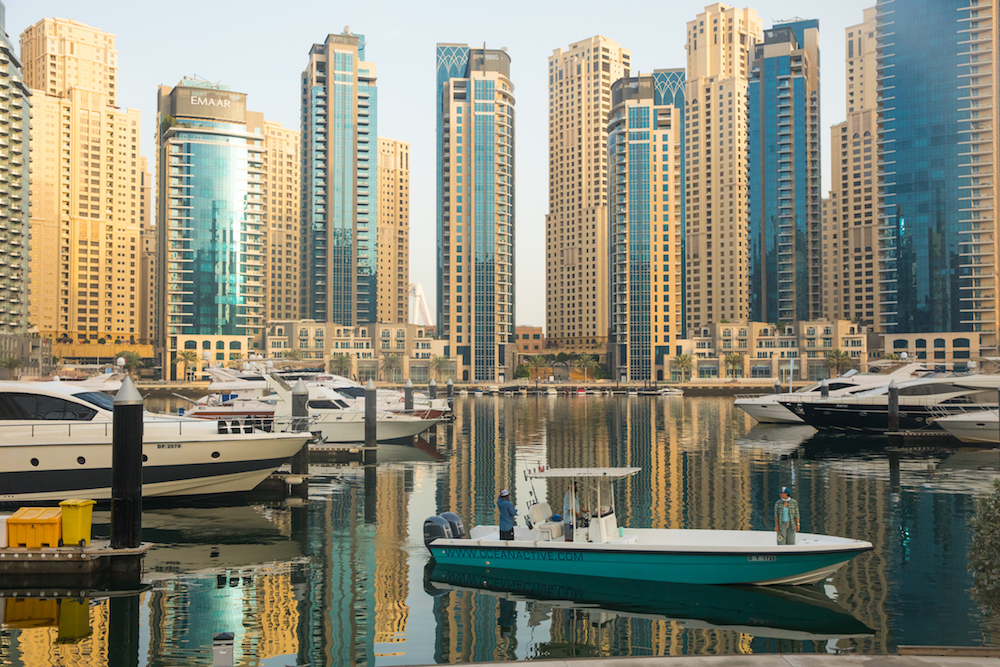 Dubai has a tendency to add flair to just about anything it decides to commit to.  Aerial views of the city showcase a most genius layout (I strongly advise Googling this), its hotels are like none other I’ve ever seen, their indoor activities are next-level, and even the most simple of desert excursions have that “one step further” vibe.  I was certain I’d be disappointed with their fishing.  How could I not be when it’s the one thing beyond their control? 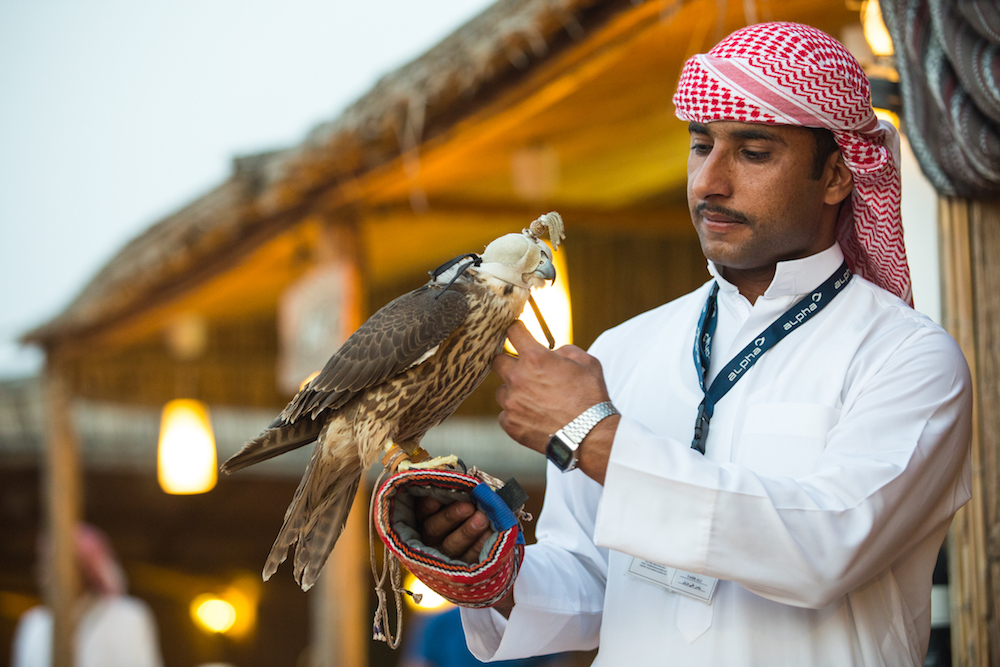 As we motored through the landscaped marina, small queenfish busted bait around us, yet I was under strict instruction to wait until we were beyond the marina walls before starting to cast.  As promised, a two minute ride with the boat on plane had us immediately on top of a larger school of bait and an even larger school of queenfish.  First cast, second cast, third cast… one after the other, fish couldn’t seem to leave my Klouser (spelling?) alone.  We quickly made the switch to poppers, and my arms shook until they could hardly land another fish.  Both morning sickness and exhaustion, likely a combination of the two, eventually had me admit defeat, so the boys joined in on the royal chaos.  I rested atop the Yeti and hoped no one would notice my grey, sweaty face. 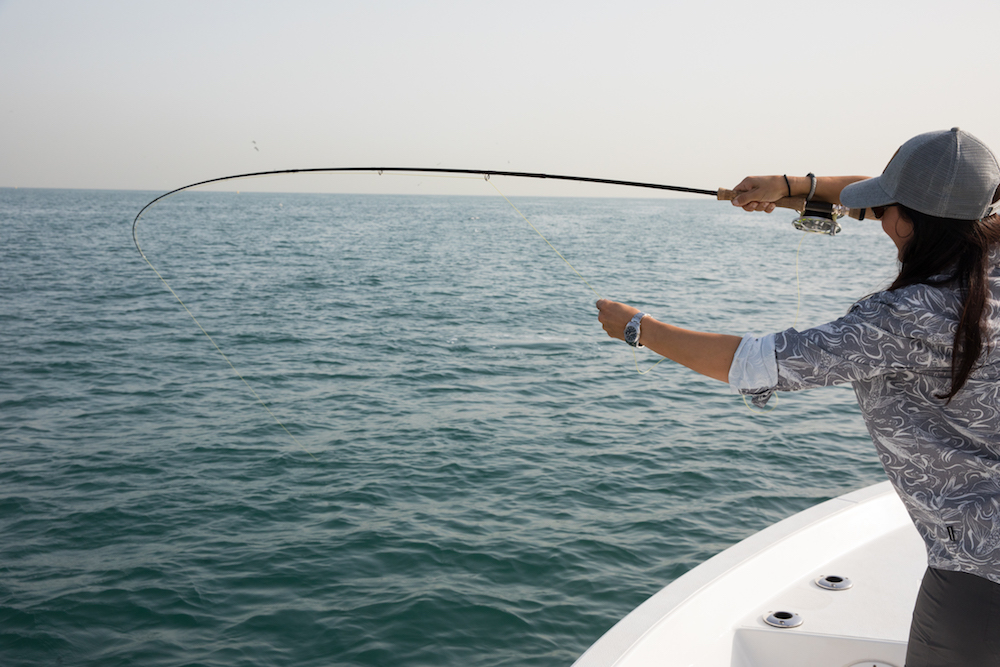 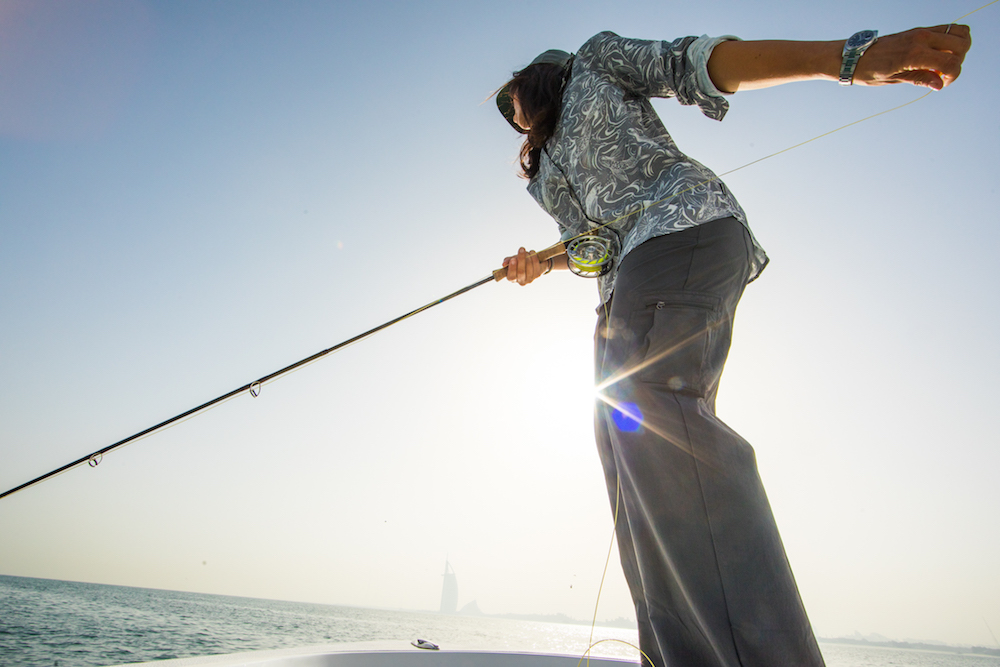 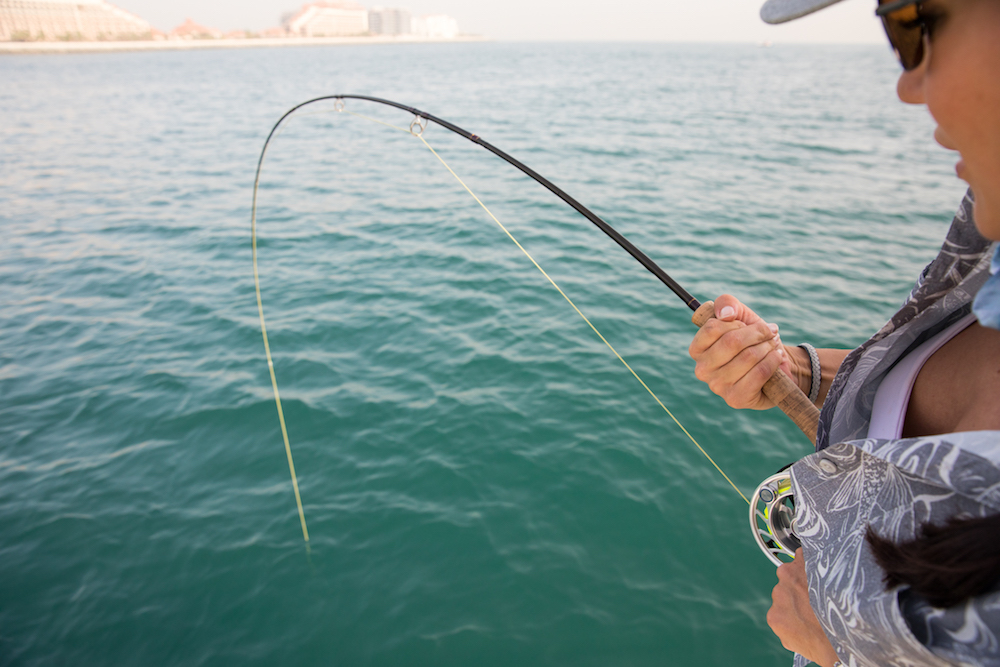 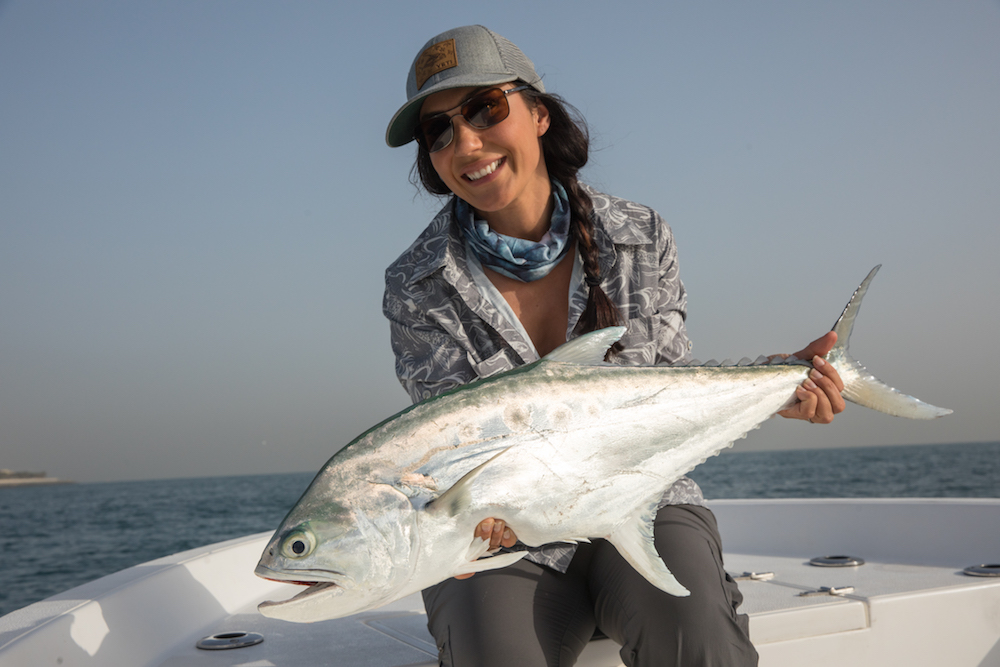 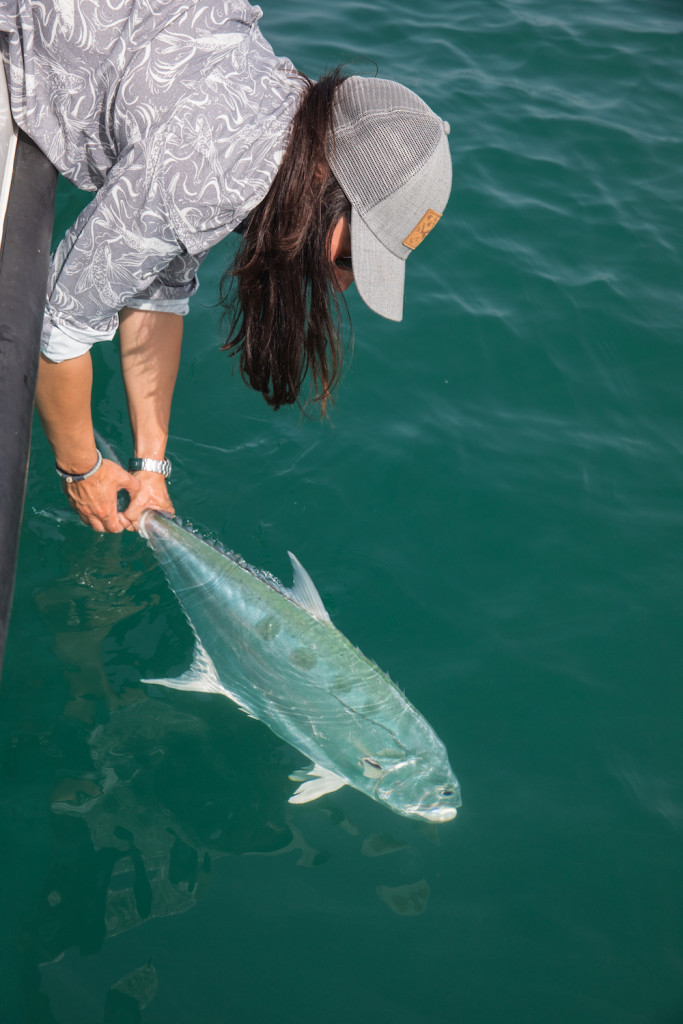 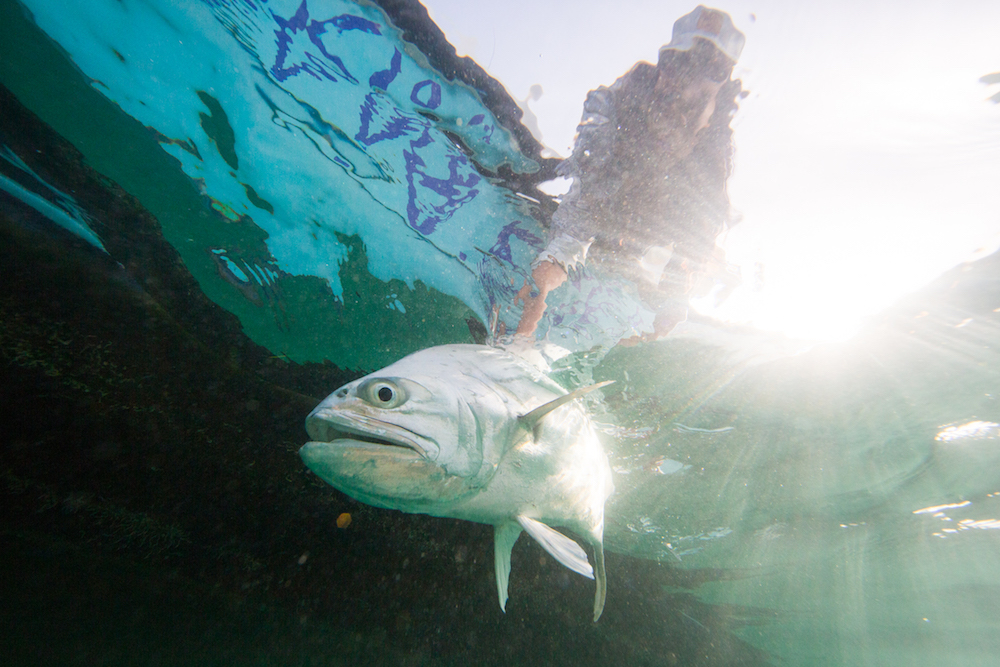 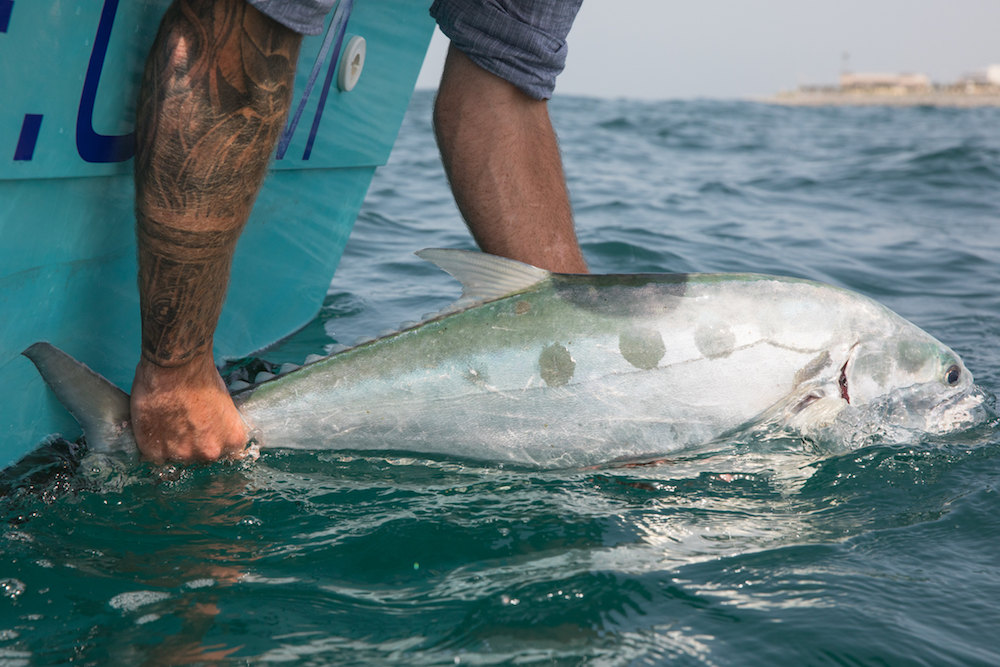 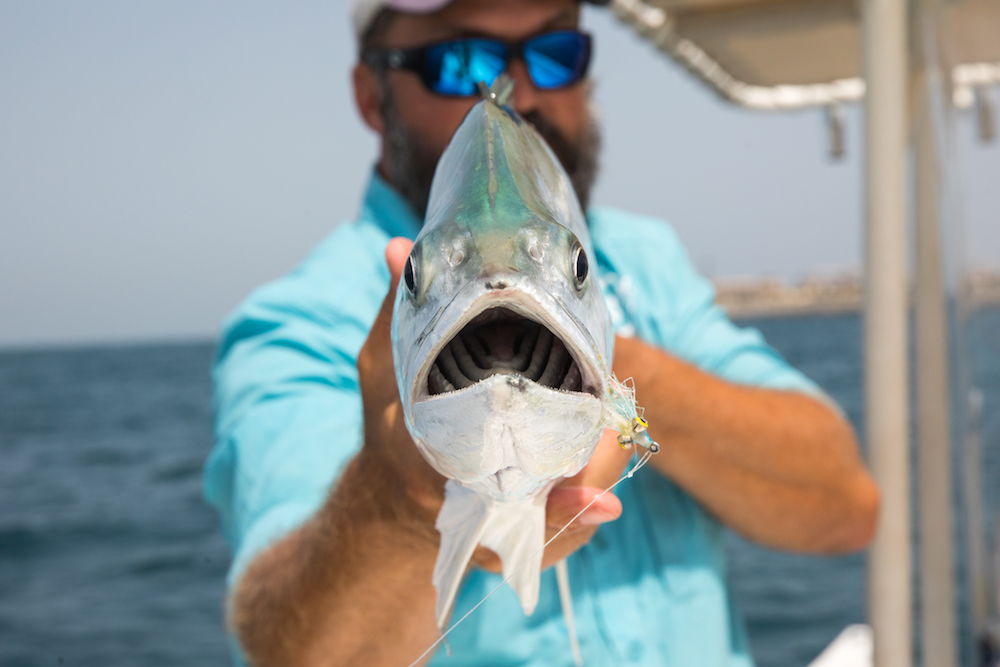 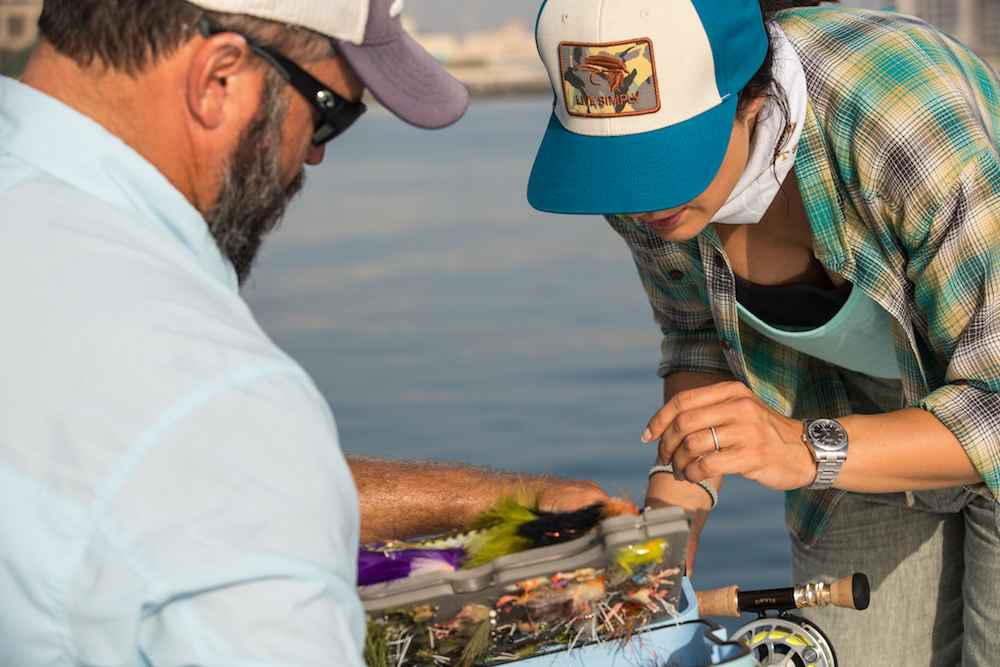 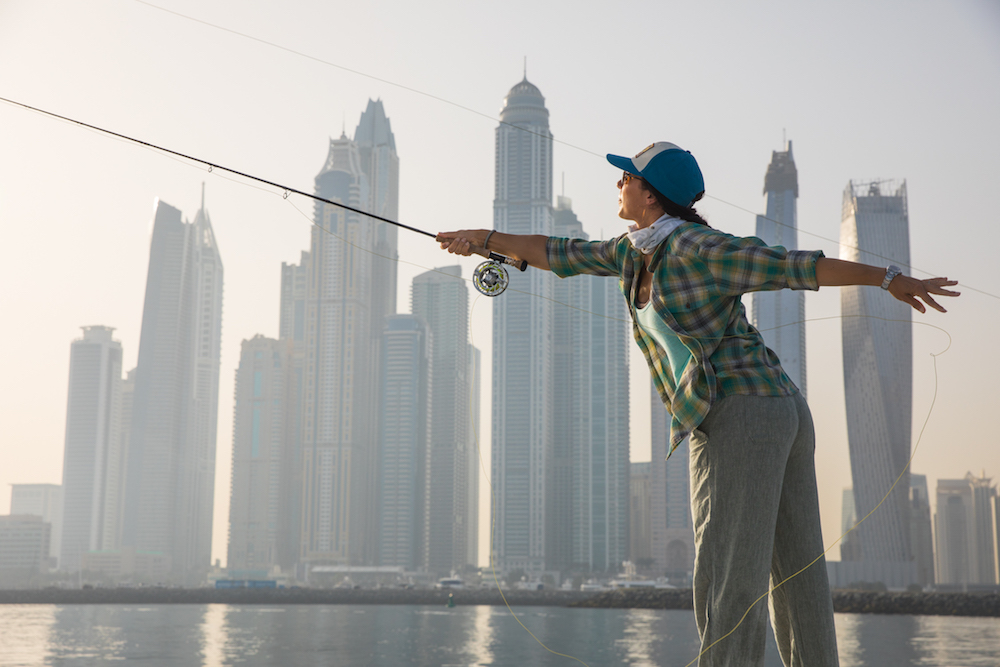 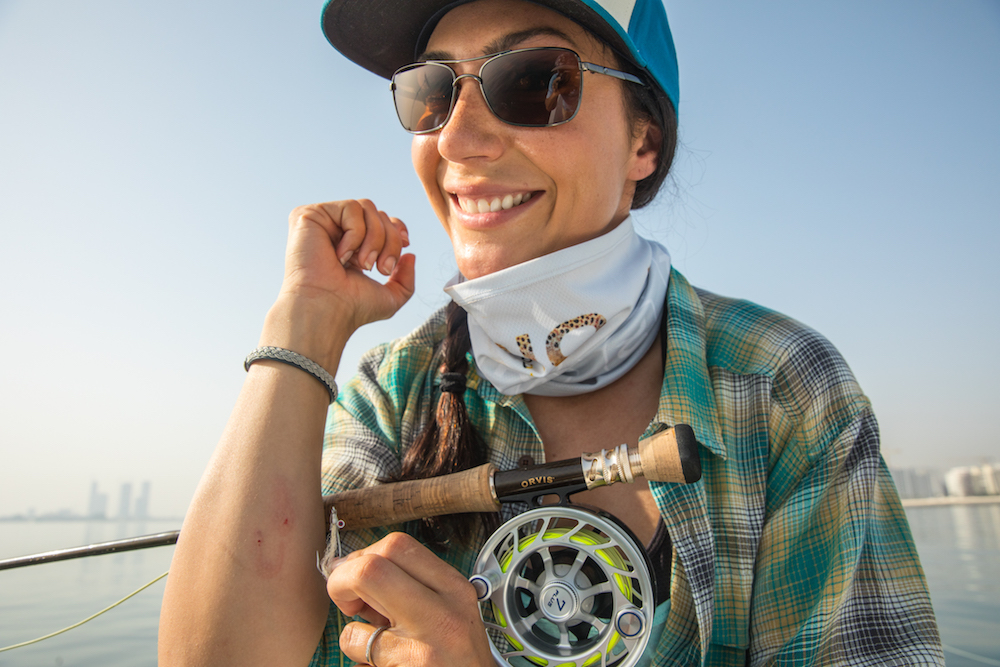 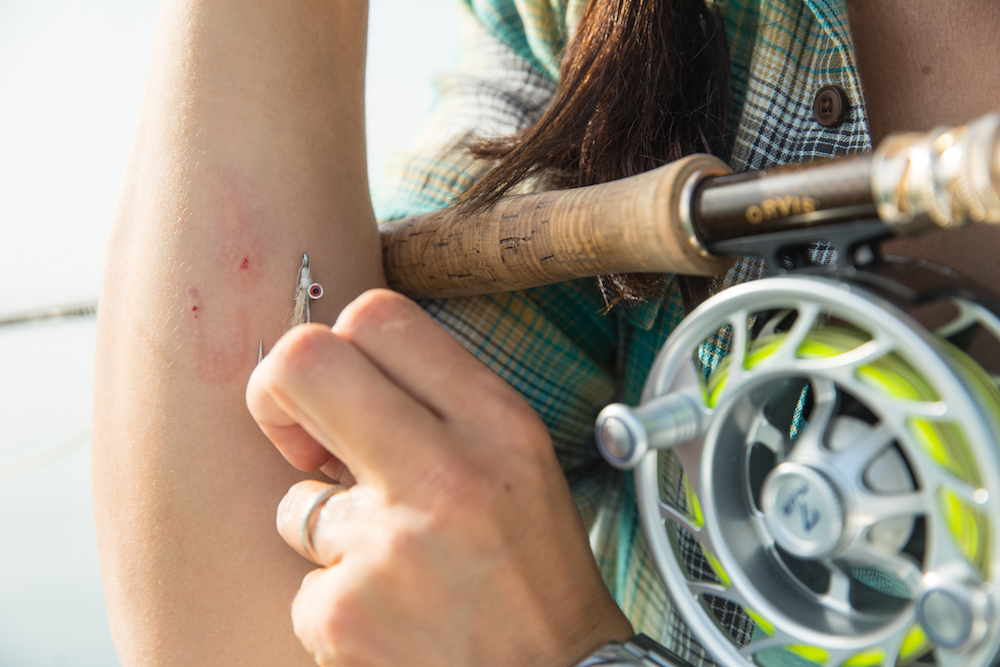 Fortunately for everyone, the Dubai fishing days are short.  After around 11:00am the heat takes no pity on participating fools.  We waited until we couldn’t take it anymore, and then turned in for a midday nap before boarding a flight later that evening.  I was able to sit down with operator Nick Bowles to hear more about the fishery.  You can find that conversation here:  www.aprilvokey.com/podcasts or https://itunes.apple.com/ca/podcast/nick-bowles-destination-dubai/id951475911?i=1000386157567&mt=2 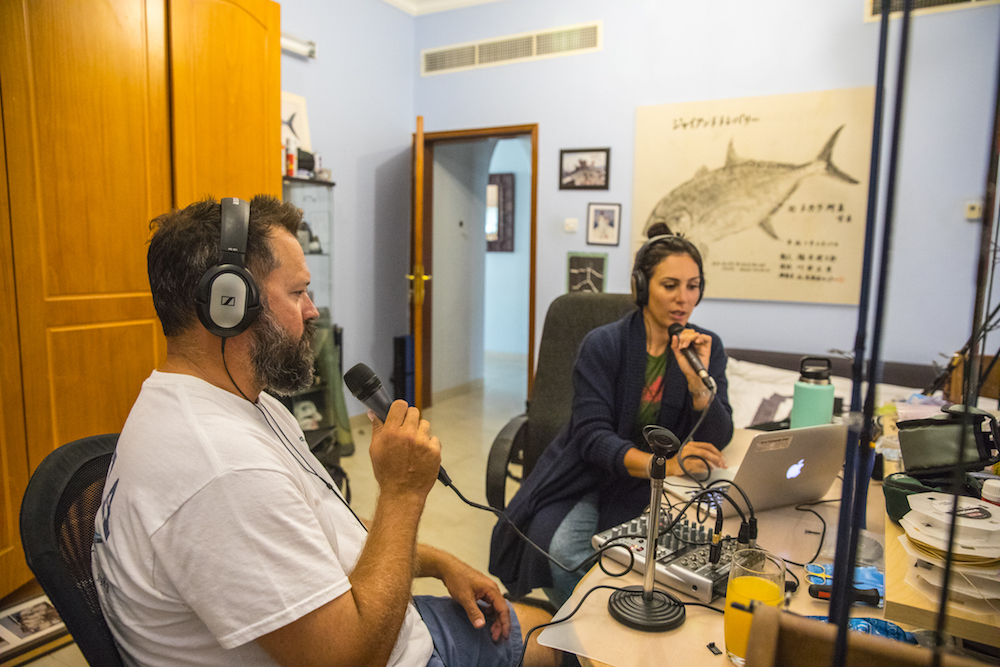 Fly ,
Get the latest in your inbox
Our picks for the week’s best hunting, fishing, wild foods, and conservation content.
Big bucks, land management, rut reports, and tips for the whitetail obsessed.
Privacy Policy

Taking the Fly Out of Fly Fishing

I caught the fishing bug early. As a kid, method didn’t matter. I used ultralight spinning rods and...

I caught the fishing bug early. As a kid, method didn’t matter. I used ultralight spinning rods and...

Fly Fishing in Bolivia: Beyond the Gold

People often ask me where my favorite fly-fishing destination is.  Without hesitation my answer is...

People often ask me where my favorite fly-fishing destination is.  Without hesitation my answer is...

Fly Fishing for Billfish: The King of the Ocean

I steadfastly refused to troll for gamefish. An avid steelheader, the idea of casually lounging in a...

I steadfastly refused to troll for gamefish. An avid steelheader, the idea of casually lounging in a...