If you enjoyed Episodes #62 and #159 of the Wired To Hunt Podcast with John Eberhart, this story is for you. Over the last half year, John’s been sharing detailed descriptions of his past hunts, including this one today, which offer a rare chance to get into the mind of one of the most successful DIY bowhunters in the country. Take this opportunity to really process what he does and why he does it. And if you’d like to learn more from John, check out his Whitetail Workshops being offered this year. – MK

In 1975 I began working at Jay’s Sporting Goods in Clare Michigan. At the time compounds bows were just hitting the market and I bought a 50 to 60 pound Bear Polar II which had 6 wheels, a 50% let-off, and was a sloth in speed compared to bows in today’s marketplace. Back then on average in Michigan according to the DNR, only 2% of licensed bowhunter’s took an antlered buck (3 inch spikes or better) with a bow and 7% took a deer with a bow. Nowadays nearly 30% take bucks with a bow and around 40% take a deer every year. Just taking a deer with a string and stick was a big deal then and just about anyone you asked for permission would say, knock yourself out.

I had been bowhunting since the mid 60’s with a recurve and cedar arrows and had planted a lot of cedar trees (misses where I couldn’t find the cedar arrow) since most of my early hunting was from the ground and missed arrows slid through the weeds. Hunting from trees back then wasn’t legal for any type of deer hunting. By the mid 70’s I was getting to the point where I was very proficient at taking year and a half old bucks every season and in 1972 I took my first mature buck with a bow.

Now it was 1976 and for a lack of a better term, I was hunting my butt off and was shooting in leagues and my team was winning pretty consistently. But I wanted to step my game up to consistently take 2 ½ year olds and was really beginning to learn on my own and understand how, when and why deer did what they did.

There were no books on bowhunting and the only guys that got much ink in magazines were the Benoit’s out of Maine and their gun hunting tactics were stalking big tracks in the snow in big timber areas where property lines didn’t exist. They were gun hunters that weren’t concerned about fences so they had nothing to offer bow hunters as bowhunting is pretty much a sit and wait or ambush game.

I can’t remember the exact date in 1976 but it was in the last couple days of October that I went in for this particular evening hunt. The area was comprised mostly of mature oaks, maple, poplar and black cherry with tall ferns as the only understory and they were beginning to wilt and tip over, which made the woods relatively open. There were interspersed areas of dense saplings and to the south was a couple hundred yard wide swamp with interspersed cedars and hemlock that ran east to west along the entire road frontage.

There had been a good buck in the area but a friend had hit and not recovered him and we all assumed he had died.

It was a beautiful sunny day of about 55 degrees when I left the house and the wind was out of the south. Most of my rut phase locations were set up for a prevailing northwest wind direction but I did have a couple for a southerly wind. I climbed up a big red oak and stood on a chunk of 2X6 I had nailed into a crotch about 25 feet up the tree and when I looked at my watch it was 3:07. The red oak was pretty close to the center of the section and back then I used to wear all my gear in and was a bit sweaty. Just about the time my body was cooling off I saw an older man with his dog walking right towards me from the south. He wasn’t hunting anything, just out for a casual walk through the woods and he had just as much right to be there as I did.

He never saw me even though he walked right under me. He had come from where I expected deer to come from and I knew they had left a ton of odor and that most likely any deer coming from that direction would spook and go elsewhere. It was an easy decision for me, now all I had to do was locate where elsewhere was.

I got down and began freelancing to the southwest in search of a brand new location. Had I went south, any coming in from the south would have to cross the old man and dogs path, and any deer coming in from the north would be downwind and historically this area had a north/south movement pattern.

I probably went about a quarter mile before I found “the spot” and I actually couldn’t believe I’d never found this location when scouting before. There was a huge sprawling white oak that was loaded with acorns sitting in a small opening with dense poplar saplings 15 yards to the west, the northern edge of the swamp was 25 yards to the south and the sparse timber I had walked through was to the east.

Now my only problem was how to get up onto the huge bottom branch so I could climb farther up to a branch that looked perfect to sit on with another branch to lean against. I tied my bow rope onto the bow and threw the end up into the tree. The huge bottom branch hung low at the end so I walked out towards its end and low and behold there was an active scrape below it. I jumped up and grabbed the branch and pulled myself up onto it and balance beamed my way to the trunk.

Of course by now I’m sweating again but back then before scent control, the hunt was over for any deer that walked downwind anyway, so the sweating part simply made me uncomfortable. By 4:20 I was sitting on a branch about 20 feet off the ground and was ready and it wasn’t long before a couple does and fawns stepped out of the swamp and skirted its edge heading east.

About 5:40 I heard some deer in the saplings to the west and while I never heard a grunt, it sure sounded like a buck chasing a doe around. The noise kept getting closer and then a big doe burst out of the saplings and ran past about 18 yards on the downwind side of the oak and just kept running like Forrest Gump.

You all know what happened next. Yep, a big 10 point busted out of the saplings and was hot on her trail. While at full draw I had to make three vocal doe “matt’s” in rapid succession to get him to stop and each one was louder than the previous. By the time he stopped he was about 25 yards and quartering away. Perfect, so I let the arrow fly and it hit him a bit farther back than planned. He wheeled and ran directly north before cutting back into the saplings and he was carrying my Easton Gamegetter aluminum arrow tipped with a Satellite Aero 4 blade head.

I had hit a couple other deer in the liver before and knew it was best to let them lie for a while before recovering as they need time to expire so I left and came back with help the next morning. The buck traveled about 120 yards before piling up and when I got to him I was pleased to lift my first double digit rack of antlers from the ferns. He had 10 points and while I never recovered my arrow, it had passed through the front of the liver and both lungs. 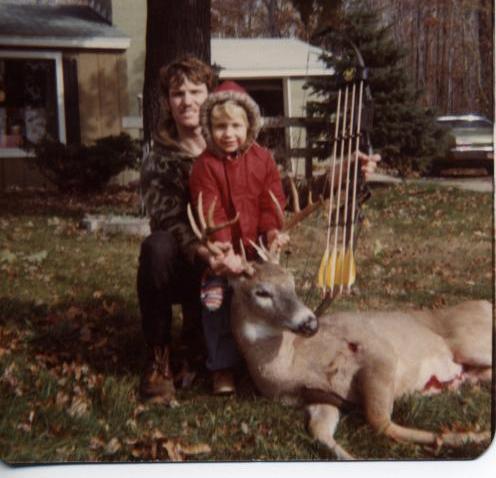 There was also an arrow wound on both rear flanks and after talking to my buddy, this was indeed the buck he had hit earlier in the season. When I got him to the house I took a picture of him with my curly blond haired son Jon and he was the talk of the store for several weeks as bucks rarely reached maturity in that area as it was likely the most heavily gun hunted county in the state of Michigan, which even back then had about a million deer hunters. It was pretty awesome.

This was the first of my current 26 ten point bucks and they’ve all been taken from public or knock on doors for free permission properties.

If you enjoyed Episodes #62 and #159 of the Wired To Hunt Podcast with John Eberhart, you’re in for a treat. Over the coming weeks, John has offered to share a number of his successful kill stories here on Wired To Hunt. Today John shares the story of his one and only Missouri buck kill, a story of serious perseverance in the face of adversity and tough conditions. – MK By John Eberhart In November 2004 I went on my one and only hunt to Missouri...

If you enjoyed Episodes #62 and #159 of the Wired To Hunt Podcast with John Eberhart, you’re in for a treat. Over recent months, we’ve been sharing a number of John’s successful kill stories and today we’re back with another. John’s detailed description of his hunts and plans offer a rare chance to get into the mind of one of the most seasoned and successful DIY bowhunters in the country. Take this opportunity to really process what he does and...

If you enjoyed Episodes #62 and #159 of the Wired To Hunt Podcast with John Eberhart, you’re in for a treat. Over recent weeks, we’ve been sharing a number of John’s successful kill stories and today we’re back with another. John’s detailed description of his hunts and plans offer a rare chance to get into the mind of one of the most seasoned and successful DIY bowhunters in the country. Take this opportunity to really process what he does and...