What You Need to Know about Hunting With Archery Equipment

The closest thing that the hunting world has to a rivalry is the ever-present tension between die-hard firearm hunters and archery purists.

The firearm folks will say that archery purists are sanctimonious blowhards who injure a lot of animals that are never recovered, while archery purists say that firearm hunters are afraid of a challenge and use technology as a crutch to make up for their lack of  skill. Obviously, each extreme is way off.  Just as pants and shorts both have their places in a person’s wardrobe, firearms and bows each have their own particular role in the arsenal of a versatile hunter who’s looking to maximize the amount of wild meat on his dinner table.

From a purely pragmatic standpoint, two of the most compelling reasons to take up bowhunting are to enjoy extended hunting seasons and to gain access to weapons restricted hunting areas. In Michigan, for instance, you can typically hunt whitetails with a bow for a total of 10 weeks per year. On the same patch of ground, you’re only allowed to hunt whitetails for two weeks with a rifle or shotgun and another 10 days with a muzzleloader. (If you choose, you can use your bow during the rifle and muzzleloader seasons as well.)

As for weapons-restricted areas, a bow gives you access to land that might otherwise be completely sealed off to gun hunters. Such areas are particularly prevalent in suburban landscapes where an errant slug or bullet might easily take out someone’s window, or worse. Think of such places as the greater Washington D.C. area and much of New York’s Long Island. But even rural and predominantly wilderness states have weapons restricted hunting areas.

In Missoula, Montana, there’s an archery-only whitetail hunt where you can kill up to five does during a season that lasts over four months. These deer permits are not available to rifle hunters, and much of the land is outright closed to firearm hunting because of proximity to residential areas. Oddly enough, there’s an archery-only duck hunt on a coastal refuge in the vicinity of Anchorage, Alaska. That alone should you make you a believer in archery equipment! 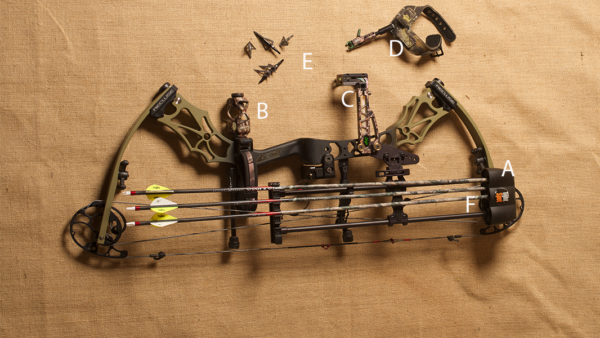 An Athens Recluse set at a draw weight of 70 pounds. This rig is a versatile hunting tool that can handle a wide variety of species under ever-shifting sets of circumstances – be it belly-crawling into a herd of javelina, sitting in a makeshift ground blind for elk, or perched high in a tree for whitetail deer.

Additional components
A: Quiver. Find one that holds your arrows securely and doesn’t add too much bulk to your bow.  For treestand hunting, some folks prefer a quick-detach model, so only the bow and nocked arrow are in hand while waiting on ambush.  This particular quiver is made by Tight Spot. It’s an excellent choice.

B: Stabilizer. As the name implies, this device stabilizes the bow as you shoot. Also absorbs some of the shock from firing the bow. This model is made by Action Archery.

C: Sights. Go with simple, tough setups that can withstand being banged and dropped. Don’t overcrowd the sight with too many pins, which can impair your sight picture.  This sight, the Schaffer Opposition, is an excellent choice.

What You Need to Know About Hunting Binoculars

Good hunting binoculars should provide you a crystal clear image of whatever you’re looking at, be it 10 yards away or 1,000. They should not fog easily. They should not cause your eyes to ache after a day’s use. They should be glare free, even if you’re using them in the evening when the sun is low to the horizon. They should provide an ample depth of focus, meaning you’re not constantly fussing with the focal knob every time a deer takes a few...

What You Need to Know About Hunting Packs

Of all the forms of hunting discussed in these pages, backcountry hunting is far and away the most physically and mentally demanding and also the most demanding on gear. Not only does the backcountry hunter have to hunt, he has to do it while balancing an extraordinary number of ancillary concerns ranging from where he’ll sleep to navigation to how he’ll avoid trouble with predators to how he’ll deal with the downed carcass of a large animal that...

What You Need to Know About Homemade Fire Starters

For a large chunk of the year, I live in a small cabin by the river. While it doesn’t have the comforts of running water or electricity, it does have a wood stove and solar panel to keep us warm and lit. In the summer and fall, I cook on an outdoor fire before moving back indoors to cook on the stove. All this to say that I light around three fires a day, so a quality fire-starter is a high priority in my life. Camp with a baby means daylight is...