The Beginner’s Guide To Bowfin Fishing

Over the years, I’ve found that anglers fall into one of three categories in regard to bowfin. They’re either pro-bow, anti-bow, or bow-curious. I’m so pro-bow I could be the president of the national bowfin fan club if such a thing existed, but I can’t say I’ve been a zealot my entire life. I only became bow-curious about seven years ago when a pro-bow buddy let me in on a local Jersey fishery practically in my backyard that I had absolutely no idea existed. It only took one fish to flip my switch. I loved the fact that bowfin are true natives, swimming here long before all the other popular gamefish. I loved that they’ve remained relatively unchanged since the time of the dinosaurs. But most of all, I just thought the fight was the shit.

Historically, bowfin populations were strong from central Texas north to Minnesota, and everywhere east of that line from Florida to Quebec. These days, there are pockets of bowfin—some large and some very confined—throughout that historic range. Habitat loss has played a role in this shrinkage, but so has the bowfin’s reputation of being a trash fish.

Because they thrive in weedy, mucky, mosquito-infested backwaters, the anti-bow crowd often views them as gross or icky, something you wouldn’t want to touch or have to take off your line. It’s not uncommon to see bowfins thrown on the bank to die in the name of improving the ecosystem or the well being of more desirable species. The irony is that a good bowfin population is a sign of overall watershed health; they may live in weed-choked coves, mud flats, spillways, and other less aesthetically pleasing areas of lakes and rivers, but where they don’t live well is in polluted water. The habitat they prefer is also vital for the safety of juvenile bass, pike, and panfish, so if bowfin suddenly disappear from a body of water, something could be up that spells trouble for other species.

Bowfin also have a reputation of being mean. That part’s true. It’s what makes them so fun to target. A bowfin will battle you from hook set to release. They have sharp teeth, incredible jaw power, and the ability to breath air, so they’re never really tired out and love to violently twist at the precise moment your camera timer is about to click for that selfie. Pound for pound, they’re stronger than smallmouth bass and a lot easier to catch than pike or trout. I don’t think I’ve ever posted a photo of a bowfin on social media and not been flooded with questions from the bow-curious about catching them. So, here’s a breakdown of the key bowfin facts, tackle, and methods that will get you tied into—and landing—bowfin the fastest. Maybe this tutorial will even convert a few anti-bows.

Swing Big The areas where I chase bowfins in New Jersey aren’t exactly a secret. Most of the time, I can bank on bumping into other swamp jockeys. Many of them have been at it for a while like me, but loads of them are just sort of poking around, trying something new, and have had limited success. The two most common phrases I hear from this casual group are: “I had one but it broke me off,” or “I got hit, but I didn’t get a good hook set.” Both of these issues are a product of being undergunned in the tackle department.

Bowfins have rock-hard jaws full of conical, needle-shaped teeth. To drive a hook into them you need to use force, and your generic outfit spooled with 10-pound mono or 15-pound braid likely will not have the strength, backbone, and shock absorption ability to do it effectively. That’s not to say you won’t get lucky, but it’s just not the best tool for the job.

I use 7-foot spinning rods designed specifically for catfishing. They’re extra-fast (if not downright stiff), but I know they’ll drive that hook like a hammer hitting a nail when I swing. I lean on reels suited for inshore saltwater fishing because they’re better equipped to handle 40-pound braid, which is my preference when bowfishing.

By The Nose There’s no doubt that bowfin are predators. They eat live prey, which means you can catch them on a wide variety of lures. The thing is, while having one blow up on a frog might be the more satisfying way to catch a bowfin, throwing artificials is not the most productive way to target them.

Bowfin don’t have incredible eyesight. Never in seven years of chasing them have I seen one come from 10 feet away to eat a lure. Most of the time, your fluke, chatterbait, or buzzbait has to practically bounce off their nose for them to snatch it. That nose, however, is highly tuned. While the bow-curious don’t often want to hear it, the quickest way to score one is with cutbait.

As with most cutbait fisheries, fresh, local offerings are always the best. In my area, that’s a piece of American shad when they’re running the Delaware River in spring, and trusty bluegill chunks the rest of the season. In some states you aren’t allowed to use gamefish as bait, so be sure to check the regulations before catching a bucket of bluegills. But really anything that lives in the same water as your local bowfins—from suckers to gizzard shad to carp—will get quickly sniffed out. 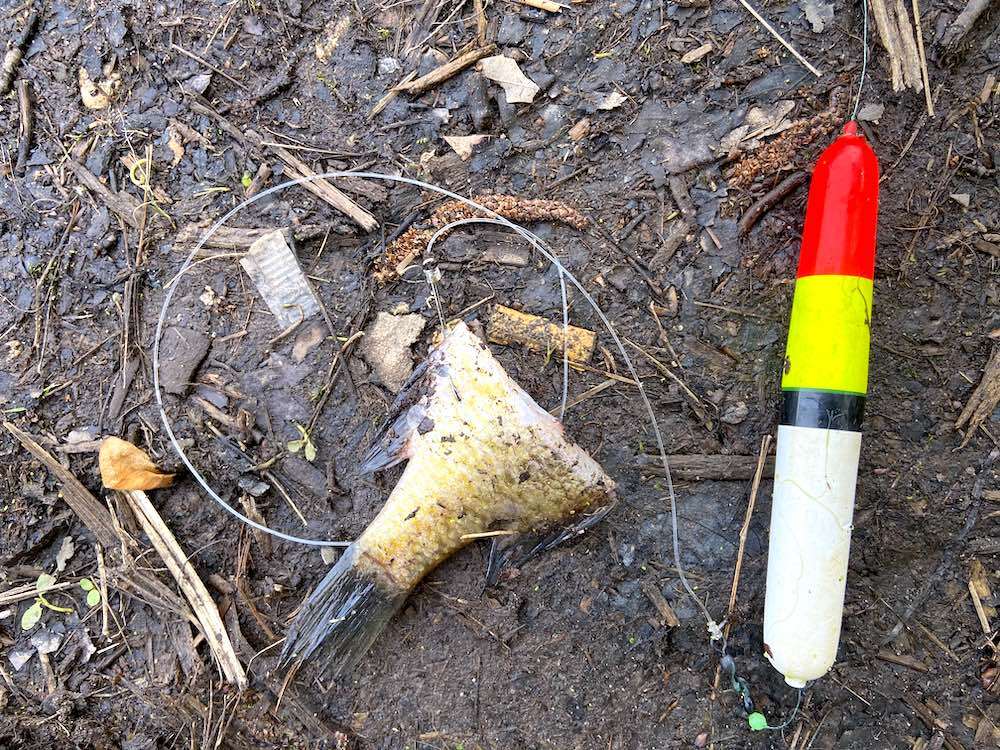 If you’re hard up for fresh bait, head to the grocery store. In a pinch, I’ve had pretty good results using fresh tilapia. Fresh shrimp can work well, too, though I’d rather spend that money to feed it to myself than a bowfin. Many fellow bow freaks swear by salty fish, such as mackerel and mullet, though I’ve had the least amount of success in my area using them for bait. It’s worth experimenting to see what consistently trips the trigger of your local population.

Rig The Game Get a bunch of bowfin-loving dudes together, and they’ll all insist their way and their rig to deliver cutbait is the best. Some tie their hook directly to their braid mainline; others incorporate steel leader into their rig. I’ve actually spent quite a few seasons dialing in my terminal tackle, and while my way certainly isn’t the only way, it’s the configuration I’ve had the most success with year after year.

The majority of the time, you’re going to be targeting bowfin in less than 10 feet of water—and, quite often, in a foot or less. Since the area you’re fishing will also likely have a soft, weedy bottom, bobber rigs are my preference over weighted rigs with sliding sinkers, as gear on the bottom tends to collect too much debris or stop a fish from being able to run with the bait without feeling resistance.

My ride-or-die bobber is a 5-inch unweighted Little Joe Pole Float. I rig it slip-float style with rubber stopper on my mainline. This allows me to quickly adjust depth as needed when changing locations. I’ve found that the light balsa wood pole float creates very little resistance when a bowfin is dragging it across the shallows, which gives the fish more time to chew and less chance of feeling any pressure.

I tie a 50-pound barrel swivel to the braid below the float, and to the other end of that swivel I tie a 16- to 18-inch piece of 40-pound fluorocarbon with a 3/0 baitholder or circle hook snelled at the terminal end. I find that snelling as opposed to using a clinch or palomar knot keeps the hook in better alignment with the leader, which provides more positive hook sets. 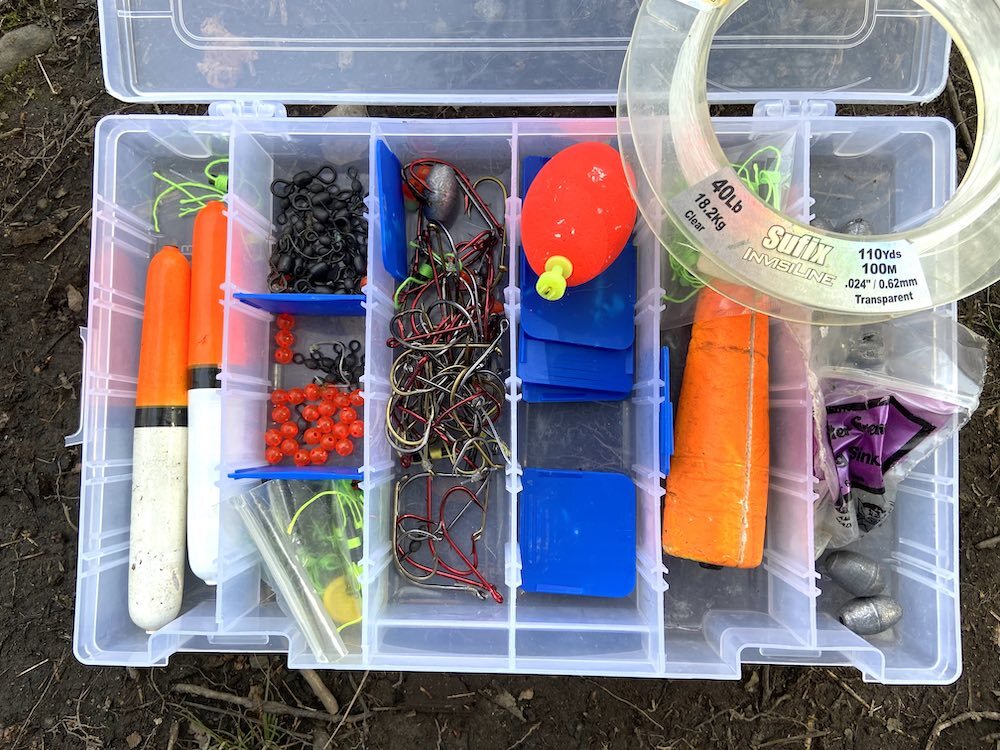 That 3/0 hook is actually one of the most important elements, because another common mistake I see—which contributes to the rookies breaking off—is using a hook that’s too small. Bowfin don’t inhale a bait like a flathead catfish. More commonly they pick it up and run, taking time to work the bait into their throats similarly to how gar feed. Their mouths are plenty big and can easily take down a 3/0. When you finally set, the odds are better that larger hook will pin just inside the jaw instead of deep in the throat. This has two benefits: you’ll be able to pop the hook out easily for a quick release, and there’s a better chance those teeth will be chomping on the hook instead of the leader, so you’re less likely to get bitten off.

Personally, I don’t like using steel leader, because I believe it makes the presentation less natural. I’ve tried it many times, and always get more pick-ups on fluorocarbon. You may have to change the leader after each fish because they will scrape and weaken it, but I’ve had very few bowfins bite cleanly through 40-pound fluorocarbon when paired with a big, strong hook. However, when a snapping turtle inevitably grabs your bait, it will be much easier to cut or break fluorocarbon than steel.

The Total Guide to Catching and Cooking Bullhead Catfish

Everyone loves an underdog. Whether we’re watching some low-ranked boxer or tennis player taking it to the world champion or some scrappy college team fighting their way to the top of the Pac 12, we can’t help but root for the dark horse and cheer for the unexpected. This inherent desire is deeply ingrained in us from the time we’re young, reading the stories of David and Goliath and The Little Engine that Could and watching those generic yet...

How to Set a Trotline

Simple is rare these days. With any kind of fishing pursuit, it seems like the gear list continues to pile up with new rods, reels, lines, and lures. I’ll be the first to admit it—the gear is part of the allure. But all of that clutter does have a tendency to remove us from reality a bit. We spend more time fiddling with accoutrement and less time studying our surroundings, taking a few mental (or literal) notes, and soaking it all in. That’s why...

How to Catch Spawning Walleye

I frequently refer to the spring spawning run as “the rut” of walleye fishing. This is the time of year when males and females cohabitate and let their guard down more than any other season. A few basic concepts are all you need to know in order to locate and catch walleyes during their spawn. When Do Walleye Spawn? Biologist and grizzled walleye anglers like to debate whether the walleye spawn is triggered by temperature or by time of year. At...