If you enjoyed Episodes #62 and #159 of the Wired To Hunt Podcast with John Eberhart, you’re in for a treat. Over recent weeks, we’ve been sharing a number of John’s successful kill stories here on Wired To Hunt and we’re back with more today. Here we’ve got a story from way back in John’s history – a 1975 hunt where he once again enjoyed the benefits of hunting in the rain. – MK

As far back as I can remember, even when there was no waterproof hunting clothing that was quiet enough for the up close and personal task of bowhunting, I hunted in the rain. In 1975 I began working at a sporting goods store that sold all the latest technology in hunting clothing and even then when it came to waterproof garments the only rainwear available had noisy nylon exteriors lined with stiff and uncomfortable PVC.

Due to the lack of adequate waterproof apparel, when I bowhunted in the rain, I chose to get wet. My typical bowhunting garb was a pair of cotton OD green work coveralls with military wool sweaters and other layering garments wore underneath in an attempt to keep warm.

During light intermediate rains or a steady drizzle I would stay somewhat dry and warm with my wool layering system, but during heavy rainfalls I would just sit there, take my I’m bulletproof medicine, and get cold and drenched to the bone and usually get sick and be stuffed up for the remainder of the season.

I was so engrossed in the mystique of bowhunting for whitetails that the thought of not going hunting, no matter the conditions, never entered my mind and I had taken a couple bucks in the rain and was definitely still hungry to learn as much about hunting in adverse weather conditions as possible.

On a Saturday morning in November 1975 my alarm went off and as I reached to shut it off I couldn’t help but hear the sounds of rain hitting the rooftop. It was the rut, I was worn down from working and hunting, and my thoughts of sitting in a tree for several hours in 40 degree temperatures and getting drenched were going to be realized very soon.

I opened the front door to check the wind direction and there was no wind as the rain was coming straight down. Having several rut phase morning locations to choose from, I chose one where if I received an opportunity and hit a buck poorly, he would still be relatively easy to find with no blood trail as long as I left him alone for a while to bed down and die.

This hunting site was at least a quarter mile from a tall marsh grass area with knee to waist high water and with what looked to be an all-day rain, I sure didn’t want a deer to reach that area, where with no blood trail to follow due to the rain, a visual recovery would be difficult at best.

This hunting location was rather unique as it was at a large red oak which served as a single tree funnel separating an old large mature white pine grove and a mature hardwoods consisting of mostly small pin oaks and tall ferns in which deer bedded in.

The bottom 10 feet of branches on the pines were dead and there were many years of fallen pine needles that blanketed the ground below them making the pines a quiet and desirable transition zone to pass through to access the mature timber, but not a desirable area to bed in due to the total lack of low security cover.

By the time I arrived at the red oak it was 45 minutes before dawn and I was already soaked from the waist down from walking through the wet ferns and weeds. I climbed up to my 18 foot perch and although oaks usually hold their leaves longer than most other trees, most of the leaves were down so I had to sit tight so as not to get picked.

By 8:30 I was soaked to the bone from top to bottom and starting to get cold chills. A couple does and a spike had came out the back side of the pines and crossed the smaller weed field at about 8:20 and other than that moment of excitement it had been a miserable morning.

At 9:10 a six point exited the pines and crossed the small weed field and I decided at that moment to stick it out until 9:30, which was about an hour and a half earlier than I would normally leave. I just didn’t think I could sit any longer than that because I was shivering so badly.

At 9:22 a very respectable eight point (for that time period) stepped out of the pines heading in my direction. Deer keep their heads low when walking in a hard rain to keep the raindrops from hitting their eyes which made it nearly impossible for him to silhouette me as he closed the 20 yard gap.

As he passed by at 5 yards I released a Bear X7 aluminum arrow tipped with a Bear broadhead from my Bear Polar II 60 pound bow. The arrow entered just behind the top of his right shoulder and the trajectory should have taken the arrow through the top of his right lung and center of his left lung.

He turned and ran across the small weed field and disappeared into the woods and I noticed he was not carrying the arrow. Anytime a deer goes over 100 yards, which he just did, I always question whether both lungs were hit. My adrenaline was pumping and my previous wet and cold discomfort was gone. Moments like this have proven to me beyond a shadow of doubt that anxiety and adrenaline levels can play huge rolls in keeping it together at crunch time, being patient, what a hunter does after a shot, and many other factors when it comes to up close and personal bowhunting.

I immediately knew that buck had to be given some time before a recovery attempt was made in case only a single lung was hit. I wasn’t very patient back then and after only an hour of sitting in the tree and getting cold again, I took up the search.

While not as hard, it was still raining and I got down, pulled the arrow from the ground and inspected it. The rain had not yet washed all the frothy blood from the arrow proving that at least one lung was passed through and there was no tallow on it and one of the blades was chipped from hitting a rib, all excellent signs.

I had made a good visual of exactly where the buck entered the woods and went right to that spot to start looking for blood and or search for a carcass. The buck was lying only 50 yards into the woods with his head up above the half dead and leaning ferns. He was looking at me while at the same time trying to get up. 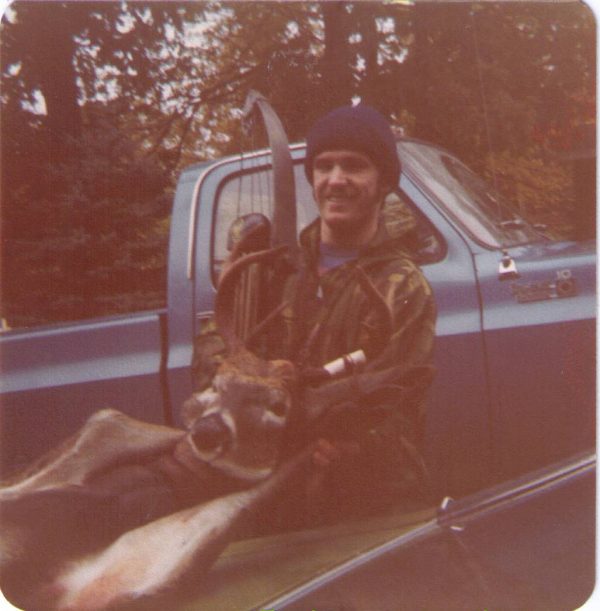 I moved closer, knocked an arrow and shot the buck again through the chest. His head went down and after several minutes he expired. To my surprise he had 3 small kickers tines near the base of his antlers making him a legitimate 11 point and he was my first ever buck with over 10 points.

Why Hunt In The Rain?

There is no question that my success rate percentages when hunting in rain are higher than during any other type of weather conditions and that my personal preference for hunting is during a light steady all day drizzle.

It’s my contention that mature bucks in heavily pressured areas feel more comfortable moving under adverse conditions than during pleasant weather when the woods is full of hunters. It’s so engrained into my thought process that I now check the weather forecast for inclement weather and hunt accordingly.

If you enjoyed Episodes #62 and #159 of the Wired To Hunt Podcast with John Eberhart, you’re in for a treat. Over recent months, we’ve been sharing a number of John’s successful kill stories and today we’re back with another. John’s detailed description of his hunts and plans offer a rare chance to get into the mind of one of the most seasoned and successful DIY bowhunters in the country. Take this opportunity to really process what he does and...

If you enjoyed Episodes #62 and #159 of the Wired To Hunt Podcast with John Eberhart, you’re in for a treat. Over the coming weeks, John has offered to share a number of his successful kill stories here on Wired To Hunt. And we’re kicking things off with the story and in-depth analysis of his 2016 hunt for an Ohio buck. Enjoy. – MK By John Eberhart Last year on the saddlehunter.com hunting talk forum, which is an interactive talk forum dedicated...