The Other Springtime Mushrooms

Morel mushrooms inspire hardcore hunters and fishers to turn gatherer for a short period of time each year. Outdoorsmen hit the woods in droves every spring to find this golden fungus because of its tasty flesh, but what these part-time foragers don’t realize is that they’re walking past all sorts of other delicious edibles along the way.

There are dozens of additional mushrooms available this time of year that taste damn good, but lack the same PR agent as morels. Here are five of my favorites, which you should keep an eye out for this spring.

If you’re new to mushroom picking altogether, make sure you check out our total guide to morel hunting, where we discuss when, where and how to find the most coveted fungus. 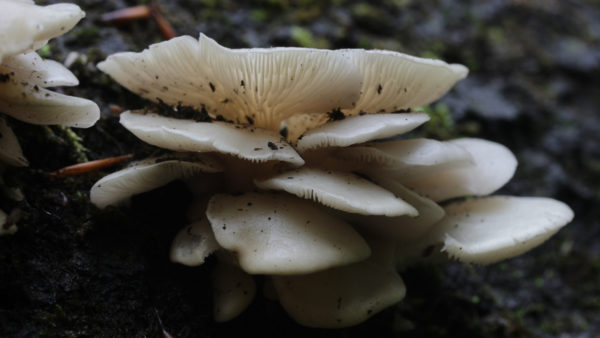 Oysters
Most would probably agree that oysters are the best mushroom, besides morels. They usually show up a little earlier than morels and stick around a little later. Similar to morels, they thrive in mild temperatures and rain. It’s like clockwork that oysters will appear a few days after precipitation in spring and fall.

Oysters always grow on wood, whether it be living or dead, but the best place to find them is on fallen trees along waterways. If you really like these mushrooms, you can actually grow them at home. Kits are available where you can buy wood that comes inoculated with oysters that should produce small batches each spring.

One thing that makes oysters so desirable is their versatility in the kitchen. You’ll find that a lot of Asian dishes utilize oysters, as their texture and flavor hold up well in stir fry. Their flesh is one of the cleanest in the mushroom kingdom, so there isn’t much prep involved to get these ready for the dinner table. 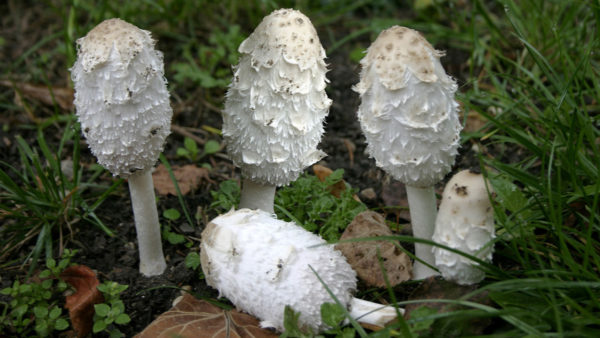 Shaggy Manes
Almost every time I tell someone about picking shaggy manes, I’m met with skepticism. These are one of the most common wild mushrooms in North America, which is why people are so surprised that they’re edible. Shaggy manes do well in high-traffic areas. Bike paths, backyards, ditches, parks and game trails are prime places to find these mushrooms.

They appear after rain and will grow all year long. One thing to note is their location, though. Since they grow around humans, think of any potential pesticides, herbicides or fertilizers that might have been sprayed near these mushrooms. Shaggy manes are kind of a biological sponge: They’ll soak up any chemicals in the area. That’s why I only pick shaggy manes out of ditches in early spring and prefer to harvest them in the wild.

Shaggy manes should be harvested when they’re completely white. If they start to “melt” and get a black goo around the cap, they won’t taste very good. These mushrooms are great served on a burger or steak, or in a pasta. 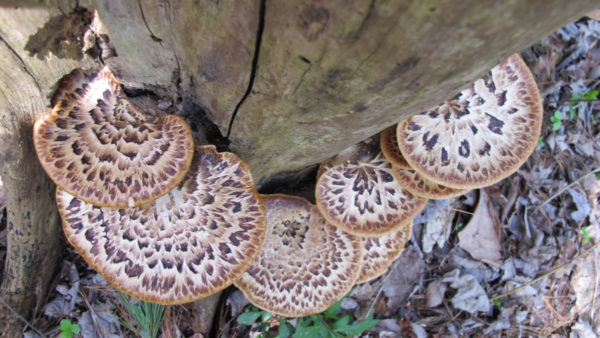 Pheasant Backs
These mushrooms go by a lot of names, including Dryad’s saddle and hawk’s wing, but my South Dakota roots bias me towards pheasant back. Whatever you call them, these are often overlooked by foragers.

Pheasant backs are best picked in spring and early summer but will be present all year. These only appear on trees and are most common on dead elms. Search for pheasant backs in the same habitat you would morels and expect to see more in the days after a heavy rain. 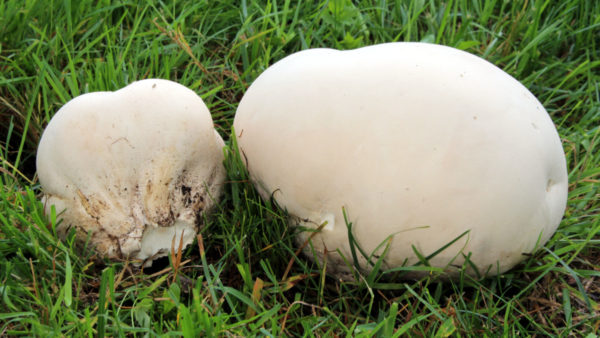 Giant Puffballs
Mushrooms often get their names based on what they resemble, and there isn’t a more accurate moniker in the mushroom world than “giant puffball.” These mushrooms resemble a baseball at their smallest, and a volleyball at their biggest (although legendary puffballs have been documented at basketball size).

Puffballs are the easiest mushrooms to spot in the woods (for obvious reasons), but it’s difficult to predict where they’ll be. Most folks seeking puffballs look for them in disturbed areas, similar to morels. I’ve found them in open pastures and dense forests, so there’s no telling where this fungus will show up.

These grow in spring and summer but are best when picked early. To tell if a puffball is good, cut it open and look at the flesh. All white is perfect, but any yellow, brown or purple indicates it’s too old. If that’s the case, kick the mushroom as you would a soccer ball and help it spread those trillions of spores inside.

Puffballs are often referred to as the “breakfast mushroom,” because they pair so well with omelets. I like them sliced thick and drizzled with oil on the grill, though. These are also a great substitute for any tofu recipe you might have, but if fake meat is your thing, I doubt you’re reading this. 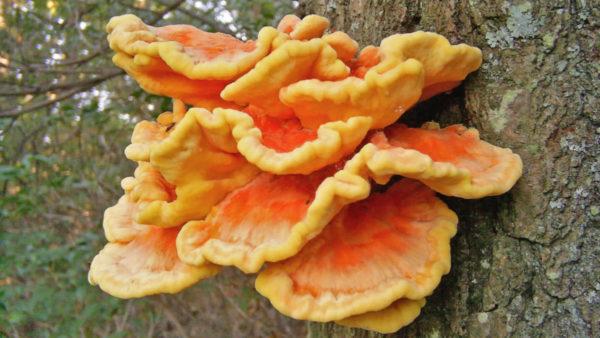 Chicken of the Woods
Chicken of the woods taste as good as they look. Although you usually want to steer clear of vibrant fungus, these mushrooms are an exception. They are most common in fall but can also be found in late spring across much of the country.

These shrooms exclusively grow on trees and are most likely to appear on trees that have recently died. They’ll grow in huge clusters, and it’s not uncommon to get 5 pounds or more off a single tree. The most difficult thing about harvesting these mushrooms is getting a cluster that is free of creepy crawlies. Chicken of the woods make for great homes for bugs and spiders, even small amphibians. I’ve found massive batches of these mushrooms before, but it wasn’t worth picking a single one because of insect infestations.

Chicken of the woods get their name because their colors are flamboyant as a rooster, and flesh can be a substitute for chicken. These are a preferred mushroom by non-meateaters, as the mushroom is often used in pasta and soup as a white meat alternative.

Just by learning about a few additional fungi, you can double or triple your mushroom harvest each spring. Once you start picking these other mushrooms, you’ll wonder why you hadn’t started sooner. They may not taste as good as morels, but not much else does.

The Total Guide to Pheasant Back Mushrooms

Some folks suffer from morel-induced tunnel vision during springtime foraging season. They’ll step over ramps and allow fiddleheads to go unpicked, but perhaps the spring edible most frequently encountered—and ignored—is the pheasant back mushroom. Also known as the dryad’s saddle, this beginner-friendly mushroom is abundant and easy to identify. It’s often passed over by foragers who dismiss them as being near-inedible—but that’s false and a...

How to Find Morel Mushrooms in Every State

Like most fungi, morels can be incredibly difficult to find. If you’re new to the mushroom hunting scene, make sure you check out our complete guide to morel hunting. If you already know the basics, then you’re ready for this regional guide. Our experts lay out the where, when and how for finding morels across the country. Hunting Morel Mushrooms in New England “Hunting morels in the Northeast is a practice in managing your expectations. Unlike...

Mushroom hunting runs deep in the outdoors adventure community. It’s a great way to get kids outside to learn about nature, and it’s a solid way to stock the food reserves. For me, there is nothing better than hiking through the woods, feeling the crunch of the duff under my feet, the wind on my face, taking in the smells as I scour the terrain for signs of fungi. It’s one of the most immersive and rewarding outdoors experiences you can have. I...